From Stock To Awesome In Just A Few Weeks 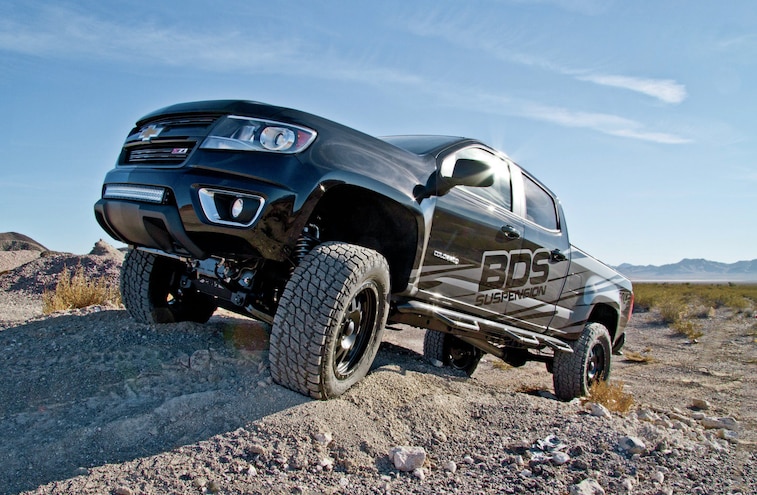 Building a project car is a long, arduous process. Unless you have a team of 15 and a television contract, most projects take months or even years before they’re ready to be shown off to the world. But sometimes, if you’ve got the right motivation (and some luck), months can be turned into weeks.
That was the case for BDS Suspension, who got their hands on one of the first production ’15 Chevrolet Colorados. After two weeks of measuring and prototyping suspension parts, the team at BDS decided to bring their lifted Colorado to the 2014 Specialty Equipment Market Association (SEMA) Show, just three weeks in the future. What’s more, the company wanted to drive the jacked-up pickup to the Las Vegas event from its Michigan headquarters, just to prove the truck was as reliable as it was attractive.
In the three weeks before SEMA, the BDS team had a clear set of objectives to accomplish with the Colorado. Foremost, obviously, was the prototype BDS lift kit. The goal was to produce a truck with at least 4 inches of lift that could accommodate 33-inch tires. The independent front suspension turned up to SEMA with a 6-inch lift, complemented by Fox 2 ½-inch remote reservoir coilovers. Fox 2.0 shocks dampen the leaf-sprung rear end, which has been lifted 4 inches. 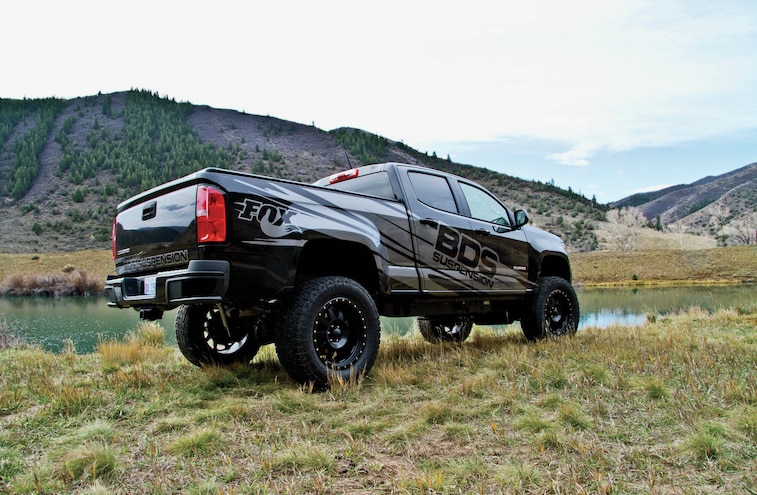 View Photo Gallery | 6 Photos
Photo 2/6   |   Bds Lifted 2015 Chevy Colorado Rear Three Quarter
Keeping the truck pointed in the right direction are one-off steering knuckles, which BDS assures will be replaced with aftermarket-friendly ductile iron castings as soon as they’re ready. Test-fitting parts like these usually takes months, but the BDS team got it done in weeks. While the lift kit and steering knuckles aren’t quite ready to be released to the public, BDS is confident it can get them in customers’ hands by springtime.

"The goal was to produce a truck with at least four inches of lift that could accommodate 33-inch tires."

Once there was some room under the truck, the BDS team mounted aggressive 35-inch Nitto Terra Grappler G2 tires on huge 20-inch Eagle Alloy 012 wheels. The combination required Eagle Alloy to custom-drill the wheels for the Colorado’s unique 6x120mm bolt pattern, but the payoff made that extra work worth it. Between the lift and the tire-and-wheel combo, this truck’s stance is just about perfect.
BDS also reached out to N-Fab, who crafted a sweet set of wheel-to-wheel side steps in just a few days, and a Rigid Industries 30-inch RDS LED lightbar was mounted to the Colorado’s lower grille opening for some extra off-road illumination. Magnaflow sent over a polished exhaust tip for the ’rado, and the truck’s shiny black paint was contrasted with matte grey branded graphics. An Extang SolidFold bed cover keeps the business end of the truck looking sleek, and finally, a BDS front full-width skid plate works with the lift kit to keep rocks from bashing the front differential. 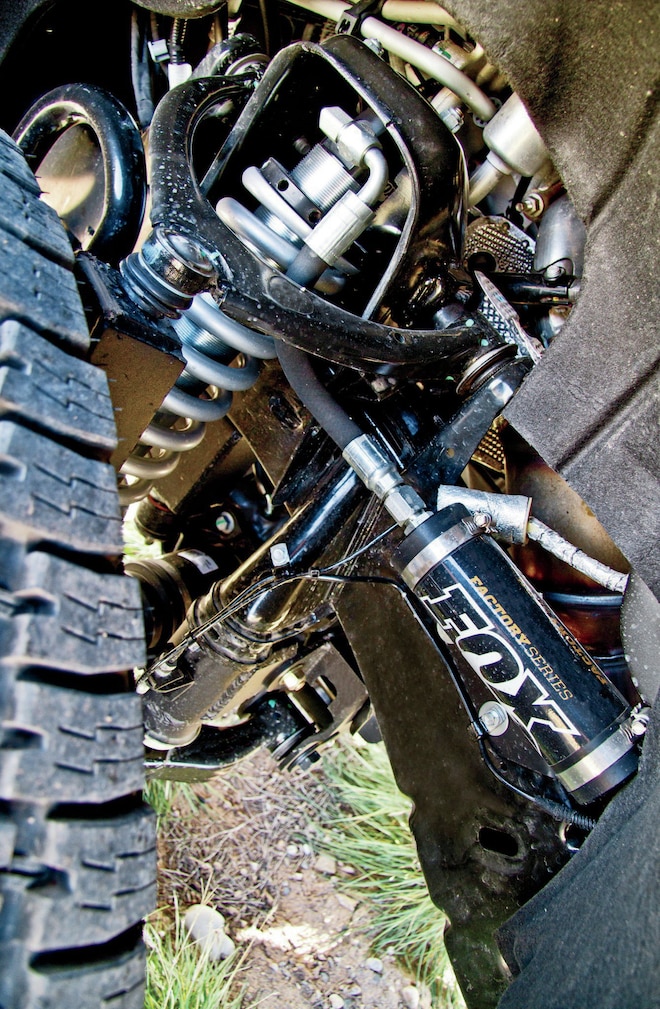 View Photo Gallery | 6 Photos
Photo 3/6   |   The truck’s prototype lift kit utilizes drop brackets and a custom steering knuckle to achieve the desired 6 inches of lift. It’s suspended by a set of Fox Racing coil-over shocks, and the front air dam has been removed for additional clearance.
In spite of the Herculean effort BDS expended getting the Colorado built in time for SEMA, the truck isn’t done. It’ll continue to rack up the miles to ensure that all of the parts are working well before they go on sale.
In the meantime, BDS will continue testing the truck both on- and off-road. Following SEMA, the prototype Chevy headed to a track in Arizona for Federal Motor Vehicle Safety Standard testing to ensure that the lift kit doesn’t interfere with the Colorado’s standard electronic stability control. That bodes well for shadetree mechanics that want their stance delivered with safety as well.
Overall, we really dig the BDS Colorado. We love its attitude, butching up the handsome Chevy very nicely, and all of the custom parts serve a clear purpose—something that can’t be said of many SEMA trucks. Prototype or not, this thing already has us dreaming about the mods we’d like if we had a Colorado as our canvas.

- OF
By Brett Evans
3 Articles