A whole new look for a Cummins-powered race car hauler 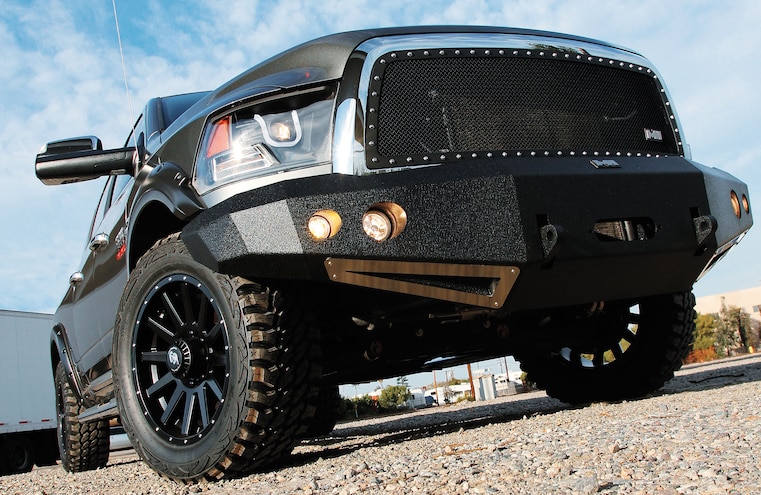 Our friend Mike Ellebrecht, also known as “Mopar Mike,” uses his ’12 Ram 2500 to tow an enclosed trailer loaded with his ’69 Dodge Dart drag car and plenty of spare parts. While the 6.7L Cummins-equipped rig’s performance has never disappointed Mike, he wants the truck to stand out from the crowd of other chromed-out stock Laramie editions on the roads of Southern California by blacking out some of the factory bling.
The Ram is a two-wheel-drive model and Mike wants no more than 2 inches of lift because, he says, “My wife already puts up with enough and doesn’t need the hassle of climbing up into a giant rig.” With this being the case, a traditional 4-inch-or-taller lift over 35-plus-inch tires is out of the question—but that doesn’t mean Mike is out of luck.
We contacted the folks at 4 Wheel Parts about transforming Mike’s truck in just a matter of days. The company specializes in upgrading trucks at 68 locations spread over 17 states, along with providing tons of parts online. With the help of Store Manager Marco Alvarez at the Redondo Beach, California, shop, we put together a lighting and appearance package that completely changes the look of Mike’s truck without sacrificing comfort or functionality. 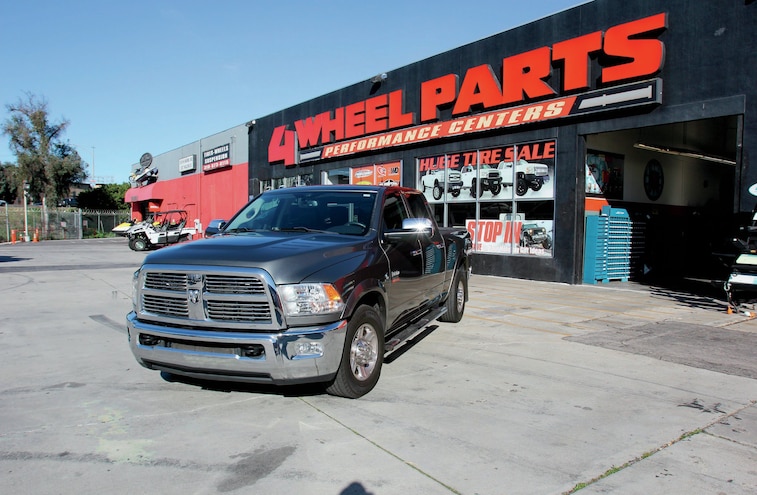 View Photo Gallery | 34 Photos
Photo 2/34   |   Before When “Mopar Mike” Ellebrecht first saw his ’12 Ram 2500 after its appearance transformation was complete, he was excited, saying, “Man, now it looks really tough! Not at all like before. Plus, it sits completely level, which is just what I wanted.” To get this aggressive look, the team at 4 Wheel Parts installed the full Smittybilt M1 line of upgrades (bumpers, grille, and fender flares), a 2-inch Daystar suspension lift, black U-Bar/LED front/rear lamps by Anzo USA, 20-inch Gamer 107 wheels by LRG Rims, and 33-inch Pro Comp Xtreme MT2 tires.
In fact, it actually rides better than before and should never be the victim of another bumper- denting parking lot hit-and-run. Explore the following photos and captions to learn how Mike’s ’12 Ram 2500 is transformed from looking like it just rolled off the dealer’s lot into an aggressive street rig after two full days of work.
After unbolting the tow hooks and bumper from the frame-mounted crash guards (seen here bookending the radiators) and unplugging the fog lamp wiring harness, Uriel gets some help removing the front bumper and setting it aside. The fog lamp wiring will be reused with the new Smittybilt front bumper.
After getting the help of two other technicians, Uriel is able to place the exterior section of the M1 bumper on top of the winch plate and install bolts without fully tightening them. Using three adjustable jacks, he positions the bumper so that all the body gaps and clearances match on both sides of the truck, then tightens all the mounting bolts. Next, the factory lamp wiring is used to power the four bright lamps integrated into the bumper.
After detaching the wires for the rear parking sensors and the license plate lamps, Uriel gets a hand from Service Manager Adolf Eudave while removing the rear bumper. Truck owner Mike Ellebrecht says the big dent in the passenger side of the bumper was a gift from a hit-and-run driver who didn’t bother to leave a note. 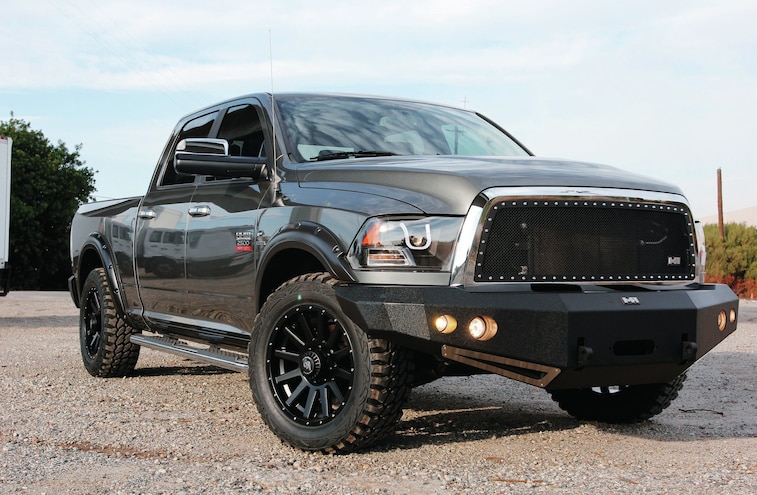