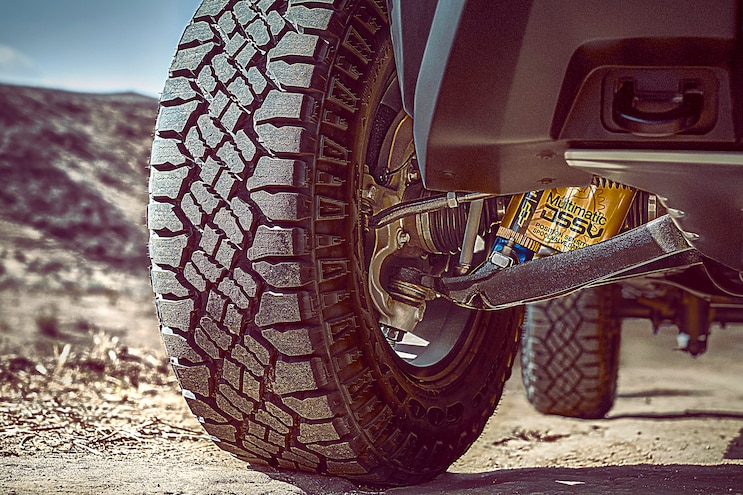 Suspension damping technology has remained relatively unchanged for the past 100 years. Conventional dampers (known to the layperson as shock absorbers) work by forcing a piston through a chamber filled with pressurized hydraulic fluid. Orifices in the piston direct fluid flow, while stacked washers, known as shims, control the rate at which the oil passes through. Throughout the years there have been advancements in shock absorber technology, but the basic theory has remained the same. Shocks can be commonly found in twin-tube and mono-tube, while racing applications have given us position-sensitive damping (also known as bypass, both internal and external), large-diameter bodies, and remote reservoirs. When Chevrolet set to engineering the Colorado ZR2, it could have easily tapped industry stalwarts Fox, King, or Bilstein. Instead, it commissioned the engineers at Multimatic, who were behind the revolutionary dampers used on the ’14 Camaro Z/28, to design and build the shock absorbers for the company’s new off-road warrior. 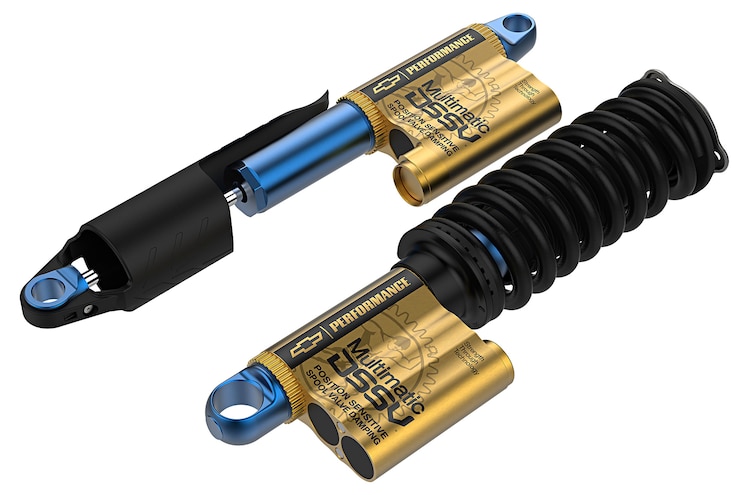 Multimatic is a privately held corporation based out of Ontario, Canada. The company provides many different parts to several of the OEs, including control arms for GM pickups, the tailgate step for Ford, and the tailgate damper assembly for Nissan and Toyota. Multimatic first designed the Dynamic Suspensions Spool Valve (DSSV) damper technology for racing applications in the early 2000s. The idea was simple: replace the traditional piston and shims with a pair of spool valves. Spool valves have been used for fluid control in hydraulic systems for decades but never before in a suspension damper. 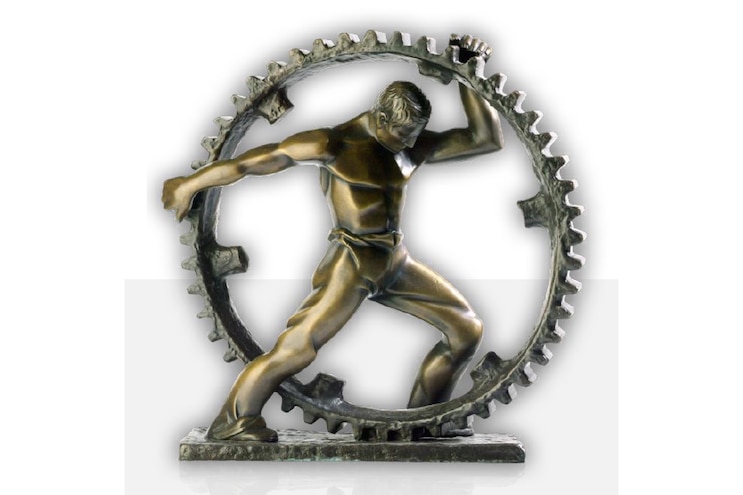 View Photo Gallery | 9 Photos
Photo 3/9   |   Zr2 Dssv Shocks Multimatic Statue
In 2002, Multimatic had its first racing success with the new DSSV technology with Newman/Haas Racing’s championship win in the open-wheel CART Series. From there, DSSV went on to be the series-mandated damper for the 2006-2007 Champ Car Atlantic Series, the US F2000 National Championship in 2007, and Indy Lights from 2015 until now. Most notable is that Red Bull Racing won its four consecutive Formula One titles (2010-2013) on DSSV dampers, and several teams continue to run them today.
The first General Motors application of DSSV technology was on the track-meets-street ’14 Camaro Z/28. When GM first approached engineers at Multimatic about doing a pickup damper, they thought they were being pranked. But as the realization set in that the Colorado engineers were indeed serious, the crew actually got excited and set to work. To date, the only road vehicles with DSSV dampers are the deMacross Epique GT1, Camaro Z/28, Aston Martin One-77 and Vulcan, Mercedes AMG-GT, Ford GT, and Colorado ZR2.

In Multimatic’s DSSV dampers, spool valves replace the traditional piston and shims. Each spool valve has a spring-loaded valve that opens and closes at a variable rate depending on the speed of the damper’s shaft. Further, the orifices in the spool valve can be adjusted, allowing engineers to make the dampers firmer or softer depending on the amount of force being applied to the spool valves. For example, the Keyholes (as Multimatic calls them) can be tuned so that under light pressure (such as cruising down the road) the dampers are soft and compliant, and then under heavy load (such as large bumps while off-roading) the dampers can firm up.
While velocity-sensitive damping is nothing new, spool valves offer a much higher degree of repeatability, predictability, and accuracy when tuning compared to traditional valve shim stacks. Since DSSV damping curves are predictable, they can easily be calculated using the math that governs hydraulic equations. This means that the desired damping curves can be calculated and executed without the extensive trial and error of typical shock tuning. Also, due to the flow characteristics of spool valves the shock’s oil viscosity has far less of an effect on performance, meaning that as the shocks heat up with extended use, their performance won’t degrade like a typical off-road race-type damper will.
In order to make the Colorado ZR2 equally as good on the highway as off, the team at Multimatic needed to create a DSSV damper that was not only velocity-sensitive but also position-sensitive. The answer to this riddle is what lies in the ZR2’s oddly shaped dampers. Multimatic moved the spool valves that control on-road ride into a chamber in the middle of the damper and placed a third spool valve on the shaft in the main body that handles extreme compression events. What it created is a bypass shock that doesn’t compromise on-road handling for off-road comfort.

How Well Do They Work?

We had the opportunity to take a very brief ride in the new Colorado ZR2 on a man-made track in the middle of downtown Los Angeles. Over the years, we’ve driven a multitude of vehicles with both internal- and external-bypass shocks. We’ve got to say, even with the limited wheel travel of the ZR2, the DSSV dampers work phenomenally well. They absorb big hits without any discomfort to the passengers while not creating any awkward vehicle movements. We still need more seat time before really casting judgment, but our first impressions are nothing but positive. Chevy went outside the proverbial box when designing the ZR2, and the choice to use DSSV over traditional dampers is sure to cause people to scratch their heads. However, we’re certain that once people get a chance to drive the truck for themselves, they’ll be left wondering where spool valves have been all of their lives. 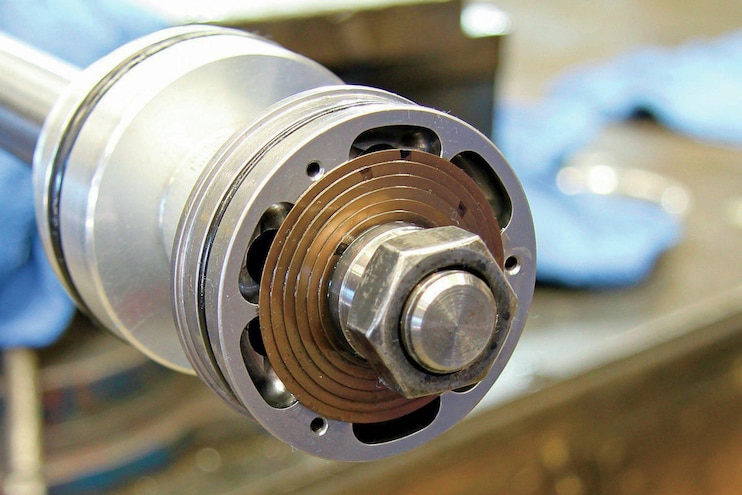 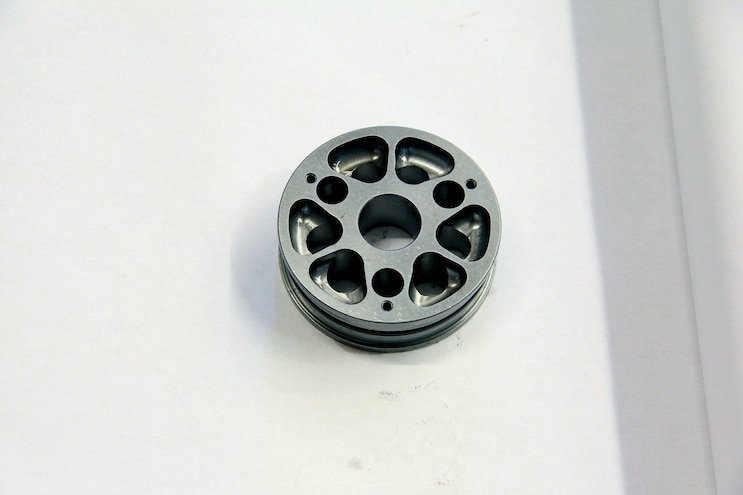 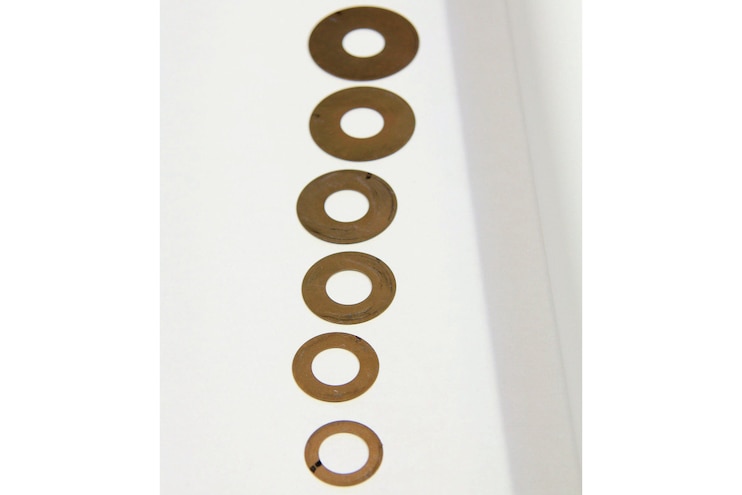 View Photo Gallery | 9 Photos
Photo 7/9   |   Traditional Shocks Offroad Shock Shim Stack
Seen here is a typical shock absorber piston and shim stack. This example is out of a King 2 1/2-inch damper, however it is typical of all shocks. Damping behavior is determined by the diameter and thickness of the shims. Oil flow through the piston orifices is controlled by the deflection of these washers. And the diameter and thickness of the shim determines how much it deflects under the pressure of the passing oil. 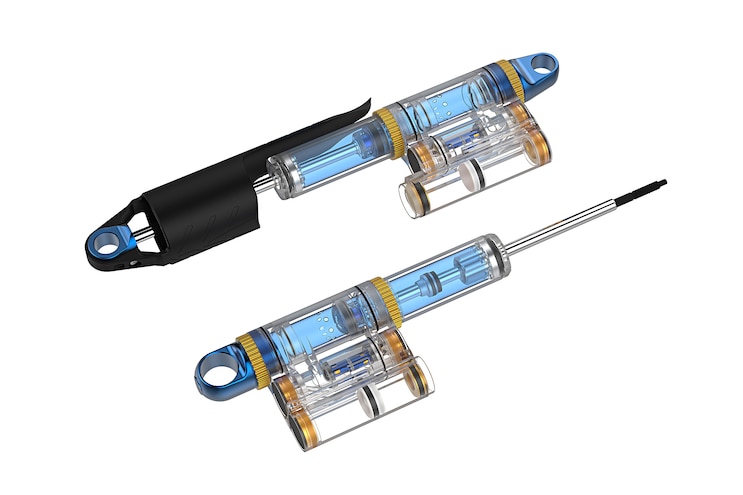 View Photo Gallery | 9 Photos
Photo 8/9   |   Zr2 Dssv Shocks ZR2 Multimatic DSSV PSD
The Multimatic DSSV dampers on the Colorado ZR2 are unlike anything seen before. These shocks have a main body where the shaft rides and the extreme compression spool valve is housed; a middle chamber that houses the on-road compression and rebound spool valves; and a third chamber that acts as a fluid reservoir and separates the nitrogen charge from the hydraulic fluid. As the piston moves through the on-road zone, oil is forced into the spool valves housed in the middle chamber through special orifices in the body. When the shock is compressed outside of the normal zone, the third spool valve mounted on the shaft takes over damping duties. And during extreme rebound situations, such as having the wheels off of the ground, a special rebound valve at the base of the main body controls the motion. All of this combines to create a damper than works exceedingly well on the highway and in the dirt, with almost no compromise. 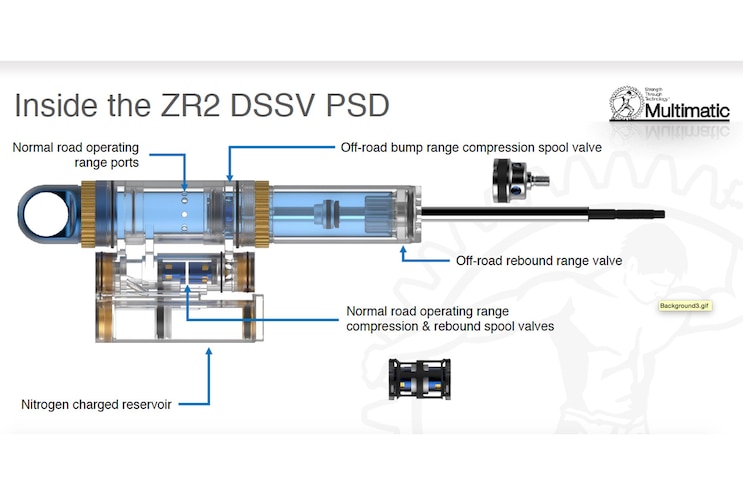