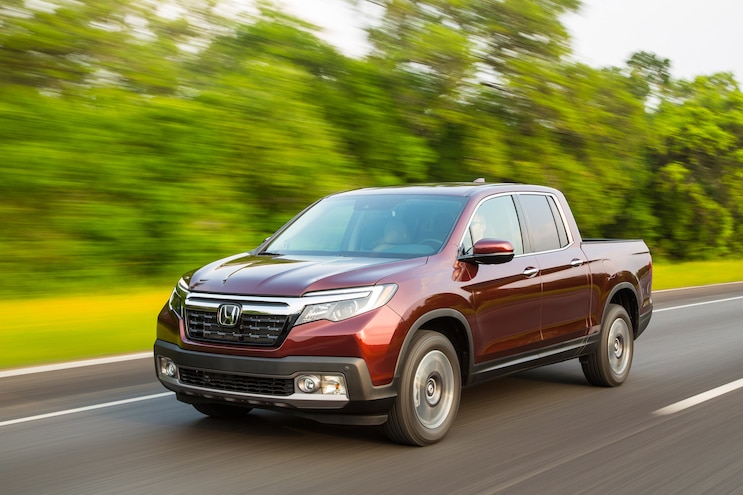 Conventional wisdom says a unibody vehicle doesn’t have a frame and that underneath they should be similar to passenger cars. Yet the ’17 Honda Ridgeline, the only unibody pickup in the United States, has a frame, and it is quite possibly the most interesting engineering feat in years. 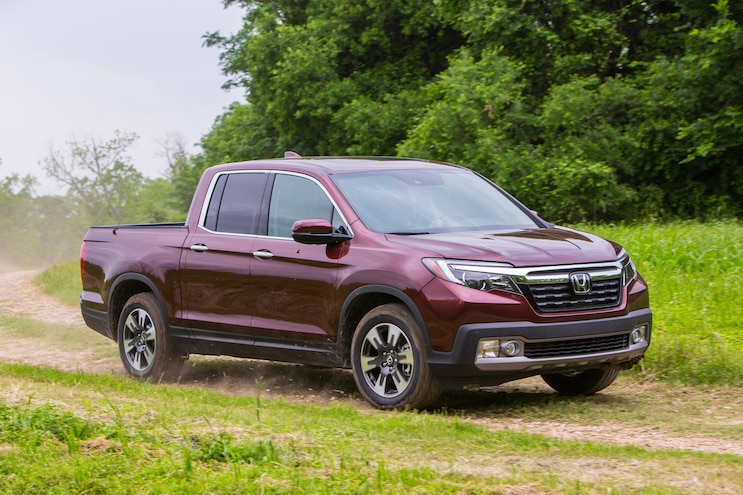 View Photo Gallery | 6 Photos
Photo 2/6   |   Honda Ridgeline
“From the front of this vehicle to the back, we have framerails, just like any other truck would have,” says Kerry McClure, Honda chief engineer for the Ridgeline. “The body itself—instead of being bolted onto that framerail structure—is integrated so the floor panel sits on top of it and it is all welded together.” That’s right, the Honda Ridgeline utilizes boxed framerails in a “three-bone” or “y-bone” configuration underneath the unibody. 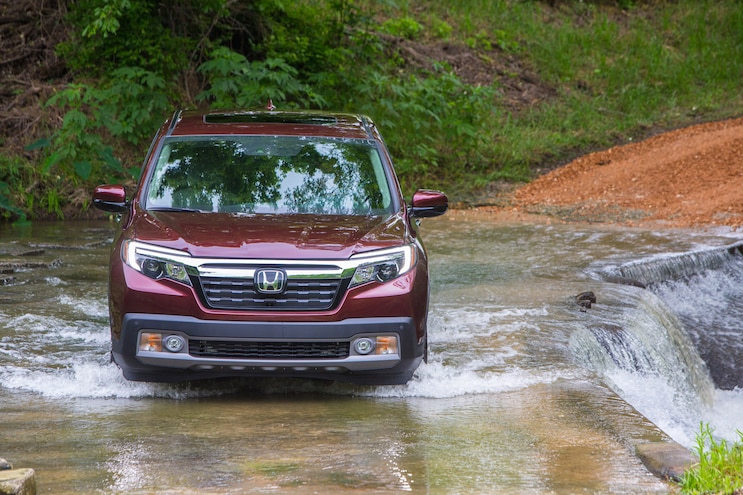 View Photo Gallery | 6 Photos
Photo 3/6   |   Honda Ridgeline In Water
What’s the big difference between a body-on-frame and a unibody welded on rails? In the case of the Honda Ridgeline, it is how it is attached. A traditional body-on-frame pickup body is bolted to the frame with rubber bushings separating the two pieces, with the bed and cab being two separate entities. This helps with noise and vibration reduction for the cabin, but the rubber-bushing layer reduces the rigidity of the vehicle as a whole.
With a unibody cabin and bed welded to the framerail structure, one might assume that if you overload the bed, it might bend the truck in half due to the weight. This has largely been a benefit of a body-on-frame design—it allows more flexibility and for the cabin to torque. McClure says Honda has additional engineering to prevent that. 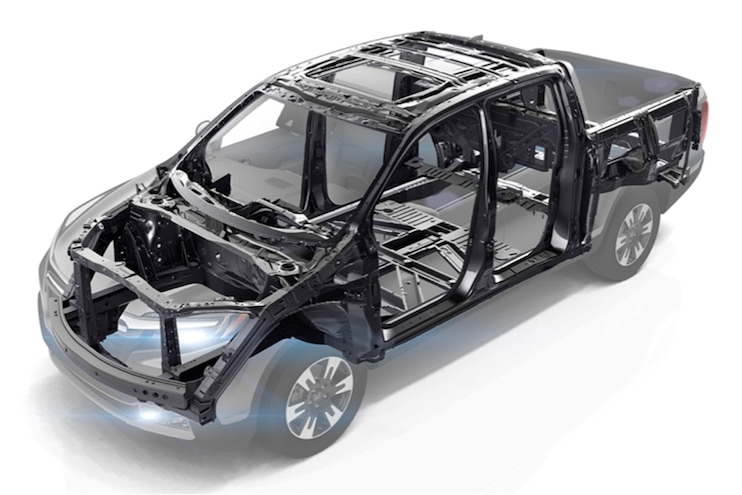 View Photo Gallery | 6 Photos
Photo 4/6   |   Honda Ridgelines Frame Front
“In the bed, there is a truss-like structure that connects the side of the bed to the cabin,” McClure said. “It isn’t just supported by the frame on the bottom like a traditional body-on-frame would be. We have additional structure that goes up the sides and provides more structure than a traditional truck would have.”
What about the buttress support found in prior generations? McClure says the framerail structure and truss-like bed structure allowed Honda to drop the buttress. Further helping rigidity is another piece of engineering between the cab and the box. 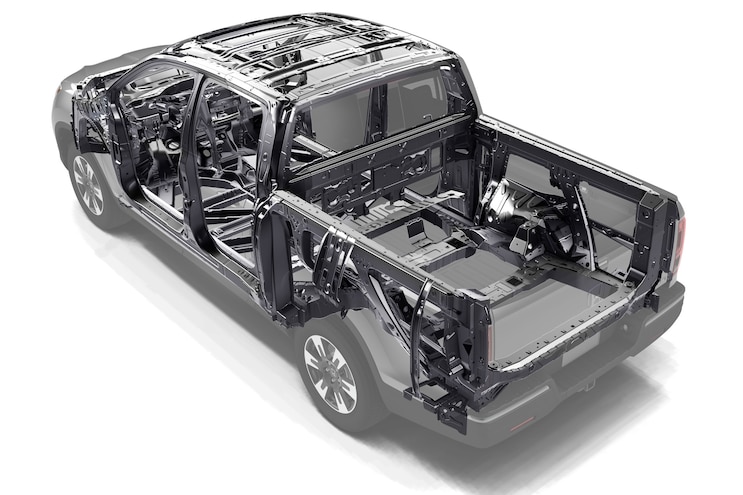 View Photo Gallery | 6 Photos
Photo 5/6   |   Honda Ridgelines Frame Rear View
“The back of the cabin has a solid piece of metal that attaches to the bed,” McClure said. “If you think of an open box, it is easy for it to tilt left and right. If you close one end of that, it provides substantial rigidity to that box. The box of the cabin provides additional rigidity to the box and the fact the sides of the cabin are also attached to that same panel provides additional rigidity and torsion control.”
The solid metal back panel in the cabin also acts as an additional safety feature, which was discovered during crash testing. Basically, if you have a load of bricks in the bed and get into a front collision, the bricks could fly through the rear cabin like missiles. With the solid metal plate, the bricks wouldn’t enter the cabin. This type of intrusion simulation is a European crash safety test that isn’t required in the U.S.—for now, at least. 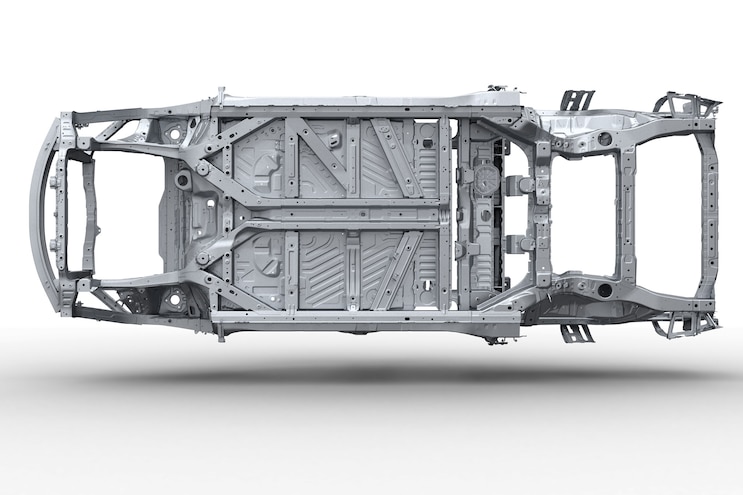 View Photo Gallery | 6 Photos
Photo 6/6   |   Honda Ridgelines Frame
McClure says Honda did the test to make sure its stated payload stayed in the bed and out of the cabin and did the test for themselves. He can’t speak to other truckmakers’ products, but it is a test Honda engineers borrowed from passenger cars to make sure the seats are strong enough to keep whatever is behind them from coming through.
From stopping your payload from entering the cabin to providing a smooth ride by rethinking how trucks are built, Honda’s engineering on the new Ridgeline pickup has been well thought out. It is a radically different way to look at trucks in general and it will be interesting to watch if their “y-bone” frame turns into a game changer other manufacturers may adopt.