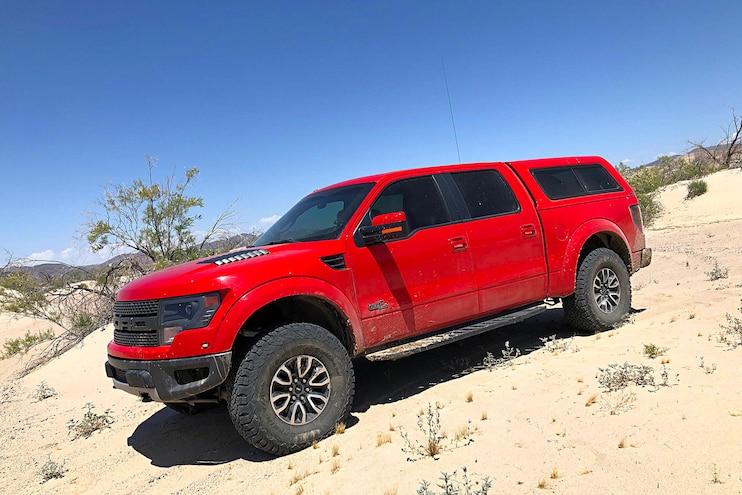 The Ford SVT Raptor was the first production pickup built to tackle the untamed desert of the Southwest United States and Baja, Mexico. Until its debut in 2009, the Ford Special Vehicles Team (SVT) was all about high-performance street machines, so this was new and exciting territory. Ford engineers did an impressive job, and the truck proved to be a wild success. Through the years, as owners pushed their first-generation SVT Raptors to go faster and faster, they quickly found the limit of the factory components.

Enter ICON Vehicle Dynamics, a company that is intently focused on high-end, high-performance suspension systems. Seeing these shortcomings and the rabid desire of Raptor owners to go further faster, the team at ICON has brought to market a line of products aimed at doing just that. Best of all, they didn't just do it for Raptor but instead offer a full line of high-performance suspension systems for nearly every pickup and SUV on the road today.

When we set out to improve our 2013 SVT Raptor, we knew ICON was the crew to talk to. And because we felt what was a failing factory front shock and worn-out ball joints, we opted to start at the front and work our way back. We replaced the factory 2.5-inch internal bypass Fox coilover shocks with ICON's true 3.0-inch coilovers and pitched the worn-out upper control arms in favor of the company's machined billet-aluminum pieces with their proprietary Delta Joint ball joints.

View Photo Gallery | 24 Photos
Photo 2/24   |   The morning after installing ICON's billet upper control arm and 3.0-inch coilover shocks on our 2013 Ford F-150 Raptor, we set out on a 500-mile (250 off- and 250 on-road) test to see just how well they would perform. The results were an unbelievable night-and-day improvement over the already outstanding factory suspension. 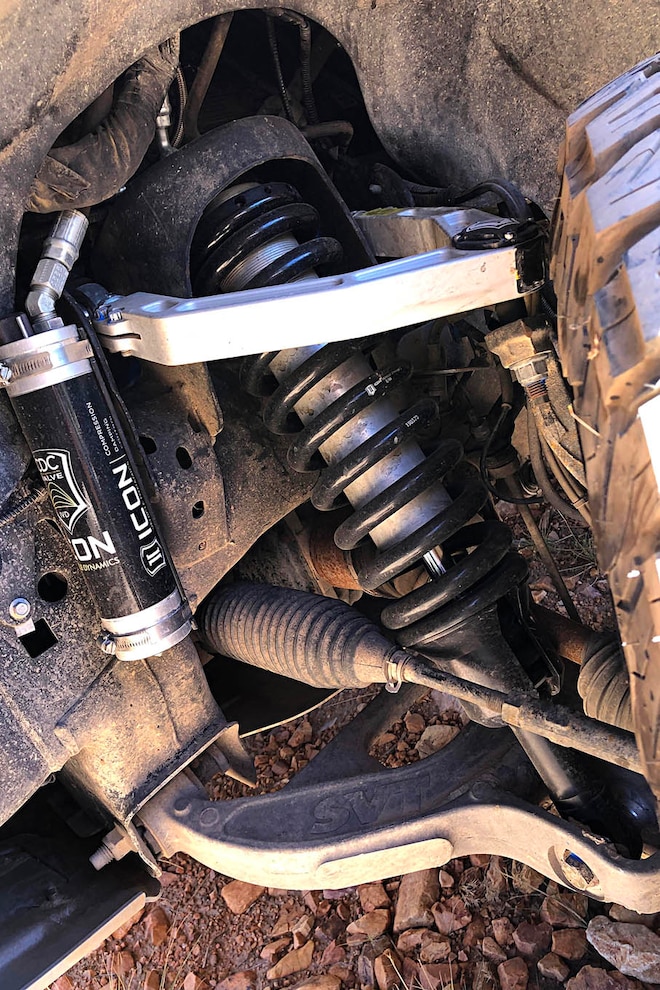 After working through the install, which took about a day in our driveway working with basic handtools (not needing a shop to do the work is a definite bonus), we hit the desert for a quick test run. The improvement was immediate and stunning, with the truck now able to attack larger whoops and washouts with nary a care in the world. Stutter bumps were tamed, and we no longer cringed at large hits and G-outs. On-road ride and control was lightly improved as well. 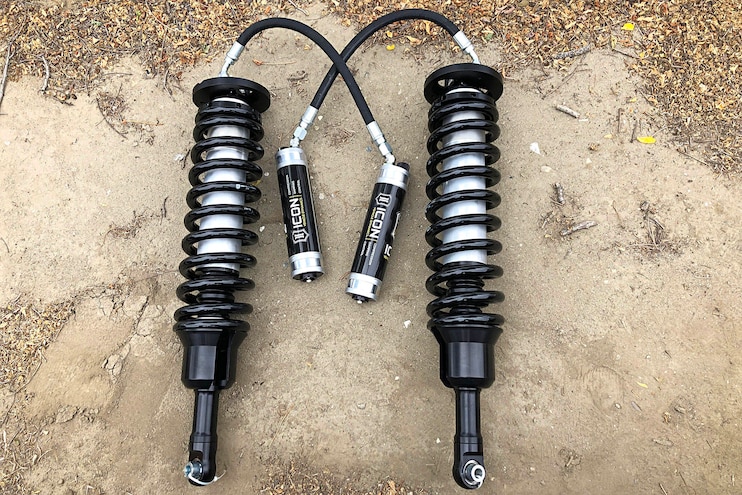 View Photo Gallery | 24 Photos
Photo 4/24   |   Replacing the Fox 2.5-inch internal bypass shocks are a set of ICON's 3.0-inch remote-reservoir coilover shocks. These shocks utilize a full 3.0-inch piston with digressive rebound valving and a flutter stack on compression. They also feature an internal hydraulic system (similar to an external hydraulic bumpstop) during the last 40 percent of suspension travel for the best bottom-out control. And for the ultimate in adjustability, ICON includes its Compression Damping Control Valve (CDC), which is an external compression adjustment with 10 settings, from soft to firm. 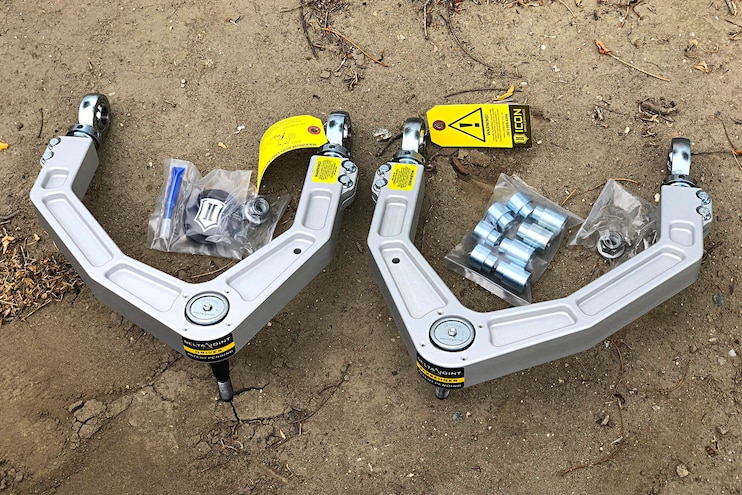 View Photo Gallery | 24 Photos
Photo 5/24   |   Other than limiting suspension travel and having a ball joint that's prone to wear, the factory Raptor control arms are perfectly adequate. ICON, however, offers a billet-aluminum replacement that eliminates potential binding while also providing clearance for the larger coilover shocks. The standard ball joint is replaced with ICON's Delta Joint, and FK Heim joints take the place of rubber bushings. The arms are CNC-machined from 6061 aluminum for the ultimate combination of weight savings and strength. 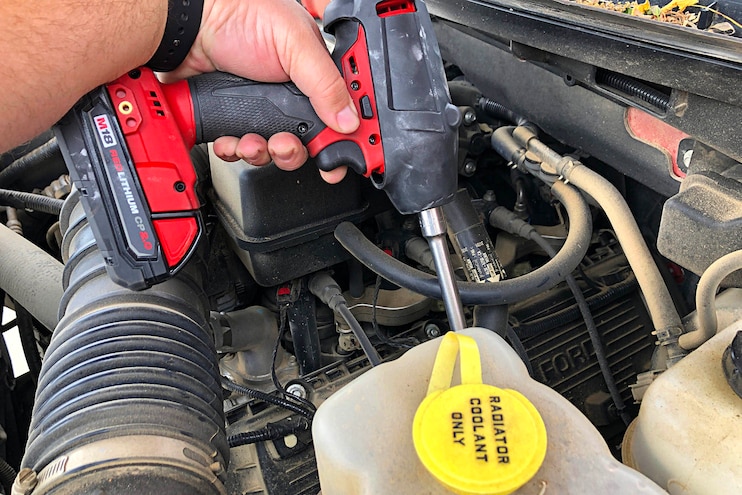 View Photo Gallery | 24 Photos
Photo 6/24   |   We began the installation process by removing the three nuts on the upper retaining ring of the factory shocks. These bolts are best reached from the engine bay with a long socket extension. Pay close attention to only remove three small nuts from the outer ring. If you accidentally remove the large center nut, the coil spring will violently separate from the shock body. You've been warned. 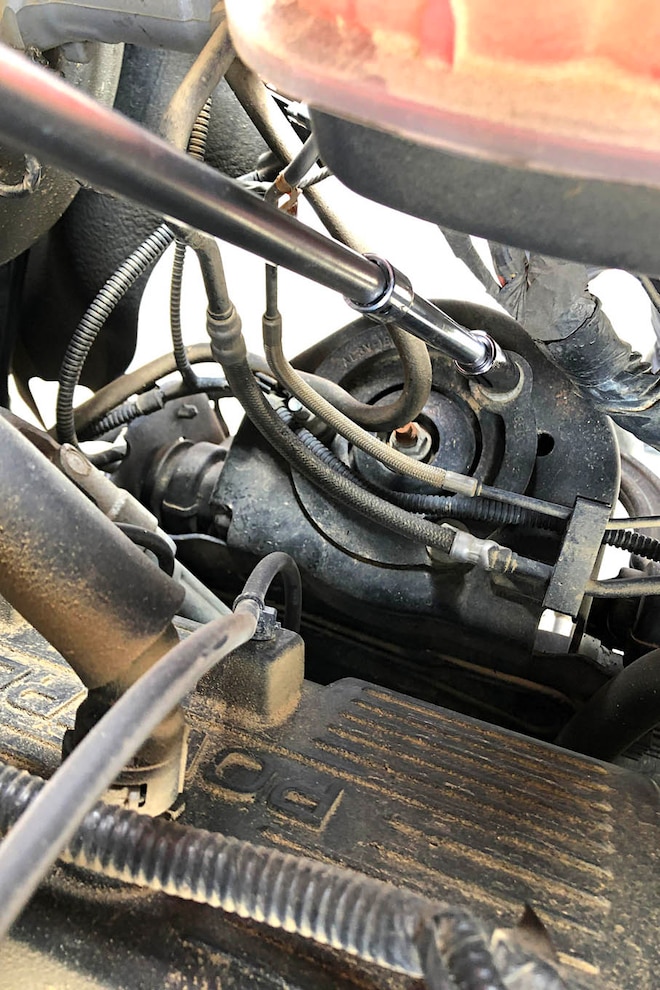 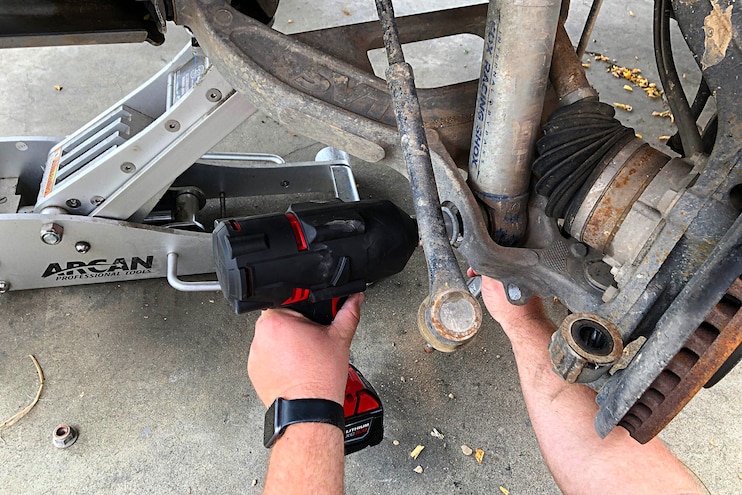 View Photo Gallery | 24 Photos
Photo 8/24   |   The lower bolt is torqued very tightly from the factory and requires a large breaker bar (or powerful impact) and a 30mm socket to remove. At this point, we had also removed the steering tie rod from the knuckle, along with the upper ball joint, and disconnected the sway bar. Once the lower bolt is removed, the factory shock slides up and out. 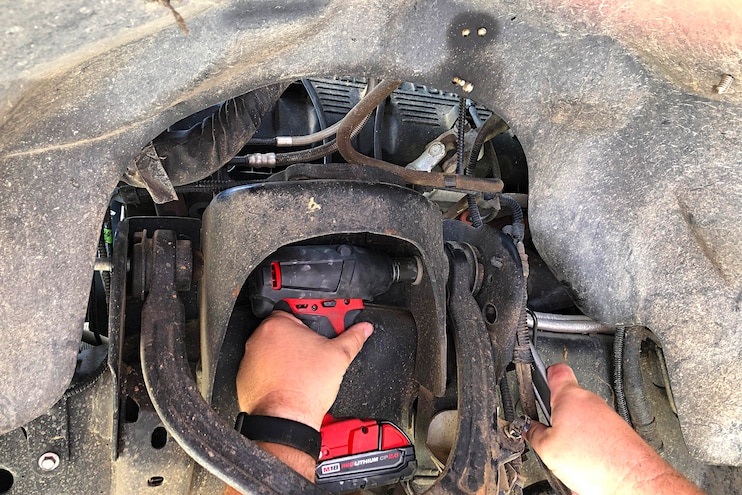 View Photo Gallery | 24 Photos
Photo 9/24   |   With the factory shock out of the way, we turned our attention to the upper control arms. Due to the direction of the bolts (nuts on the outside of the coil bucket), the arms cannot be removed with the shock in place. 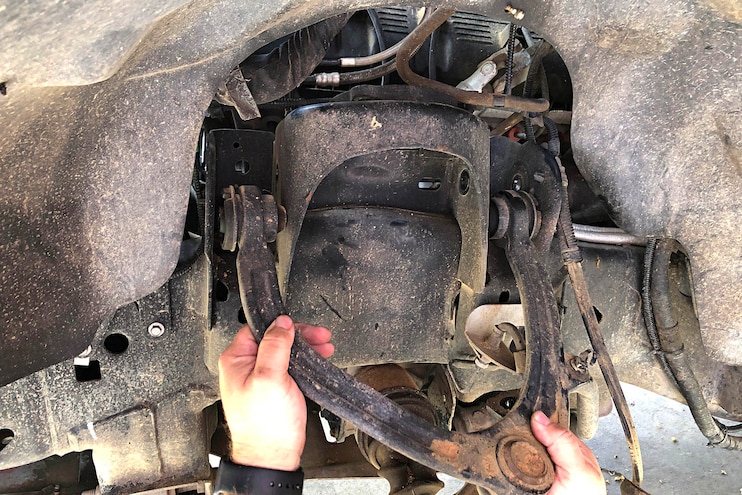 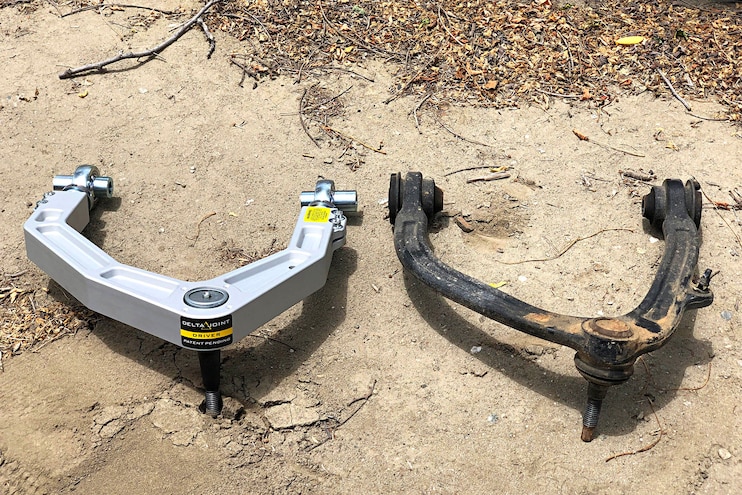 View Photo Gallery | 24 Photos
Photo 11/24   |   When placed side by side, the differences between the factory control arm (right) and the ICON arm (left) become apparent. Unlike the factory ball joint, the ICON Delta Joint is greaseable and replaceable. Practical functions aside, they look pretty sweet. 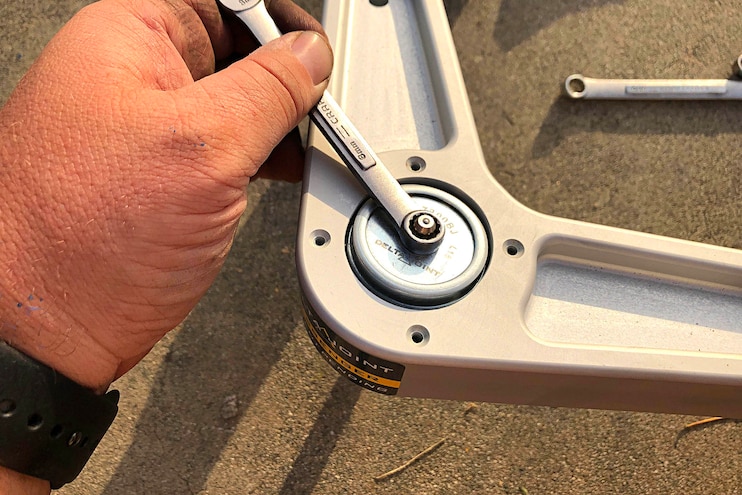 View Photo Gallery | 24 Photos
Photo 12/24   |   The Delta Joints came with needle Zerk fittings installed from the factory, however, we chose to swap those out to standard Zerk fittings ICON included with the kit to better match the rest of the truck. There's no right or wrong Zerk fitting to use as long as you don't forget to add grease. 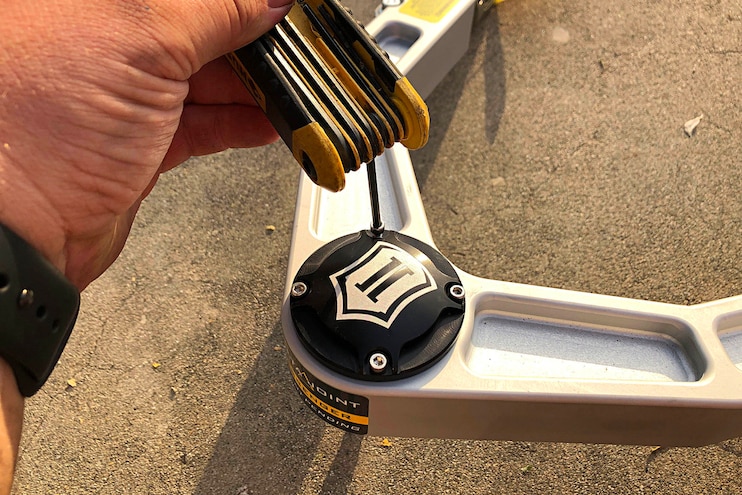 View Photo Gallery | 24 Photos
Photo 13/24   |   To protect the Zerk fitting and offer a finished look, ICON provides these nifty dust caps. The caps attach with internal hex (Allen) screws and feature a rubber O-ring to keep the elements at bay.

View Photo Gallery | 24 Photos
Photo 14/24   |   Another profound feature of the ICON billet control arms is the ability to adjust both caster and camber with them. Ford F-150 pickups typically use the lower control arm for alignment adjustments and, by adding the ability to adjust the upper arm as well, it brings a new dimension of adjustability not possible before. Because of the dual-sleeve design, these adjustments can be made without removing the arm from the truck. 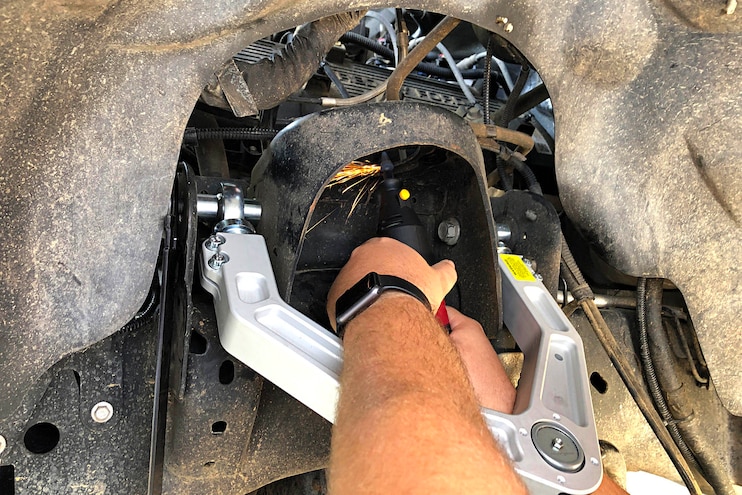 View Photo Gallery | 24 Photos
Photo 15/24   |   After loosely bolting the control arm to the truck (though this step can be performed at any time), we turned our attention to the slight bit of clearancing required for the new 3.0-inch coilover shock. Because the reservoir hose exits the top of the shock body, approximately an inch of material needs to be removed from the rear of the internal opening in the coil bucket. 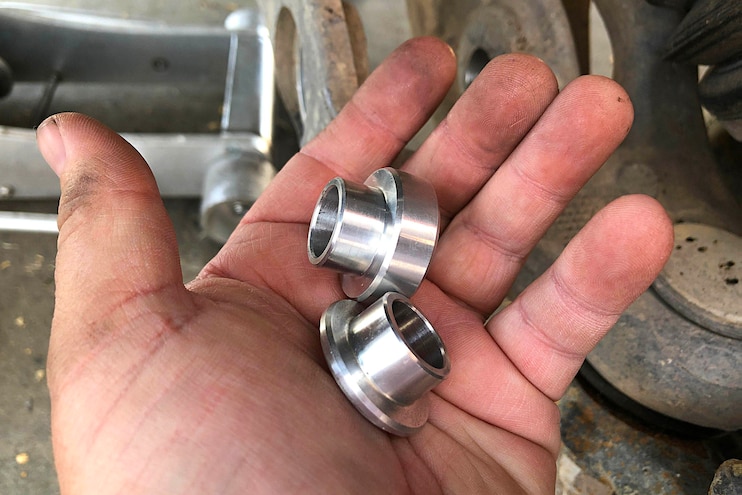 View Photo Gallery | 24 Photos
Photo 16/24   |   To complete the swap from the factory shocks to the new ICON units, special misalignment spacers are used in the lower control arms to position the new shock and narrow down the holes for the new mounting bolts. The position of the spacers is critical, as the larger one serves to push the shock body away from the front axleshaft. 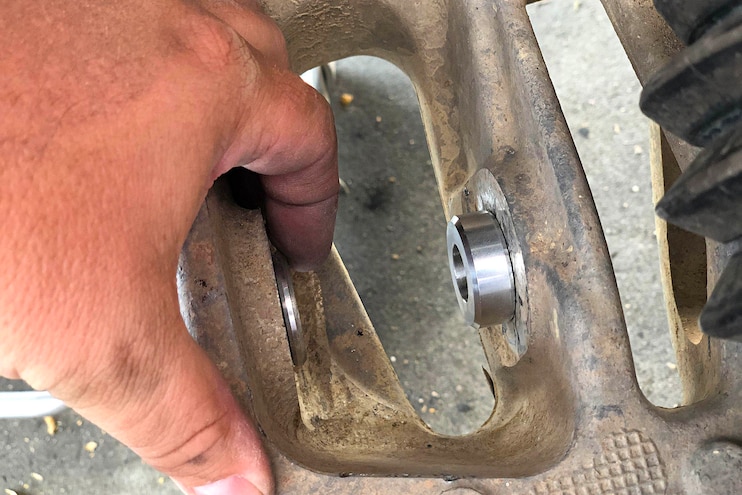 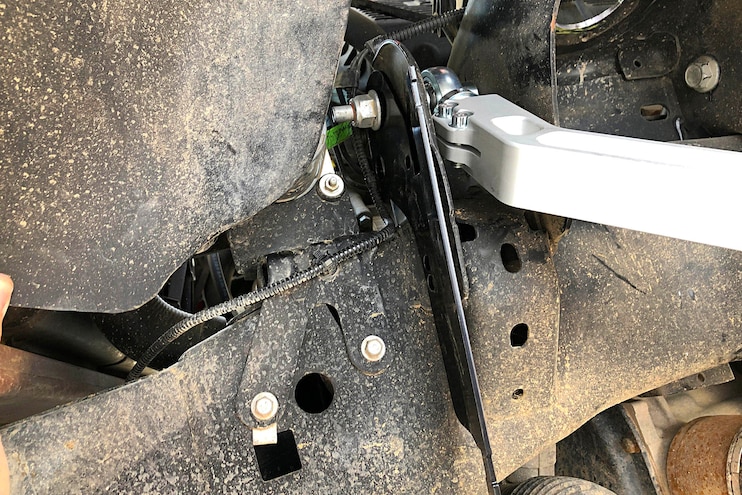 View Photo Gallery | 24 Photos
Photo 18/24   |   Because the factory Fox shocks had an internal reservoir, there is provision in place for an external version. ICON provides this formed bracket that attaches to the forward control arm bolt and places the reservoir vertically in front of the suspension. Be sure to leave the control arm bolts loose until after the coilover is installed, then torque to spec. 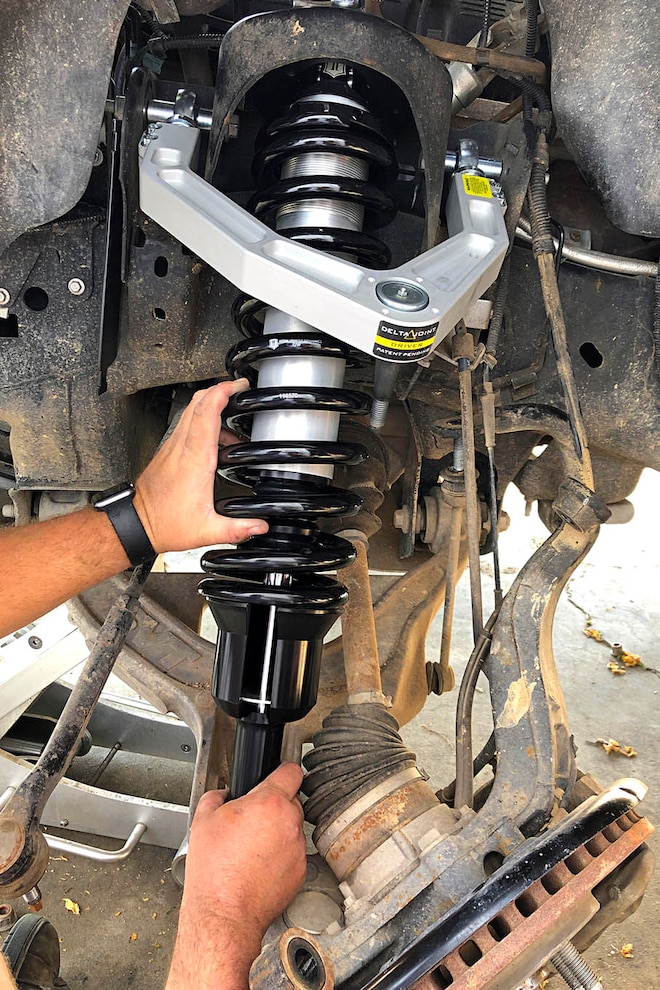 View Photo Gallery | 24 Photos
Photo 19/24   |   Due to its sheer size, getting the new 3.0-inch ICON coilover into place is a tricky task. The reservoir and hose must first be fed through the inner hole in the coil bucket and out of the way, into the engine bay. Next the shock is lifted into the coil bucket before being lowered into the lower control arm mount. If you have a buddy, this is a good time to have a third hand. 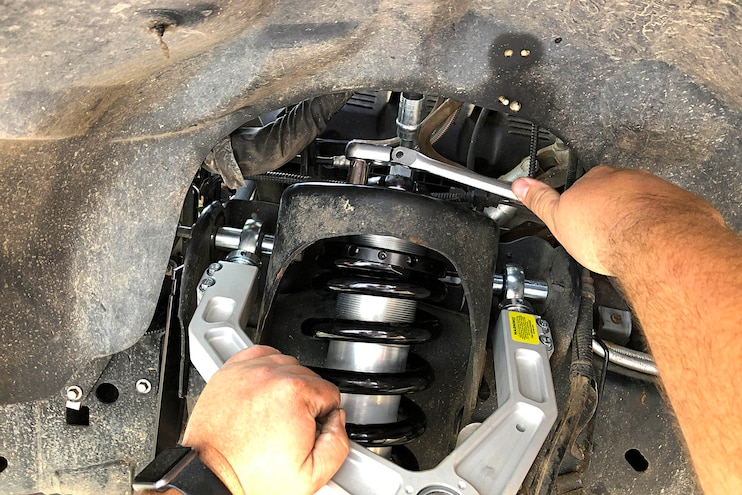 View Photo Gallery | 24 Photos
Photo 20/24   |   The factory upper shock retention ring (hat) is not reused. Instead, a trio of 3/8-inch Grade 8 bolts secure the ICON coilover to the bucket. The factory lower bolt is replaced with a 5/8-inch Grade 8 fastener, which is torqued to 120 ft-lb. 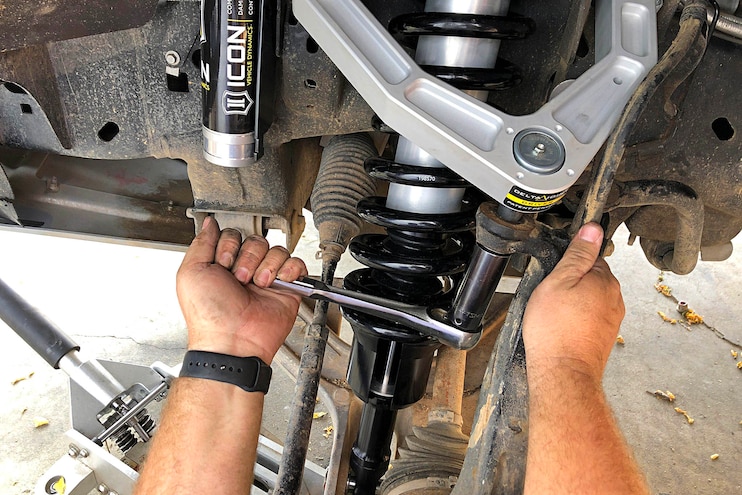 View Photo Gallery | 24 Photos
Photo 21/24   |   With the coilover in place, the upper control arm's Delta Joint can be torqued to spec (yes, the visible shank is normal) along with the factory steering tie rod and the sway bar end link. 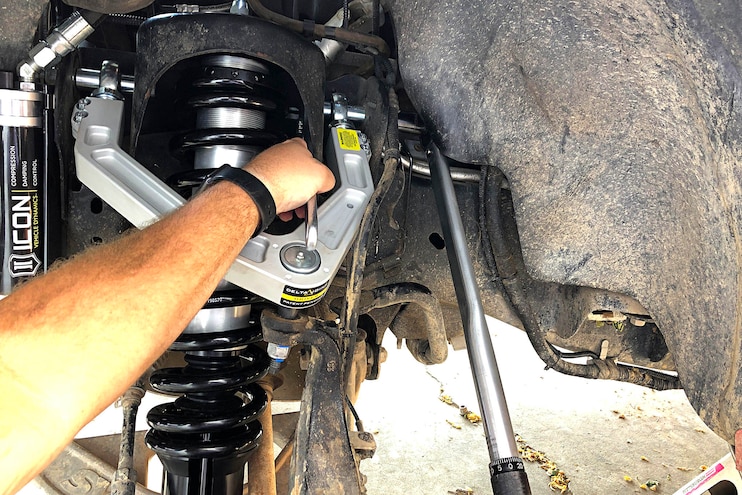 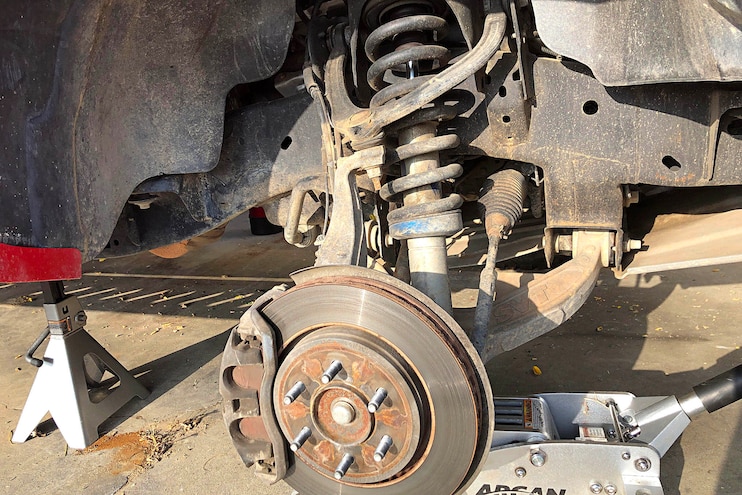 View Photo Gallery | 24 Photos
Photo 23/24   |   What a difference a day makes. After 90,000 miles of faithful service, our factory suspension (above) was looking pretty worn. The new ICON setup (below) not only performs at the head of the class but looks great doing it, too. 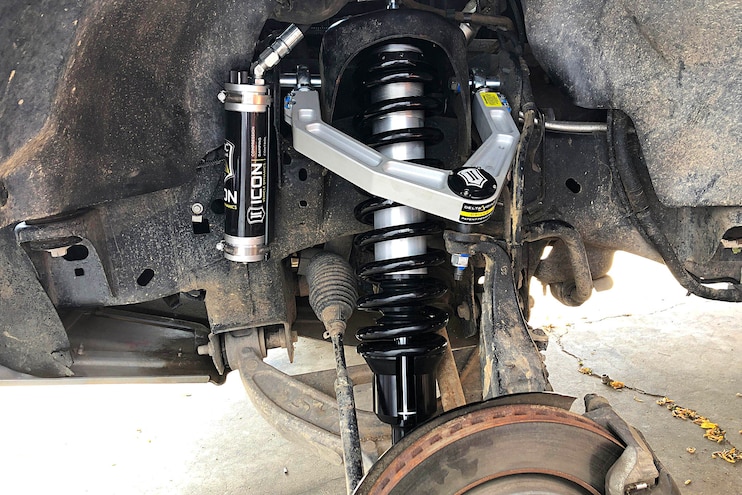 Truck Trend
Truck Trend
how to
Tech Install: 2002 Silverado 2500HD BDS Recoil Traction Bars
We’re all familiar with the concept of traction bars, or at least we sh...
Jason Gonderman – Oct 2, 2019
Truckin
Truckin
how to
Trail Ready Tundra: Part One
We don’t get to do a lot of Toyota tech around here. It’s not because we don’t want to. We lov...
Jeremy Cook – Oct 1, 2019
Diesel Power
Diesel Power
how to
Eliminating Sway: Improving a 2016 Chevrolet Colorado’s Handling with a Hellwig Rear Sway Bar Kit
The handling characteristics of a truck are an important part of its over...
John Lehenbauer – Sep 10, 2019
Truckin
Truckin
how to
Suburban Refurbin’
By now, you’ve probably seen the previous article that began our Lifted versus Lowered one-day mak...
Bryan Fross – Sep 3, 2019
Join Our FREE Truck Trend Network Newsletter