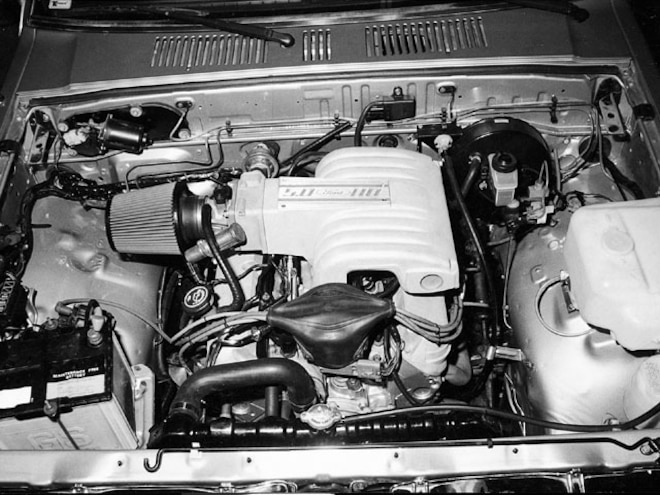 View Photo Gallery | 19 Photos
Photo 2/19   |   mustang V8 Engine Swap engine
What happens when your Mazda's engine has crapped out and you have access to a nice, fresh 5.0L Mustang motor? Sounds to us like it's time for a swap. So, how do you do it? You only have to look north to Canada's own Ultimate Customs for the answer.
The Ford 5.0L V-8 engine kit from Ultimate Customs follows the company's ever-popular V-8 Chevy swap kits for Mazdas. The Ultimate 5.0L kit is a lesson in simplicity, and the basic differences between Chevy and Ford motors help make this kit an easy swap. For one, the distributor is on the front of a Ford motor, which means you don't have to notch the firewall for clearance. Another factor is the number of recyclable donor parts from the Mustang. It's quite amazing how many of these parts that Ultimate found could actually work with the swap. Useable Mustang parts from an '88-or-newer car include the throttle cable, the transmission mount, the exhaust manifolds, the upper radiator hose, and the fuel pump. Some are even swapped around in positioning for a better fit. For example, the heater hoses and motor mounts work on this swap when moved from the right side to the left. With the glut of really cool 5.0L aftermarket parts floating around out there and Ultimate Customs doing the legwork, you end up the winner - in more ways than one.
The simplicity of it all makes for an install that most mini-truckers are capable of handling themselves. There is no welding or plasma-cutting equipment required. This swap is so easy, you'll spend more time wrestling the old truck motor out and dropping the new one in than you will converting the Mazda's engine bay. You can even make the few cuts needed with a battery-operated reciprocating saw. Could it be any simpler? Your formerly anemic Mazda will now be rumbling around town and you'll be calling out, "Here Chevy-Chevy, come here, boy."

- OF
By John Carollo
2 Articles