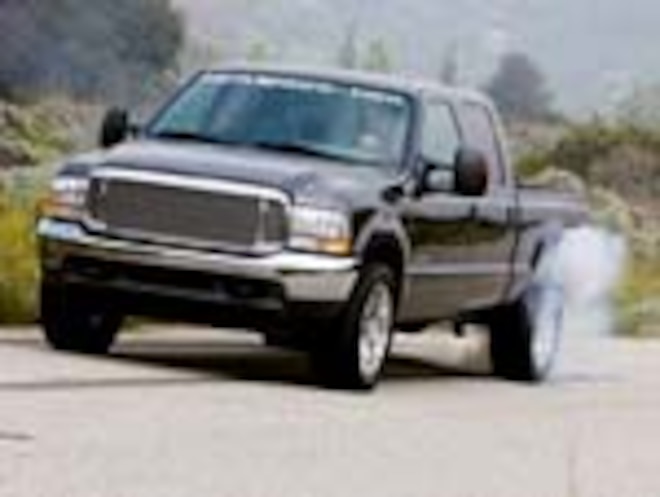 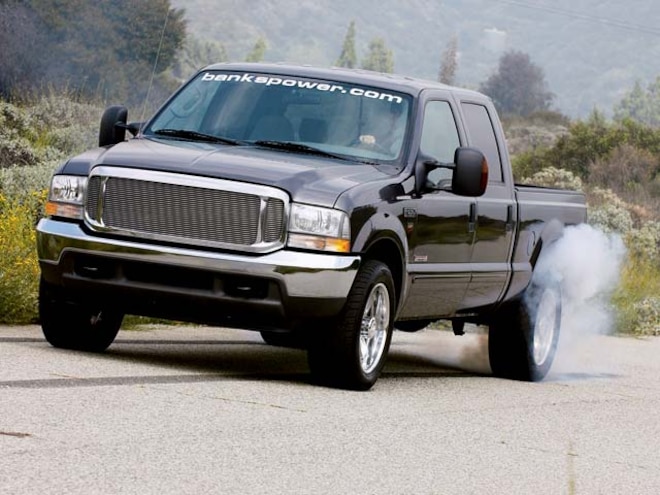 View Photo Gallery | 30 Photos
Photo 2/30   |   Ford F250 Front Drivers Side View
Think of your diesel truck as a sleeping giant. It's amazing how docile it may seem. But poke it with a stick, and you'll really rile that truck into action. That's been the approach of Gale Banks, who's pulled more power out of diesel engines than just about anyone -- from motorhomes to record-breaking Bonneville salt racers. Banks has a history of breaking things--particularly speed records. Throughout the years, he has earned trophies at the Bonneville Salt Flats for the world's fastest pickup, fastest piston-engine automobile, and fastest passenger car. And those are just a few of his record-setting achievements.
What about a more typical scenario? If you're looking for performance gains from your diesel pickup, take a look at the Banks Big Hoss Bundle. This upgrade can markedly raise the power on any of the three major U.S. brands of late-model diesel engines (GM, Dodge, and Ford), in some cases as much at 50 percent (or even more with the Speed Loader option). On the Ford 6.0L, specifically, it can pump up the output by as much as 138 hp and 231 lb-ft of torque, all with the simple twist of a dial on the dash. This knob manipulates three basic engine parameters: fuel pressure, timing, and injector pulse width.
Given these seven-league step-ups in performance, we figured you'd like to see just how easy it is to install the system. All that's required is replacing the intake tubes, intercooler, and exhaust system, and also making some changes to the engine computer, using the Banks Six-Gun Diesel Tuner module. The intake is basically a simple plumbing job, swapping out the factory pieces for Banks' higher-flowing tubing. A bit of trimming and modification is required on the battery trays, but, otherwise, it's a straightforward job that will take about day for someone with modest mechanical skills.
The Banks tubing for the intercooler is not only larger in diameter, but also smoother in shape, with no pinches or restrictions as seen on the stock components. The Banks intercooler looks similar to the factory unit and is a direct replacement, but it's a far more efficient unit. That's because it's much thicker, with more surface area for improved heat transfer.
The Banks Techni-Cooler, with its huge 3 1/2-inch boost tubes, works with Banks' High-Ram inlet casting to pack more power-producing cool, dense air into the engine. You get the maximum reduction in boost temperature with a minimum loss of boost pressure, which dramatically increases the flow of air to the engine's radiator, which is vital when pulling heavy loads up steep grades.
To protect the engine in this situation, the Banks system monitors a number of variables with an AutoRate powertrain management system. Among other features, it provides lock-up protection for the torque converter clutch, turbo calibration, precise fuel delivery at shift points, an exhaust gas temperature (EGT) limiter in the Speed Loader option, and coolant monitoring. If there's any indication that the engine is being overtaxed, Banks Six-Gun has a self-diagnosing ActiveSafety feature with an automatic bypass, which returns the engine to its standard settings.
To make the most of the Banks tuning module, the exhaust must be upgraded for a better flow. Also, a thermocouple is a necessary addition to carefully monitor EGT, since it will be higher as you dial up the output. Speaking of output, we tested the Ford F-250 after installing the Banks upgrades. When tooling around town, we were amazed how easy it was to burn rubber. Getting scratch in a big-honking diesel 4x4 was a new and thoroughly enjoyable experience for many of us.
That prompted us to bait a sports car on the freeway as well. We pulled up next to an Acura that had been tricked with all sorts of tuner paraphernalia, and then promptly stomped on the loud pedal, leaving the boy racer in our diesel exhaust. What's the cost of a Banks Big Hoss? Not much. Price of the pucker on that kid's face? Priceless.