Power, fuel economy, and no petroleum 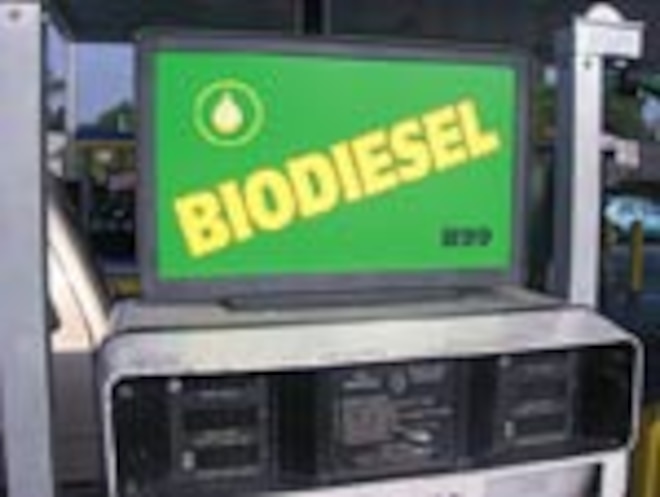 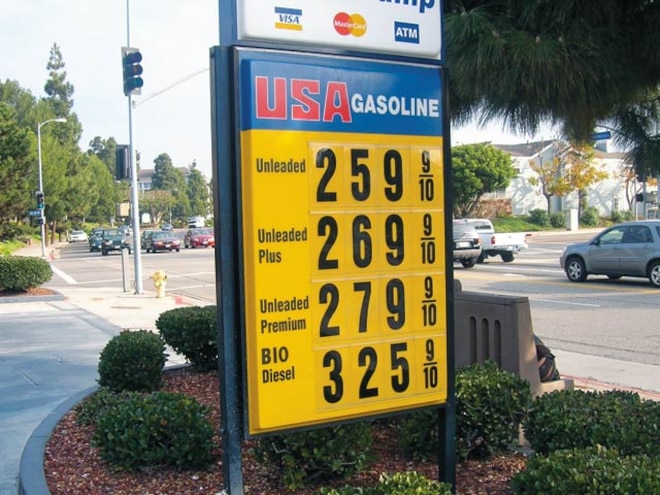 View Photo Gallery | 12 Photos
Photo 2/12   |   living With Biodiesel fuel Sign
With biodiesel in the news lately, we decided to take a day and fill up the company truck with biodiesel. There are a lot of theories floating around as to what biodiesel may or may not do to your engine, so we decided to go get some B100 (OK, B99) and head out on the road to see what happened. Would the truck stop? Would it make more power? Would it hurt anything? We were about to find out.
First, we stopped by the fueling station and filled 'er up, which was somewhat easier said than done. In the Los Angeles area, diesel is somewhat hard to find, which makes biodiesel even harder to find. One place where you can check to see who sells biodiesel is www.nearbio.com, which can help you find the nearest biodiesel fueling station. 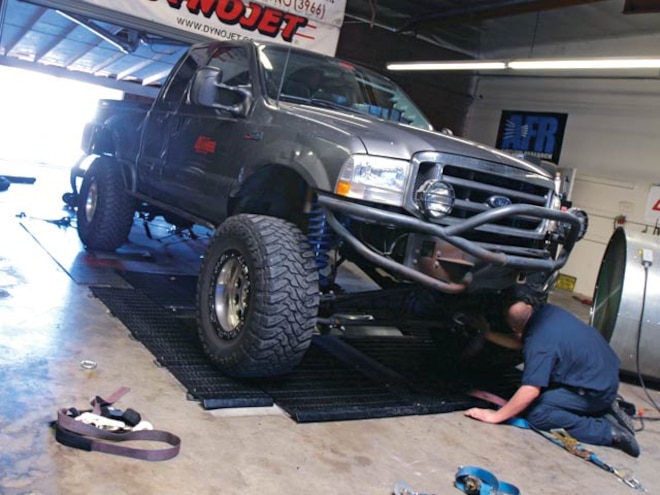 View Photo Gallery | 12 Photos
Photo 3/12   |   To see how biodiesel really affected the performance of our diesel, we headed to L.A. Performance Division to have the Super Duty strapped down to the chassis dyno and get back-to-back bio versus regular horsepower readings.
We found diesel prices ranging from $2.99-$3.79 (shop around!), and biodiesel seemed to be around 10 percent more than #2 Diesel, depending where we went. Over in Venice Beach, biodiesel seemed downright reasonable, coming in at $3.29 a gallon. Since we figured running biodiesel for just a day wasn't going to prove anything, we filled our test truck up with B99 whenever we could for a few weeks leading up to our story and then spent a day figuring out what we had learned.
For starters, we took an early morning trip over to a chassis dyno to measure the horsepower of the vehicle and see if we could verify Editor Kennedy's claim that the truck "liked it." Some people think that their truck is a little faster or quicker on bio, so we decided to make back-to-back runs on petroleum-based #2 Diesel and then on biodiesel to see if the dyno would register more, less, or equivalent power. Our test vehicle was the much-abused '02 Ford F-250 Super Duty that was 4-Wheel & Off-Road magazine's project truck awhile back. With the Super Duty being a diesel, borrowed (important if it broke), and having a switchable programmer that we could try different power levels, made it a great vehicle for our test. The Ford had "Stock," "Tow," and "Race" modes that we could toggle through to get different levels of fuel and make more or less power. Our first step was to run the truck on regular diesel and then switch to biodiesel to see if there was any discernable difference in power. After Kennedy drove around town in circles for a few hours and had the fuel light on, we were ready to make our dyno runs.

View Photo Gallery | 12 Photos
Photo 4/12   |   On a big truck like this, tires are a worry. The sidewall of the tire can contact a plate on the end of the rollers and smoke out the dyno room, not to mention leaving a groove down the side of your tire. We were lucky, ours smoked a little on the first pull, but that was all. The groove was gone after a day of driving.
Our first pulls on the dyno netted us 186 hp (Stock), 223 hp (Tow), and 244 hp (Race) while torque came in at 352 lb-ft (Stock), 410 lb-ft (Tow), and 454 lb-ft (Race). If these numbers seem low to those used to seeing big horsepower from programmers, remember this was a prototype programmer; somewhere along the line, the boost on the turbo was turned way down when the truck was lent to somebody else (OK, us). Even with our 30-plus-psi-capable turbo, we were only at 19 psi on the gauge, even in Race mode. With our numbers baselined, we dumped a 5-gallon can of B99 in to see what would happen next. Since biodiesel has a distinctive burnt popcorn smell, we had Kennedy stand over by the exhaust while we made a pull to make sure the engine was running in Bio mode. To be safe, we had the programmer in Race mode to make sure we had enough fuel to be smelled and also because it's really funny seeing someone trying to smell something while being engulfed by a cloud of black smoke!
When the smoke cleared and we were sure we were running biodiesel, we made three more runs in Stock, Tow, and Race, which netted us figures of 199 hp, 223 hp, and 244 hp. Torque seemed to improve slightly at 385 lb-ft, 420 lb-ft, and 459 lb-ft. After seeing the first run of 199 hp come up, we were actually expecting biodiesel to make a lot more power. After the other pulls (Tow and Race) were almost exactly the same as #2 Diesel, we looked at the original Stock run on #2 to see what was up. The big dip at the beginning of the dyno graph showed that our turbo was still spooling up on that pull, while all the other runs on #2 and biodiesel showed a smooth power curve. Comparing the Tow/Race pulls on #2 with those on biodiesel showed almost no difference in power, while biodiesel seemed to have a slight edge in torque.

View Photo Gallery | 12 Photos
Photo 8/12   |   We had our new filter, just in case. Our filter top had a provision where the only tool needed was a socket drive to loosen the top and gain access to the filter.
So biodiesel had proven that it could make just as much power as regular diesel on the dyno, but had it done anything to our engine? Since we actually had been running some biodiesel in our tank for a couple of weeks now, we decided to check to see if the fuel filter was showing any signs of particles or getting clogged up-another fear attached to running biodiesel. The rumor is that biodiesel cleans out your tank and any deposits may go straight into your filter and clog it up. Luckily, the fuel filter was easy to check on our Ford, so we took it out and found...nothing. To make sure it wasn't getting all gummed up, we pried the filter apart too, but the filter still showed no signs of deposits or particles. It's possible that we didn't run biodiesel long enough to clog the filter (or our fuel system doesn't have any deposits in it), so if you are worried about that, we would suggest carrying a spare filter or putting in an additional inline fuel filter. Also, if you are running in very cold weather (below freezing), use a mix of regular and bio just to be safe. As for us, bringing biodiesel into our lives seemed to have no ill effects. Our truck ran fine, made good power, and showed that biodiesel may be just as good or better than its petroleum-based counterpart.