How The Oems Are Making Oil Burn Cleaner Than Gasoline 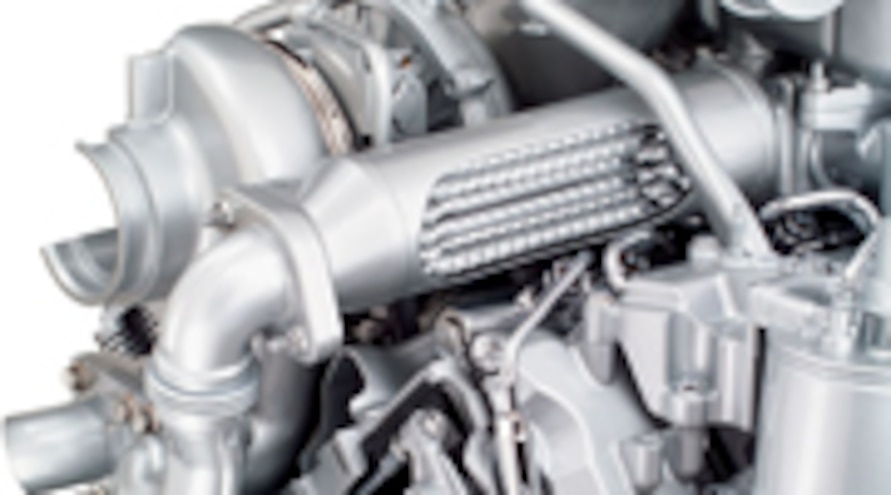 Your gasaholic friends may not believe you, but feel free to tell them that diesels will soon be cleaner than current gasoline engines. It's not a trick-they'll have to be that clean if manufacturers want to sell them in the USA. 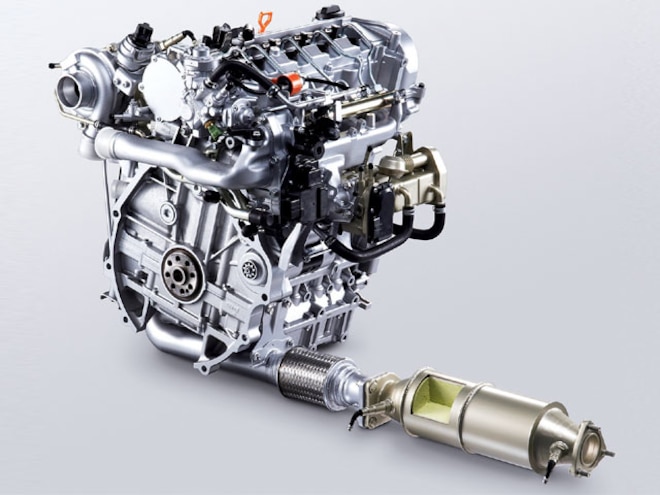 View Photo Gallery | 19 Photos
Photo 2/19   |   Honda's new four-cylinder i-CTDI engine is possibly the most advanced diesel engine ever built. The 2.2L engine produces 138 hp and a hefty 250 lb-ft of torque, and it does it cleanly and quietly.
EPA Crackdown
By requiring all passenger diesels to meet Tier II Bin 5 emissions standards, the feds threw down the gauntlet and started a war on nitrogen oxides (NOX), hydrocarbons, and particulate (soot) emissions. As of January 1, 2007, all light-duty diesels sold in the U.S. have to emit 50 percent fewer hydrocarbons and NOX and 90-plus percent less particulate matter (compared with the rules instituted in 2004). That's a giant drop in emissions and probably caused a giant drop in the stomachs of engineers who needed to act quickly to ensure their engines would be ready in time or risk being locked out of the U.S. market for a model year or longer. Luckily, the government made the transition easier by requiring cleaner fuel for diesels.
Ultra-Low Sulfur Diesel
By now, all the on-road diesel being sold in the U.S. has a sulfur content of 15 parts per million. This ultra-low sulfur diesel (ULSD) is much cleaner than its predecessor, which was allowed to have up to 500 ppm of the nasty element.
Exhaust Gas Recirculation
EGR: Those may be three of the most hated letters among automotive enthusiasts. Reintroduction of exhaust fumes into the intake manifold has been blamed for strangling musclecar engines and reducing diesel performance for the sake of better emissions. Hate it or not, EGR is here to stay because it reduces NOX, and it's only getting more invasive. The new 6.7L Cummins, LMM Duramax, and 6.4L Ford Power Stroke are sucking up to 25 percent of their exhaust back into the engine. That's a lot of hot air, so each of the engines employs a large EGR cooler to chill the gases and sometimes even a catalyst to clean them before they are routed back into the engine. Not only is there less exhaust to spin the turbo(s), but up to a quarter of the intake charge will be dirty exhaust instead of fresh air-and weight has been added to the engine package. Let's just say that opinions about EGR probably won't be improving. 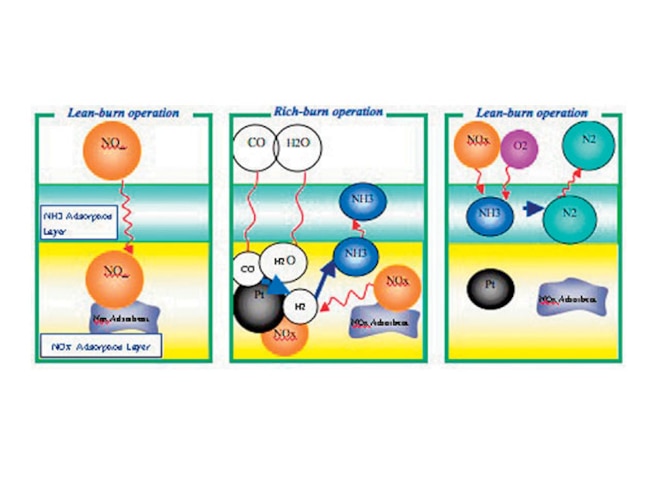 View Photo Gallery | 19 Photos
Photo 3/19   |   clean Diesel Tech diagram
1) Honda DPF system during lean-burn operation, the NOX adsorbent in the lower layer of the catalyst adsorbs NOX from the exhaust gas.
2) As needed, the engine-management system adjusts the engine air/fuel ratio to rich-burn, where the nitrogen oxides in the NOX adsorption layer react with hydrogen obtained from the exhaust gas to produce ammonia (NH3). The adsorbent material in the upper layer temporarily adsorbs the NH3.
3) When the engine returns to lean-burn operation, NH3 adsorbed in the upper layer reacts with NOX in the exhaust gas and reduces it to harmless nitrogen.
Closed-Crankcase NOx Reduction
Another way to reduce NOX emissions is to keep the engines sealed tight so motor-oil vapors in the crankcase can't escape. All three engines now eat their own crankcase gases to reap the NOX-reduction benefits.
Better Injectors
Finally, emissions-friendly changes that will actually help improve performance. Better combustion means more power and fewer emissions. That's why injectors that are capable of at least five injections per combustion cycle are becoming the standard. Not all of these will be power injections, though, because post injections will occasionally be used to heat up the exhaust and burn off gunk caught in the particulate filter. Unfortunately, this may reduce the mpg numbers achieved when compared with '06-and-earlier trucks.

View Photo Gallery | 19 Photos
Photo 7/19   |   clean Diesel Tech dodge Ram engine
Variable-Geometry Turbos
This newer development is controversial, but we're remaining optimistic about VGTs. While there have been complaints about the first variable-geometry turbos that came to market, they make sense on paper. By reducing the size of the area inside the exhaust half of the turbo (turbine housing) at low rpm, it's able to spin the compressor wheel faster than a fixed turbo at the same engine speed. We've driven the 6.7L Cummins with the Holset VGT and are happy to report it works like a dream at stock power levels. The turbo boost is always on tap, and you can hear the intake whistling at speeds that would normally be lag-inducing. We've also driven the new Power Stroke with two turbos (including one that's electronically variable) and can give it a thumbs up for low-rpm boost and smooth operation. The new GM turbo works similarly to the LLY and LBZ variable-vane turbo, and we've always been happy with its performance, so the future looks bright for stock compressors.
Passive Catalytic Converters
Diesel catalytic converters have been a bit of a joke up until now, and it's not their fault. It's just tough for a cat to be effective when it's constantly bombarded with sulfur, ash, soot, and moderate EGTs. Now they are being placed very close to the engine to keep them hot, where they will be stripping hydrocarbons and carbon monoxide from the exhaust before it's sent to the diesel particulate filter.
Diesel Particulate Filters
These ceramic honeycomb bricks are the main reason diesel engines will be able to meet the new emissions standards. Exhaust must pass through tiny holes that trap the particles that make up soot. These are stored until the engine senses enough backpressure to start a regeneration mode, where the EGT is raised to more than 1,000 degrees F. This burns off the trapped bits and causes the remnants to react with the catalytic material to further reduce emissions of NOx and hydrocarbons by converting them to pure nitrogen (N2) and carbon dioxide (CO2, the friendlier hydrocarbon). The DPF-equipped trucks we've driven act no differently under normal operation, except there is never any soot in the tailpipe. We noticed the Ford going into active regeneration, but it just meant the engine was forced to idle around 1,100 rpm, which raised the temperature of exhaust exiting the tailpipe. In our time with the Dodge, we didn't notice any regeneration periods, but the 6.7L we drove was rated at 305 hp, so it may not need as many regenerations. The Cummins has the only setup that doesn't require a vented tailpipe to reduce outlet temperatures.
Urea Injection
Audi, Mercedes-Benz, and Volkswagen are looking into technology where urea (an ammonia-based acid that is just what it sounds like) they call AdBlue is sprayed into the exhaust. By introducing more molecules with ammonia and carbon monoxide, the nitrogen oxides and carbon monoxide levels are reduced more than when just a DPF is used.
Honda's Killer App
"Killer app" is a term invented by techies to describe a feature, function, or application of a new technology that's indispensable or superior to the competition. Well, it looks like Honda has the killer app for clean diesel. The emissions system in Honda's new 2.2L i-CTDI makes its own ammonia. The catalytic converter uses two layers: one grabs nitrogen oxides from the exhaust and converts them to ammonia, and the other holds that ammonia until a lean burn phase where the ammonia will react with nitrogen oxides to create nitrogen and pure oxygen. No liquid reservoir is needed, and even better (worse for the competition), the system is designed to work in a low-EGT range of just under 400 degrees to less than 600 degrees.
Clean Diesel Power
The good news about all these advancements is that power output is still high. The EGR system and DPF may look like performance killers, but the Big Three trucks have similar or superior output compared with last year-and they are much, much cleaner. The same goes for the clean diesels coming from Germany and Japan. Power output is better than gas engines of the same size, and they are on the path to becoming the cleanest engines on the road.