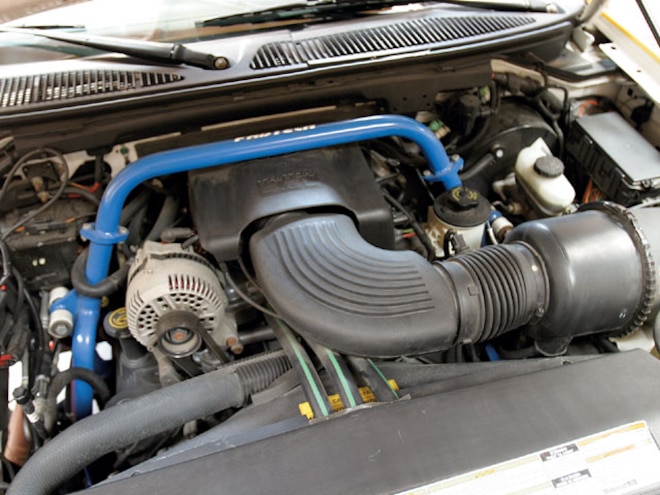 View Photo Gallery | 28 Photos
Photo 2/28   |   Our Allen Engine Development supercharged 4.6L mil was lacking in power. We were highly disappointed with the performance when we first installed the kit and things haven't improved with time. After dropping the truck off to get the supercharger checked out, it was determined that the blower was functioning correctly with 6.0 psi of boost, but the coolant circulation pump had failed.
Our '01 Ford Supercrew, which has been dubbed Project Sinatra, has been languishing in a sad state of disarray and ill running for some time, so we thought it was time to give some life back to our ride. For any of you who don't recall the truck, it was featured on our cover way back in July 2001. Back then, it was rolling on 20-inch wheels and had been 'bagged. Then a bit later, it was suddenly lifted with 33s and 16-inch wheels. Of course, the truck was supercharged and had an after-cat exhaust. For a while, it was a parts runner, a daily driver, and an overall employee wreck. We never did have the 4.6L V-8 running quite right-since the engine never had an intake, there weren't any headers on the truck, and the after-cat would make some crazy rattling noises. We wanted to represent it properly, so we sought the assistance of Ford superstars, BBK. They sent us boxes of parts, along with Brian Rogers to install them while we clicked off pictures of the build. Brian beat his knuckles to death and our Ford even managed to draw blood, but in the end we won the war and spun the engine hard on the dyno. After messing around with a couple of different exhaust setups, we couldn't quite figure out why our SuperCrew was still lolly-gagging with a blower shoving 6 psi of atmosphere into it. A trip to MagnaFlow answered all of our questions and more. Check it out.
From The Driver SeatFactory computers are not able to make changes too far from their preprogrammed parameters. Our Ford SuperCrew was paying for that inability to adjust enough to run properly. We'll be getting the truck on the dyno again-check out Volume 33, Issue 10, for that story-but with a Ford-trained Diablo tuner who can make the necessary changes with his trusty laptop computer. Until then, we'll just enjoy the fact the exhaust does not rattle anymore, and we still have 14 more peak ponies than we started. Under the hood, the open filter element and cold-air intake from BBK make our truck actually sound like there is a blower in there somewhere, which is exciting since the stock intake really kept the blower whine to an inconspicuous squeak. Along the bang-for-your-buck realm, we'll see how it all ties together with a computer tune.
YOUR QUESTIONS ANSWERED (The headers, Y-pipe, and exhaust require supporting the transmission and removing the crossmember for installation)
PARTS USED: (Not including tax or installation labor)