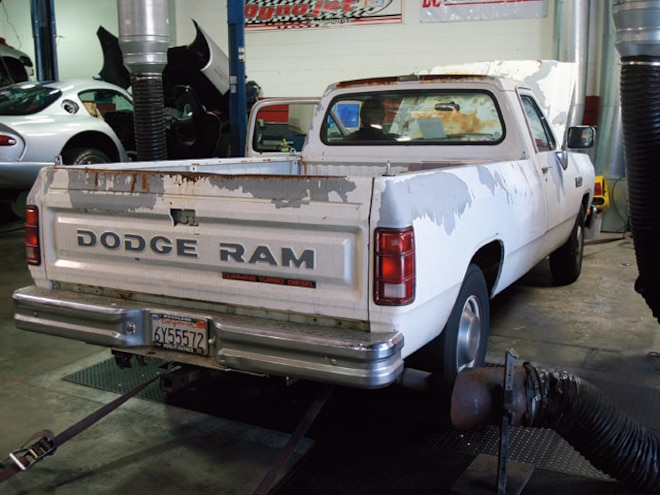 View Photo Gallery | 15 Photos
Photo 2/15   |   1989 Dodge Ram rear View
What happens when magazine guys get bored on weekends? More power, that's what. We were waiting around for gauges and some other stuff for our '89 Dodge Ram while we tried to think of a cheap way to solve our slipping transmission problem. Then we realized, "Hey, we haven't turned up the rotary pump in this thing yet!" and set to work with simple hand tools to discover how much power we could get out of free injection pump mods. First, we took off the pump top and rotated the diaphragm. This produced a power gain that was just barely noticeable on our test drive. We'd heard the big power boost was in the full fuel screw, so that was next. The screw had a collar on it from the factory to keep us from adjusting it more than about of a turn, so we cranked it all the way in. It definitely felt faster, but there was still no smoke so we knew we could go further. 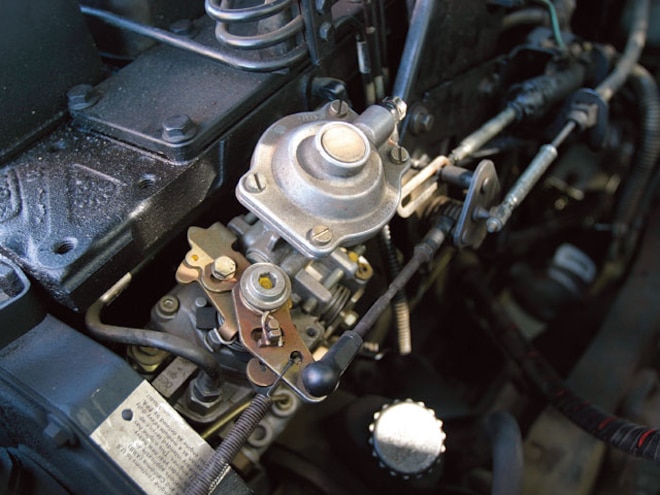 View Photo Gallery | 15 Photos
Photo 3/15   |   Although not as glamorous as its big brother, the P7100 injection pump (found on '94-98 Cummins), the VE pump found on '89-'93 Dodges can still be made to produce some good power.
We backed the screw all they way out of the pump and put it in a vise. We used a chisel, a hammer, and a pair of pliers to pry off the stock collar (which is tack-welded on) in order to turn up the fuel more. We were very careful not to damage the screw (too much) when doing this mod; it is a Bosch part--not something we can just run down to the hardware store and get. Once the collar was off, we could turn the screw clockwise for more power. But wait! There's more.
If we turned the screw too far, our engine could go into a "runaway" when it starts. The pump would keep fueling itself once the engine was started and would keep going even if we turned the key off.
Whenever we're messing with the fuel screw, we make sure to have the intake piping into the turbo off, and a 2x4 or something similar to cover the front of the turbo and stall out the engine in case of a runaway. Never, ever try to stall out the engine with a rag or your hand--make sure you have something sturdy that won't get sucked in the turbo. We recommend that you practice it a couple of times to make sure you have the hang of stalling it out quick, before you get to turning the screw.
Dyno-Tested
Now that we've given you all your warnings, you're probably ready to see how it performed. Our last baseline with injectors was 196 hp, so we figured we should now be well over 200 hp. On our first pull with the fuel screw turned in 1 turns, we made 234 hp. On our next pull at 2 turns we netted 250 hp. Finally, our last pull at 3 turns got us 264 hp and 500 lb-ft of torque, or an extra 70 horsepower and 98 lb-ft of torque over our number with the pump on its stock setting. We made one more pull with the screw turned in 4 turns (close to runaway), but it didn't make any more power, despite blowing more black smoke.
So were we happy with how our weekend turned out? You bet we were! We're in swinging distance of 300 hp at the rear wheels and so far have only spent $800 on injectors. Also, our transmission was slipping even worse with each pull we made, so we're expecting even better numbers once a tighter converter and new transmission are installed. We'll also be installing gauges so we can stop tuning blindly, and throw on an eBay-sourced nitrous system to burn up our extra fuel. Stay tuned: It's going to get fun.