We Install A Pyrometer And Boost Gauge On Our '89 Dodge 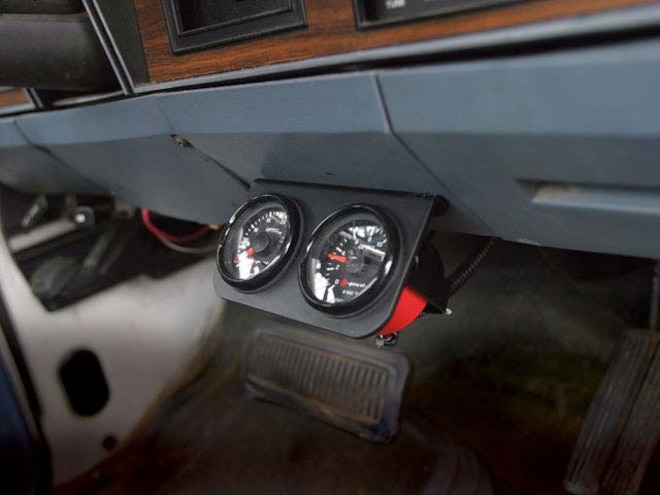 View Photo Gallery | 11 Photos
Photo 2/11   |   pyrometer Boost Gauge Install gauges
When it comes to diesel trucks, more information is always better. With project Rust Bucket, we were confident in doing quick dyno pulls, but still felt the need for gauges while driving on the street or down the dragstrip. Our truck is an '89, which means it is a non-intercooled 5.9L Cummins model, so we were worried about high exhaust gas temperatures. Also, we've been told our stock turbo can only live at up to 35 pounds of boost before its compressor wheel will make an early exit. As cheap as we wanted this project to be, we figured a set of gauges would be better than a trashed turbo or damaged engine. 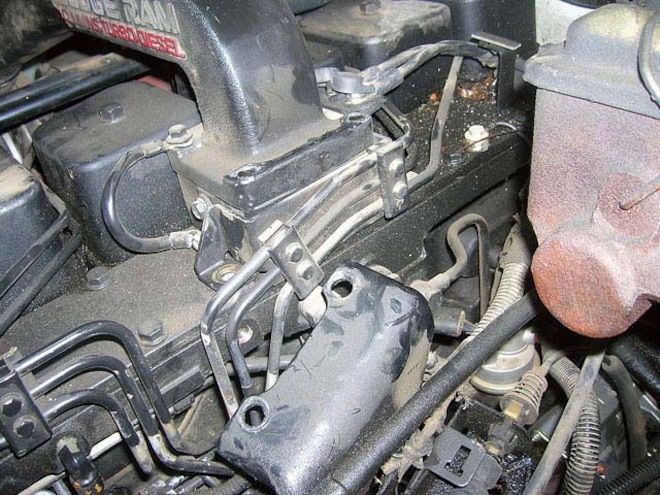 View Photo Gallery | 11 Photos
Photo 3/11   |   Once we had our new gauges, our first step was to tap into a manifold pressure source so that we could get a boost reading. Luckily, our Dodge had a source built in to the intake manifold (arrow).
For our gauges, we called up Big Power Diesel in Palmdale, California, which supplied us with a set of Di Pricol gauges. These gauges had everything we were looking for, in terms of accuracy and the "cool" factor, and were pretty reasonably priced to boot. Most importantly, we could now monitor our exhaust gas temperature and boost, so we'd know whether to start worrying.
Installation was pretty straightforward. Since we weren't planning on doing any towing with Rust Bucket, we ditched the aftermarket brake controller in favor of a spot to mount our gauges. We also considered mounting them in the dash, on top of the dash, or in the glovebox (for that "sleeper" effect), but in the end mounted them under the dash so they would be out of the way, yet still in a place where we could take quick glances at them. In addition to the gauges themselves, we also needed a mount and a few miscellaneous electrical supplies. After the gauges were installed, we tapped into the factory fuse box for power and drilled a hole in the exhaust manifold for our EGT probe.
Once the gauges were in place, we took the Dodge out for a test drive, and that's when things got interesting. We found out that our EGTs were as high as we had feared, and with our fuel screw turned in only 1 turns (the 234 rear wheel horsepower level), our exhaust gases registered a smoking-hot 1,600 degrees on our impromptu 0-60mph runs. Despite our 2wd Dodge having massive traction problems all the way into high gear, our times dropped from a stock time of around 11 seconds to the mid-7-second range. Boost was healthy, but not dangerous at 25-27 psi under full-throttle conditions. On the drive home, we figured, "What the heck. Our EGTs are already high," pulled off the freeway, and turned in our fuel screw another two turns (264 hp). When we got back on the road and started hammering it, we noticed that we were now up to about 28 psi of boost, and our EGTs wouldn't go above 1,400 degrees. Wait, more fuel means lower exhaust gas temperatures? That didn't seem right.
The point is that, without gauges, we wouldn't have known any of this valuable information. It turned out that non-intercooled trucks apparently hate high elevation, and while our initial 1,600-degree readings were from Palmdale, our later readings were in Los Angeles--a good 2,000 feet lower. We turned the pump back to its 234-horsepower setting for daily driving (at 3 turns it idles pretty fast) and could only get the pyrometer to climb to about 1,200 degrees once we were testing at sea level. As Rust Bucket progresses, we'll now be able to give more complete information on subsequent dyno pulls and dragstrip passes as we venture toward 300 rear wheel horsepower and beyond.
PROJECT RUST BUCKET PARTS LIST
Dynomite Diesel Stage IV Injectors: $749
Injection Pump Modifications: $FREE
Di Pricol Gauges: $250
Nitrous Kit: $300 (see pg. 170)
Grand Total: $1,299