View Photo Gallery | 23 Photos
Photo 2/23   |   59l Vs 67l Cummins Turbo Diesel 2006 Dodge Ram Quad Cab
A lot has changed since the 5.9L Cummins B-series engine was first offered in '89 Dodge pickups. The injection systems, cylinder heads, emissions equipment, and turbos have all seen dramatic improvements over the last 20 years. However, the one thing that Cummins has never altered was the displacement. During the same time period, General Motors upsized its diesel from 6.2L to 6.5L, and then to the current 6.6L engine for the Duramax. Ford sold 6.9L, 7.3L, and 6.0L in the past, and currently sells 6.4L Power Stroke engines, continually improving in order to meet various performance, fuel economy, and emissions requirements.
Yet while the number of valves and injection systems have been updates on the Cummins B-series, the engine has always displaced a consistent 5.9 liters. Of course, all of that changed last year when Cummins revised the B-series in the face of increased emissions controls for diesel engines. The new 6.7L B-series engine has 12% more displacement, advanced electronics, a variable geometry turbocharger, and is saddled with an EGR cooler and diesel particulate filter. 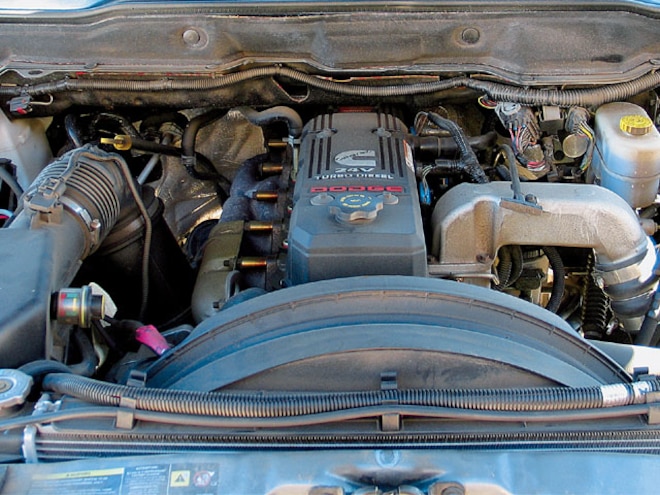 View Photo Gallery | 23 Photos
Photo 3/23   |   Even the last generation of the 5.9L B-series engine, with computer controls and common-rail injection, still offered plenty of room under the hood.
5.9L VS. 6.7L On The DynoWe wanted to see how the 6.7L stacks up next to the proven 5.9L, so we rounded up two stock Dodge trucks equipped with four-wheel drive and automatic transmissions. The 5.9L Cummins truck was an '06 Quad Cab shortbed, and the 6.7L Cummins was an '07 Mega Cab. We began by putting both trucks on Flash Auto's chassis dyno in Albuquerque, New Mexico, to see how the real world power figures compare to Dodge's advertised numbers. As we were generating power numbers, the differences in emissions controls became immediately obvious. The 5.9L made plenty of smoke under load, even in stock form. By contrast, the 6.7L was squeaky clean during our dyno pulls. Advantage: 6.7L Cummins
Stock Power NumbersThe 5.9L-powered truck put down 269 hp at 2,550 rpm and 594 lb-ft of torque at 2,300 rpm; and the 6.7L-equipped Dodge put down 259 hp at 2,850 rpm and 487 lb-ft at 2,750 rpm. Runs were made in direct drive for both trucks-however it should be noted that the 5.9L Cummins was backed by the 48RE four-speed automatic transmission and the 6.7L used the new 68RE six-speed automatic. Unfortunately, the 5.9L Dodge used in our test had 35-inch Toyo tires on 20-inch Eagle Alloy rims. In order to limit the variables between the two trucks, the stock tires and wheels from the 6.7L truck were swapped onto the 5.9L truck, resulting in 10 additional peak hp and 10 lb-ft of torque. Advantage: 5.9L Cummins 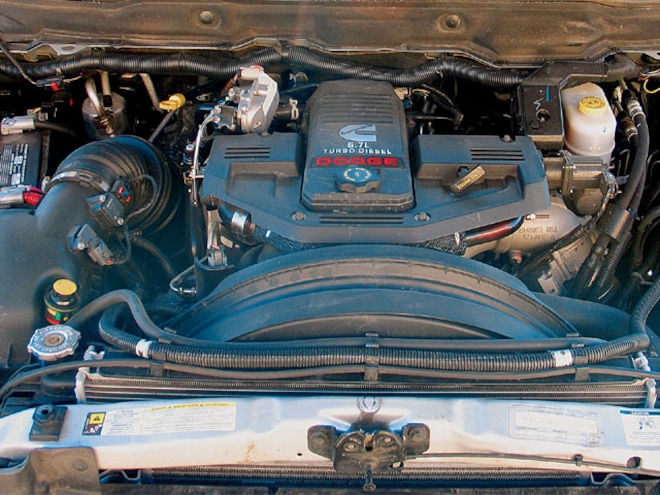 View Photo Gallery | 23 Photos
Photo 4/23   |   Displacement isn't the only thing that the 6.7L gained. Extra sensors and computer controls monitor every aspect of the engine now, thanks to revised emissions requirements.
Installing Performance Air IntakesAfter getting stock power figures, we installed some typical aftermarket components on both trucks to see how they responded to the modifications. We began at the front of the trucks by installing S&B intakes (5.9L P/N 75-5033 and 6.7L P/N 75-5015). Both S&B air intake kits used large-diameter, smooth, molded tubes and multi-layer cotton gauze filters that meet ISO 5011 specifications. The only real difference between the intake kits for the different engines was the installation of a mass air flow (MAF) sensor to the intake on the 6.7L Cummins in addition to the air intake temperature (IAT)sensor used on both engines. The S&B intakes were designed to route cool air from the stock air duct in the fender, and included detailed instructions complete with color photos. Minor trimming was necessary to get the feet of the new airbox to fit in the locating grommets on both trucks, but this was a small price to pay for an intake that costs a fraction of other competitors' products and delivers just as much horsepower and superior filtration.Advantage: Tie

View Photo Gallery | 23 Photos
Photo 5/23   |   All S&B intake kits come complete with detailed instructions, including color photos. Installation was a breeze, and you can even get custom engraving on the lid.
Plug-In Performance ModulesAfter installing the intakes, we added Edge's Juice with Attitude to both engines while the hoods were still up (5.9L P/N 30106 and 6.7L P/N 30107). The Juice module is a reliable and well-known product in the diesel market, and Edge was quick to bring the Juice to the market for the new 6.7L engine. The Juice module install on both trucks, placed between the ECU and the wiring harness with factory-style connectors, provides altered injector timing and duration for improved mileage and power. Both units were very similar, and installation was plug-and-play, the only difference being the location of the MAP sensor. While Edge didn't include the same detailed color instructions that S&B did, high-resolution photos and installation instructions were found in PDF format on Edge's Web site. Edge is currently expanding its installation video library for these products, and is planning to include an instructional CD with every purchase by the time you read this.Advantage: Tie

View Photo Gallery | 23 Photos
Photo 6/23   |   The new S&B filter not only offered greater surface area and airflow, it's also washable and reusable. No need to ever buy another intake or add to the county landfill-this filter will last as long as our diesel truck.
Edge Attitude MonitorThe Attitude in-cab monitor works in conjunction with the Juice performance modules to allow five different power settings that can be selected on the fly. The Attitude display monitors boost, exhaust gas temperatures (EGT), transmission temperature, and a variety of other user-selected functions. The Attitude also has the ability to reduce power when excessive EGT or transmission slippage is sensed, making it smarter than many competing products. On the 6.7L trucks, the Attitude can also display the critical diesel particulate filter (DPF) regeneration status. This is a feature we have yet to see offered from other manufacturers, but it provides a great sense of security when modifying a new emissions-equipped diesel truck. Advantage: 6.7L Cummins
EGT Probe InstallIn order to monitor the exhaust gas temperature (EGT), a pyrometer was added to the exhaust manifolds on both trucks. This was a relatively simple process for the 5.9L engine, but we could hardly even see the exhaust manifold on the 6.7L Cummins! We returned to Flash Auto and let its staff of experts perform the task. The money spent was well worth it when we drove away without any skinned knuckles. Advantage: 5.9L Cummins

View Photo Gallery | 23 Photos
Photo 7/23   |   The air intake tubes provided by S&B featured a smooth radius to allow maximum airflow into the turbo. This resulted in more induction noise than the stock system, but would only be a problem if you consider the sound of your turbo spooling up as "noise."
Exhaust System InstallWhile the S&B intakes and Edge modules were very similar for both trucks, the Silverline exhausts were dramatically different. Both exhaust systems are constructed from mandrel-bent T304 stainless steel and come with a limited lifetime warranty (5.9L P/N DS105 and 6.7L P/N DS109). Some other exhaust manufacturers can make these same claims, but it was the details that really set Silverline apart from the pack. Welded hangers, easy fitment, polished exhaust tips, bolt-on construction, and excellent packaging were included with both Silverline exhaust kits. While the construction was the same between the 5.9L and 6.7L systems, there were a few differences. The 5.9L system was 4 inches in diameter from the turbo back and used a polished 6-inch muffler with internal louvers. By contrast, the Silverline 6.7L exhaust started behind the DPF (by law all aftermarket exhaust systems must be this way) and used 5-inch diameter tubing with no muffler. We were nervous about running the daily-driven Mega Cab without a muffler, but the exhaust catalyst and DPF provided plenty of muffling-both trucks are scarcely louder than stock. While the noise did not change significantly, the fuel economy increased on each truck and the EGTs decreased. We were very surprised by the improvements offered by the DPF-back exhaust on the 6.7L.Advantage: Tie

View Photo Gallery | 23 Photos
Photo 8/23   |   The 6.7L Cummins engine comes equipped with a mass air flow (MAF) meter (arrow A), something not used on the 5.9L engine. However, both trucks do utilize air inlet temperature (IAT) sensors (arrow B).
Intake and ExhaustDyno NumbersWe went back to Flash Auto to quantify the changes on the chassis dyno, particularly to see if the horsepower gains on the 6.7L would be as great as the 5.9L since it did not benefit from a full exhaust upgrade. With the Edge Juice in the Stock setting, the 5.9L gained 38 hp and 117 lb-ft of torque, and the horsepower peak rose 300 rpm. The 6.7L was even more impressive, gaining 64 hp and 158 lb-ft of torque with just the intake and exhaust. Clearly there are restrictions on the 6.7L besides the DPF and exhaust catalyst, since they were retained.Advantage: 6.7L Cummins
Performance Module Dyno NumbersTurning the Edge Juice up to the Tow setting netted another 44 hp and 127 lb-ft for the 5.9L and knocked the horsepower peak down to a stump-pulling 2,200 rpm. The 6.7L gained 30 hp and 96 lb-ft of torque from the Juice's Tow setting. Turning the Juice up to the Extreme setting gained another 35 hp and 106 lb-ft of torque for the 5.9L, and 23 hp and 51 lb-ft of torque for the 6.7L.Advantage: 5.9L Cummins

View Photo Gallery | 23 Photos
Photo 9/23   |   In order to fit the S&B intake box into the stock grommets, it was necessary to shave the mounting feet with a razor blade. A lubricant such as dish soap or WD-40 would also help with fitment.
Fuel EconomyThe 5.9L truck was equipped with a 4-inch suspension lift and 35-inch tires on heavy 20-inch rims, and the owner was only getting 13 mpg in mixed highway and city driving. After the intake and Edge module were installed, mileage improved slightly to 14.5 mpg. When the Silverline exhaust was added, mileage improved to 16.5 mpg. "I had never been able to get 500 miles out of a tank of fuel before the exhaust was installed, but now I can," reported the 5.9L Cummins owner.
The owner of the 6.7L truck was not as scientific about recording his mileage, but he did experience a notable increase in mileage after the intake and module were installed. There also seemed to be another increase in fuel economy from the exhaust. The 6.7L owner was pleasantly surprised by the difference the exhaust made, considering that the factory diesel particulate filter and catalyst were both retained.Advantage: Tie

View Photo Gallery | 23 Photos
Photo 10/23   |   The S&B intake kit offered excellent fitment on both trucks, wrapping around the battery and feeding cool air from the inner fender.
ConclusionThe 6.7L Cummins didn't show the same power potential as the 5.9L, but that's no surprise considering that it's saddled with so many emissions controls. What is surprising was that even with an increased stroke length (4.88 inches versus 4.72 inches), the 6.7L made peak horsepower at a significantly higher rpm than the 5.9L Cummins. The fact that we were able to get so much out of the 6.7L without affecting the DPF or throwing any codes spoke volumes about the quality of parts that S&B, Edge, and Silverline are producing.
As more 6.7L Cummins-equipped trucks hit the roads, we expect even more products to become available for them in the future, closing the gap between the new 6.7L and the trusty 5.9L. While the displacement may have changed, the Cummins B-series engine is still alive and well.

- OF
By Harry Wagner
43 Articles