Half A Turbo For Half The Price 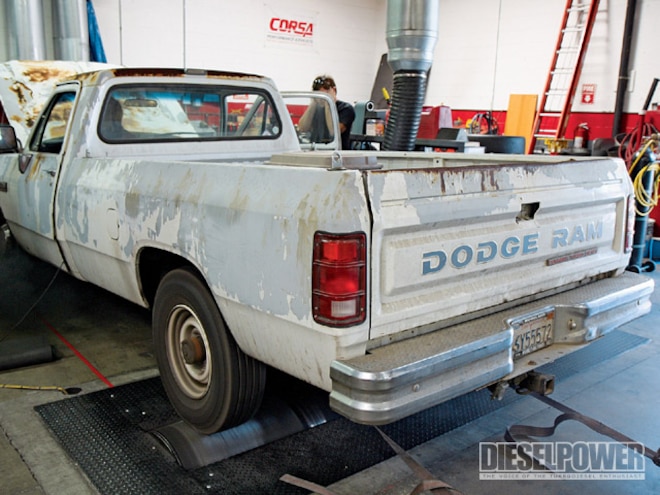 View Photo Gallery | 12 Photos
Photo 2/12   |   With our fuel turned up, nitrous armed, and compressor upgraded, we were ready to roll. After the chassis dyno stopped spinning, we were rewarded with 340 horsepower at the wheels, with nitrous. Torque jumped from 601 lb-ft to 691 lb-ft. Since we were hoping for more, we'll continue to fiddle with the truck on the dyno in the coming months in hopes of breaking the 400hp mark.
We were looking for a cheap way to make more power on Project Rust Bucket, so we started looking into compressor upgrades. A compressor upgrade is basically where the front half of the turbocharger is replaced, which means you'll get a new compressor wheel, as well as a new housing. We figured this should make more power, but there are also a bunch of other fringe benefits that we hadn't initially thought of. In no particular order, we'll delve into them now.
More Airflow
This might be the obvious one, but a turbo that moves more air can really be helpful for an engine that is overfueled, or has no intercooler like our '89 Dodge. Providing the fuel can keep up, more air also equals more boost and more power.
Efficiency
Our new compressor wheel measured 60mm instead of the stock 56mm version, so that is where the extra airflow comes from. But the larger wheel also has a more efficient design, which means quicker spooling, and more boost. Improved efficiency means the air moved by the turbocharger is often cooler, which will increase power and decrease exhaust gas temperatures. We saw proof of this efficiency in our upgrade, as the larger wheel gave us an extra 5 psi of boost at the same fuel setting, as well as a 100-degree drop in EGTs.

View Photo Gallery | 12 Photos
Photo 6/12   |   1989 Dodge Ram Compressor Upgrade old Turbo
More Durable
In Diesel Power, we often harp on how the factory parts are the most durable parts you can have. In this case it is different. Since the stock turbo is providing almost twice the boost it normally would, it becomes a spinning time bomb. With the fueling upgrades in our Dodge Ram, we could make about 37 psi, and these turbos are known to explode (compressor wheel comes apart) at roughly 35-40 psi, so we were living on borrowed time. The max efficiency rating of our new turbo is 40 psi, and we've heard of them spinning all the way to 55 psi without exploding. Anything more than 45 psi will just overheat the air, but we were worried about something else. We're running nitrous on our truck, and nitrous is extremely hard on turbochargers. It spins them up quickly, and makes them turn a lot faster. With a compressor upgrade, we were less worried about our turbocharger exploding and sending metal through our motor.
It's Cheap
Here's the best part: You get all these benefits for a price of about $400-$500. It's less than half of what a normal turbo upgrade would cost, and it's way better than the stock stuff. If your stock turbocharger is toast, you can always buy upgraded turbos (they're called hybrids) from places like High Tech Turbo for about $1,000. We seriously looked at its HX35/40 as an option, but instead decided to go with what we had, and to see how far a compressor upgrade could take us. For our '89 Dodge we used High Tech Turbo's Stage IV upgrade, which also included a new backing plate. High Tech makes upgrades for '94-'02 Dodges, as well as Ford and Chevy diesels, so don't think this stuff is just for first-gen Dodges.