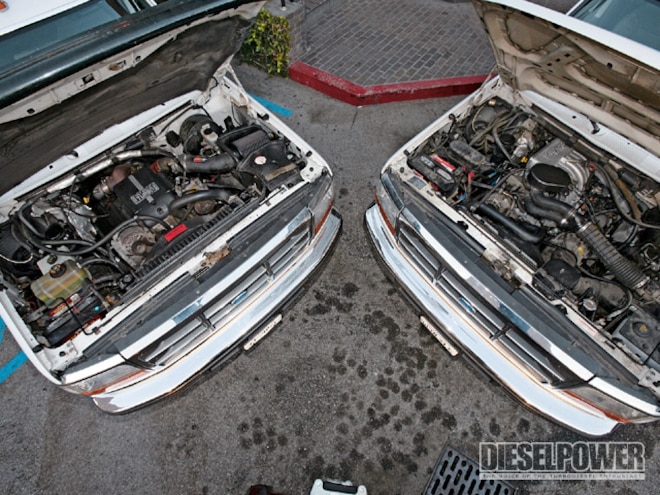 View Photo Gallery | 25 Photos
Photo 2/25   |   power Stroke Vs Small Block diesel Vs Gas
As diesel fanatics, we understand how simple it is to make big power numbers, so beating up on the gas-powered crowd never gets old. Especially when we know we can gain four or five times as much power for the same amount of money. This brings us to our latest low-buck build, which pits our '97 7.3L Power Stroke against a '96 5.8L gasser. We'll give you one guess as to which one made more power, both stock and afterward...
Baselines
While we realized our 7.3L already had a displacement edge over our 5.8L, factory horsepower ratings were close, at 225 for the Power Stroke and 210 for the gasser. With this in mind, we took both vehicles to DC Performance's dyno in Los Angeles for some baseline rear-wheel numbers. At the wheels, the gasser made just under 150 hp at 3,700 rpm and the Power Stroke laid down just under 160 hp at 3,000 rpm. Torque numbers were 246 lb-ft at 2,900 rpm for the 5.8L, and 281 lb-ft at 2,600 rpm for the 7.3L. This was a good start, as both horsepower and torque numbers were pretty close. And, when calculating drivetrain losses of 25-30 percent, both vehicles' factory power ratings at the flywheel seem pretty accurate.
Budget Power Stroke
Hunting down a clean, old-body style Ford is getting harder by the day. Some enthusiasts have already labeled them classics in the diesel community. Getting an F-350 similar to ours from a private party will probably cost you at least $7,500, while you should expect to pay around $10,000 at a dealership. While not cheap, you get what you pay for-a tough, proven truck, and the bulletproof 7.3L. So, maybe you're in college, high school, don't want a huge payment or insurance bill, or maybe you just don't want to let go of your old-body style workhorse because it's been so good to you. If any of these circumstances apply to you, then this is your story.
The Power Stroke Plan
While neck-snapping power never accompanied first-generation Power Strokes from the factory, the potential for good power has always been there. One company that has become a household name in modifying '94-'97 Power Strokes, and still generates a lot of buzz for the old Fords is Bean's Diesel Performance of Woodbury, Tennessee. We contacted Bean's for a set of its budget-friendly remanufactured Stage 1 injectors, 4-inch MBRP exhaust, TS Performance six-position chip, boost, pyrometer, and transmission gauges, and a three-pod pillar. In an attempt to keep our E4OD automatic alive, we also contacted TransGo for its E4OD-HD2 shift kit.
The Gasser Plan
To be fair, our budget buildup did cater to each engine's strong points. As the best way to make power with a diesel is to increase fuel supply, the best way to make gains with a gas engine is by increasing airflow. With this in mind, the plan for the 5.8L small-block Ford was an Edelbrock Performer intake, Performer cylinder heads, headers, a set of Crane Cams 1.7 ratio rocker arms, and ARP head studs.
Diesel build vs. Gas build
One of the best parts about modifying our Power Stroke was the fact that the only internal work required was installing the injectors. This benefit allowed us to stay relatively clean when working on our F-350. Obviously, the same couldn't be said for the gasser, as the intake manifold, cylinder heads, and factory rocker arms had to be removed. An experienced do-it-yourselfer could perform the diesel modifications relatively quick, and we proved just that when we took both vehicles to Diesel Tech in Hemet, California. Just as we suspected, our Power Stroke was easily finished in a day and a half, while it took nearly three days to complete the work on our gas-powered Ford.
Back To The Dyno
Upon our return to DC Performance's dyno, all bench racing and side-bets came to a halt, and the Power Stroke did all the talking. It was strapped to the dyno first, and put down 250 hp at 3,000 rpm and 453 lb-ft at 2,750 rpm. Since a diesel needs to be under load in order to make peak torque, we were convinced our torque numbers would increase by power-braking the truck. We were right. The second run yielded 483 lb-ft of torque at a lower 2,200 rpm. We should end the story there, but to be fair, the 5.8L put down a best of 166 hp at 3,750 rpm and 256 lb-ft at 3,200 rpm.
Diesel Performance: Still Easier, Still Cheaper
One of the things we were most impressed by after our Power Stroke build, was the newfound power on tap. The fuel increase combined with the chip improved throttle response tremendously. Overall, from stock to modified, it's a night-and-day difference, and the truck seems more eager to run. Whereas the Power Stroke struggled to keep up with traffic in stock form, it is now the complete opposite. Minimal throttle input gets the truck up to speed with ease, there is more than enough passing power, and with one on-the-fly turn of a knob, we can break the tires loose from a rolling 20mph start. Needless to say, we're happy with these results!
DOLLAR-PER HORSEPOWER
Diesel - $22.93/hp
Gas - $164.47/hp