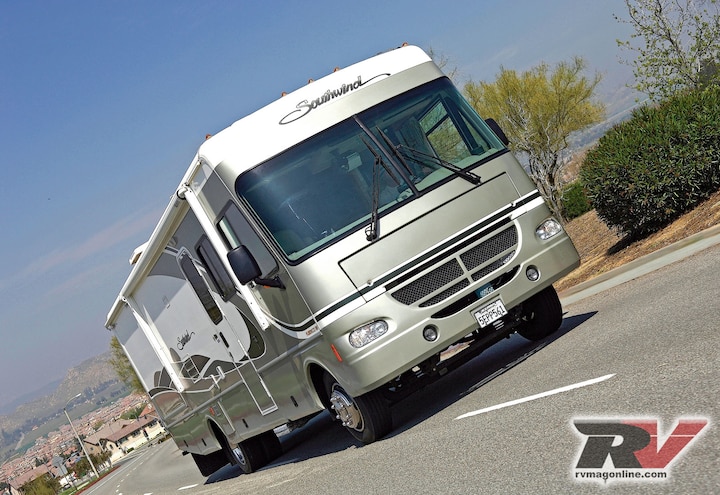 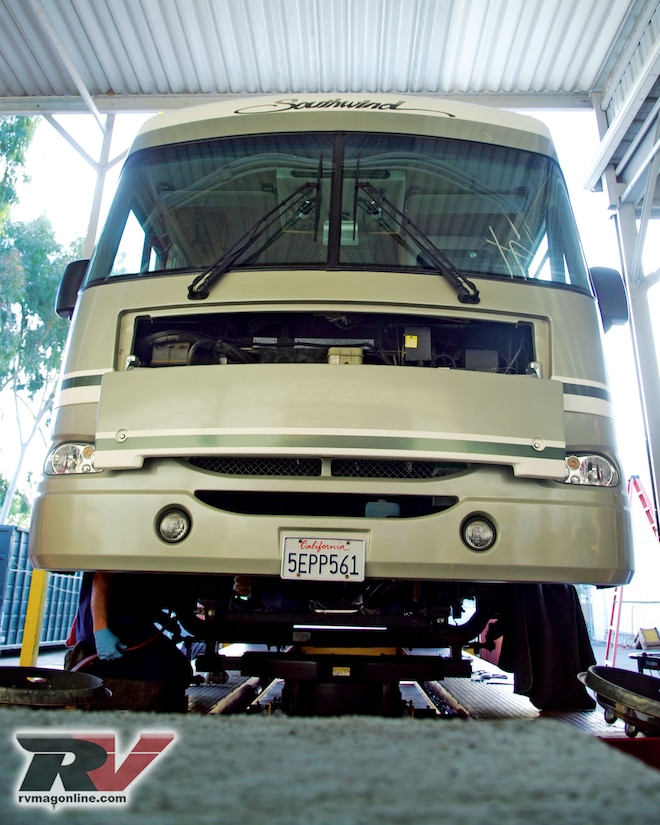 View Photo Gallery | 21 Photos
Photo 3/21   |   Today's RVs are cutting-edge pieces of equipment. Here Fleetwood's Southwind Series motorhome makes use of the cool air entering the grille opening to do more than cool the engine, transmission and power steering. The induction system is routed into the opening so the gas engine can breathe the cool ambient air for optimal power. The ducting also uses a velocity stack to increase the ducting's efficiency.
By 2001, GM's big-block was touting 496ci (8.1 liters). Known as a workhorse, this engine touted 340hp with 455 lb-ft of torque. While no longer offered in trucks, the 8.1-liter can still be found in many motorhomes on the road today, including our Fleetwood Southwind. As the largest gas engine available for the Class A chassis, the workhorse makes peak power at low engine rpm, offering a smooth and reliable powerband.
The fact is today's Class A coach needs every bit of the additional power from the new modular motor due to shear vehicle weight. It's not uncommon for one of these fully loaded rolling condos to weigh 12 tons. To put things into perspective, some Class A coaches weigh as much as four standard pickup trucks. That's a substantial gain in vehicle weight from the '70s Class A chassis. Incredible but not inconceivable considering the conveniences like automatic slide-out living spaces, a 30,000-Btu furnace, multiple TVs, full leather, hardwood cabinetry, multiple roof-mounted A/C units and so on. And that doesn't even scratch the surface of factory options available, like a mobile satellite unit, convection microwave/oven, computer workstation, Norcold four-door refrigerator with ice maker and a washer/dryer.
Coach manufacturers have jumped on the diesel craze, and the Class A chassis is about to see the first light-duty turbo diesel truck motor as a replacement for the big gasser. GM's 6.6-liter turbo diesel Duramax engine is definitely a thumper. The 403ci, force-induction oil burner puts out 365hp and 660 lb-ft of torque. It'll be interesting to get some feedback from owners comparing the two powerplants.
That doesn't mean you should horsewhip yourself or run out and buy a new coach just to get the diesel. We actually found an upgrade for gas-powered big-blocks that'll not only gets your workhorse into the turbo diesel power territory, it can boost your mpg at the same time.
We teamed up with Banks Engineering on this project Class A and learned that its PowerPack features a Ram-Air intake, a pair of stainless steel, tuned-length TorqueTubes headers, a crossover pipe, after-cat exhaust and, in some cases, an OttoMind Programmer. (Incidentally, the installation was approximately $400 at Banks.) Banks predicted the kit will achieve 70hp and 92 lb-ft more torque at the rear wheels with better fuel economy. While we weren't able to dyno-test the Class A by press time, our seat-of-the-pants evaluation after the installation vouched for the stellar performance gains.
In particular, we got improved throttle response in all types of driving, but better yet, even while towing a 3,600-pound boat trailer, its fuel mileage jumped from 6 to 9 mpg. The really cool part is you don't have to commit to running the more expensive high-octane fuels. The only negative was that the kit only fit the W-Series chassis. But with that said, we got a whole new level of drivability from our aging Southwind, and the vehicle didn't appear to work as hard on the mountain-grade roads. We think that most of the power was due to the unique intake and header system that Banks uses that offers greater airflow.
In the end, we had to ask ourselves, was it worth the $4,000 price tag? Well, by doing some math, you can find the answer. We paid $4.50 per gallon for pump gas. Before the installation, we got only 6 mpg. So we were paying
approximately 72 cents per mile. After the Banks PowerPack was installed, we gained an additional 3 mpg. This gave us a total of 9 mpg on average. That lowered our cost to drive the Southwind to 48 cents per mile. The difference was a savings of 24 cents per mile.
With that savings, we would need to drive 17,000 miles to pay off the $4,000 Banks upgrade, basically getting it for free. Was it worth it? The answer depends on how you see yourself using your RV. To us, with today's fuel prices, the answer is obvious.