Is It Still Worth It When Fuel Is Cheap? 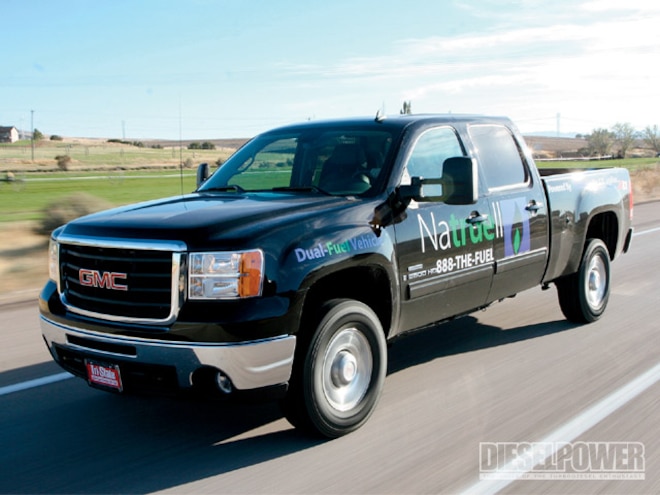 View Photo Gallery | 13 Photos
Photo 2/13   |   natruell Cng Conversion Kit gmc Sierra
Over the years we've seen diesel engines fueled with everything from cooking oil to ATF, and just about every other imaginable liquid or gas in between. But nothing has impressed us as much as injecting compressed natural gas (CNG) into a diesel engine. Why? It's simple really. Injecting CNG offers fuel mileage gains, offsets the fluctuating costs of diesel fuel, and CNG is more resistant to pre-ignition than propane or methanol.
Unlike many gasoline-engine conversions that are designed to run on 100-percent CNG, a typical CNG conversion for a diesel engine still uses a small percentage of diesel to initiate the combustion. Installing a CNG injection system on modern diesel engines might seem like a daunting task at first, but Natruell has recently developed a CNG kit for common-rail diesel engines with the help of Bully Dog. 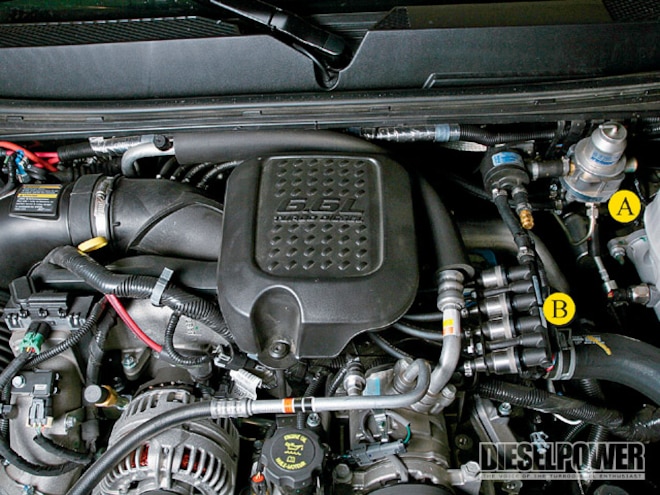 View Photo Gallery | 13 Photos
Photo 3/13   |   When installed on an '08 Duramax with the LMM engine, the Natruell CNG system uses a pressure regulator (A) and four injectors (B) to deliver the CNG to the engine as needed.
To inject CNG, Natruell's kit uses injectors and a regulator from Keihin, but the real science lies in the Bully Dog-developed electronic module that controls the injection of both CNG and diesel. The Bully Dog module hooks into the truck's computer system through the OBDII port. When CNG is injected, it backs off the injection of diesel to the engine so that diesel fuel is conserved. Natruell claims that running the engine on 80-percent CNG and 20-percent diesel offers the best mileage and performance.
So What Exactly is CNG?
Compressed natural gas is the same gas that is used to heat most homes in the United States, it's just compressed to a higher pressure. Where residential gas lines contain natural gas at 40 to 50 psi, CNG is compressed to 2,000 to 3,000 psi. Therefore, it packs much more energy and power into a smaller volume. Since the pressure is so high, the tank must be very strong to contain the gas. Most CNG tanks are built from carbon fiber-reinforced aluminum.
How Do You Store It?
The tank in the 6.4L Power Stroke we tested holds the diesel equivalent of six gallons of fuel, yet it filled the front section of the pickup's bed. One of our initial concerns over the use of CNG was the risk of transporting a tank filled with so much pressure, but after researching CNG storage devices, we found there are many tanks that are DOT-certified for automotive use. CNG is also relatively safe because if it is ever released, the gas is so light it rises quickly into the atmosphere, thereby reducing the risk of fire.
How Does It Work?
The CNG from the bed-mounted storage tank runs through lines to the engine bay where the gas enters a pressure regulator that reduces the CNG pressure. The CNG then runs to a series of Keihin injectors that are controlled by an electronic module. The Natruell kit uses one injector for each pair of cylinders on the engine, so the V-8 Power Stroke has four injectors. The injectors supply a set amount of CNG into the intake, after the air filter, and before the turbo for each engine stroke. Since the CNG injectors are electronically controlled, they're able to operate very quickly and keep up with rapidly changing engine speed and driver input.
Is it Worth It?
The economy of using CNG is arguably its biggest benefit to a diesel enthusiast. In some states, CNG can be purchased for as little as $0.86 a gallon. And although you still need to buy some diesel fuel, you use much less diesel with CNG injection. In our testing we were able to get as much as 40 mpg in a 6.4L Power Stroke-though we didn't calculate how much CNG we were using.
The Natruell kit is quite expensive at about $3,500 (installed). Natruell claims it will take roughly 40,000 miles to pay for the kit with the money you save on fuel. So over the life of a truck you could save $3,500 to $14,000 on fuel if you use the system and drive 200,000 miles. Along with fuel savings, there is said to be a performance benefit in using CNG. Natruell did some dyno testing on an '08 Duramax that showed an 80hp increase, taking the power output of its LMM Duramax-equipped test truck to a reported 405 hp at the rear wheels. Another benefit to CNG is that it supports the U.S. economy unlike other fossil fuels purchased overseas. Plus, states like Utah offer a government-issued CNG sticker that allows drivers to use the carpool lanes and get access to free public parking. There are even some areas that offer a tax credit for using CNG.
What If You Can't Find A CNG Station?
In the states of Utah, Nevada, California, and Oklahoma, CNG is available at select gas stations. For those of you living in areas where CNG is not readily available, there are still some options. Natruell offers a kit that allows owners to fill their vehicles at home using the natural gas line to their house. The kit comes with a pumping station that compresses the natural gas and fills the high-pressure tank in the vehicle. We tested the CNG-equipped Power Stroke in Utah and were able to easily find a filling station. The first time filling the tank was a learning experience, but the station staff was willing to help out and we filled the tank without any issues.
Our Experience
Overall, we were very impressed with the Natruell CNG system and were able to conduct some informal tests to back up the mileage gains. The performance of the '08 Super Duty demonstration vehicle was excellent, and we had no issues using CNG on a 200-mile test loop through the mountains. We did find a few drawbacks to the system however, like the loss of bed space from the tank, and the initial investment in the kit. And depending on your location, we've found it can be difficult to find CNG filling stations. Check out www.cngprices.com to see if CNG is available near you, and at what price. DP
THE BOTTOM LINE ON CNG INJECTION