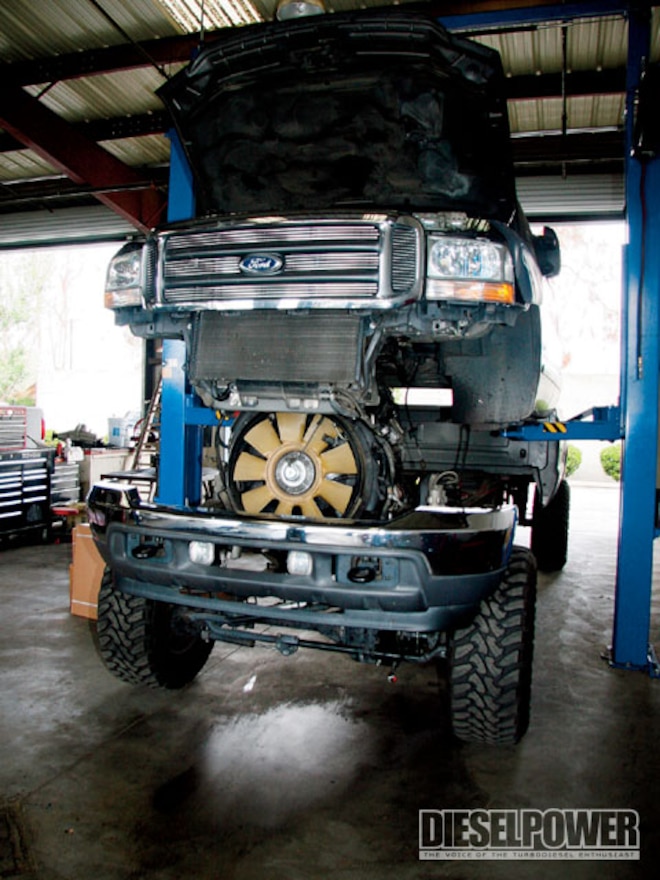 View Photo Gallery | 24 Photos
Photo 2/24   |   If you've been actively involved in the diesel scene the last 5-6 years, chances are you've seen the cab off a Super Duty, or have at least heard about it. Because of the tight engine compartment, it's much easier to unbolt the eight body mounts and disconnect all electronics from the truck and pull the cab when addressing the 6.0L's head bolt problem.
The 6.0L Ford Power Stroke engine suffers from one of the worst reputations in the diesel industry--a reputation that quite frankly we don't think it deserves, and one we're looking to improve. One of the most common questions we're asked about the 6.0L is: why didn't Ford just stick with the 7.3L Power Stroke? In hindsight Ford may wish it had, but there are many reasons why the 6.0L Power Stroke came to be.
Keep in mind that the federal government set tougher diesel emissions standards for engines built after January 1, 2003. That meant Ford and International knew they had to invest a substantial amount of money in their diesel engine--just to keep it smog-legal. It's possible they could've added an exhaust gas recirculation system (EGR), a variable-geometry turbo, and a higher-pressure injection system to the 7.3L and been emissions compliant. But a clean-burning 7.3L engine still would've been at a horsepower disadvantage to the 300hp Duramax and 305hp Cummins engines that both featured four valves per cylinder. The Duramax and Cummins engines also benefited from deep-skirt engine blocks and Bosch's latest common-rail injection, which made them quieter than the 7.3L.
So Ford and International built an all-new engine that could do four things: meet the 2003 emissions standards, make more power than the competition, improve fuel economy (thanks to its smaller size), and reduce engine noise. International utilized variable geometry turbo technology, digital fuel injection, four valves per cylinder, and exhaust gas recirculation (EGR) in order to get the job done. It should be stated outright that the 6.0L Power Stroke is nowhere near as bad as most people make it out to be. From a manufacturers' standpoint, the 6.0L met all emissions standards and survived all the testing performed during its research and development stages. So basically, the 6.0L shouldn't be problematic for the consumer--in stock form. 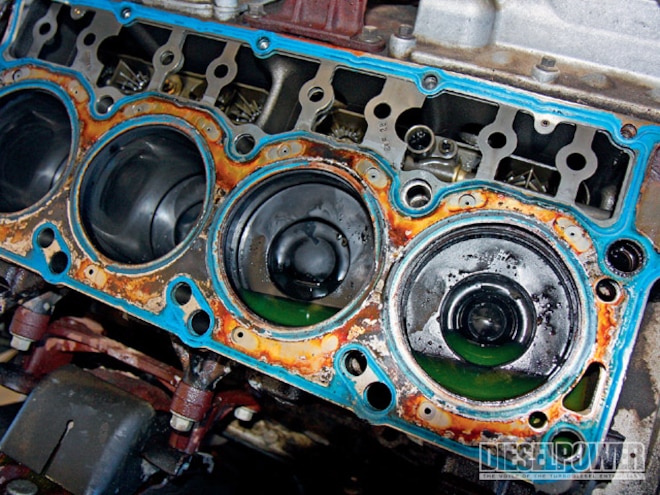 View Photo Gallery | 24 Photos
Photo 3/24   |   This is what happens when the torque-to-yield head bolts fail to spread the load and the head lifts off the block--coolant in the cylinders.
This brings us to the power adder aspect that we, diesel owners, usually dabble in at some point or another. Depending on the technician or mechanic you talk to, opinions on the 6.0L vary. When we spoke to the Power Stroke experts at Diesel Tech in San Jacinto, California, they told us most customers with '03 to '07 6.0L Super Dutys operating at stock power levels rarely experience major failures. This makes sense to us. After all, an engine operating within its factory-tested power range will obviously be more reliable, in theory, than one turning more rpm, fueling heavier, and creating more heat and higher cylinder pressures, right? Sure there were quirks, but what engine doesn't have its own particular set of issues?
With the help of Diesel Tech and Elite Diesel Engineering, we've gone beyond the well-known 6.0L EGR and head bolt problems and compiled a list of the '03 to '07 Power Stroke's major faults. We've even gone so far as to match each specific problem with the given model year(s) most affected by it and provided you with a reliable fix.
Glossary
EGR: Exhaust Gas Recirculation
IC: Intercooler
FICM: Fuel Injection Control Module
ICP: Injection Control Pressure
HPOP: High Pressure Oil Pump
VGT: Variable Geometry Turbo