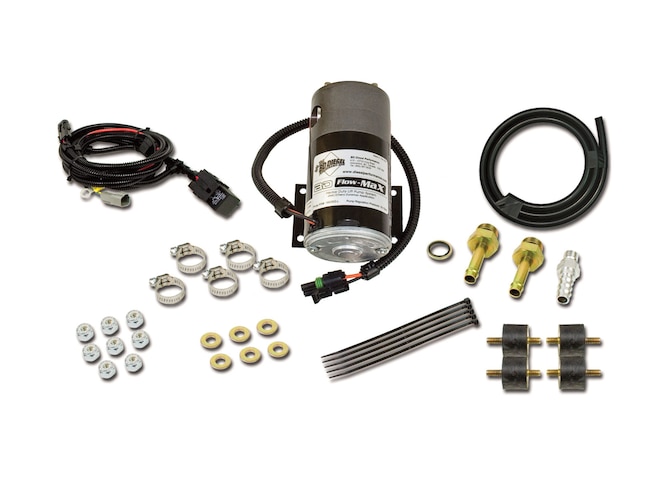 In our "Order of Modifications" article (see page 88), we set out to determine which parts we should add first to our '02 Dodge Ram 3500. We quickly learned that the biggest exhaust, most aggressive tune, and best intake wouldn't mean anything if we couldn't deliver fuel to the engine. The factory engine-mounted Carter lift pump was letting us down in a big way. It only made 5 psi of fuel pressure at idle and dropped to zero under load. Lift pumps are relatively inexpensive, but when they fail on a 24-valve Cummins, it often takes out the VP44 injection pump at the same time. These injection pumps cost more than $2,000, which is money we would rather spend upgrading our truck for improved performance. We set out to find a reliable and affordable solution to this common problem.
View Photo Gallery | 13 Photos
Photo 2/13   |   cummins Lift Pump Upgrade components
History Of The Lift Pump
The purpose of a lift pump is quite simple: to provide fuel to the injection pump. The fuel doesn't need to be under high pressure (that's the job of the injection pump), but it does need to support the volume demands of the injection pump, which relies on diesel fuel for lubrication. The '94 to '98 Cummins engines used in Dodge Rams feature a mechanical lift pump that runs off the camshaft, and these units have proven to be simple and reliable. When Cummins began adding electronics to its 5.9L engines, though, changes were deemed necessary. A Carter lift pump was added to the 24-valve trucks under the hood, next to the injection pump. Unfortunately, diaphragm pumps are designed to push fuel, not pull it from the tank, and it is not uncommon for the Carter pumps to fail-even in stock applications.
When the common-rail engine was introduced for 2003, the lift pump was moved to the fuel tank-a common configuration amongst gasoline-powered vehicles. While this was a better system than what the 24-valve trucks used, the pump and filter are difficult to access in the tank, if the need should arise. Although less than ideal, owners of common-rail Cummins trucks cannot complain too much, since Duramax trucks are equipped with the same CP3 injection pump and come from the factory without any auxillary lift pump whatsoever.
View Photo Gallery | 13 Photos
Photo 3/13   |   Our BD Diesel X-Monitor let us know that something was amiss with our '02 Dodge Ram's fuel system. It doesn't take long to waste a VP44 injection pump when it doesn't have fuel to lubricate it.
Options and Alternatives
Aftermarket options for lift pumps run the gamut in terms of price and performance. The lowest cost option is to use an electric fuel pump designed for a gasoline engine on the framerail near the fuel tank. Though it saves money, this solution requires the end user to source all of the necessary fittings and is devoid of any relevant instructions. But it's not a bad choice if you don't mind getting your hands dirty and are capable of engineering your own system. At the other end of the spectrum are the high-end systems, which typically include filters and the ability to remove air from the fuel. These systems are more costly and can be quite noisy, although they do offer superb performance and reliability.
BD Diesel introduced its Flow-Max lift pump in 2008 as an alternative to traditional lift pumps. This pump promises better performance and easier installation than a fuel pump intended for a gasoline engine yet is less expensive and not as noisy as the systems that remove air from the fuel. How much less noisy? BD claims its Flow-Max is 16 dB quieter than the competition. Instead of using a diaphragm-style pump (like the factory Carter pump), the Flow-Max is a gerotor-style pump that doesn't have the same inherent problems with pulling fuel from the tank. This allows the Flow-Max to move 200 gallons of diesel per hour-even when mounted on the framerail where it is easy to access. While the mounting location (directly under the driver) had us slightly concerned about noise, the Flow-Max was so quiet that it went unnoticed, even with the pump running and the engine off.
View Photo Gallery | 13 Photos
Photo 4/13   |   This is the stock Carter lift pump that was used on '98 to '02 Rams. Its diaphragm construction does a decent job of pushing fuel when mounted next to the tank, but Dodge didn't do us any favors by mounting this pump under the hood.
The Install
To install the BD Flow-Max we went back to Imler Diesel Performance in Sacramento, California. While the Flow-Max can be installed at home, thanks to the thorough instructions, the process was much easier with the vehicle on a lift and a few specialized tools (such as a low-profile pipe cutter). Plus, the technicians at Imler have installed hundreds of aftermarket lift pumps and know all the little tricks for a clean, reliable installation.
Imler Diesel's Steve Scott got our Flow-Max installed in just a couple of hours. After the work was complete, we put the truck back on Imler's Mustang dyno to see if we had gained any power. As we mentioned above, fuel pressure had previously been dropping to zero under load on the dyno, which starved the engine for fuel. The BD Flow-Max made an extra 8 hp and 30 lb-ft of torque, but even more important to us was that the fuel pressure remained steady at 18 psi all the way up to 3,000 rpm. With a solid fuel system we can now focus on improved power and mileage instead of worrying about spending our hard-earned cash replacing the injection pump.