There Are Two Things That Could Be Killing Your 5.9L Right Now - Here's How To Fix Both 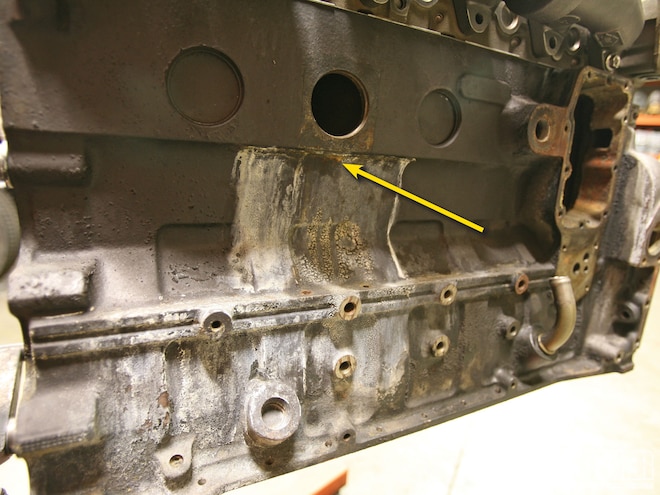 Cummins engines are thought to be completely indestructible. In practice, however, there are two fatal flaws that not only damage these engines but can ruin them beyond repair.
View Photo Gallery | 10 Photos
Photo 2/10   |   Cracked 5.9L Cummins engine block!
Fatal Flaw 1: The Killer Dowel Pin
The first such weakness affects 5.9L Cummins engines manufactured between 1988 and 1998 (in other words, 12-valve Cummins engines used in Dodge Rams). These engines feature a steel dowel pin that locates the front timing gearcase. Over time, this steel dowel pin can wobble out due to the constant heat cycles and vibrations of the engine. If (or when) the dowel pin works its way completely out, it falls into the timing gearcase.
When the dowel pin falls, a few things can happen. If you're lucky, the pin will miss everything and just fall straight into the oil pan. If you're not so lucky, it will hit one of the timing gears and shoot out the side of the timing case, creating a BP-sized oil spill in your driveway. In the third and most unfortunate scenario, the steel pin will jam between the timing gears. This typically causes the cam to break, the valves to hit the pistons, and the engine to internally self-destruct. While this last scenario is rare (a hole in the timing gearcase and a big puddle of oil is most likely), it has happened to many unfortunate enthusiasts, which is how it got its name-the killer dowel pin (KDP).
Fatal Flaw 2: The Weak 53 Block
The second potentially deadly flaw occurs in '99 to '02 5.9L Cummins 24-valve engines. It's known as the 53 block problem, because these engine blocks have the number 53 cast into the side of the crankcase. After years of use, the 53 blocks tend to crack until coolant starts to pour out the side of the block. This is an issue that many people kid themselves about. While it's something you can live with for a while, eventually the leak will get so severe that you'll be refilling your cooling system on your commute to work. Sooner or later, the truck will need a new engine if it's not repaired.
View Photo Gallery | 10 Photos
Photo 3/10   |   Broken '89 to '98 front timing gearcase!
Tackling the Killer Dowel Pin
For a KDP repair, most of the front of the engine needs to be disassembled to gain access to the timing gearcase. The fan, shroud, overflow bottles, balancer, and lower pulley all need to be removed. With the front of the engine stripped, you can install a small metal tab over the dowel pin to keep it from rattling out. While you're in there, make sure to tighten up all the gearcase bolts. These bolts loosen over time and will do just as much damage (or more) if they fall into the front geartrain. Many diesel companies (such as TST Products and Source Automotive) sell killer dowel pin kits for about $60 and include a tab, timing cover gasket, and front crank seal to put the engine back together. After performing this repair (or getting a shop to do it for you) you'll feel much better knowing you're not driving a ticking time bomb down the highway.
The 53 Block-An Impossible Fix?
While other Cummins blocks have been known to crack, the 53 blocks are by far the most common. To identify a 53 block, look for the casting numbers on the front driver side of the engine.
View Photo Gallery | 10 Photos
Photo 4/10   |   Although this engine is on a stand for better viewing, you can clearly see the 53 on the front driver side of the block. If you see this number while you're inspecting a '99 to '02 model Dodge, think long and hard before you buy it.
We might as well break it to you right off the bat. The best way to fix a cracked 53 block is to replace it. That repair can cost $5,000 to $10,000 if you have a shop perform the work.
A lot of people try to fix a cracked 53 block by other means-with varying degrees of success. Temporary fixes include block stitching, stitch welding, and J-B Weld. These temporary fixes can hold you over until you can find a replacement engine from a junked truck, or let you save your pennies and dimes until you can buy a new engine.
The real problem with these temporary fixes is the wall thickness in that area of the block. That's why drilling out the ends of the crack, V-notching the wound, and welding don't permanently fix the problem. The block will just simply re-crack.
Brad Ponci at Ponci's Diesel Center said he charges $500 to weld the block. His repair gets the truck back on the road and gives the owner time to decide what he or she wants to do with the engine. Ponci said the average lifespan for a welded block is usually a year or two before cracks start to form again, but there's no guarantee.
If you happen to be a professional welder (or know a friend who is), then there is a very labor-intensive process that involves welding the block. Some say this repair will last the life of the engine. It involves using an extreme amount of filler rod to basically rebuild and reinforce the weak area of the block. This welding procedure can be found at: www.muggyweld.com/53block.html.
Buying A Flawed Vehicle
So the real question is: Should these problems keep you from owning or buying an '89 to '02 Dodge? Our answer is no, they shouldn't. In the case of the '89 to '98 trucks, just get the KDP fixed as soon as possible. On the '99 to '02 Dodges, our advice would be to stay away from the 53-block trucks, because not all '99 to '02 Dodges used the 53 blocks. If you do find a 53-block Cummins-powered truck, we'd negotiate heavily on price. We'd offer $2,000 to $3,000 less than what you think the truck is worth.