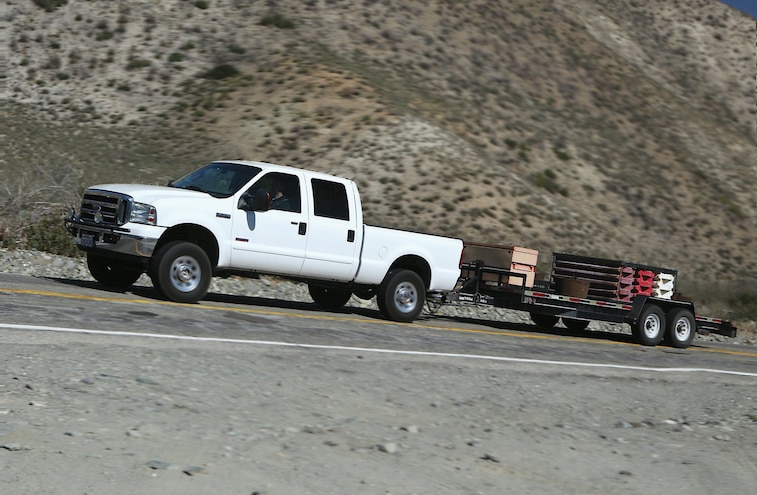 If you can live without driving your truck for a couple of days, the folks at Banks Power can help you achieve some impressive gains in horsepower and torque. By using water- methanol in conjunction with more conventional upgrades, they were able to coax an extra 171 hp and 366 lb-ft of torque from an 2007 Ford F-250 6.0L Power Stroke. The installation is designed to take no longer than a weekend and can be done at home, by your favorite diesel shop, or even by the Banks team in Azusa, California. Here’s how they did it in their garage, along with results from chassis dyno runs and data gathered from towing on a highway with an 8-percent grade.
Breathing Easy
The first stage of the upgrade is focused on making big improvements to the intake system by replacing the factory intercooler, intake manifold, boost tubes, and the air filtration system. The Big Hoss Bundle installation starts with the removal of the restrictive factory airbox. After it and the battery are removed, a spacer is installed under the battery box that makes room for the 3½-inch constant diameter boost tubes. These mandrel-bent tubes connect the turbocharger to the Techni-Cooler intercooler that has 21 percent more volume than the stock unit, for a cooler and more consistent intake charge temperature. The High-Ram intake manifold replaces the narrow factory elbow, and there are silicone boots with high-torque T-bolt clamps for each connection. The inlet of the Banks Ram-Air extends to just behind the truck’s grille for unrestricted access to cool air, and it uses a high-flow, washable cotton filter inside a sealed airbox. 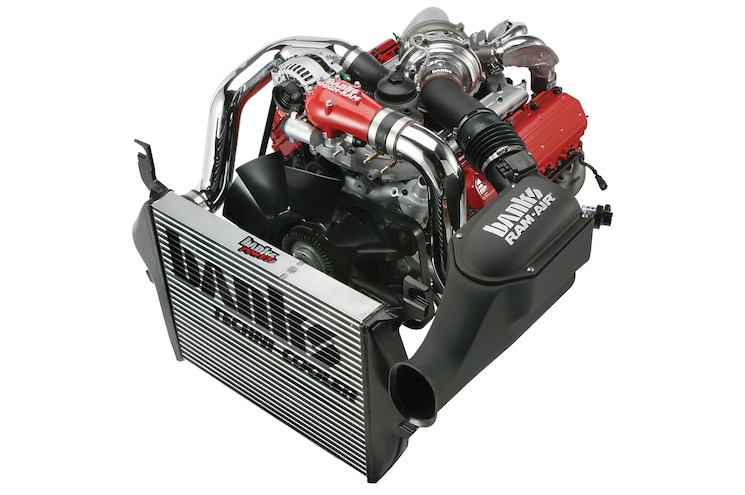 View Photo Gallery | 22 Photos
Photo 2/22   |   The 6.0L Power Stroke engine can be improved to put out 402 hp and 793 lb-ft of torque at the rear wheels when the Banks Big Hoss Bundle is combined with the company’s new Double-Shot water-methanol injection system. Even with all the upgrades, installation is designed to take just two full days, and the system is 50-state emissions legal.
Getting Misty
Next, the Double-Shot two-stage water-methanol injection system was installed with two ports that feed directly into the High-Ram intake manifold. The water-methanol injection system was designed to begin spraying when the boost pressure reaches 16 psi, then to have a second stage start to kick in at 20 psi. The system controller alters the output of the solenoids managing each injector to provide an even ramp-up of delivery, with the maximum volume flow occurring at 30 psi.
Computer Tricks
To make full use of all the upgrades on the intake side of the engine, a Six-Gun programmer was installed, along with an iQ 2.0 controller and information center. The tuner works by altering the timing, pulse width, and fuel pressure to make the most of the enhanced airflow, along with safety features that kick in to protect the engine and transmission. The iQ 2.0 is a 5-inch touchscreen display that lets you monitor parameters such as boost, engine load, airflow, and more. Along with allowing you to set alerts for things such as EGT, coolant temperature, and transmission temperature, the iQ 2.0 is enabled with GPS for navigation, features Bluetooth for hands-free phone calls and streaming of music, and has 4GB of internal memory that can be expanded with the use of an SD memory card.
The Big Exit
The increased engine performance was complemented by a 4-inch Monster exhaust system with the optional Diesel Duals dual outlet exhaust system that utilizes 6x5-inch tips. The cat-back system uses constant diameter bends and a straight through muffler design that’s tested to flow 76 percent better than the stock parts and sound aggressive without beating up your ears. Since this project truck is used for towing a boat, a SpeedBrake exhaust brake controller was also installed. The SpeedBrake is a fully electronic system that’s operated by the iQ 2.0 and controls the turbo’s exhaust vanes, torque converter, and transmission gear selections in concert to slow the truck down without use of the service brakes. 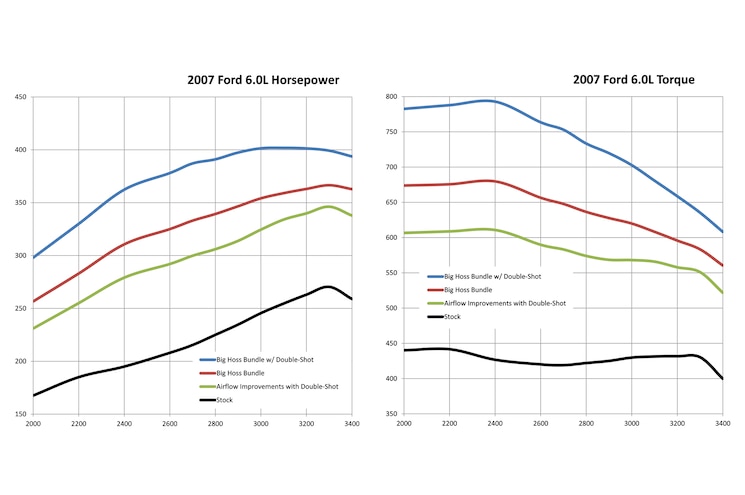 View Photo Gallery | 22 Photos
Photo 3/22   |   These charts show the results of chassis dyno tests performed with the ’07 Ford F-250 in stock condition, and then after the Big Hoss Bundle and Double-Shot water-methanol injection systems were installed. The greatest horsepower improvements were found at 2,700 rpm, and the most additional torque was measured at 2,400 rpm.
The Results
After everything was installed, the engineers at Banks strapped the truck to their chassis dyno and ran through a battery of tests that included 20-second sweeps through 2,700 and 3,400 rpm. The first round of tests measured the 6.0L’s output with no upgrades and found the truck put out 215.4 hp at 2,700 rpm and 426.7 lb-ft of torque at 2,400 rpm at the rear wheels. After all the upgrades were installed, the Six-Gun was put in the Number 1 setting (stock) and the water-methanol system was turned on, which runs the Banks PowerBlend (which is 49 percent methanol and 51 percent water). Those tests resulted in readings of 299.8 hp at 2,700 rpm and 610.8 lb-ft of torque at 2,400 rpm, which was an increase of more than 84 hp and 184 lb-ft of torque. The next set of tests were run with the Six-Gun on Level 6, its highest setting, and with the water-methanol system turned off. This resulted in gains of more than 117 hp and 253 lb-ft of torque, with readings of 330 hp at 2,700 rpm and 679.7 lb-ft of torque at 2,400 rpm. Then, to show off the maximum capability of this setup, the Six-Gun was left on Level 6 with the DoubleShot water-methanol system engaged, which is not recommended while towing. This combination produced the best gains: 171 hp and 366 lb-ft of torque, with a maximum of 402 hp and 793 lb-ft at the rear wheels.
The 6.0L Power Stroke was also taken out on the road for testing with a weighted trailer, which gave the rig a combined weight of 19,290 pounds. It was driven on a level road to test the acceleration, downhill to test the SpeedBrake, and on a steep grade to measure acceleration while closely monitoring EGT, coolant temperature, engine oil temperature, and fuel economy. On the flat portion of the road, the upgrades improved the truck’s 0-to-60-mph times from 26.87 seconds to 17.20 seconds, and the time it took to accelerate from 40 mph to 60 mph was sliced from 16.55 seconds down to 9.70 seconds. The hillclimb tests were performed on a section of road that rises from 3,700 feet up to 6,000 feet, with a grade that starts at 6 percent and increases up to 8 percent. During these tests, the upgrades allowed the truck to cruise at 65 mph in Fifth gear in the same section where the truck could only manage 47 mph in Third gear when it was stock. Even with the improved performance, the operating temperatures remained similar to stock, and although EGT reached 1,406 degrees for a few seconds, it quickly fell right back down to a safe 1,350 degrees, which was 3 degrees less than the stock setup. On a final uphill run, the Double-Shot was used to inject 100 percent water, which resulted in a peak EGT of just 1,333 degrees. Then, the truck was tested going down the same grade used in the uphill tests. During those runs, the SpeedBrake system was able to bring the truck and trailer combination down to just 15 mph without any use of the foot brake.
Data collected during the tests also revealed an improvement of more than 1 mpg while towing, with an increase from 11.2 mpg up to 12.3 mpg. After only two days of work, the 6.0L was making 402 hp and 793 lb-ft at the rear wheels. Not only that, the added power did not come at the expense of seeing higher EGT, coolant, or oil temperatures. Instead, the newfound power is completely usable, we saw a fuel economy gain, and the truck remains smog legal. If you ask us, that’s not bad at all for just a weekend’s worth of work. 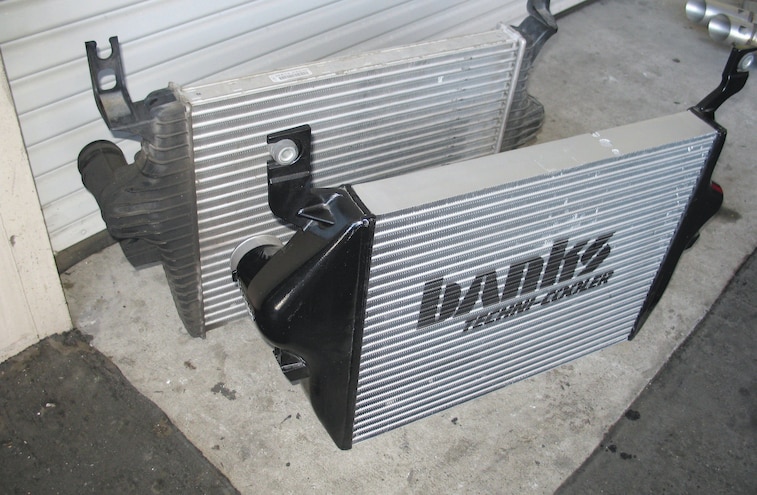 View Photo Gallery | 22 Photos
Photo 5/22   |   2007 Ford F 250 6L Power Stroke Banks Techni Cooler Intercooler
The end tanks are made of cast-aluminum with larger, mandrel-bent 3½-inch orifices, and they are designed to flow more evenly than the plastic factory parts. It fits right into the stock location and takes advantage of the much larger intake tubes that come with the Big Hoss Bundle. 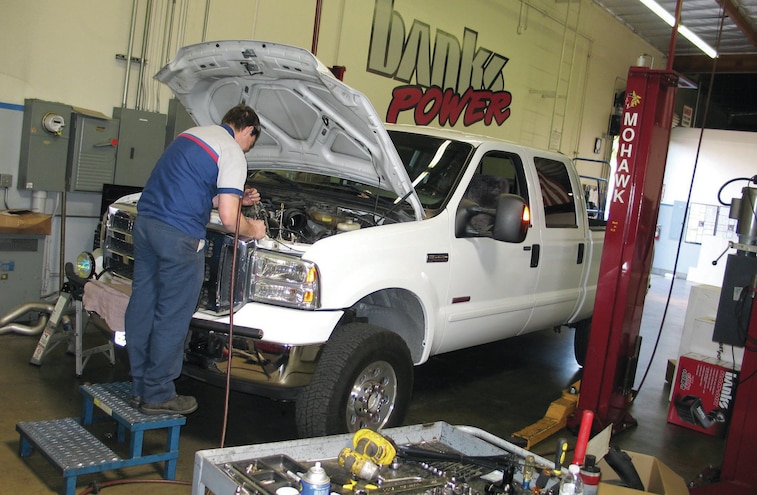 View Photo Gallery | 22 Photos
Photo 8/22   |   2007 Ford F 250 6L Power Stroke Water Methanol Injector Nozzles
Two ports for water-methanol injector nozzles were drilled and tapped in the Banks High-Ram intake manifold before it was installed. Studs are used to secure the manifold and keep it in place—even when the system is under increased boost pressures.

View Photo Gallery | 22 Photos
Photo 10/22   |   2007 Ford F 250 6L Power Stroke Silicone Boots And T Bolt Clamps
Silicone boots and T-bolt clamps are used for all the connections, and a spacer is included that raises the battery and airbox to make room for the larger pipes.

View Photo Gallery | 22 Photos
Photo 13/22   |   2007 Ford F 250 6L Power Stroke Six Gun Tuner Module
The Six-Gun tuner module plugs into the factory computer and sensors to unlock the potential of the upgrades made to the 6.0L by controlling pulse width and timing. It has six programs built in and is capable of increasing output by 171 hp and 366 lb-ft of torque.

View Photo Gallery | 22 Photos
Photo 16/22   |   2007 Ford F 250 6L Power Stroke Straight Shot Water Methanol Injection Controller
The Straight-Shot water-methanol injection controller was mounted in the existing A-pillar pod, giving the driver command of up to two stages of injection based on various inputs. The display has a red LED for alerts, and the display screen can show EGT, boost, percentage of fluid flow, and the percent of throttle being applied.

View Photo Gallery | 22 Photos
Photo 17/22   |   2007 Ford F 250 6L Power Stroke Injection Pump For The Water Methanol System
Hidden away under the truck was the injection pump for the water-methanol system. It utilizes plug-and-play wiring and an anti-vibration mount. The pump is capable of quietly producing up to 300 psi of pressure and has a built-in output pressure switch to detect leaks or low fluid.

View Photo Gallery | 22 Photos
Photo 18/22   |   2007 Ford F 250 6L Power Stroke Banks PowerBlend Water Methanol Mix
A 7-gallon tank was bolted into the bed of the truck for easy access. It was filled with the Banks PowerBlend water-methanol mix during the dyno and road testing, and then with 100 percent water it managed to knock down EGT to 1,333 degrees during a towing test on an 8-percent grade.

View Photo Gallery | 22 Photos
Photo 19/22   |   2007 Ford F 250 6L Power Stroke SpeedBrake Exhaust Brake Control Module
The SpeedBrake exhaust brake control module is made to be a plug-and-play installation and gave the test vehicle the ability to slow from highway speeds down to just 15 mph without having to touch the brake pedal. It plugs into a network hub that connects it to the iQ 2.0 touchscreen controller so it can work in unison with the rest of the system.