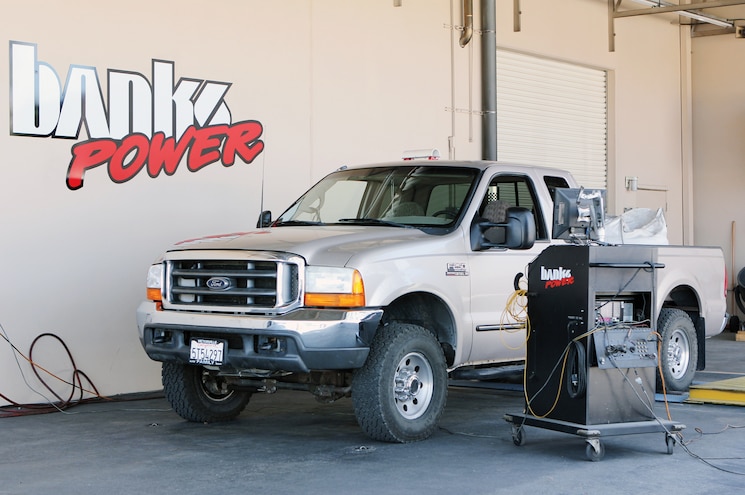 Instead of spending $60,000 on a brand-new truck, you can invest a fraction of that amount in your old workhorse and have a vehicle that can keep up with any modern diesel. The engineers at Banks Power wanted to show us just how viable of an option this was using an early 1999 Ford F-250 Super Duty that one of its customers bought for only $11,000. Unlike any new ¾-ton truck, this one has a ZF-6 manual transmission, no emissions devices to worry about (EGR, DPF, DEF), and, obviously, the coveted 7.3L Power Stroke under the hood. As Gale Banks puts it: “The driver seat will wear out before this truck does.” As an added bonus, the 7.3L was equipped with a prototype of Banks’ brand-new Air Density Gauge—which may change the way people think about tuning their trucks in the future.
Baseline Numbers
Before any upgrades were performed, the Ford Super Duty was strapped to the dyno at the Banks facility to see how much power was making it to the rear wheels in stock form. While the truck housed an unmodified 7.3L Power Stroke, the exhaust system had already been upgraded to a 4-inch Banks Monster system by its previous owner, which helped improve its initial test scores. The 154,000-mile F-250 (40,000 miles) managed to send 205 hp and 432 lb-ft of torque to the rear wheels.
Packing on the Power
To see what the engine was capable of, the technicians in the Banks PowerHouse installation center added a Ram-Air intake and a PowerPack system. This setup includes a Techni-Cooler intercooler, larger 3-inch boost tubes, a Twin-Ram Y-inlet, the company’s Quick-Turbo turbine housing, a High-Boost compressor wheel (for ’99½ and later trucks), a BigHead wastegate actuator, Banks exhaust brake, an iQ controller, and an OttoMind module. These upgrades dramatically increase the amount of air coming into and leaving the engine, allowing the tuner to maximize its potential with boost pressure climbing up to 25 psi, while keeping exhaust gas temperature well within check (peaking at just 1,050 degrees!). These parts can all be installed with common tools. Back on the rollers, the truck made 296 hp and 639 lb-ft of torque at the rear wheels—a 91hp and 207-lb-ft increase.
Water-Methanol Injection
Next, a Straight-Shot water-methanol injection system was added to increase power while still keeping EGT safe. The system was configured to be triggered at 8 psi of boost and smoothly ramp up to full output once the system sees 25 psi. The 7-gallon reservoir was mounted in the bed of the truck and filled with Banks’ PowerBlend, which is 49 percent methanol, 50.5 percent water, and 0.5 percent corrosion-inhibiting additive. This helped increase the truck’s boost level to 27 psi and EGT peaked at just 980 degrees. This upgrade really showed off the potential of the decade-and-a-half-old engine when it made 339 hp and 790 lb-ft of torque. That’s a 134hp and 358-lb-ft gain with bolt-on parts.
Density vs. Boost
Knowing boost is essential to diesel tuning, it’s even better if you can also identify the density of the charge air. This is because density is a measurement of how many molecules are actually inside the manifold and ready to be combined with fuel. The Banks Air Density Gauge used on this truck is a prototype that is in its final stages of development. It’s designed to measure the density of the charge air compared to the ambient air outside the truck and relay that information to the programmer. The measurements taken during the dyno runs showed a dramatic difference in readings when compared to just boost while the Double-Shot system was engaged and filling the intake with a healthy mist of water-methanol. While the boost curves show a decent increase in psi with the water-methanol in the mix, the density sensor reveals how many more molecules are actually being forced into the engine.
The Bottom Line
So, how much does it cost to build up an older Super Duty to perform like a modern truck? Not as much as you think. Banks Power provided typical prices for each of the upgrades to show how this entire buildup, including the cost of the truck, comes in at less than a third of the cost of a comparably equipped ’14 F-250. That’s not a bad price for a truck that’s capable of putting more torque to the rear wheels than any brand-new pickup on the market. Turn to page 174 for the project cost breakdown.

A 1999 Ford F-250 Super Duty with 154,000 miles on the odometer was chosen as the test mule for a host of Banks Power products this month. The truck was purchased for just $11,000 and is equipped with the highly sought after 7.3L Power Stroke, which has a proven track record for reliability and durability. Except for a 4-inch Banks exhaust, the truck showed up at Banks’ facility completely stock and laid down 205 hp and 432 lb-ft of torque on the dyno. Stock, boost pressure checked in at just 17 psi, and EGT peaked at just 850 degrees while on the rollers. 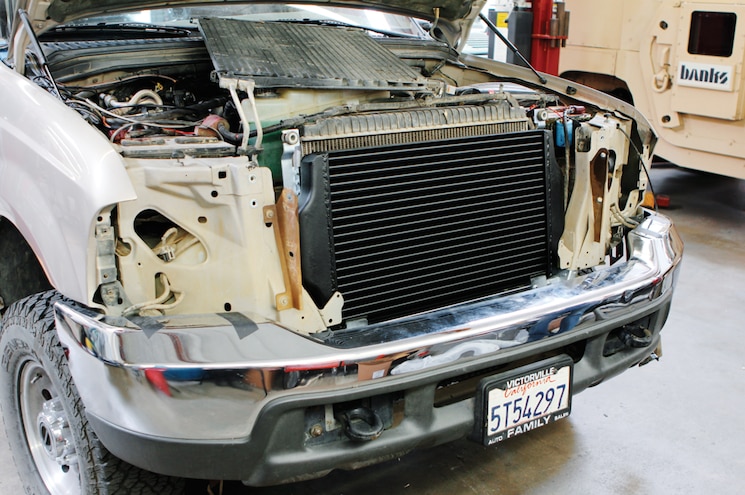 View Photo Gallery | 17 Photos
Photo 2/17   |   1999 Ford F 250 Super Duty Banks Power Tech 01
The 1999 Power Stroke was the first version of the 7.3L to have a factory-installed intercooler, and while that greatly improved performance, the design leaves a lot to be desired. In addition to flowing 18 percent better, the Banks Techni-Cooler intercooler has aluminum end tanks instead of plastic ones that can fail under high boost pressure. 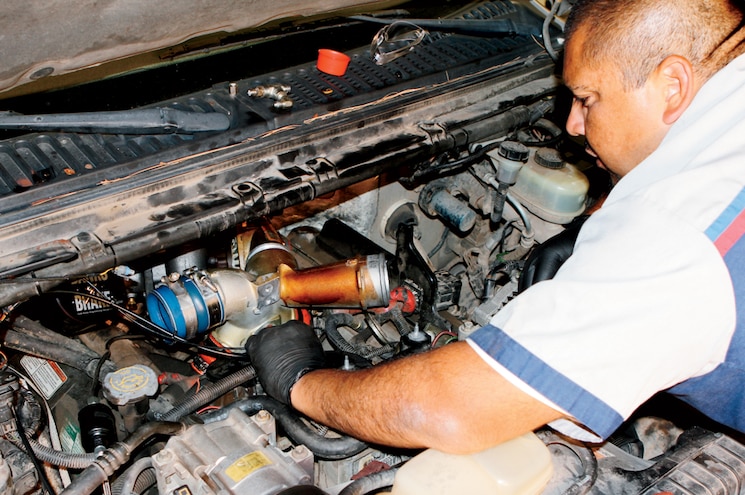 View Photo Gallery | 17 Photos
Photo 3/17   |   1999 Ford F 250 Super Duty Banks Power Tech 02
Also leaving something to be desired, the factory intake manifold has a restrictive design that necks down just after the exit on the compressor side of the turbo. It also splits the intake charge air in a way that deprives one cylinder bank of its fair share of incoming air. 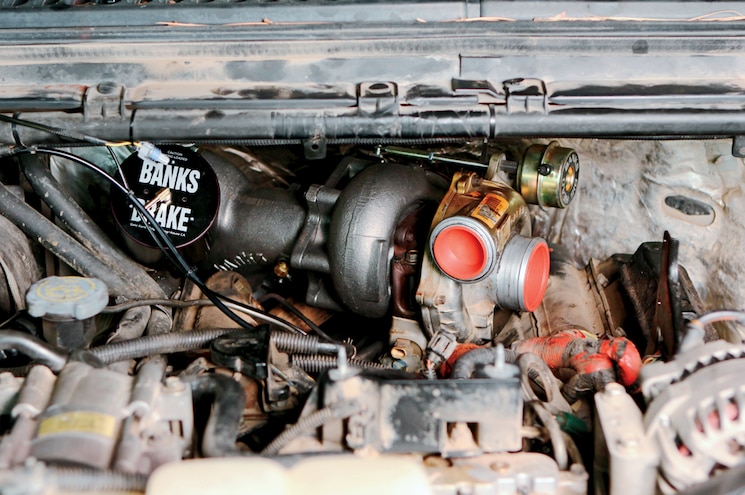 View Photo Gallery | 17 Photos
Photo 7/17   |   1999 Ford F 250 Super Duty Banks Power Tech 06
This Ram-Air cold-air intake system is designed specifically for the 1999 to 2003 7.3L engine bay. It has a completely sealed design that pulls air from behind the grille in addition to the factory location.

View Photo Gallery | 17 Photos
Photo 8/17   |   1999 Ford F 250 Super Duty Banks Power Tech 07
Banks' Air Density Gauge used on our test mule was a prototype of what will soon be available to the public. It uses an exterior density monitor, along with sensors in the intake, to determine the density of the intake charge. The iQ digital dash has a 5-inch touch screen that's packed with features that help modernize the interior of the pre-millennial 1999 F-250.

View Photo Gallery | 17 Photos
Photo 9/17   |   1999 Ford F 250 Super Duty Banks Power Tech 08
The free-flowing 4-inch Monster exhaust system was combined with the Banks Brake exhaust brake elbow, which greatly improves exhaust flow as it leaves the turbo, unlike the restrictive factory downpipe. The catalytic converter is retained to keep the truck California-legal, and the exhaust system is finished with a 5-inch polished tip.

View Photo Gallery | 17 Photos
Photo 11/17   |   1999 Ford F 250 Super Duty Banks Power Tech 10
The high-pressure pump for the water-methanol system was mounted outside the framerail with rubber isolators that prevent vibrations from being transmitted into the cabin. This little pump is capable of producing up to 300 psi and has safeguards that prevent it from running when the tank is empty, or if there is a fault in the system.

View Photo Gallery | 17 Photos
Photo 12/17   |   1999 Ford F 250 Super Duty Banks Power Tech 11
Banks' Straight-Shot water-methanol injection system operates in two stages that are computer-controlled for a smooth progression of injection. The nylon tubing attaches quickly thanks to push-lock connections. The tubing is rated to handle 300 psi, and it's capable of withstanding the extreme temperatures found under the hood.

View Photo Gallery | 17 Photos
Photo 15/17   |   1999 Ford F 250 Super Duty Banks Power Tech Torque Dyno
These charts show the difference between measuring just boost compared to reading the density of the charge air. The boost measurement doesn't take into account the changes in air temperature and cannot take full account of the change in air density inside the intake. This is most evident in the dyno run when the water-methanol was being injected, which made the charge air much more dense. This additional data can be used for more precise tuning on your quest for maximum diesel efficiency.