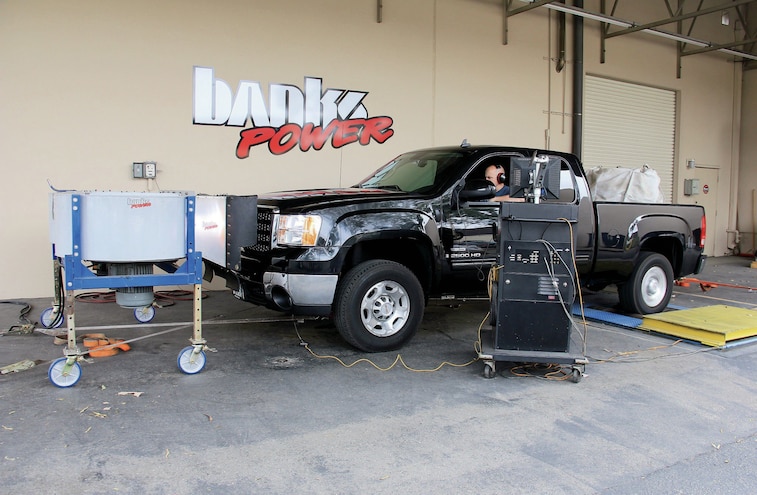 It’s no secret; our late-model clean diesel trucks are quite the performers. They have become painfully easy to make a ton of tire-twisting power. From the factory, they are producing even larger horsepower and torque numbers albeit with a supplement of highly complicated emissions equipment. Don’t get us wrong, these big late-model clean diesel trucks can really haul the hay and give a lot of unsuspecting vehicles entering local on-ramps a run for their money. They’re choked, however, with a plethora of emissions equipment like the Diesel Particulate Filter (DPF) that cuts fuel mileage and, overall, robs power.
Part II: 2009 GMC Sierra 2500HD Gale Banks Big Hoss Bundle Package Install
Our low-mileage ’09 GMC Duramax with the LMM engine in stock trim is an exceptional performer. Returning decent fuel mileage in the city and exceptional mileage -- 24 mpg -- in steady 65-mph freeway traffic, it’s no slouch either. With future plans to run a lift kit, however, a larger wheel and tire combo on this daily driver that would also serve as a weekend racetrack hauler, the writing was on the wall. In our case, we were in need of a quick power adder that wouldn’t sacrifice any of the emission equipment, scorching EGTs or sap fuel mileage in the process. View Photo Gallery | 21 Photos
Photo 2/21   |   2009 GMC Sierra 2500HD Gale Banks Engineering Straight Shot Water Methanol Injection System 19
That said we headed to the Gale Banks Engineering facility in search of exactly what we needed in a bolt-on kit. We’re happy to report that aftermarket superheroes like Banks Engineering have been leading the way when it comes to big-power gains on emissions-controlled diesel engines.
Met with our dilemma, Peter Treydte, Test Group Manager at Banks, suggested their Straight-Shot Water-Methanol Injection system (Double-Shot version PN 45170). In a nutshell, the addition of water-methanol to the combustion process reduces air intake temperatures, which increase air density, and, in turn, reduces combustion temperatures. Essentially, this means more power without the worry of melting down your diesel hauler. Most importantly, it’s all highly manageable through use of the engine’s boost, EGT, or a combination of both.
Of course, we made sure to strap down the truck on the dyno for some before-and-after dyno pulls. Follow along as we show you how to install their bolt-on kit. After the install, we were overly impressed with the amount of power this Duramax laid down with the Gale Banks Engineering Double-Shot Water-Methanol Injection system engaged, picking up 100 hp and 121 lb-ft to the rear tires over stock. 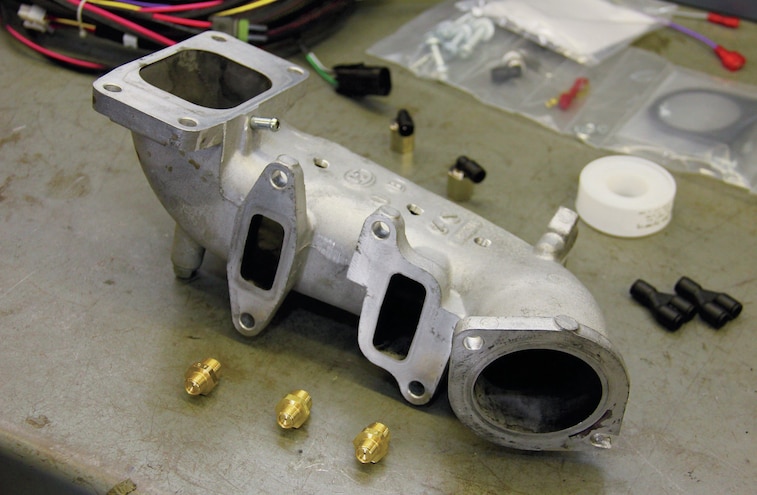 The beauty of this kit lies within the injection nozzles. Whether your build requires the Single-Shot or Double-Shot Water-Methanol Injection kit, Gale Banks Engineering will supply you with a variety of different-sized nozzles to allow for versatility in tuning for individual applications. These injection nozzles provide a 100-degree, full-cone spray pattern. For our application, we went with a #7 primary injection nozzle, followed by a combination of #10 and #14 for the secondary stage. Moreover, Gale Banks Engineering can supply you with nozzles ranging from .75 to 14 gph. 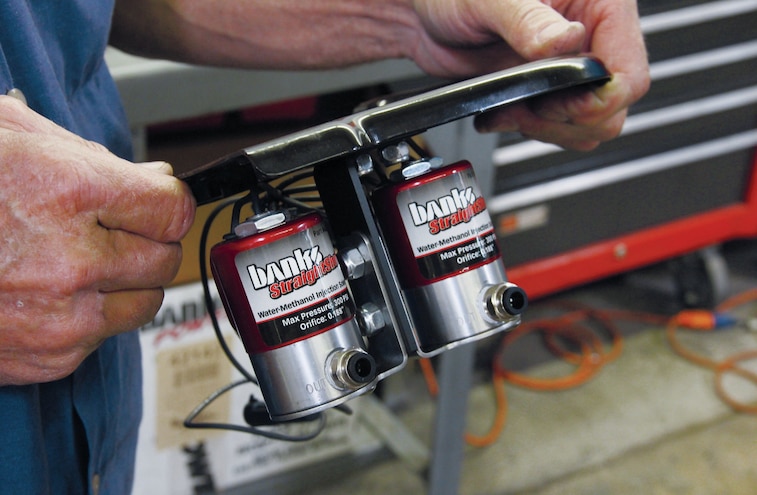 Maximizing flow, the Banks system relies on their solenoids to control an accurate flow of fluid to the nozzles. The dual-stage systems include both a low-restriction check valve for the primary stage, as well as a huge, all-stainless 3/16-inch orifice control solenoid for the second stage. Properly sized components minimize pressure drop prior to the nozzle, maximizing output and atomization. The controller will support a second solenoid in place of the check valve for maximum system performance. Since we were using the Double-Shot (twice the solenoids), we opted to mount each solenoid on the driver-side fender brace. This allowed the fluid lines and wiring to tuck neatly against the firewall safely and out of sight. 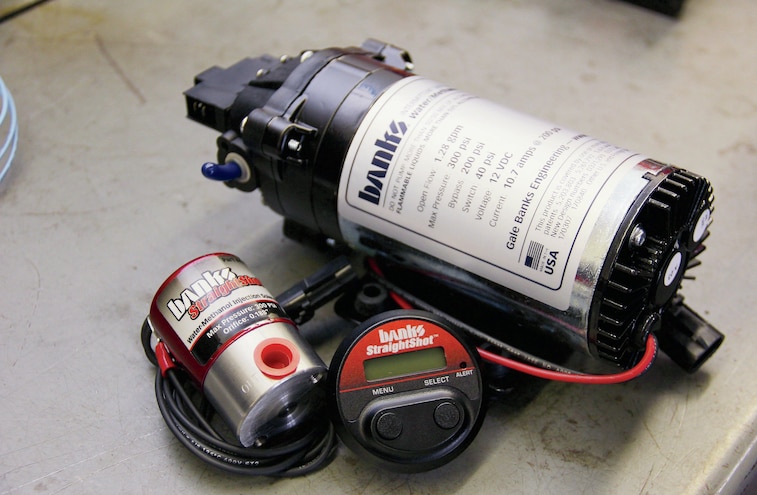 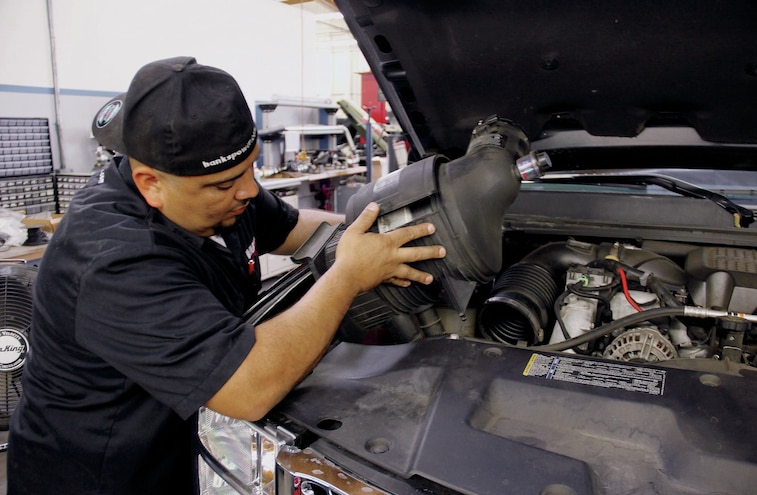 View Photo Gallery | 21 Photos
Photo 6/21   |   1.
1. To get things started, engineering technician Erick Palma systematically removed any and all necessary components to gain access to the intake elbow. In this case, we began with the factory intake box and worked our way across the top side of the engine. 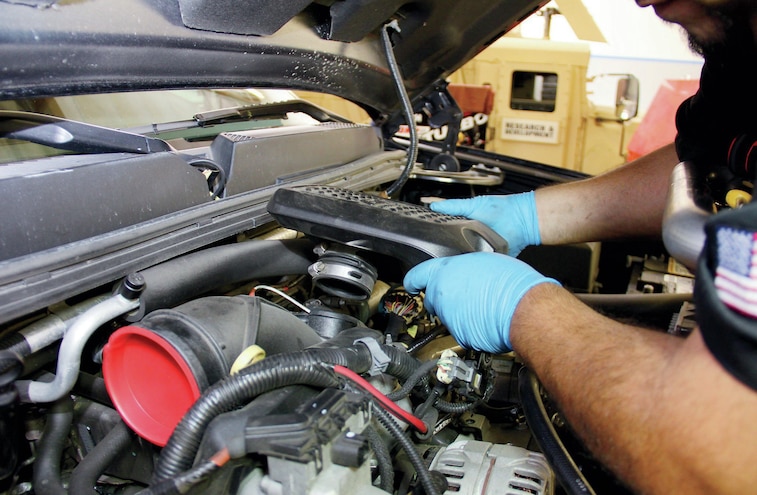 View Photo Gallery | 21 Photos
Photo 7/21   |   2.
2. As we removed each component, it was critical to assure all open ends of the intake were capped to avoid any material or contaminants from entering the engine. After the factory intake silencer was removed, we disconnected much of the factory wiring harness and placed those components to the side. 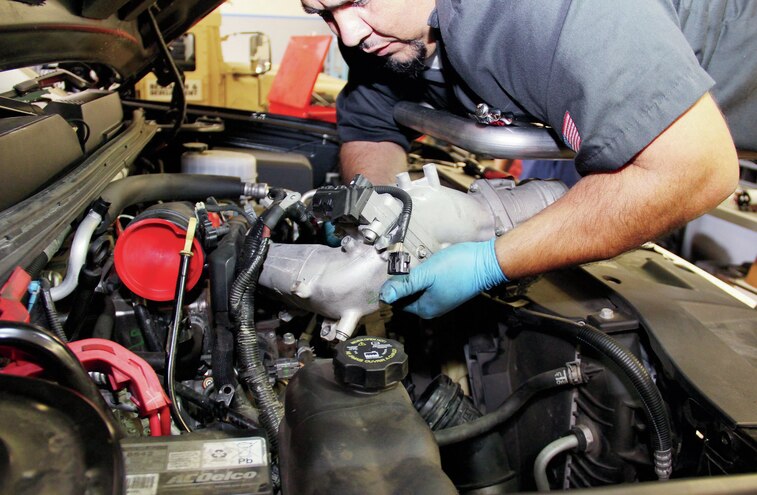 View Photo Gallery | 21 Photos
Photo 8/21   |   3.
3. After exercising a considerable amount of patience, Palma was able to fish out the intake elbow. Keep in mind, the exhaust gas recirculator (EGR) valve and intake manifold surfaces use a Multi-Layer Steel (MLS) gasket. This means they can be reused. We placed them to the side for later use and prepped our intake elbow for the Double-Shot Water-Methanol nozzles supplied with the kit. 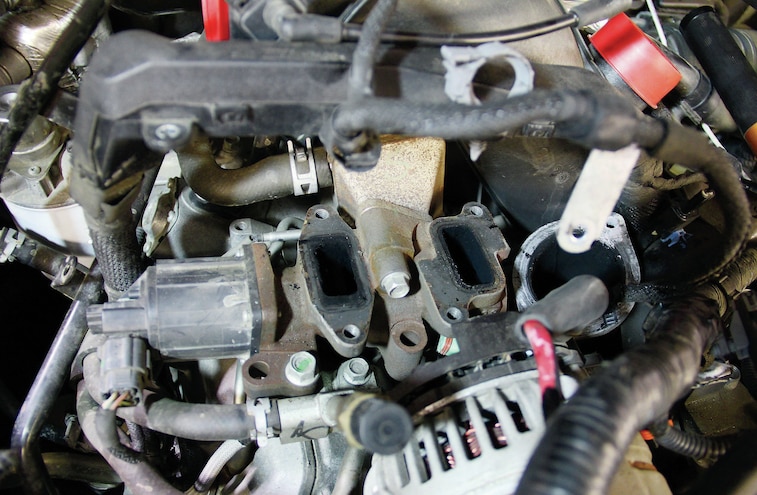 View Photo Gallery | 21 Photos
Photo 9/21   |   4.
Here, the twin rectangular ports show the factory-installed EGR and round intake manifold port. It’s important to note that these ports were capped and covered up to avoid any dropped parts or components. 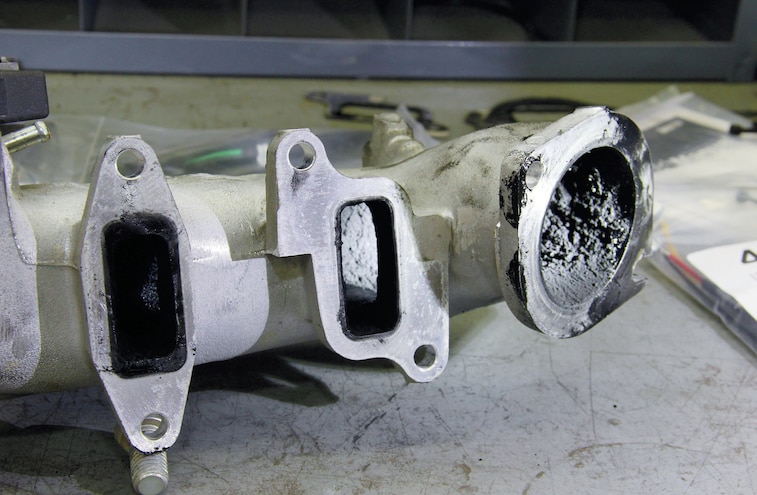 View Photo Gallery | 21 Photos
Photo 10/21   |   5.
5. We were surprised at the level of particulate matter, which was heavily caked inside the intake manifold. Before we reinstall this intake elbow, we’ll be sure to give this a wash in solvent for a fresh start on its new life with the Water-Methanol nozzles. 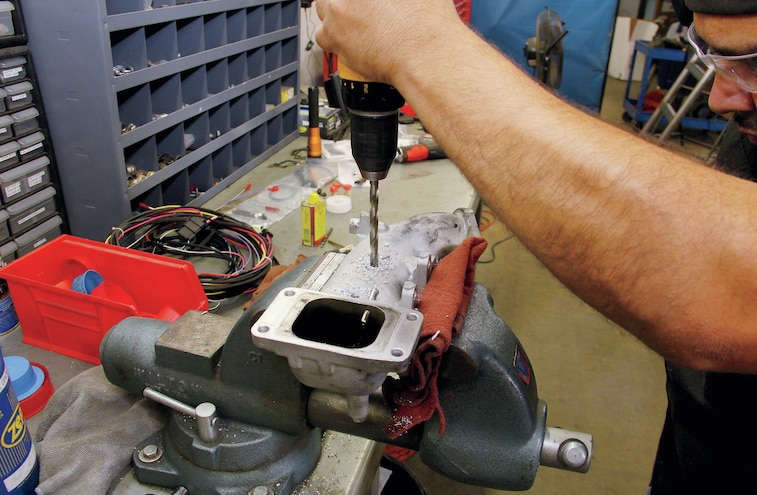 View Photo Gallery | 21 Photos
Photo 11/21   |   6.
6. With the manifold out, Palma began the process of drilling and tapping for each Water-Methanol Injection nozzle. In our case, since the Double-Shot was being installed, we would be drilling one hole for the primary stage nozzle and two additional holes for the secondary stage nozzles. Palma placed the intake in a vice and, with the nozzle’s location marked, began to drill for each one into the side of the manifold, which faces the front of the truck. 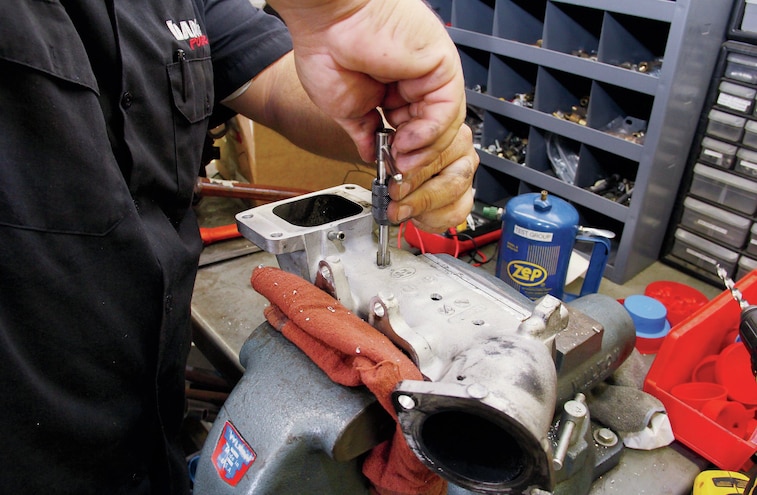 View Photo Gallery | 21 Photos
Photo 12/21   |   7.
7. Here, Palma takes careful note for the location of each Injection nozzle and taps each hole for the supplied nozzles 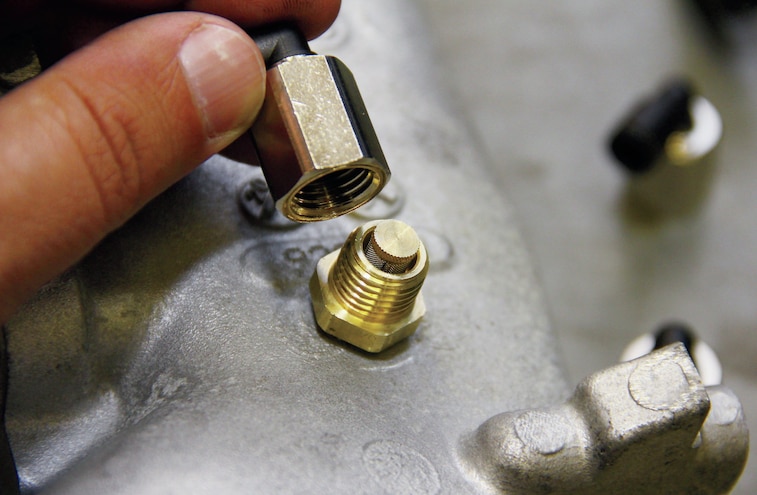 View Photo Gallery | 21 Photos
Photo 13/21   |   8.
8. These high-quality brass injection nozzles are specifically designed to achieve optimal atomization of the water-methanol mixture over a wide pressure range. Before we threaded in each nozzle with Teflon tape, we first gave the manifold a thorough solvent bath to remove any drilling material. Each nozzle is designed with a stainless steel screen to prevent any debris (if any) out of the nozzle and ultimately, out of your engine. 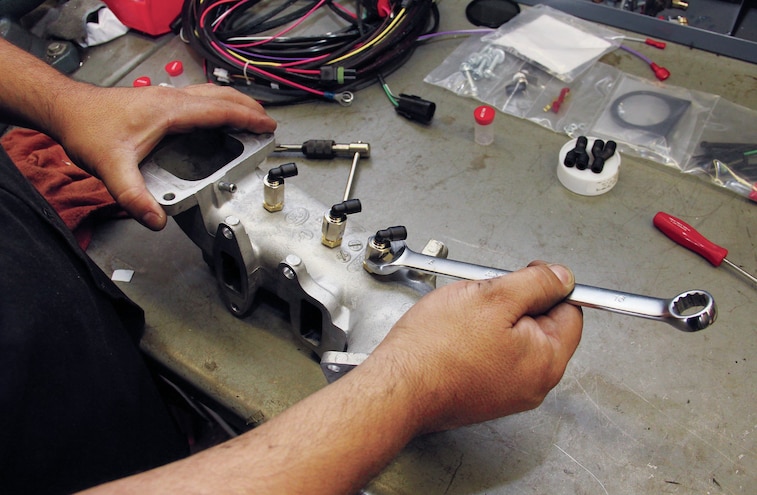 View Photo Gallery | 21 Photos
Photo 14/21   |   9.
9. The injection nozzles couldn’t be any simpler to install. Using a 5/8-inch open wrench, Palma locked down each of the 90-degree push-lock stainless swivel fittings onto each nozzle. From there, Palma reinstalled the manifold using the factory gaskets. 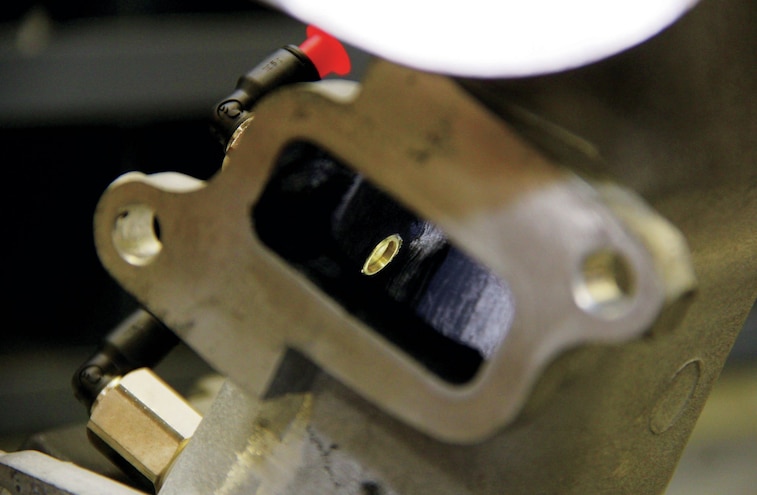 View Photo Gallery | 21 Photos
Photo 15/21   |   10.
10. Here, we illustrate a quick look into the intake manifold elbow. Palma explained, “You’ll want the nozzle to sit flush on the inside of the manifold.” This will allow the water-methanol to enter and atomize with the incoming air without interrupting flow. 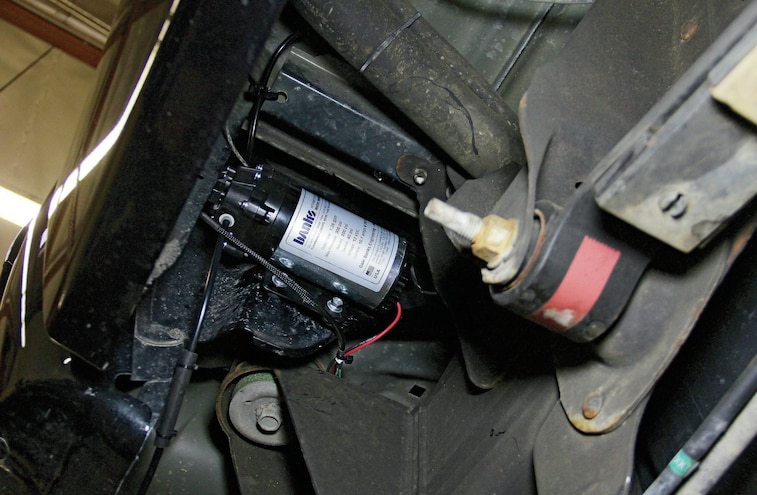 View Photo Gallery | 21 Photos
Photo 16/21   |   11 .
11 . The pump can be mounted in nearly any location. In our case, we decided behind the cab would suit our needs best. This would keep the pump safe and out of the way, allowing it a long life. We fed the lines up through the bed to the reservoir tank. Then, we ran the lines against the driver-side framerail to the solenoids in the engine bay. 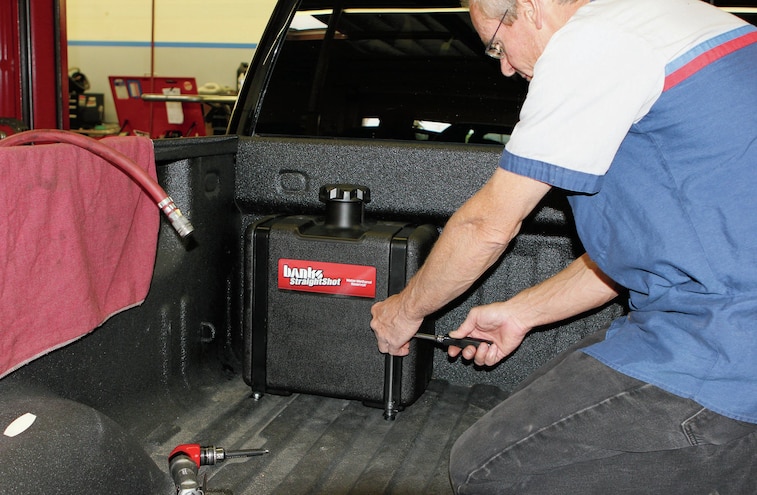 View Photo Gallery | 21 Photos
Photo 17/21   |   12.
12. Gale Banks Engineering offers a variety of fluid reservoirs (¾, 2½, 5, or 7 gallons) for nearly any application depending on specific needs. While the smaller underhood tank is available, we opted for the larger 7-gallon tank, which we mounted in the bed of the truck with the supplied straps and hardware. The best part is that the cap is even designed with an integrated breather to keep heat and pressure out. 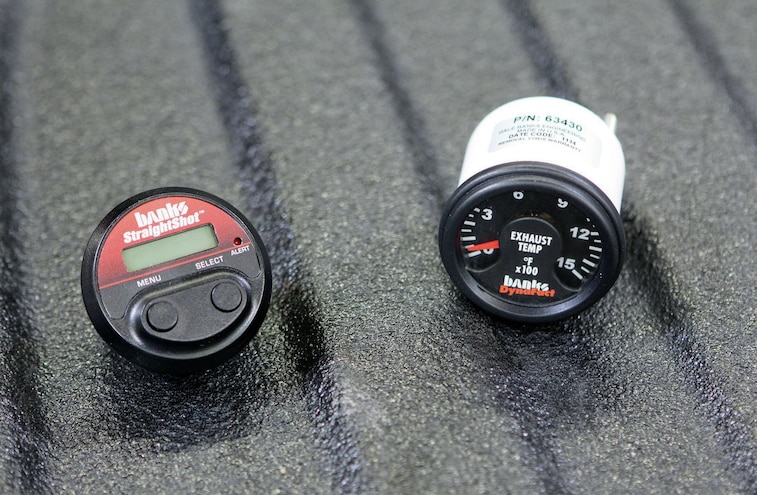 View Photo Gallery | 21 Photos
Photo 18/21   |   13.
13. The brains of operation are all within the compact injection control unit. This ingenious LCD head unit is simple to operate yet sophisticated enough to handle operating and controlling the water-methanol injection and pulling double duty as a multifunctioning gauge. 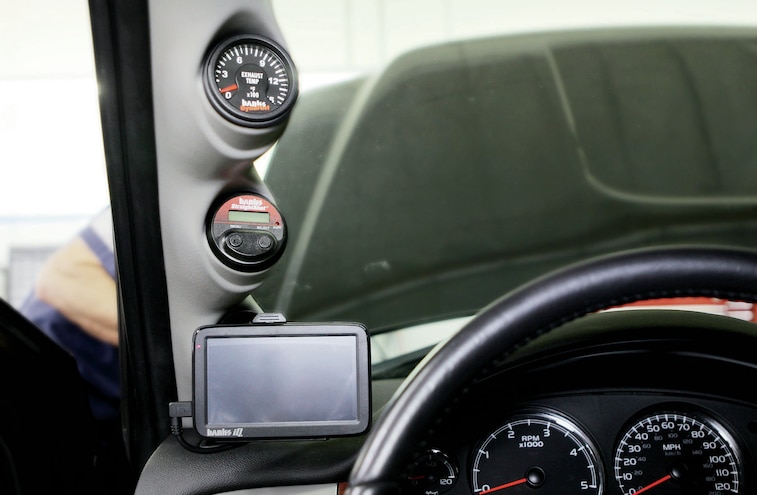 View Photo Gallery | 21 Photos
Photo 19/21   |   14.
14. For tuning, users can dial in pump duty cycle for certain trigger and end points for each stage of injection. The head unit will also display boost, throttle position percentage (TPS), EGT, as well as indicating system activity and any errors within the system. With simple wiring using plug-and-play connectors, we got the gauge mounted in a pod pillar and connected to our MAP sensor for an easy-to-use and fully functioning display. 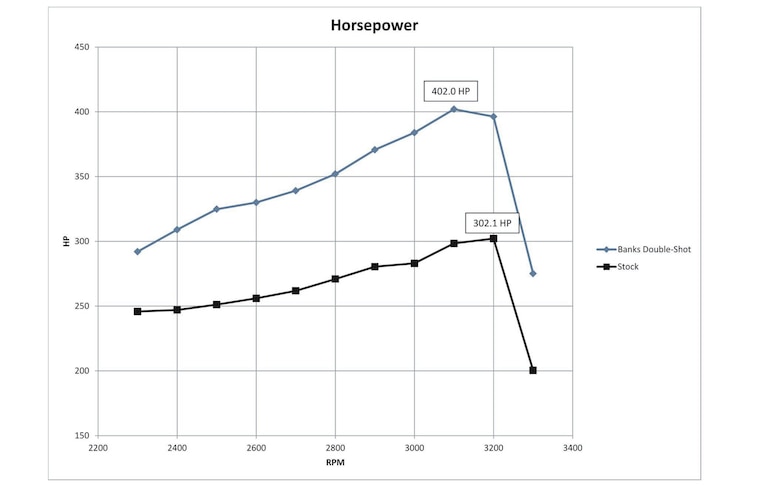 View Photo Gallery | 21 Photos
Photo 20/21   |   2009 GMC Sierra 2500HD Gale Banks Engineering Straight Shot Water Methanol Injection System 17
In stock form, our 2009 LMM Duramax laid down an impressive 302 hp and 561.3 lb-ft to the rear tires with a maximum boost of 29 psi at 1,277 F EGT. Of course, with our Double-Shot Water-Methanol injection system activated, the Duramax squatted and laid down 402 hp and 682.3 lb-ft at 32 psi with only a 50-degree increase (1,326 F) in EGT. Do the math. With only the addition of the injection system, our Duramax picked up an additional 100 hp and 121 lb-ft to the rear tires. Keep in mind, our Duramax is still utilizing all of its factory emissions equipment and remained well within safe EGT temperatures. On the subject of emissions, Banks always seeks to make their products emissions compliant, and this system is in the early stages of emissions testing.

- OF
By Sean Haggai
40 Articles