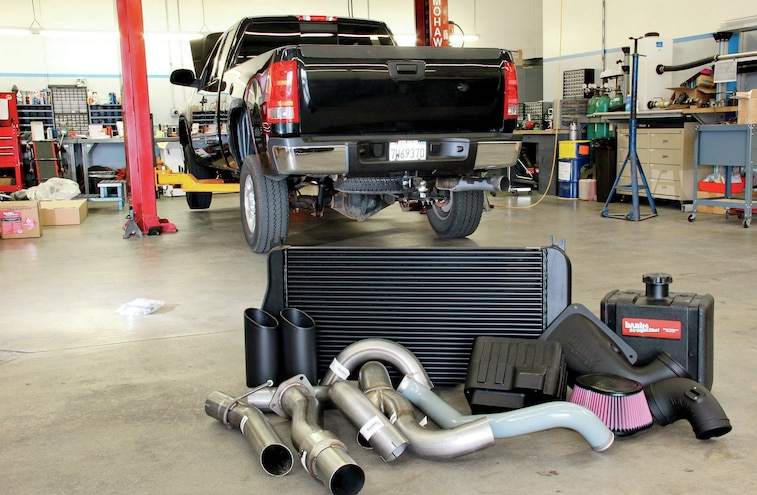 Last month we left you with our amped-up 2009 GMC LMM Duramax; proudly huffing on a blend of water-methanol thanks to the Gale Banks Engineering Double-Shot Injection system. On the rollers, our LMM Duramax picked up 100 hp and 121 lb-ft to the rear tires over stock. To say we were impressed with the performance of the 6.6L Duramax with the addition of the Water-Methanol Injection system would be a complete understatement. Everyday driveability remained exactly the same as stock. However, stomp the pedal to build some boost and the Water-Methanol Injection system really lit the fires -- easily frying the tires with a rolling burnout. Of course, as with any build, we were far from done in the power department -- we were after more.
Part 1: 2009 GMC Sierra 2500HD Gale Banks Engineering Water-Methanol Injection System - Tech and How-to
This time we were back at the Gale Banks Engineering facility in Azusa, California, to take full advantage of the Water-Methanol Injection system by increasing airflow and fuel demand overall. Banks recommended their CARB-approved Big Hoss Bundle, which consisted of a Six-Gun Diesel Tuner with iQ 2.0 Man-Machine interface, Technicooler Intercooler system, Ram-Air Intake system, and Monster Dual 4-inch exhaust with matching black tips.
The Banks Six-Gun Tuner will allow live, full monitoring of the truck’s vitals and on-the-fly power level (1-6) changes with a simple click from the iQ 2.0, 5-inch monitor screen. To combat sweltering underhood intercooler temperatures and the potential for the factory intercooler to fail between the aluminum core and crimped plastic tank, we also took advantage of an all-new and larger Banks Technicooler intercooler. The Technicooler Intercooler also benefits from sweeping bends, which results in less boost lost; allowing for a cooler charge to hit the combustion chamber. Finally, taking advantage for even more airflow, we installed the Banks Ram-Air kit and benefited from a more aggressive look and tone with better flow from the full Monster 4-inch DPF-back exhaust. We finished it off with a set of handsome satin black Banks tips.
With the truck back at the Banks Engineering R&D Facility, we got right to work bolting on the complete Big Hoss Bundle to our LMM Duramax. Whether it’s for work or play, loaded or unloaded, the Banks Engineering components do not disappoint. After our complete install, we headed back to the rollers for a final dyno pull. All said and done, our Duramax laid down 466 hp and 808 lb-ft of torque to the rear tires on the Banks Engineering Level 6 tune with the Double-Shot Water-Meth injection system activated. What’s more, it did all of this completely safe and smoke free! Follow along as we add more power to our 2009 GMC LMM Duramax! View Photo Gallery | 16 Photos
Photo 2/16   |   1.
1. Back at Gale Banks Engineering, we began by first disconnecting the main battery. From there, since we’ll need access to the factory intercooler, we started by removing the stock airbox along with its tube. 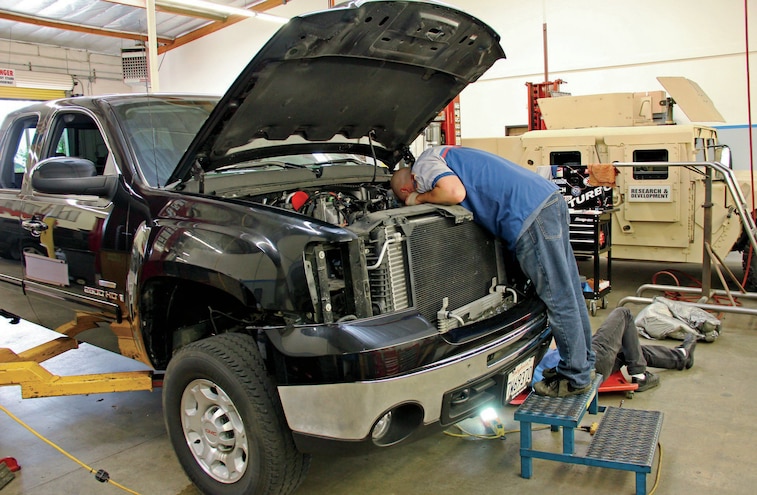 View Photo Gallery | 16 Photos
Photo 3/16   |   2.
2. Next, our man Ross Korns took the helm and began tearing down the front of the Duramax. After the stock intake was removed, we removed both headlights and much of the supports and hardware that fortify the factory air-conditioning condenser and intercooler. Then, Korns carefully pulled out the stock intercooler. 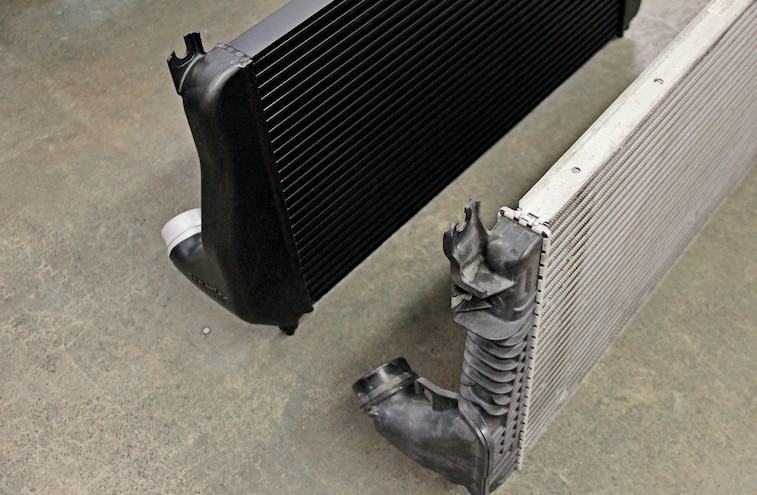 View Photo Gallery | 16 Photos
Photo 4/16   |   3.
3. Side by side, you can clearly see the benefit of the much larger Banks Engineering Technicooler Intercooler. In this case, size does matter. With a thicker core and massive aluminum tanks on each side, the Banks Technicooler Intercooler is 23 percent larger than stock, allowing for improved air density. This means a higher volume of colder dense air for more power and lower EGT. It’s also been precision welded to assure no leaks and a long life in your heavy-duty truck. 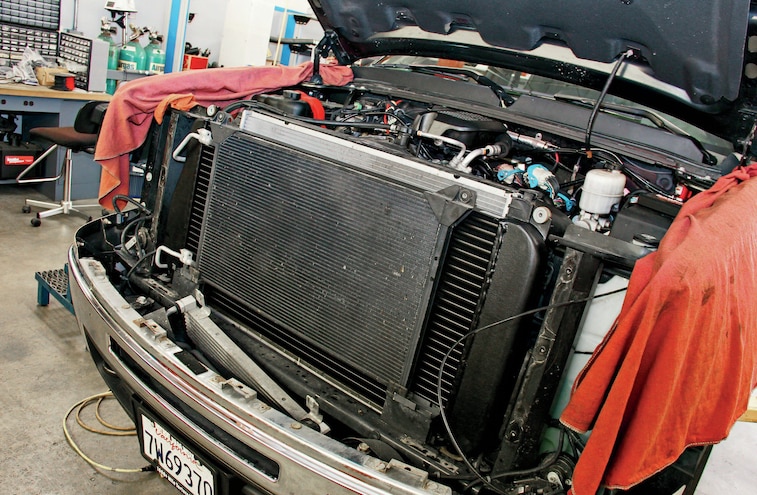 View Photo Gallery | 16 Photos
Photo 5/16   |   4.
4. Carefully, the Gale Banks Engineering crew slid the new intercooler into its factory location. Before we locked it down for good, we made sure it was saddled in its correct location and made sure there was no damage to the cooler fins. 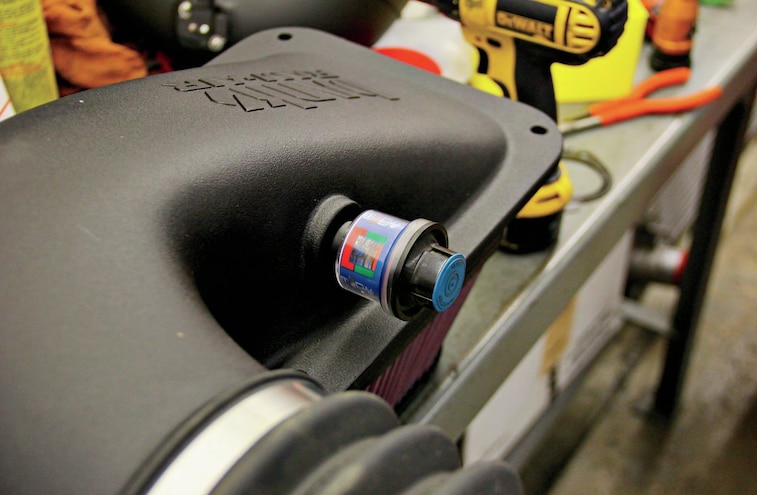 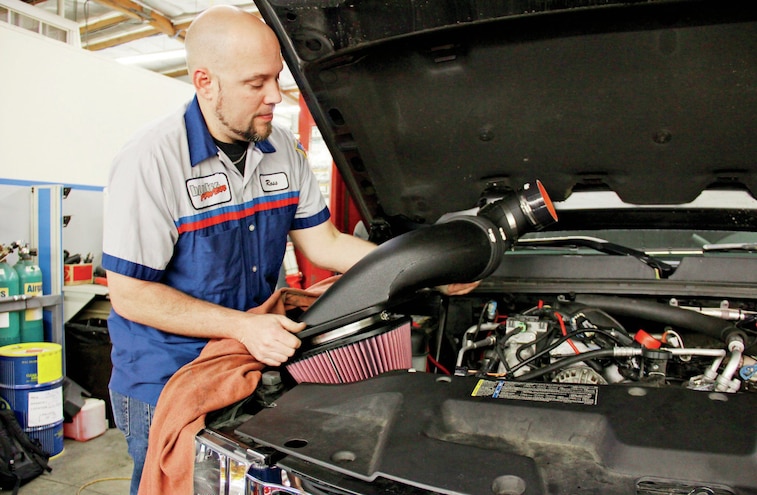 View Photo Gallery | 16 Photos
Photo 7/16   |   6.
6. From there, we installed the lower portion of the airbox into the factory mount location. Then, we added the giant filter to the huge, upper Ram-Air lid. The low-restriction molded inlet tube was then installed with the 5-inch bellows to the factory turbo. 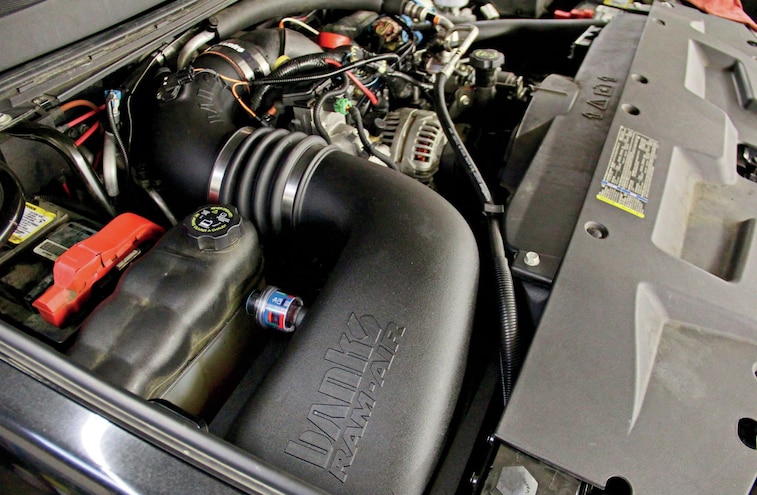 View Photo Gallery | 16 Photos
Photo 8/16   |   7.
7. With the Banks Ram-Air installed, it’s easy to see how much larger and more attractive this is over the restricted, factory unit. The air coming into the turbo will now have straight shot from the filter with little to no restriction. Better yet, it all fit just like the factory unit! 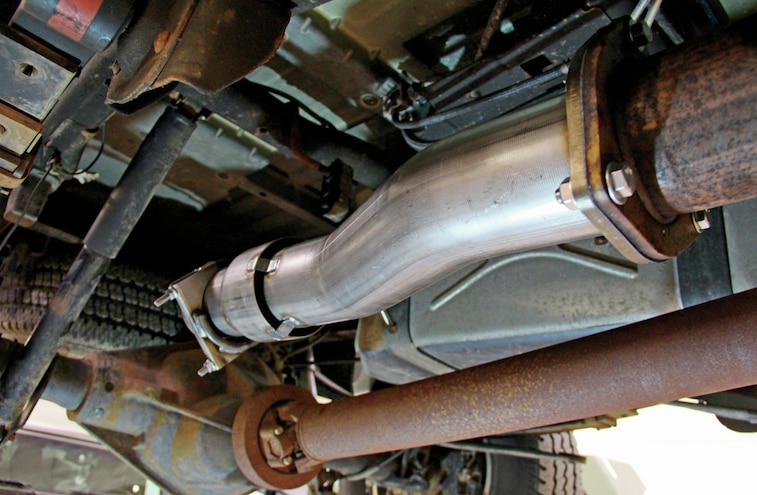 View Photo Gallery | 16 Photos
Photo 9/16   |   8.
8. Moving on, we got the Duramax on the lift to gain access to the restrictive factory exhaust. As to not interfere with any of the factory emissions or equipment on the truck, Banks has developed a DPF-back exhaust system to increase overall flow in a bolt-on kit. Here, we attach the unique Cool Cuff-designed 4-inch pipe fortified with new hardware. 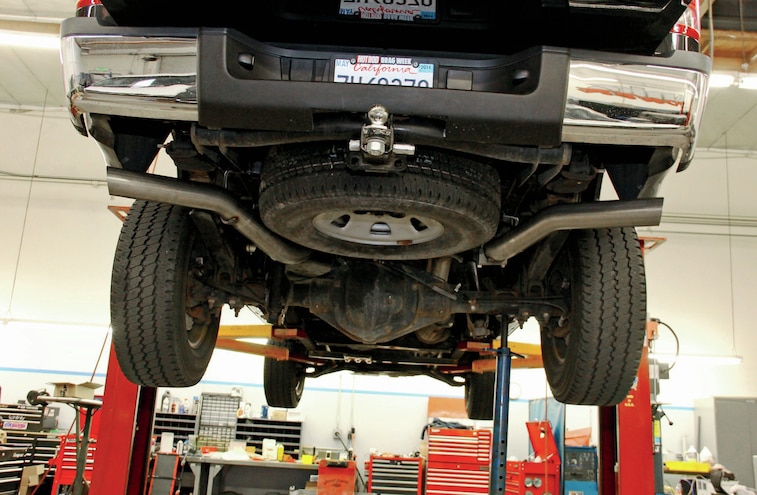 View Photo Gallery | 16 Photos
Photo 10/16   |   9.
9. Since we opted for the Monster dual exhaust kit (single side exit Monster exhaust is also available), a unique, 4-inch Y-pipe is used to split the exhaust to both rear sides of the truck. With some patience, we had the Y-pipe and both coordinating exit pipes installed using the factory hangar locations in no time. We left all the connections loose until we had each exit pipe even on both sides. Then, we tightened the included clamps working from front to back. 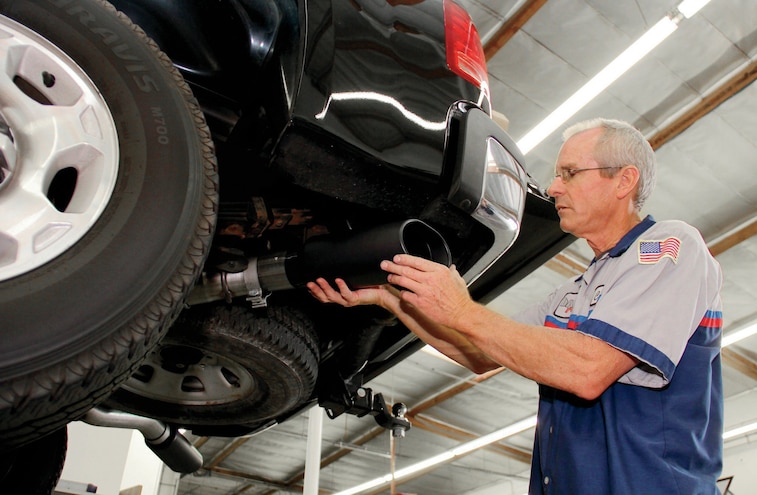 View Photo Gallery | 16 Photos
Photo 11/16   |   10.
10. To finish off our Monster dual exhaust kit, we installed a set of the Banks satin black tips, although polished stainless tips are also available. For the time being, we clamped these on the ends of each pipe, however, will be welding them in at a later date. 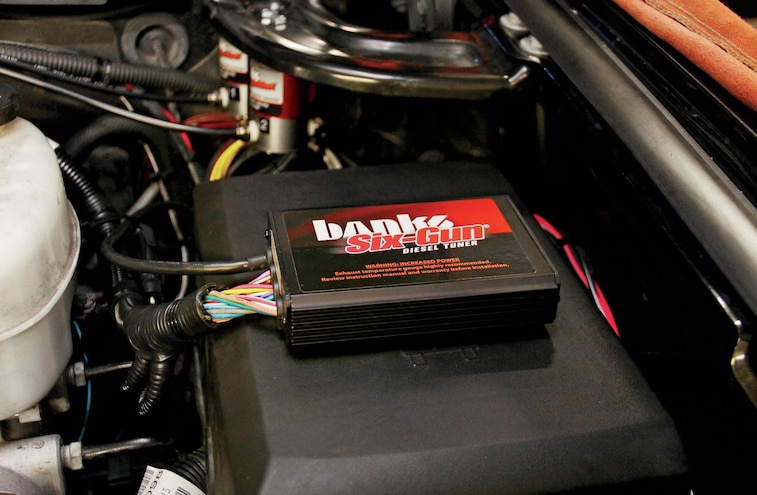 View Photo Gallery | 16 Photos
Photo 12/16   |   11.
11. Of course, the brains of the entire operation rely on the Banks Six-Gun tuner. We mounted the tuner onto a perfect location on the fuse box cover. Using the supplied two-sided adhesive strips, we mounted it firmly into place. This location also allows for easy access to the factory ECU connections and midway point to the Banks iQ 2.0 monitor in the cab. 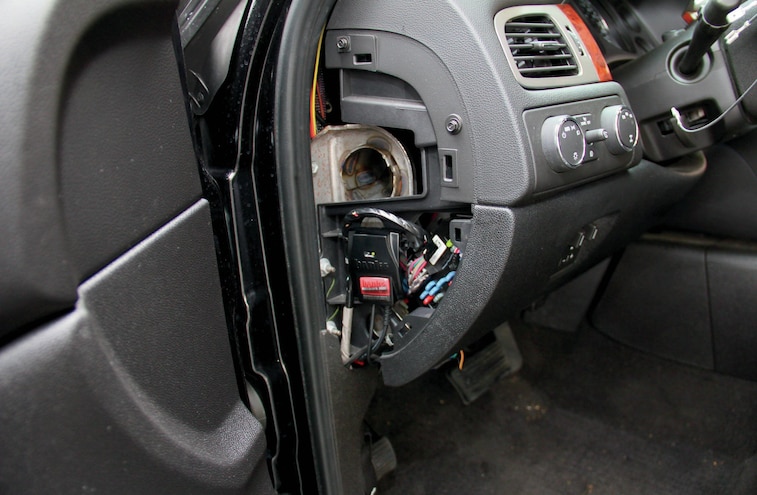 View Photo Gallery | 16 Photos
Photo 14/16   |   13.
13. Important to any turbocharged engine is exhaust gas temperatures and monitoring those accurately. For this, we needed to install our thermocouple, which monitors exhaust temperatures. To start, we drilled a 7/16-inch hole that was drilled 2¼ inches back from the exhaust manifold’s exit flange. We then tapped our new hole using a ¼-inch NPT pipe tap. From there, the thermocouple fitting was given a coat of antiseize compound and then carefully threaded into the exhaust manifold. 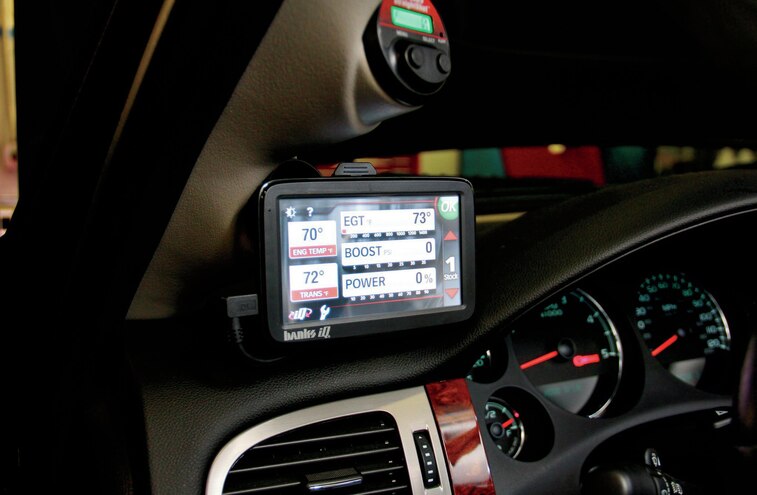 View Photo Gallery | 16 Photos
Photo 15/16   |   14.
14. The beauty of the Banks iQ has got to be the multitude of functions, options, and viewing parameters available in one, easy-to-use system. Essentially a mini PC, the Banks iQ dashboard allows for engine data displays such as boost, speed, rpm, engine and oil temp, oil pressure, fuel rail pressure, and, of course, EGT. What’s more, the Banks iQ even allows users to read and clear engine codes and to set parameter alarms for engine functions. That’s not all either. The dashboard will also log quarter-mile, eighth-mile, and 0-60 speeds as well. View Photo Gallery | 16 Photos
Photo 16/16   |   15.
15. For clarity, we’ve included all of the dyno pulls from our initial baseline run to our Banks Big Hoss Bundle set to Level 6 with added Banks Double-Shot Water-Methanol injection activated. Using the Banks iQ 2.0 dashboard and set to Level 6 we made our final dyno pull with our ’09 GMC Duramax. Interesting to note, our Duramax made the most power to the rear tires with the minimal increases in EGT on Level 6 with Water-Meth activated. Without a doubt, the Water-Meth injection was adding more power on top of the ECU tune well within safe operating temperatures. Any guess on what this 808 lb-ft Duramax will do in the quarter-mile?

- OF
By Sean Haggai
40 Articles