Upgrades To Keep The Tow Truck Away 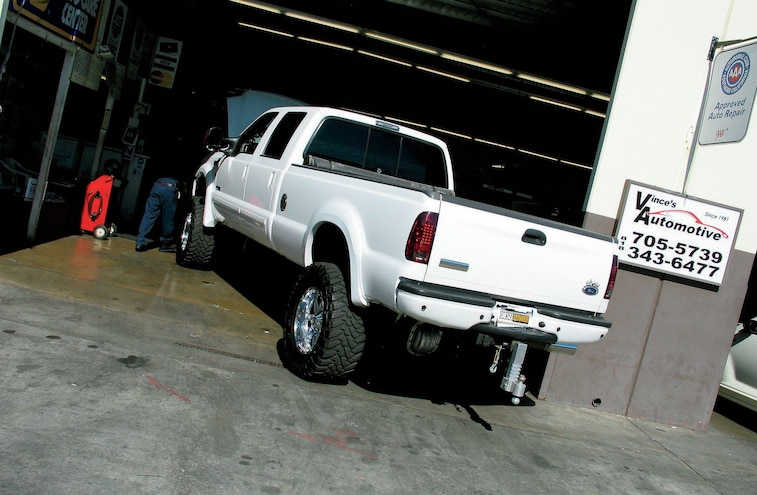 The 6.0L Ford Power Stroke engine has developed a bit of a bad reputation, but with some strategic upgrades, you can put a lot of fears to rest. Some of the most common 6.0L failures we hear about involve the exhaust gas recirculation (EGR) system and the engine oil cooler. Unfortunately, neither of these parts is easy to access. Companies such as Bullet Proof Diesel have upgrades designed to specifically address weaknesses that can cause the factory parts to fail. Here’s how the crew at Vince’s Automotive in Reseda, California, recently helped a diesel owner avoid some major downtime in his lifted ’03 Ford F-350 by diagnosing some common 6.0L problems and then beefing-up the EGR and fixing the oil coolant system.
Showing Symptoms
The owner of this truck, Alan Morales, started noticing some hints of white smoke coming from his tailpipe when the truck had just 55,000 miles on the odometer. Alan bought the truck new and had made some performance upgrades, including a K&N cold-air intake, along with a programmer, intercooler system, intake manifold, and exhaust by Banks Power. Alan admits to having a heavy throttle foot, so it wasn’t a big surprise when the 6.0L engine started showing signs of strain. Luckily, he got the truck into the shop for a checkup before the wisps of white smoke turned into a cloud around a lifted pickup stuck on the side of the highway.
The Diagnosis
White smoke and low coolant levels are signs antifreeze is making its way into the engine’s cylinders—where it doesn’t belong. On many vehicles, this is an indication of head gasket failure, but with the 6.0L Power Stroke engine, it often means the EGR has developed internal cracks that are allowing coolant into the exhaust that is re-burned by the engine. Removing the EGR valve revealed it was not gummed-up, but the team at Bullet Proof Diesel points out that the EGR valve can actually look “steam cleaned” when enough coolant is invading the EGR system.
The oil cooler in the 6.0L engine can also be a source of problems because it has to deal with the oil heated by the HPOP, which supplies the high-pressure oil needed to operate the injectors. Unlike a common-rail-fueled engine (which injects fuel that’s already under high pressures), the 6.0L engine uses engine oil to pressurize the fuel inside the injectors. The oil cooler has to deal with the heat that’s added by this process and often reveals itself as a weak link in the 6.0L setup. In addition to dealing with the high temperatures, the oil cooler utilizes small internal passageways that can become clogged with particles in the coolant and oil, which can often lead to failure as early as 50,000 miles. This restriction can be the root of many problems experienced by 6.0L owners.
The Treatment
It was determined that both the EGR cooler and the oil cooler needed to be replaced to keep this 6.0L engine running reliably. Bullet Proof Diesel’s upgraded EGR cooler and a Ford replacement oil cooler were ordered to help make that happen. The EGR cooler is a street-legal unit that’s a big upgrade from stock and designed to work with everything from a factory engine computer to a high-horsepower programmer without triggering engine trouble codes. The oil cooler is a direct-replacement unit that will help the truck work like new again. With both parts in place, the truck should stop blowing white smoke and, more importantly, it should no longer be prone to a massive failure. Here’s how the crew at Vince’s Automotive helped save this 6.0L Power Stroke by fixing some common problems before they could cause an inconvenient breakdown.