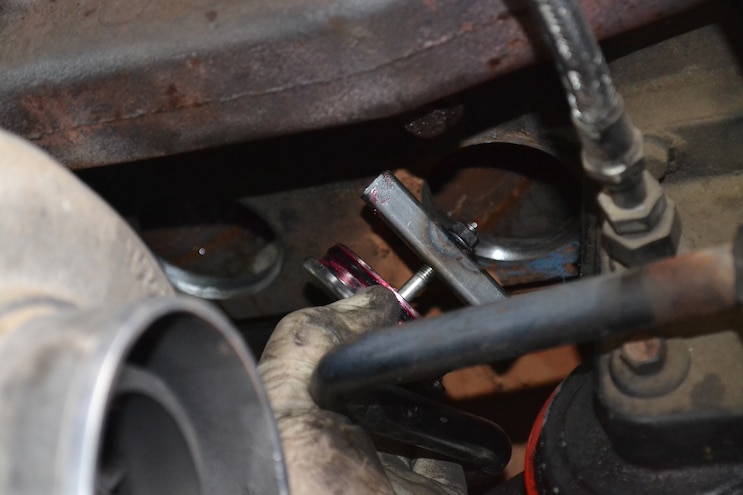 Perhaps one of the most overlooked aspects of a high-performance diesel engine is its cooling system, which is often left completely stock while the rest of the powerplant is built to the hilt. On modified ’89-to-’16 Cummins engines, the factory cooling system presents a particularly interesting problem: High engine speeds create too much water/coolant pressure, which can actually blow a factory freeze plug clean out of the block and spew the engine’s coolant everywhere.
While losing every drop of antifreeze or water can be pretty demoralizing, it’s also dangerous. In drag racing applications, a blown freeze plug can send water under the rear tires and cause a truck to spin, hit a wall, or worse. We know of more than one drag vehicle that’s been wrecked in this manner, so it’s definitely an issue that needs to be considered.
There are a number of different ways to combat over-pressurizing. For racing applications, one of the more common fixes involves clipping the fins on the water pump, which reduces high-rpm pressure. For street trucks, another remedy involves installing a coolant bypass, which reduces pressure at the back of the block. However, perhaps the easiest solution is using blow-proof core plugs that replace the original pieces.
While a blown freeze plug is a common failure for modified engines that turn upward of 4,000 rpm, we managed to kick a rear plug out of the 5.9L Cummins in an ’89 Dodge D250. The failure happened at 3,800 rpm, which is indicative of the kind of high pressure a cooling system experiences at elevated engine speeds. After replacing the failed freeze plug at the back of the engine (“Freeze Plug Fix,” Feb. ’12), we decided to also tackle leaking side plugs by replacing all of them with a set of performance-oriented, blow-proof freeze plugs from Keating Machine. The machined plugs feature a backing bar that makes them virtually impossible to blow out—no matter what the engine speed. Since the ’89 D250 is two-wheel drive and is run on racing slicks (potentially the most dangerous setup), the billet side plugs are a cheap investment that will help protect the truck from damage caused by an accident on the dragstrip.
With the help of our buddy Steve Ellis at Speed Garage in Chico, California, we replaced the 12-valve’s leaking original freeze plugs with Keating’s blow-proof versions in just one hour, and we left the shop with the confidence that the coolant will now stay where it belongs—inside the engine. 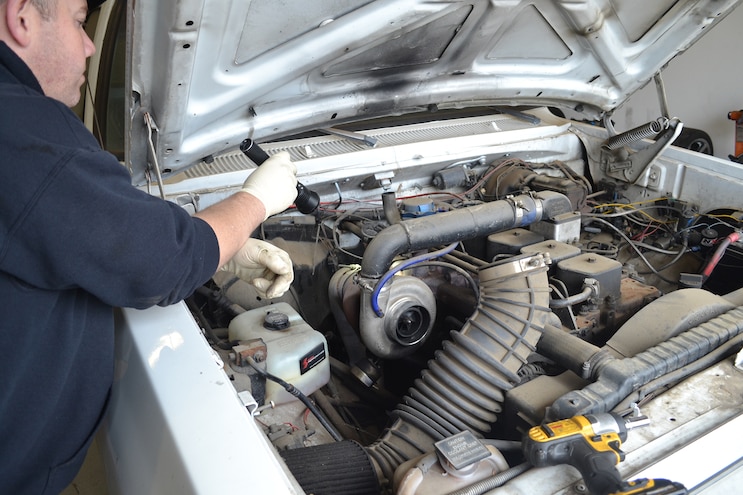 View Photo Gallery | 14 Photos
Photo 2/14   |   002 DSLP 160600 RTECH Intake Removal
Upon initial inspection, it appears as though the turbo or even the transmission heat exchanger must be removed to access the freeze plugs. The air intake is actually the only thing that must be moved out of the way. We suspect the job is a bit more difficult with later common-rail engines. 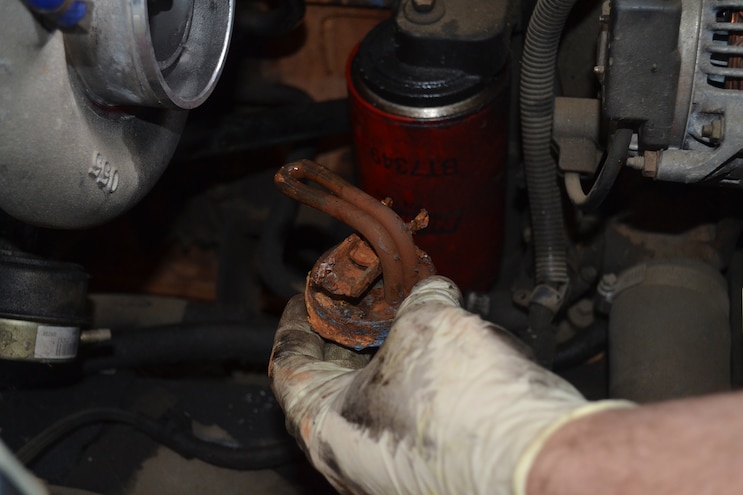 View Photo Gallery | 14 Photos
Photo 3/14   |   003 DSLP 160600 RTECH Block Heater
Since all the water had already leaked out of our truck’s engine (thanks to a hole in one of its corroded freeze plugs), the factory block heater is removed first. And, as you see in this photo, our truck’s original unit is in bad shape. The engine has had water in it for a few years. View Photo Gallery | 14 Photos
Photo 4/14   |   004 DSLP 160600 RTECH Pry Bar
Removing the rest of the freeze plugs is simple and only requires using a long pry bar and a smack with a hammer. The pry bar is set on the very edge of the plug, so it can be knocked sideways in the block without punching it in completely. 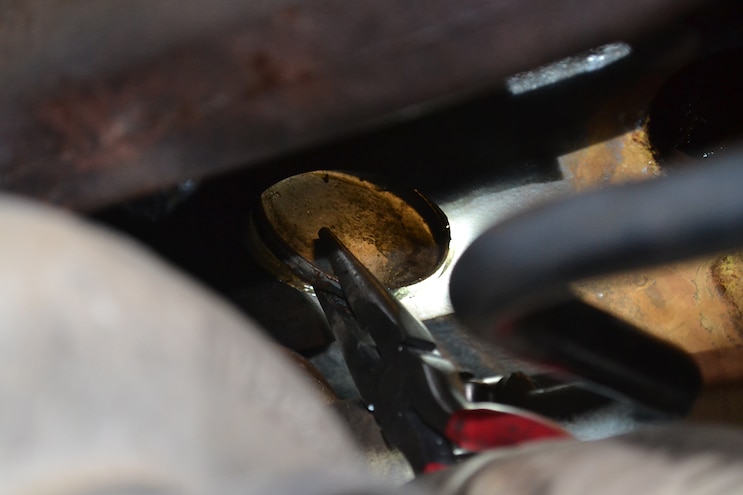 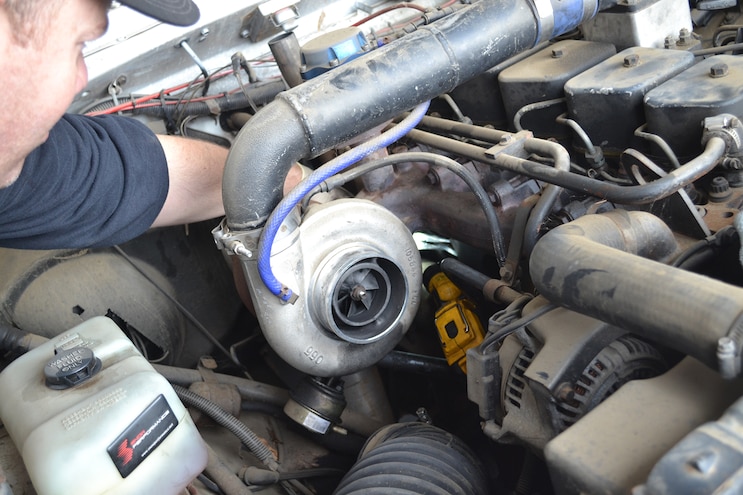 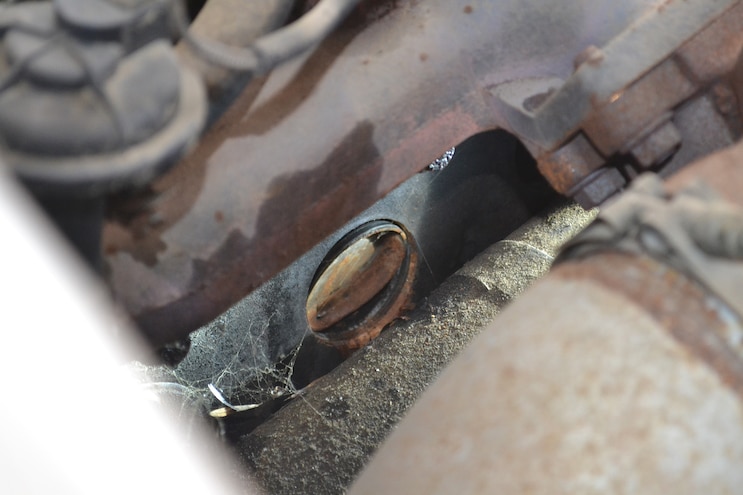 View Photo Gallery | 14 Photos
Photo 7/14   |   007 DSLP 160600 RTECH Freeze Plug Askew
If a freeze plug ends up inside the block, not to worry, it can be fished out. We got lucky and managed to tap most of them until they were just slightly cockeyed, and then we could remove them with a pair of needle-nose pliers. 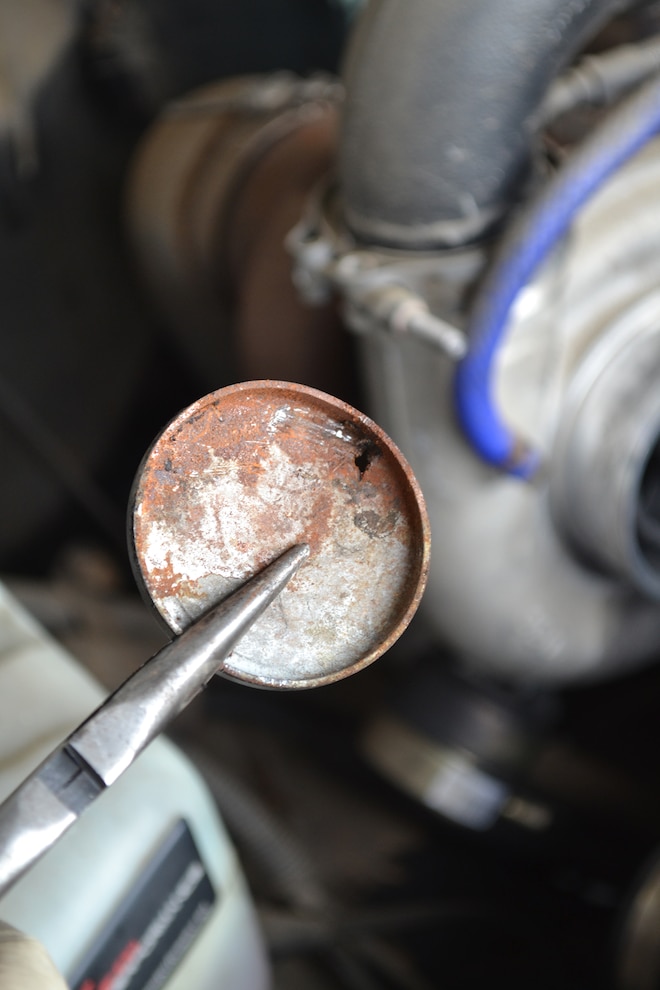 View Photo Gallery | 14 Photos
Photo 8/14   |   008 DSLP 160600 RTECH Freeze Plug Hole
In addition to coolant pressure being an issue, we see that our 12-valve Cummins’ freeze plugs are so corroded that one actually has a small pinhole in it. The lesson here? Keep coolant in the engine when you're not using the truck at the dragstrip or on a sled pull track (where only water is permitted for cooling). By using coolant everywhere else, you’ll prevent this kind of corrosion. 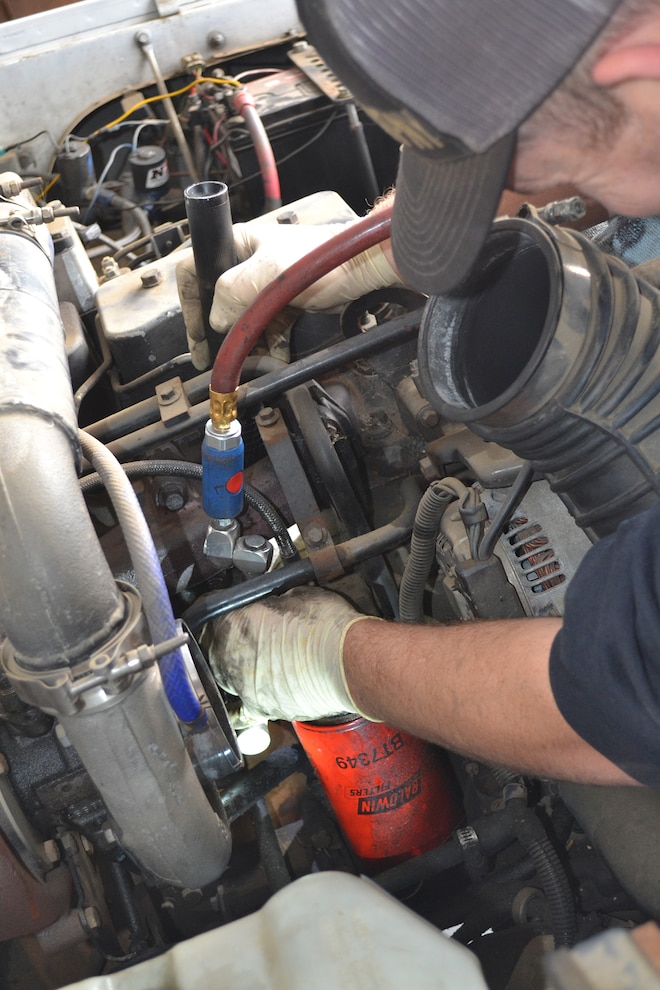 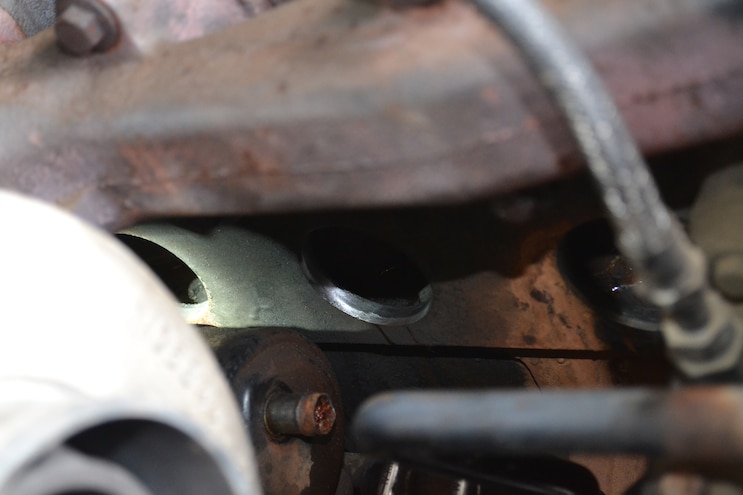 View Photo Gallery | 14 Photos
Photo 10/14   |   010 DSLP 160600 RTECH Cleaned Block
Thankfully, the rust that graces the side of our block and freeze-plug holes is only on the surface, and it cleans up easily. There’s no sign of pitting or damage, which is good, because our new freeze plugs use O-rings to seal. 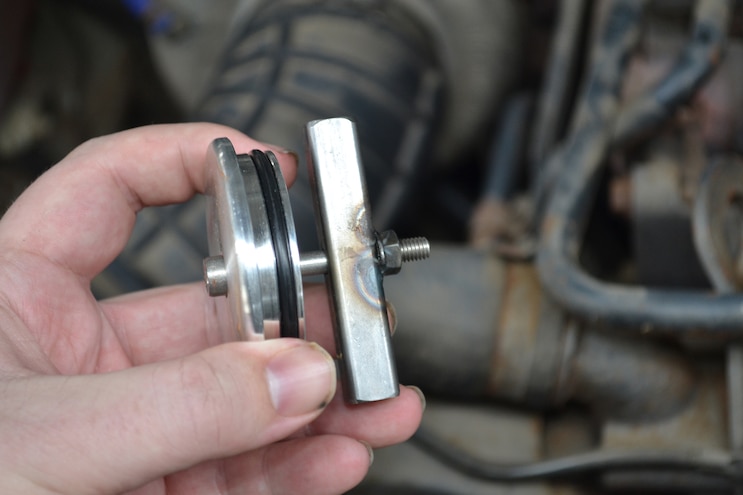 View Photo Gallery | 14 Photos
Photo 11/14   |   011 DSLP 160600 RTECH New Keating Plugs
We’re using four new block plugs from Keating Machine for this application. The plugs physically cannot be blown out thanks to their unique backing bars that snug the face of each plug against the block, where they seal with O-rings. 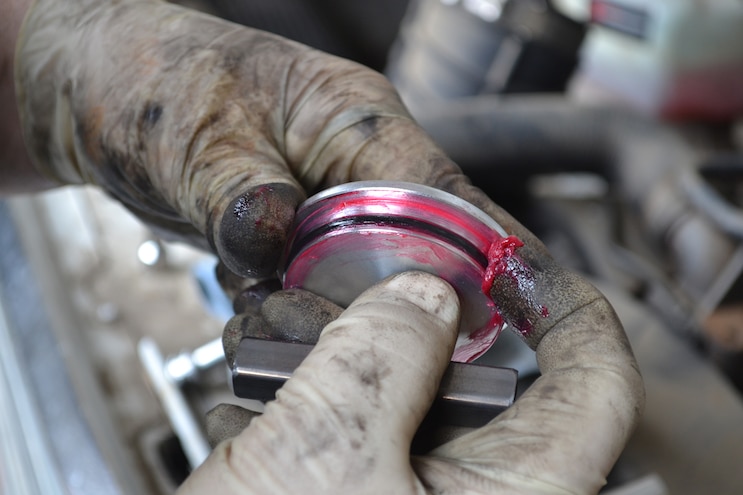 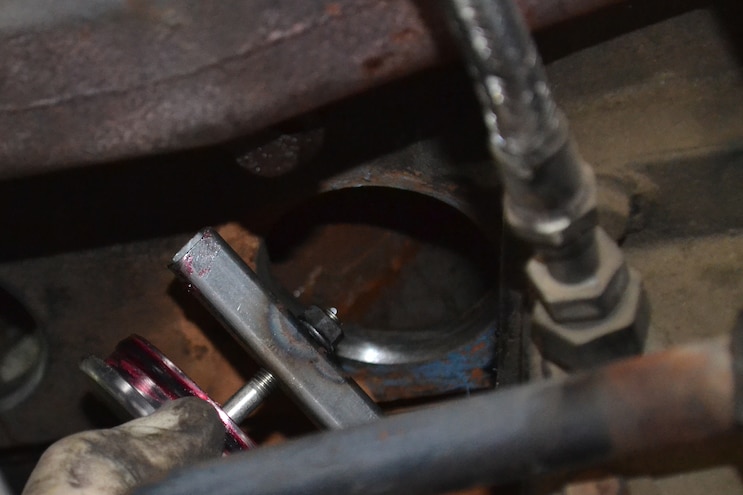 View Photo Gallery | 14 Photos
Photo 13/14   |   013 DSLP 160600 RTECH Keating Plug Installation
Our new, machined aluminum plugs are installed by leaving the backing bars loose and then turning them sideways in order to pass the bars through the plug bores. Once the backing bars are inside the block, each plug is tightened down with an Allen screw. 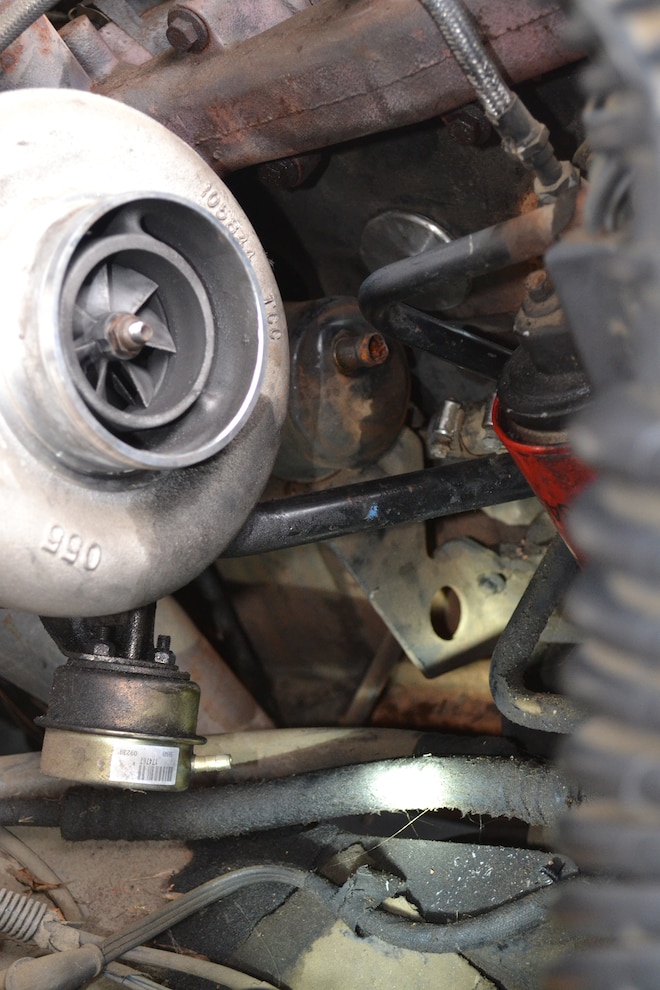 View Photo Gallery | 14 Photos
Photo 14/14   |   014 DSLP 160600 RTECH Finished Freeze Plug Install
Although we’ll have to be careful to mix in antifreeze during winter, we now feel a lot better knowing a blown freeze plug won’t suddenly cause the truck to lose all its coolant or send it into the wall at the dragstrip.
The Rear Freeze Plug
Cummins 5.9L and 6.7L engines also have a freeze plug at the back of the block, which can blow out and cause a water leak. Keating Machine makes a bolt-on plug for the back that can't be dislodged. First-generation Dodge Ram owners (’89-to-’93) have it rough, as replacing the rear plug requires dropping the transmission or cutting a hole in the firewall. Later (’94-and-up) Ram owners should just be able to squeeze the plug between the engine and the firewall without any additional disassembly.