Removing Carbon and Dirt from Injector Seats With New, Specialized Brushes from IPA 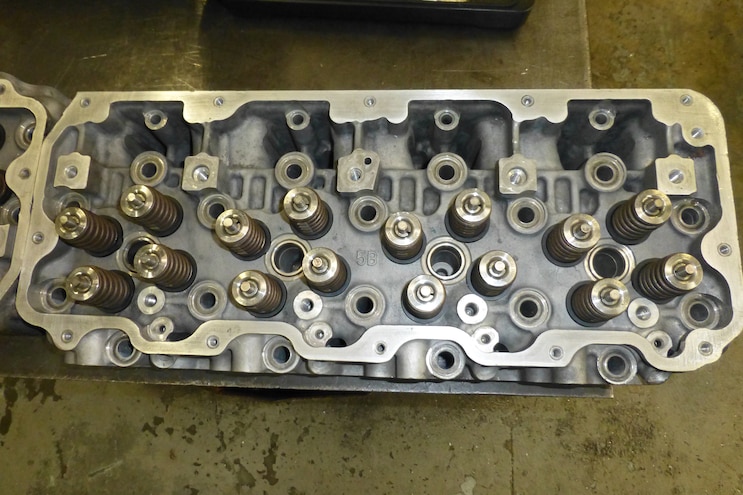 We start this report with a question for do-it-yourself diesel pickup owners who perform all of their truck’s engine upkeep and repair, especially those of you with oil-burners that have more than 100,000 miles of use: Have you had to replace the fuel injectors yet?
Of course, we’re not wishing this type of project on you or your rig. However, when a failure or problem does warrant injector replacement, is “pull one, install another” your basic procedure for handling the job? When removing fuel injectors from a high-mileage engine, do you consider the possibility of built-up debris such as rust and carbon being lodged in the injector seats? We certainly hope you do, because that residue can prevent a new injector from sealing properly, and thus cause a leak. So, whenever one or a full set of injectors is being replaced, cleaning the injector seats is a good idea.
Injector seats are used to hold and seal fuel injectors in the cylinder head. A seat is made up of different sections that correspond to the injector, the largest part being the main bore, which is where the body of the injector sits.
Sleeves (typically steel or aluminum) that seal the injectors’ O-rings are pressed or machined into the heads. For example, Duramax engines have aluminum heads with press-fit steel sleeves. There’s a flat area at the bottom of each injector seat’s main bore that seals washers for the injector nozzles against the seats. In the middle, located between the valves, are the inner-seat holes that position and secure the nozzles over the cylinders.
Each part of the injector seat should be cleaned whenever an injector is removed or replaced. There are a number of things that can happen if debris is not removed from the seat. One of the problems is that it can cause the injector to not fit or seal correctly when it is installed. If this happens and the seats are located under the valve cover, it’s possible that engine oil could seep around the injector and into the cylinder and burn. Also, if the injector is not covered and is open to the elements, a bad seal can allow water and dirt to migrate into the cylinder, which will eventually lead to problems. An improper seal may also allow gases, fuel, and compression to pass around the injector, creating a loss of power.
Removing dirt and debris from injector seats is exactly what Innovative Products of America’s Professional Diesel Injector-Seat Cleaning kit does. The brush set includes everything necessary for cleaning an injector seat and bore on most light-, medium-, and heavy-duty diesel engines. The kit features three types of brushes: Helix, Two-Stage, and Bore—which all come in variety of sizes (so they can be used for different applications).
A driver handle with a quick-lock coupler and two extensions is also included, as is an assortment of swabs for cleaning and polishing the bores.
Each brush type is designed for cleaning specific areas of an injector seat. The Helix brush is used for deep-seat cleaning, while the seat and inner-seat hole are serviced with the Two-Stage brush. The different bore brushes can be used individually or in any combination needed to perform a proper cleaning.
The following photos chronicle Brent Ranney of L&R Engines in Santa Fe Springs, California, as he uses the IPA Diesel Injector-Seat Cleaning kit’s brushes and swabs to work on a set of Duramax heads. 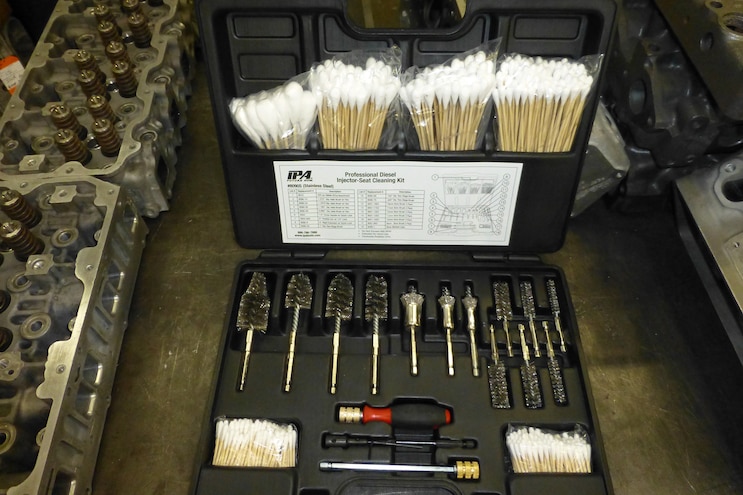 View Photo Gallery | 21 Photos
Photo 2/21   |   001 IPA Injector Seat Cleaning Kit
Innovative Parts of America’s Professional Diesel Injector-Seat Cleaning kit comes with everything needed to properly clean the seats and bores. The brushes and swabs vary in size and can be used in multiple applications.
Prior to staring our project, the Duramax cylinder head we’re working with was cleaned in a hot tank at L&R Engines. While the bath does a good job of removing oil and dirt from the head, detailed areas such as the injector seats require more concentrated cleaning.
L&R’s Brent Ranney starts the procedure by inserting the Two-Stage brush into the injector bore and turning its handle clockwise to clean both the seat and the inner-seat hole. 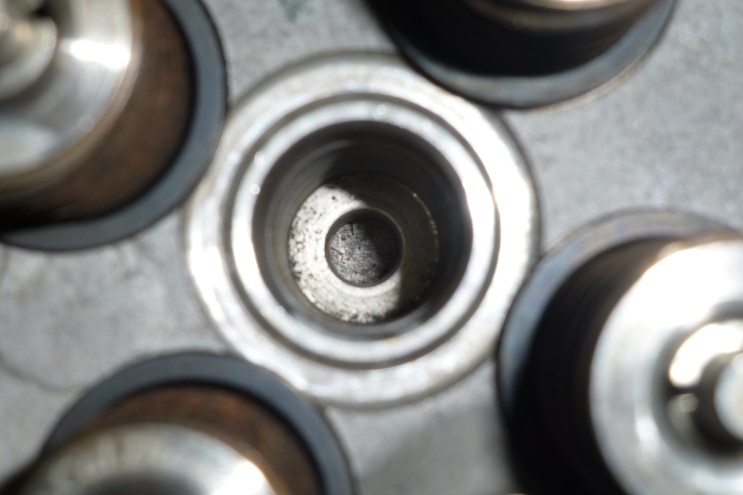 View Photo Gallery | 21 Photos
Photo 8/21   |   007 Injector Seat Bottom Dirt
After using the Two-Stage brush, the amount of debris remaining on the injector seat suggests the brush does a better job of cleaning the inner-seat hole than it does the actual seat.
Here, Brent uses the Helix brush (also turning it clockwise) to clean the injector-seat bore.
The Helix brush makes a noticeable before/after difference in the condition of the bore. The tarnish and debris are gone. 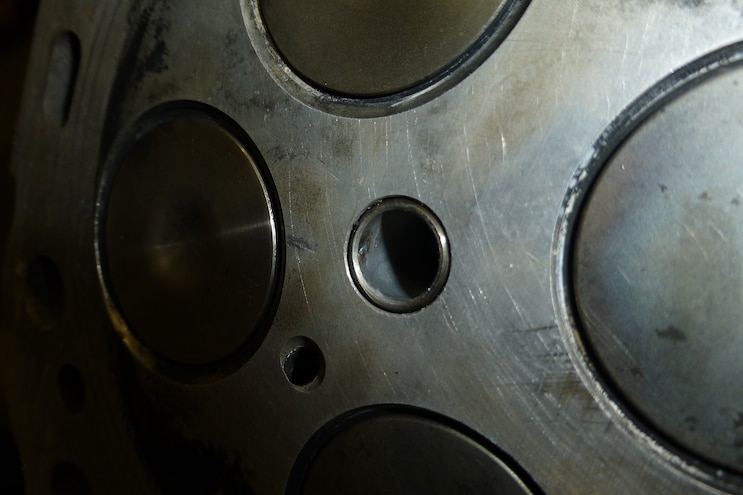 View Photo Gallery | 21 Photos
Photo 13/21   |   012 Bottom Inner Seal Hole Debris
Flipping the head on its side and inspecting the inner-seat hole, we see that some carbon is still visible—even after cleaning with the Two-Stage brush. 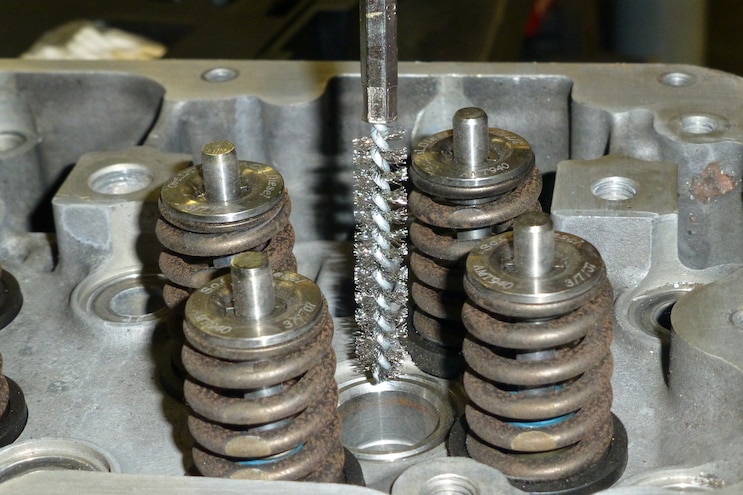 View Photo Gallery | 21 Photos
Photo 14/21   |   013 Bore Brush
The kit actually includes a Bore brush that is the correct size for the inner-seat hole of a Duramax head. 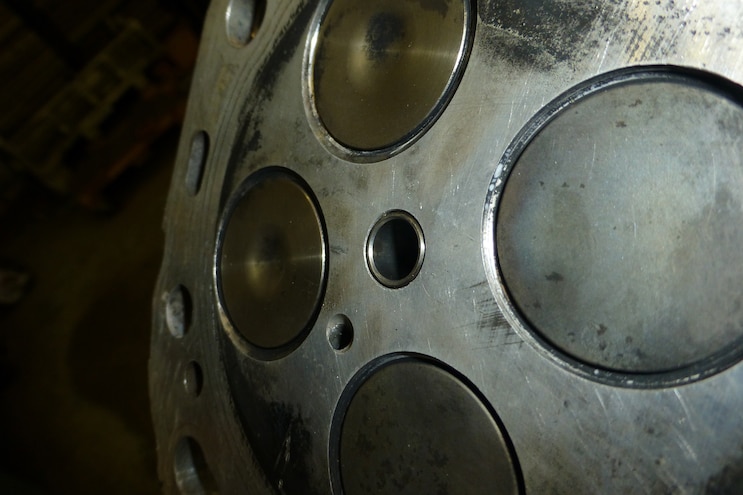 View Photo Gallery | 21 Photos
Photo 15/21   |   014 Bottom Inner Seal Hole After Bore Brush
Here is another look at the inner-seat hole after Brent cleans it with the correct-sized Bore brush. There is definitely a noticeable difference.
After using the brushes, Brent wipes the bore and seat areas clean with swabs that are included in the kit. If a seat is really dirty, it may take more than one swab to get it completely clean. Make sure to clean the bore and the inner-seat hole completely. 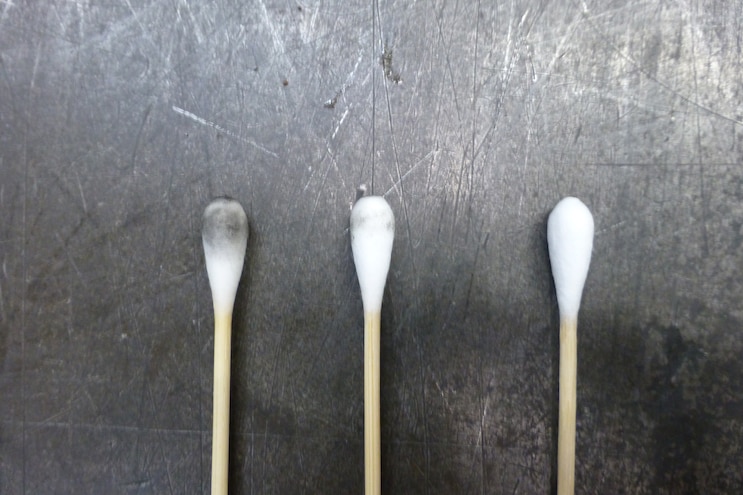 View Photo Gallery | 21 Photos
Photo 19/21   |   018 Swab Comparison
This is what the swabs look like before and after servicing an injector seat. Despite the fact that our Duramax cylinder head’s injector seats were cleaned in a hot tank, a lot of dirt and debris remained, as evidenced by the swab on the left, which was used to clean one seat for this project. The middle swab was used to clean the seat a second time to ensure it and the bore were completely free of residue. The swab on the right is a new one that we’re using as a comparison.