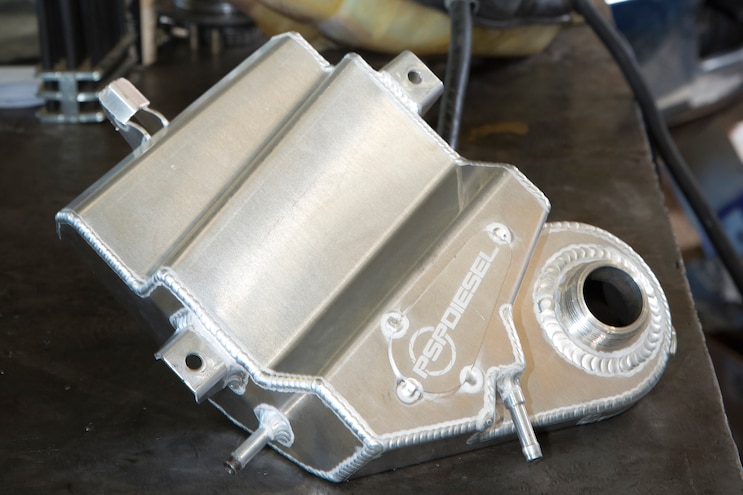 It’s well-documented fact that 6.0L Ford Power Stroke engines can experience a fair share of mechanical problems. But, after the head gaskets and studs are upgraded, and a few other internal upgrades are done, the good-old “six-oh” actually can be counted on to be a strong performer with a long life.
Robert Sego relies on his ’06 F-350, and is leaving nothing to chance by having Dunks Performance in Springfield, Oregon, rebuild his stock 6.0L after it succumbed to a blown head gasket. While Dunks corrects the internal issues, they’ll also address an external one: the coolant reservoir.
The stock coolant reservoir is made of plastic, which over the years succumbs to the effects of heat from the coolant circulating through it under pressure and from the ambient heat under the hood.
Splitting at the seam between the upper and lower sections of the plastic tank is the typical failure. When the coolant reservoir breaks, the engine immediately loses its capacity to cool properly.
PSP’s Fix
An easy cure for correcting the coolant- reservoir issue is as simple as replacing the container with a polished- aluminum version from PSP Diesel of Houston, Texas. PSP teamed up with Moroso to develop and design the split-resistant, bolt-in replacement that adds a sweet custom touch to the 6.0L Super Duty engine bay.
The new tank is a piece of art, too. It’s TIG-welded-and-polished, and it includes fittings for attaching the coolant hoses that run to the intake manifold, radiator overflow return, and lower radiator “Y” hose. It also utilizes the stock 16-psi cap to maintain the integrity of the stock cooling system.
Swapping the original reservoir for the PSP Diesel aluminum version can be done in less than 15 minutes, using an 8mm socket wrench and pliers.
An added touch on PSP’s coolant reservoir ($390 ) is a clear sight glass that allows you to easily monitor the coolant level at a glance. The swindow also facilitates inspecting coolant for any contaminants without having to remove the pressure cap, which is necessary with the stock tank.
PSP’s replacement eliminates any worry about the factory coolant tank swelling and coming apart at the seams. The aluminum also helps dissipate heat, giving the cooling system an additional bump in performance. 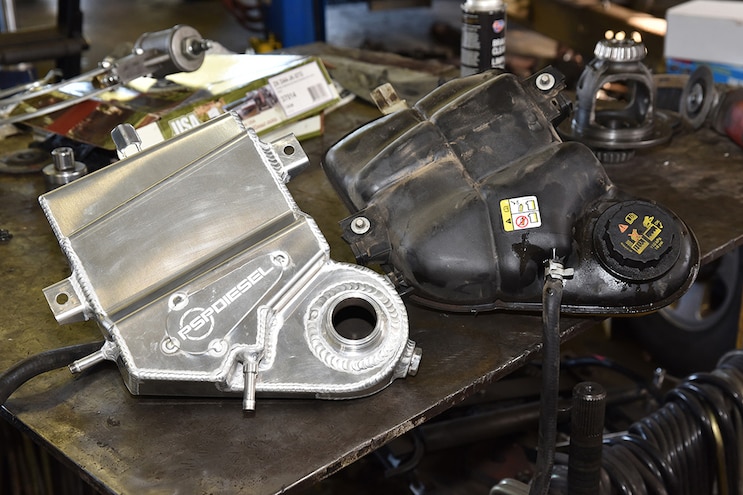 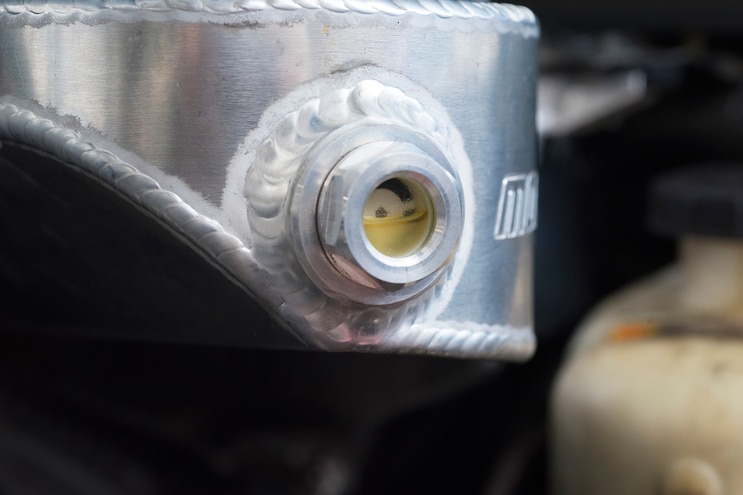 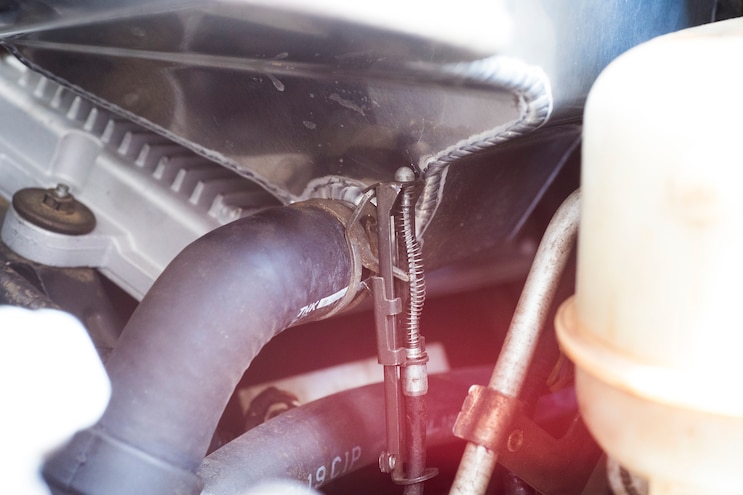 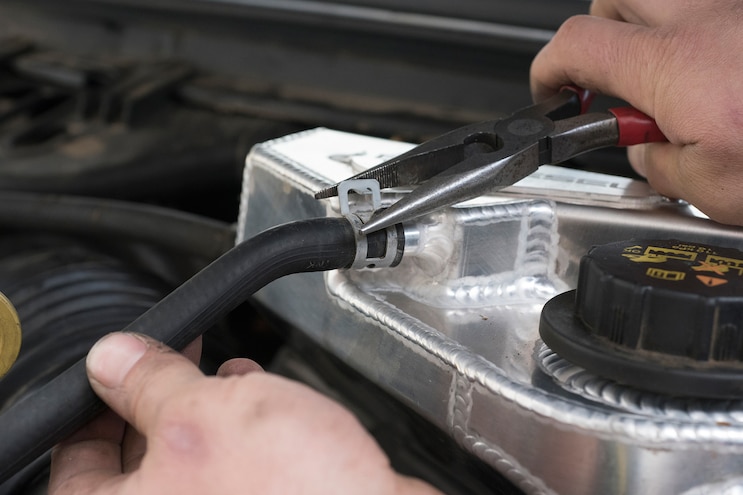 View Photo Gallery | 9 Photos
Photo 5/9   |   005 Hose Clamp Reservoir
Three hoses connect to the coolant reservoir: One is from the intake manifold, another goes the lower radiator “Y” connector, and the third leads to the radiator overflow, which we are installing in this report. 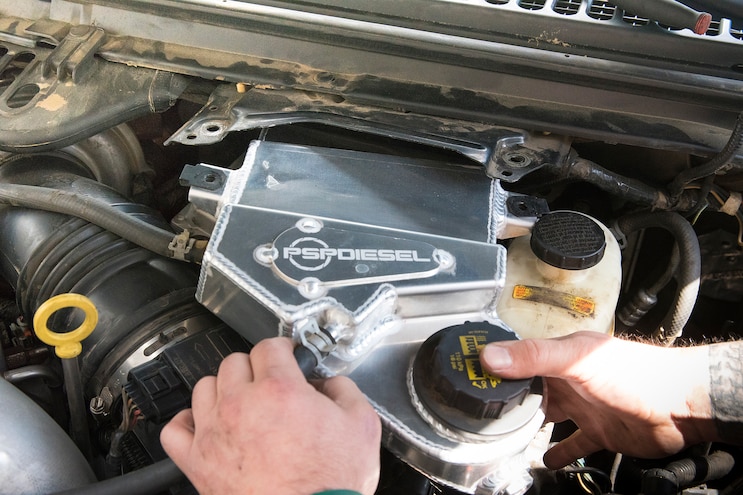 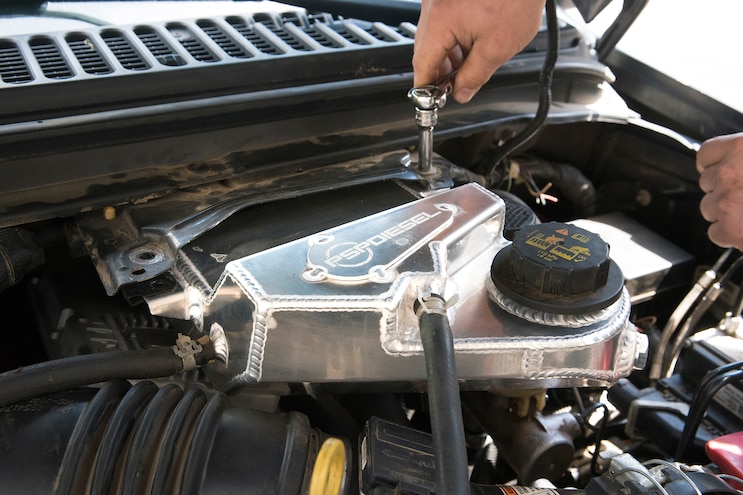 View Photo Gallery | 9 Photos
Photo 7/9   |   007 Bolting In Coolant Reservoir
A ratchet with an 8mm socket makes quick work of tightening the bolts that hold the PSP reservoir in place. 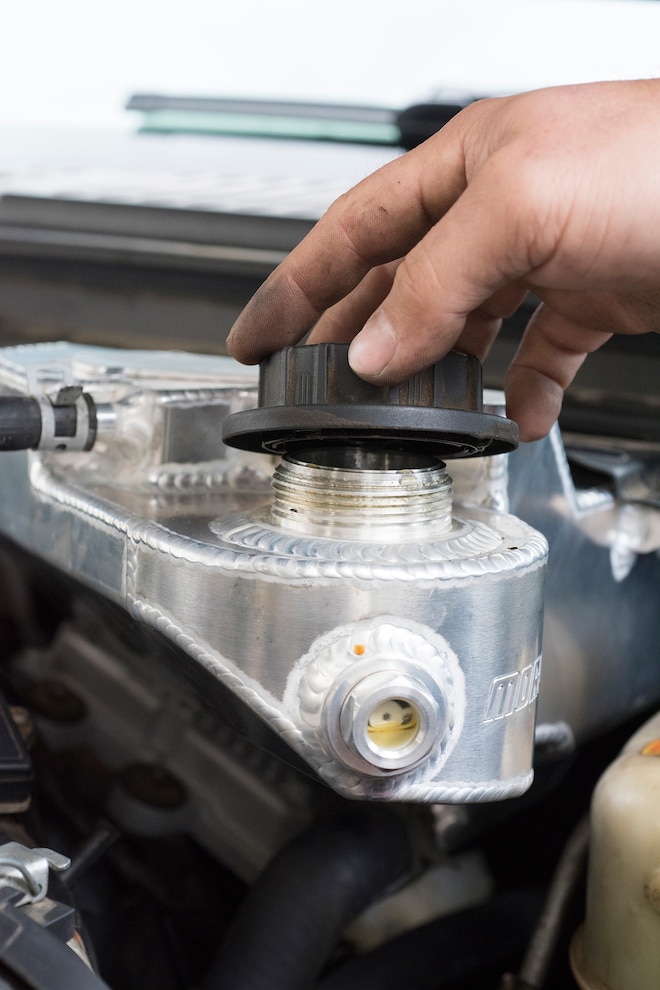 View Photo Gallery | 9 Photos
Photo 8/9   |   008 Reservoir Pressure Cap
We’re reusing the stock pressure cap, which has a 16-psi maximum-pressure rating. Using a cap with a higher threshold can cause the coolant hoses to burst should there be a sudden surge in pressure. 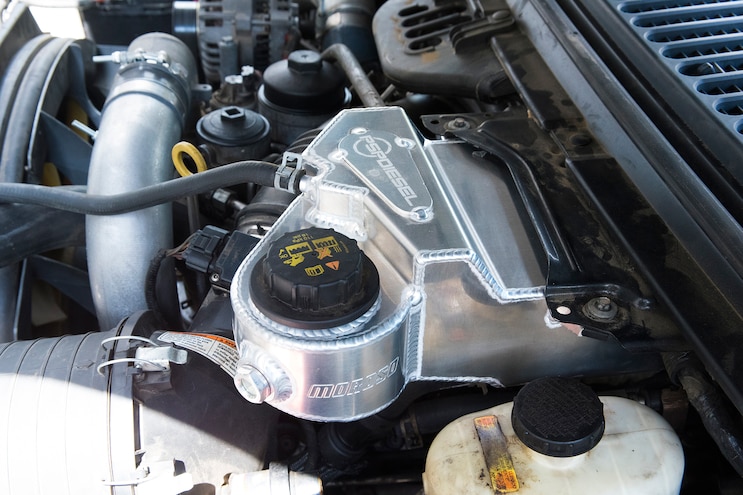