This Unique Turbodiesel Moves Trains and Ships With 29,178 lb-ft of Two-Stroke Torque 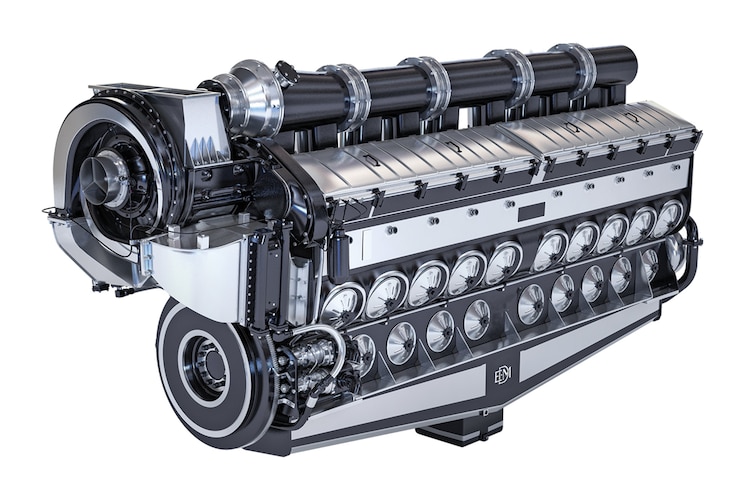 Back in the late 1800s, railroads unified the U.S. by making it possible for people to travel from coast to coast in relative comfort and for freight to be hauled faster than by ship. The first trains were drawn by steam engines that had limited power. But, as the need to haul more freight increased, locomotive manufacturers started building trains with more efficient and powerful drive systems, highlighted by such large-displacement diesel engines as Electro-Motive Diesel’s E 23. The core design of the EMD E 23 dates back to 1935 and the 567 series, which was first used in marine applications such as the U.S. Navy’s LSTs (Tank Landing Ships). By the 1950s, the engines were being used in locomotives. Through the years, each new model (645, 710, and E 23) has undergone developments and innovations that improve on that original design. This has lead to more than 78,000 units being delivered worldwide since 1935.
The modern E 23 is an emissions-friendly series of medium-speed, two-stroke diesel engines that are used in the locomotive, marine, drilling, and power-generation markets. To meet the needs of these different applications, it is offered in V-8, V-12, V-16, and V-20 configurations with different accessory packages. The largest offering, the V-20, displaces 232.7L and provides 5,000 hp with 29,178 lb-ft of torque. EMD’s use of a two-cycle system provides advantages over four-cycle. The once-per-revolution firing of each cylinder and the specially designed turbocharger guarantee large amounts of available power and responsiveness are provided throughout the engine’s rpm range. This also allows recovery from applied loads to be faster than equivalent engines.
The turbocharger has the ability to provide continuous pressurized air from 200 to 900 rpm. The unique charge-and-scavenging air management system works via a hybrid-engine geartrain and clutch-driven compressor that can spool the turbine whenever there is insufficient exhaust flow. Then, as the flow increases and gases take over, the clutch disengages. This constant high air density provides a reduction in ignition delay and NOx emissions.
The turbo’s continuous airflow is made possible by a unique “uniflow” crankcase design that has the air intake system integrated. The individual cylinder heads feature intake ports in lieu of valves, which allow air to flow to the pistons through passages in the block. Superior exhaust flow is accomplished with four exhaust valves per cylinder.
The E 23’s electronic unit injector (EUI) system plays a major role in the engine meeting the U.S. Environmental Protection Agency’s Tier 4F, and International Maritime Organization’s (IMO) III Code emissions standards. Because the EUI controls such key events as fueling at the start of combustion, cylinder temperatures and hot spots (on the injector tips) are lowered, thus NOx and particulate-matter emissions are reduced.
A distinctive feature of this two-stroke powerplant is its fabricated crankcase. Unlike most engines that use a cast-iron block, the E 23 is constructed with steel forgings and flat, formed and rolled structural-steel pieces that are all welded together. This 45-degree V assembly has great durability and provides advantages in installation and repair whenever it’s necessary.
SPECIFICATIONS
Engine: EMD E 23
Displacement: 232.7L (14,200ci)
Engine Layout: V-20, 45 degree
Valvetrain: SOHC
Bore x Stroke: 9.06 x 11.0 inches (230.19 x 279.4mm)
Compression Ratio: 18.0:1
Head material: Iron
Block material: Carbon steel
Piston material: Tin-plated cast gray iron
Power: 5,000 hp at 900 rpm
Torque: 29,178 lb-ft at 900 rpm
Induction: Single turbocharger
Exhaust: Cast iron
Intercooler: Air-to-water
Cooling System: Liquid cooled
Fuel System: Electronic unit injectors, direct injection
Lubrication System: Wet sump
Dry Weight: 43,091 lbs
Length: 29 feet, 7 inches
Width: 5 feet, 8 inches
Height: 10 feet, 2 inches