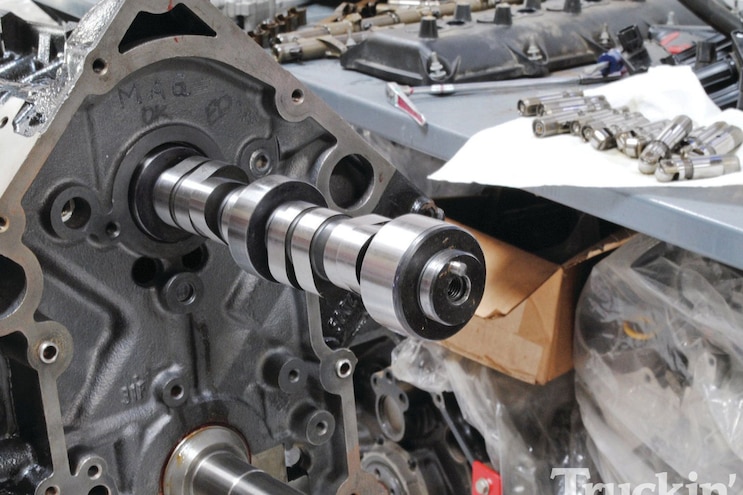 Everybody kind of knows what it is and has a picture in their mind of what a camshaft looks like, but maybe not a full understanding of what it really does or the technological advances that significantly enhance cam operation.
cam – noun | \’kam\ :
“a rotating or sliding piece (as an eccentric wheel or a cylinder with an irregular shape) in a mechanical linkage used especially in transforming rotary motion into linear motion or vice versa”.
In other words, a cam is a cast metal shaft with eccentrics/lobes (somewhat oval objects), which transform the rotation of the shaft into a useful up and down motion. In the automotive realm, the lobes open and close intake and exhaust valves.
Four-stroke gas and diesel engines use one or more camshafts. Traditional domestic V-6 and V-8 configurations use a single cam located in the center of the engine block with lobes deemed for both intake and exhaust valves. Here, the lobes push up on valve lifters, then pushrods, and then rocker arms. The rockers pivot, and the other ends push downward and open the valves. Current examples of this arrangement include the General Motors Gen V small-block V-8 and the Mopar Hemi V-8.
Single Over Head Cams (SOHC) eliminate pushrods and lifters by applying the lobes directly to the rockers or exclude the rockers and push down almost directly on each valve.
Dual Over Head Cam (DOHC) configurations use individual intake and exhaust camshafts. Once the domain of high-performance and luxury cars, DOHC engines are now very common, even in the light truck and SUV market.
Three major specifications of a camshaft are lift, duration, and timing. Lift is basically the difference between the highest and lowest point of a cam lobe, which translates into the distance a valve opens. Duration is determined by the width of the lobe, and controls the amount of time (or number of degrees) the valve stays open. Cam timing relates to when a lobe opens and closes each valve in relation to piston travel or the number of degrees before or after top dead center the event occurs. 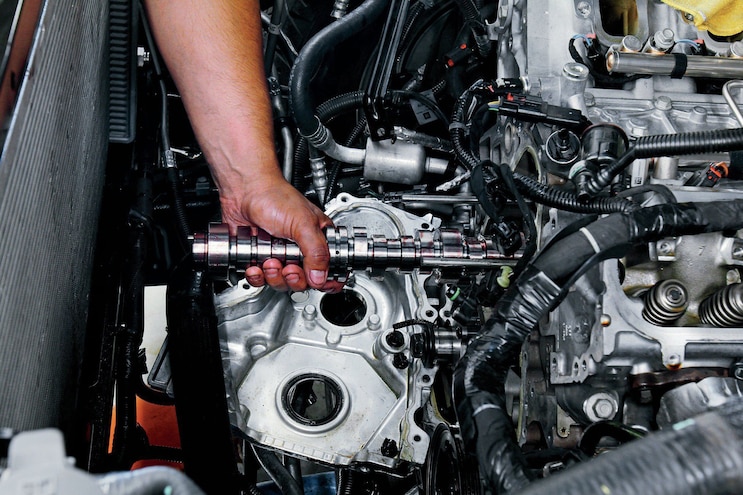 View Photo Gallery | 6 Photos
Photo 2/6   |   Shop Creative Camshaft Insert
When talking camshafts, high performance is often part of the conversation and for good reason. Lift, duration, and timing have drastic effects on engine performance. Higher lift and longer duration opens valves further and for longer periods of time, allowing more air and fuel into (and exhaust out of) the combustion chamber. The adjustment of cam timing (when valves open and close) can focus an engine’s power at higher or lower engine speed ranges.
On mass-produced passenger cars and trucks, engineers have always looked for a happy medium; lift, duration, and timing to produce high fuel economy ratings, while keeping driver’s satisfied with their engine’s performance. This is where technology intersects with standard camshaft design and operation.

Camshafts are all crankshaft-driven by means of a timing chain, belt, or gear. Fixed cam timing is controlled by the position of the sprockets or gears at the cam and crank. Most typical OE engine cam timing is non-adjustable, the sprockets are installed at the front of the cam and crank at fixed positions, and timing is manufactured into the sprocket’s design.
High performance aftermarket cam applications often use adjustable cam sprockets. These sprockets are equipped with slots where they bolt to the cam allowing adjustment clockwise or counter clockwise (retard or advance timing). The term “dial in a cam” refers to the procedure for setting cam timing, often to adjust for desired performance needs.
Variable valve timing (VVT) employs the “dialing in” of a cam, dynamically. Most systems are electrohydraulic, meaning a computer-driven solenoid is electronically controlled to route hydraulic oil pressure to a component. This takes us back to that adjustable cam sprocket, only no more slots. Now we use a hydraulic actuator (or phaser) in conjunction with the sprocket that rotates accordingly in relation to the camshaft (advance/retard).
Valve timing actuators can be used on intake, exhaust, or both intake and exhaust camshafts. Basically, advancing cam timing will open and close valves earlier in relation to piston travel. This enhances lower rpm efficiency but reduces high-end output. Retarding cam timing does the opposite. So the engine’s powertrain control module evaluates multiple inputs from sensors (crank, cam, temperature, mass air flow, throttle position, etc.) and varies cam timing accordingly to optimize power and fuel efficiency under various driving conditions.

VVT and variable valve lift (VVL) can overlap. Straight variable valve timing systems have no effect on lift or duration. Meanwhile, variable valve lift setups have a margin of control on lift, duration, and timing.
Most, but not all, systems are electrohydraulic. The PCM sends a command to a solenoid that directs a precise amount of hydraulic pressure to control a hydraulic actuator.
There are two general methods of VVL most commonly used: discrete and continuous.

Discrete VVL is a two-mode system utilizing different camshaft profiles; cam lobes shaped with lower lift/duration for fuel efficient low-rpm driving, and higher lift, longer duration lobes for high-performance, hard-on-the-throttle situations.
One example is Honda’s Variable Valve Timing and Lift Electronic Control (VTEC), which is one of the earliest successful systems that utilize a camshaft with two lobes per valve, with the use of a multiple rocker arm setup.
Under low-rpm conditions specific rockers ride on the lower lift/shorter duration cam lobes to enhance fuel efficiency. But when the PCM analyzes inputs determining higher engine speed and load conditions, it sends an “on” command to a solenoid, which directs oil pressure to the rocker arm shaft.
Hydraulically driven pins are forced out and lock two rocker arms together. The two rockers now ride in unison on the higher lift cam lobes. This provides additional power during performance demands.
In each mode different cam lobes are opening and closing valves, the timing of each lobe is determined by its position on the shaft. Therefore different valve timing specs for each lobe is designed into the manufacture of the cam—more advanced for the low-rpm lobes, retarded for high speed. 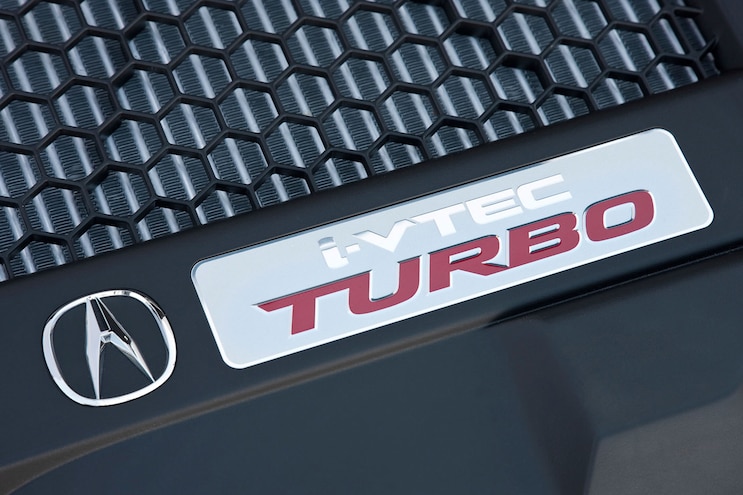 “Continuously variable” may strike a chord. Continuously variable valve lift systems use similar physics to a continuously variable transmission (CVT). Instead of 1-2-3-4 gearshifts, a CVT changes gear ratios in a more seamless, smooth transition, resulting in higher fuel efficiency.
Continuous variable valve lift systems are no longer two-stage. Instead they vary cam lift in a more precise format, which advances control.
BMW was a groundbreaker with the advent of the Valvetronic system, and other manufacturers have followed suit, such as Nissan, with its Variable Valve Event and Lift (VVEL) system.
The setup is complex. In short; a rocker arm with two links, a driveshaft with an eccentric cam, and a control shaft adjusted by an electric motor delivers continuous control of intake valve opening without the use of standard cam lobes.
VVEL and Nissan’s Continuous Variable Valve Timing Control (CVTC) work together and maintain continuous control of both valve lift and timing.
Manufacturer/Name
BMW – Valvetronic
Chrysler -- Multiair
Honda -- Advanced VTEC
Nissan -- Variable Valve Event and Lift (VVEL)
Toyota – Valvematic
Some continuous VVL systems are taking intake valve lift to such an extreme they can eliminate the need for a throttle body to control incoming air to the combustion chamber.
The ultimate in valve control is the elimination of cams, chains, belts, and gears, and the use of actuators or solenoids on top of each valve. This would permit unequaled control of lift, duration, and timing and extinguish a good percentage of efficiency-depriving friction. But due to cost and possible bugs preventing long-term durability, this type of system is not yet in widespread production.
Technology to improve fuel economy, emissions, and engine performance has come a long way, both electronically and mechanically. It’s a blast to wonder what breakthroughs might make it to the assembly line in the next 10 years.