History of the Hemi V-8 Engine

From Then to Now 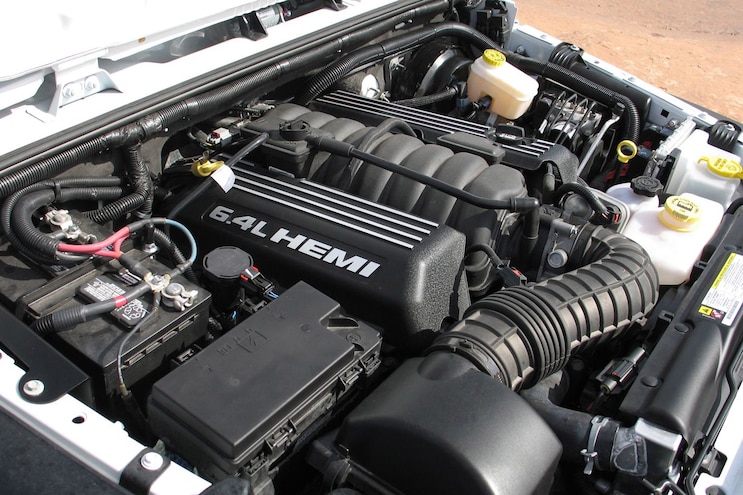 Most everybody’s seen the “HEMI” logo on recent Chrysler-produced cars and trucks. Many muscle-car fans picture a 426ci big-block whenever the subject comes up in conversation. But still there are a few history buffs familiar with the origination of Chrysler’s “hemispherical combustion chamber” coming out of WWII, or even back to the early 1900s where the design actually began. 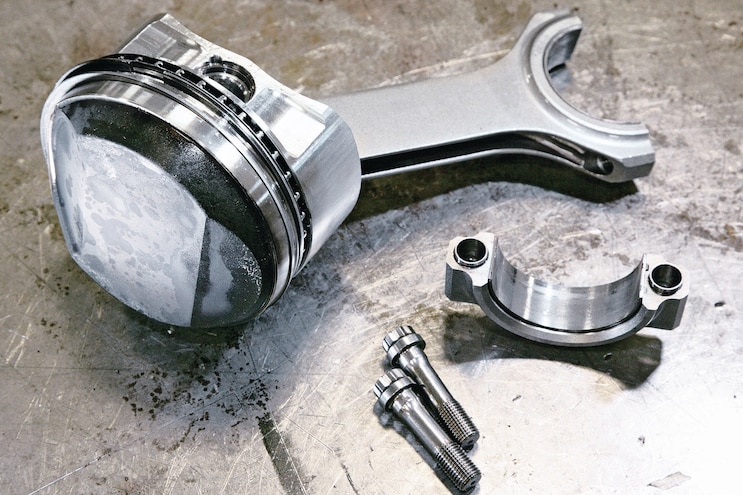 View Photo Gallery | 9 Photos
Photo 2/9   |   History Hemi V8 Engine Piston
The basis of the hemi design is fairly simple. The shape of the cylinder head’s combustion chamber is approximately half of a sphere—picture a grapefruit cut down the middle and hollowed out. This allows the spark plug to be placed top-center, which shortens the burn distance of the air/fuel mixture. At the same time, on overhead-valve engines, a large intake and exhaust valve is fitted on either side of the plug to enhance intake air and exhaust flow in and out of the combustion chamber. Due to the hemisphere shape, flattop pistons could not produce sufficient compression, so domed pistons were used to make up the difference.
Even at its most basic stages of development, the hemispherical configuration proved to augment the combustion process and increase engine power. 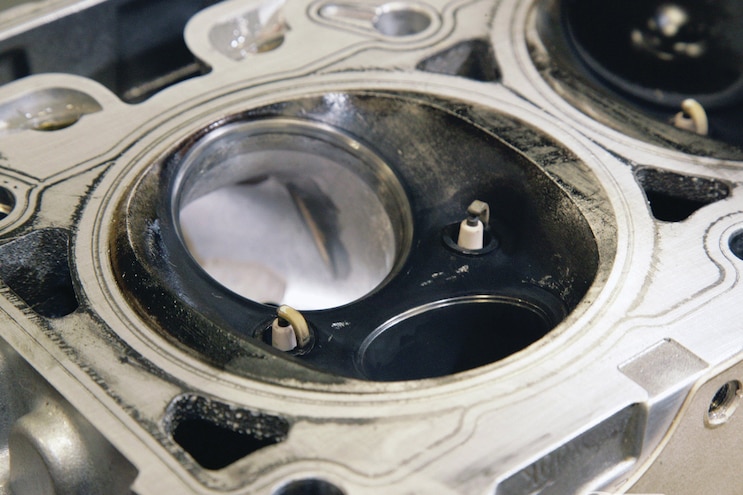 The hemi design actually came into existence with some of the earliest automotive internal combustion engines. Belgian carmaker Pipe produced a four-cylinder hemi in 1905, and the Fiat 130 HP Grand Prix race car brought it to the track by 1907. Several manufacturers followed suit with the more powerful combustion-chamber technology through the coming decade.

Overall hemi-style, combustion-chamber production dropped off due to cost issues subsequent to the power rush of the originals, but Chrysler prompted a rebirth following World War II.
Chrysler engineers committed themselves to the testing and development of Hemi engines throughout the war for military and aeronautic use. There were two experimental models completed. One was the V-12 AV-1790-5B engine used in the M47 Patton tank. The other was the massive XIV-2220 (a 2,220ci V-16) to power a P-47 Republic Thunderbolt fighter aircraft. The XIV-2220 was rated at 2,500 hp and surpassed 500 mph on test flights. Although the project was considered a success, the end of the war and oncoming of jet aircraft technology eliminated demand, and the V-16 never made it into production.

From a baby-boomer perspective, the 426 is the definition of a Hemi. After a stall in production following the first generation, Chrysler produced what some called the “Elephant Engine.” This was the first hemispherical head design engine to wear the trademark HEMI name. 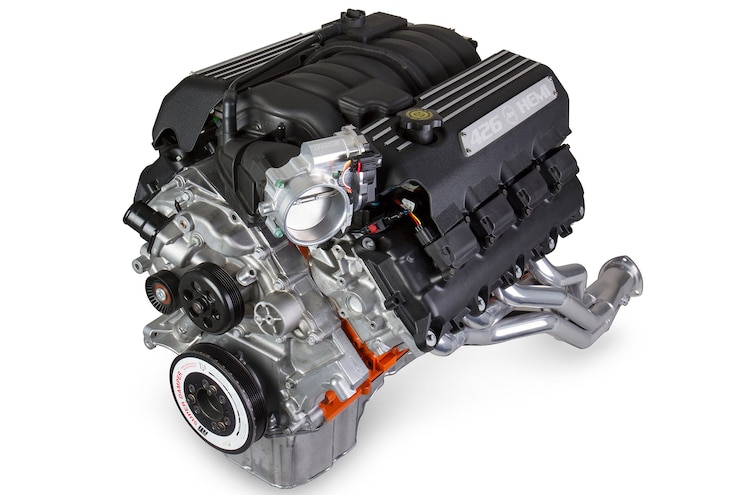 View Photo Gallery | 9 Photos
Photo 4/9   |   History Hemi V8 Engine 426
The 426ci extra big-block was originally built for NASCAR racing inside the ’64 Plymouth Belvedere. The new breed of Hemi swept the top three spots at the Daytona 500. But the Hemi was banned by new regulations in 1965 due to Chrysler’s lack of Hemi street sales and complaints from competitors of an unfair power advantage. Some Dodge Dart, Coronet, and Plymouth Fury models were sold to the public with the race version of the 426, but significant production of milder street configured engines didn’t begin until 1966. This permitted Hemi-equipped stock cars a return to the NASCAR circuit.
The street Hemi was toned down with a lower compression ratio (10.25:1, compared to the race engine’s 12.5:1), replacement camshaft, milder intake and exhaust manifolds, and possibly more. But still put out a respectable 425 hp.

Chrysler’s first- and second-generation Hemis went, for the most part, to racers and high-end performance car buyers. But the third generation maintains the basic Hemi philosophy and produces exceptional power, but this time, anybody can drive one.

Dodge released the 5.7L V-8 Hemi engine with the ’03 Ram 1500, 2500, and 3500. The modern combustion chamber was modified with a near-perfect hemisphere, two spark plugs (akin to drag-race versions), and current technology in spark advance and fuel injection, which improved efficiency significantly compared to the second generation. 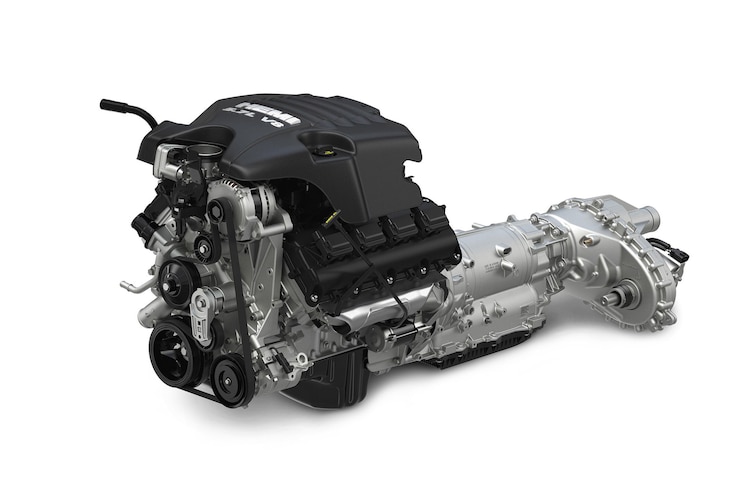 Beginning in ’05, a 6.1L Hemi was available, courtesy of Chrysler’s Street and Racing Technology division. SRT produced sportier models of the Chrysler 300C; Dodge Challenger, Charger, and Magnum; and the Jeep Grand Cherokee. Power was boosted to 425 hp and 420 lb-ft of torque in these SRT8 versions, with help from an improved engine block, lightweight pistons, and modified intake manifold.

Using the 392ci logo (392 Hemi) to connect with the largest first-generation engine and sold only individually in-crate, this new design became available in 2007 with 525 hp and 510 lb-ft. 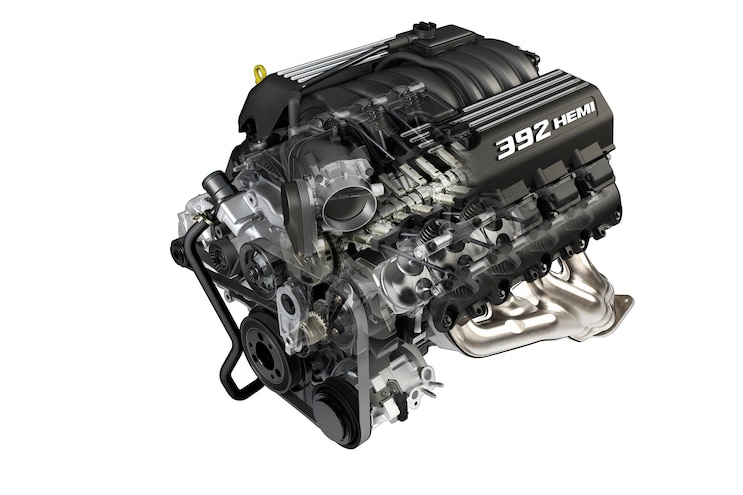 View Photo Gallery | 9 Photos
Photo 6/9   |   History Hemi V8 Engine 392
The production version of the 392 Hemi (or 6.4 Hemi, model-specific), codenamed Apache, is based significantly on the 5.7L (codenamed Eagle) with street horsepower in the high-400s. The new Hemi was released in the ’11 Dodge Challenger SRT, and since then, it’s been made available in the Dodge Charger, Chrysler 300, and Jeep Grand Cherokee.
A 6.4L, specifically tuned for work with increased fuel economy and improved towing force, became available in the ’14 Ram Heavy Duty. It currently sees use in a variety of Ram models, including the rugged Power Wagon.

For ’15, Chrysler got a bit aggressive with the third-generation Hemi and produced the all-new 6.2L Hellcat, available onboard the Dodge Challenger and Charger. Rated at 707 hp and 650 lb-ft, this supercharged beast is currently the most powerful series-production engine in history (excluding exotic limited-production mills from the likes of Bugatti and Pagani). It includes variable valve timing, but Chrysler engineers left out variable displacement. The name pays tribute to Grumman’s F6F Hellcat fighter aircraft, which had a dominant role in the Pacific during World War II. 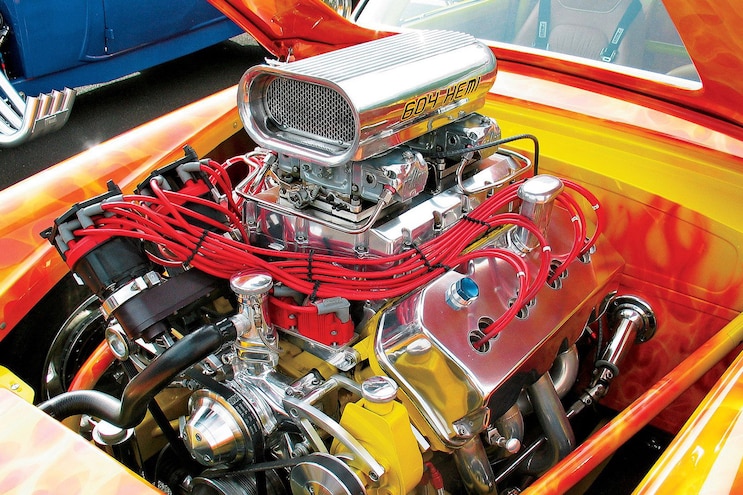 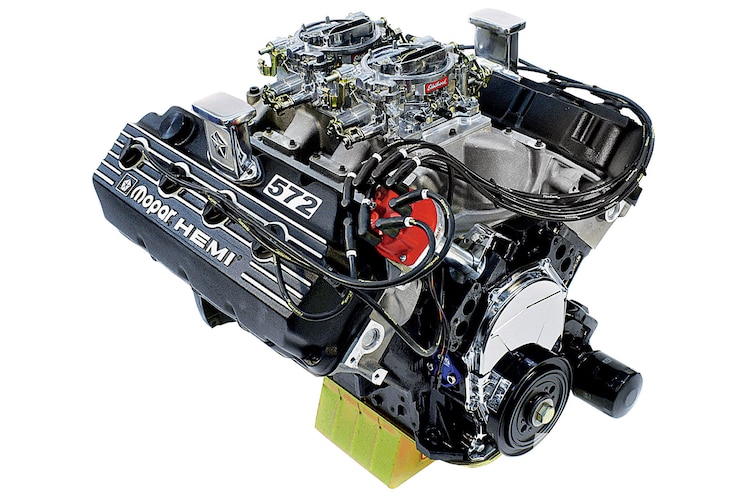