Getting the Dirt Out; Installing S&B Filters Truck Particle Separator

The S&B Filters Particle Separator for the Ford Super Duty 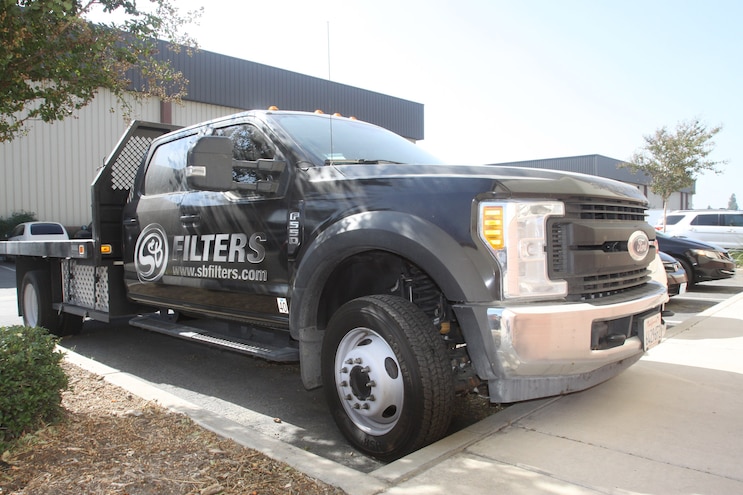 Driving a truck in harsh, dusty conditions is hard on an engine’s air-filtration system. The fine particles of dust and silt found on backroads, as well as in construction and mining sites, can severely diminish a filter’s ability to flow air. Dirty air can quickly clog a filter’s media, seriously shortening the amount of time it is able to do its job effectively. And, as air restriction increases, power decreases, which is especially true for diesel engines that require large amounts of air.
Regularly changing an air filter goes a long way toward keeping performance up. But in the dustiest environments, a regular change could come every other day. That could make for a lot of filter elements to carry with you—especially if you are working in remote areas. Compared to the average truck owner who does not normally expose his or her vehicle to heavy amounts of dust-filled air, it is a tremendous amount of extra maintenance and cost.
Keeping the air efficiently flowing into an engine is important, but making sure the air is clean is even more critical. The worst possible scenario for a truck that is driven primarily in environments that have airborne particles is if a filter does not trap the tiny flecks and they somehow get into the intake. Those particles can rapidly and severely damage an engine. 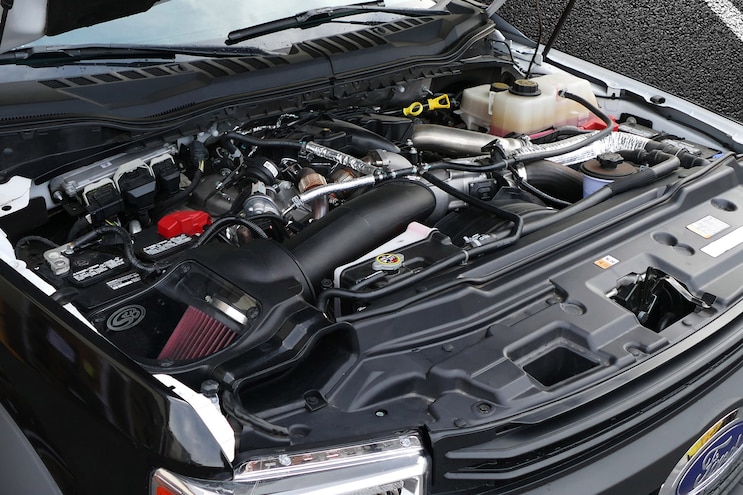 View Photo Gallery | 23 Photos
Photo 2/23   |   Our test rig, S&B Filters’ ’17 Ford F-550, has the company’s cold-air intake system already installed on its 6.7L Power Stroke engine, which simplifies adding the new Truck Particle Separator. The separator is mounted in the same position, and its electrical wiring basically mirrors that of the cold-air system. (“Easy Airflow,” our report on installing S&B Filters’ cold-air intake system on a ’17 Ford F-250 appears on trucktrend.com and in the April 2018 issue of Diesel Power.) 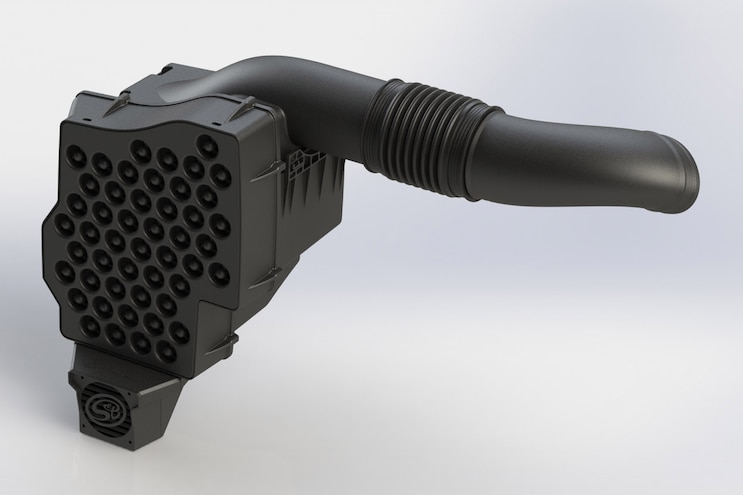 View Photo Gallery | 23 Photos
Photo 3/23   |   Installing S B Filters Truck Particle Separator
Making sure a powerplant gets lots of properly filtered air is a filtration system’s main purpose. S&B Filters understands many people work in environments that subject a truck to endless miles of filter-clogging dirt on a regular basis, and the longer a filter can be kept clean, the better an engine’s performance will be. Filters for diesel trucks can be expensive. So, to combat those tiny airborne particles, S&B engineers developed the Truck Particle Separator.
Inspired by the separators used on military helicopters that eject dust and debris before they are ingested by the turbine engine, S&B’s new device works on the same principle: Eliminate as much dust as possible before it reaches the air filter, thus extending its life and protecting the engine.
S&B Filters’ separator has a couple of key components that allow it to pull the dust out of the incoming air. In the front of the filter housing are 49 vortex tubes. The vortex tubes cause the air entering them to spin, which creates a centrifugal force that throws the dust outward against the sides of the tube where it exits through slots in the rear.
Once out of the vortices, the dust is then drawn downward by a scavenge fan and ejected through the bottom exhaust port. S&B says the system is able to separate and eject 96.99 percent of the dust from the airflow before it reaches the filter, which allows an element to last 25 times longer. In addition to the filth in the air, the system can remove other foreign material, like water and snow.
It’s important to note that the Truck Particle Separator is not an air-intake product that’s designed for improved performance. It only provides slightly more airflow than a clean filter. It is intended for use in trucks that are used primarily in dirty environments. 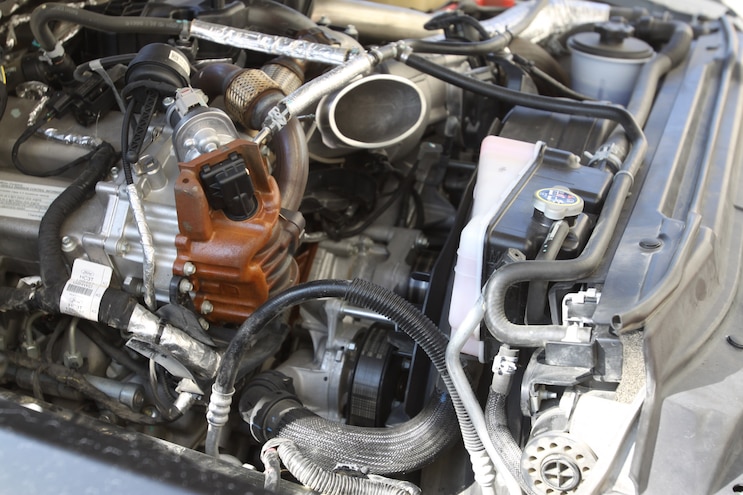 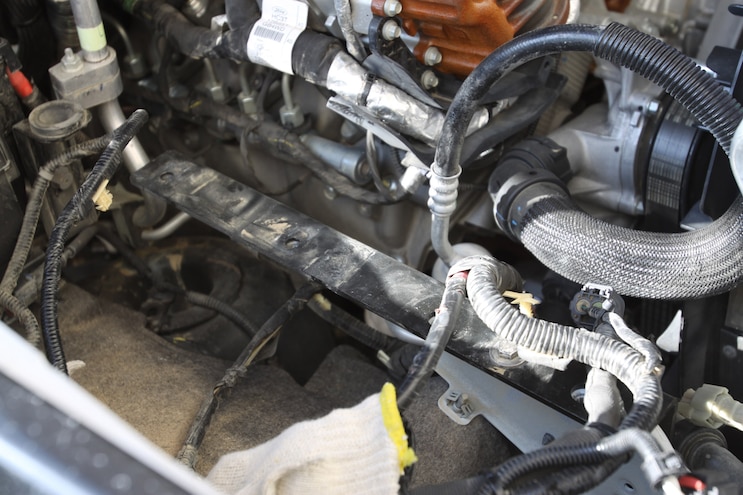 View Photo Gallery | 23 Photos
Photo 5/23   |   A battery-tray relocation bracket is bolted in to move the battery behind the separator, giving it the best airflow possible. Wiring for the battery and sensors is rerouted to accommodate the shift in position. 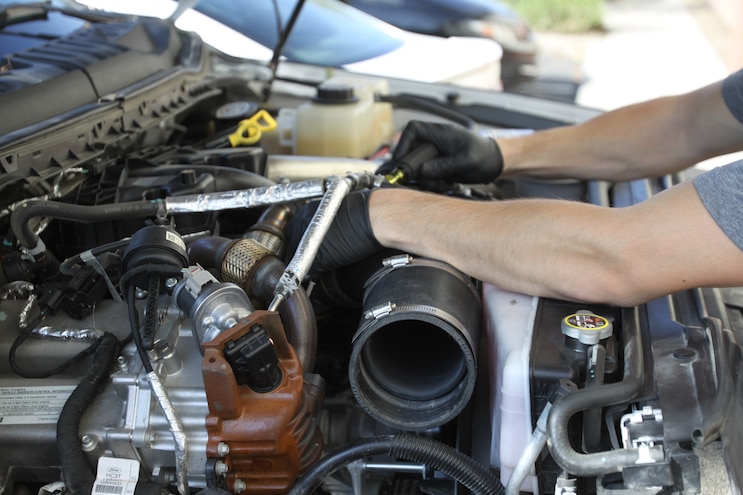 View Photo Gallery | 23 Photos
Photo 6/23   |   Kyle uses a rubber coupler to install the intake tube to the engine. He also installs the rubber coupler on the filter-housing end of the tube. 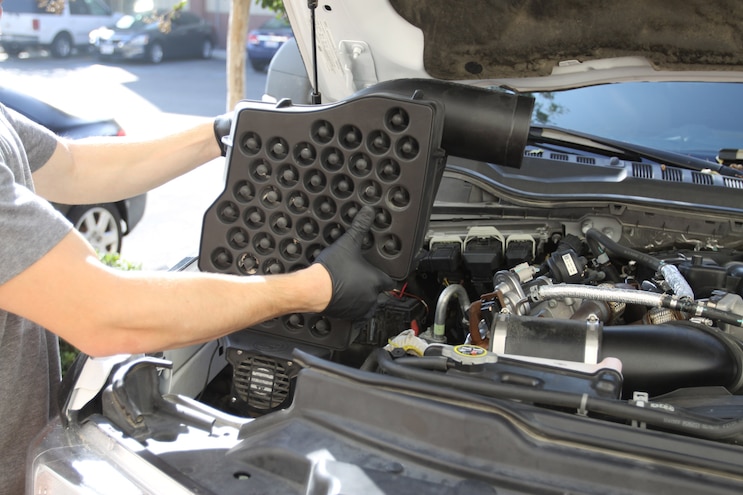 View Photo Gallery | 23 Photos
Photo 7/23   |   With the intake tube in place, Kyle drops the particle separator (with its 49 vortex tubes) into place and secures it. The scavenge fan’s low position at the bottom of the housing draws down the separated particles and ejects them to the underside of the truck. 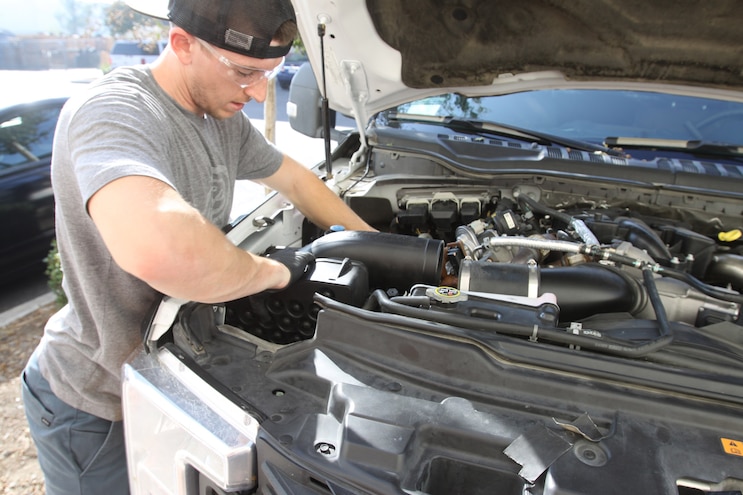 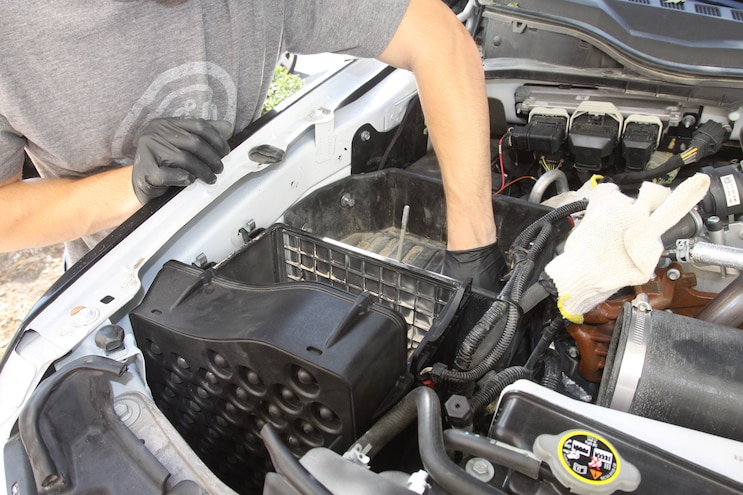 View Photo Gallery | 23 Photos
Photo 9/23   |   The battery tray is then installed behind the separator housing. (The reason many of the components are a bit dirty and not new is this unit is the same prototype that has been used in lab and field testing.) 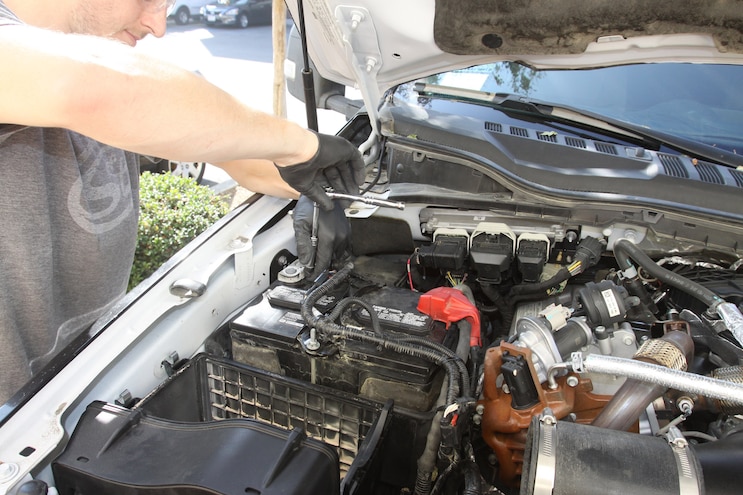 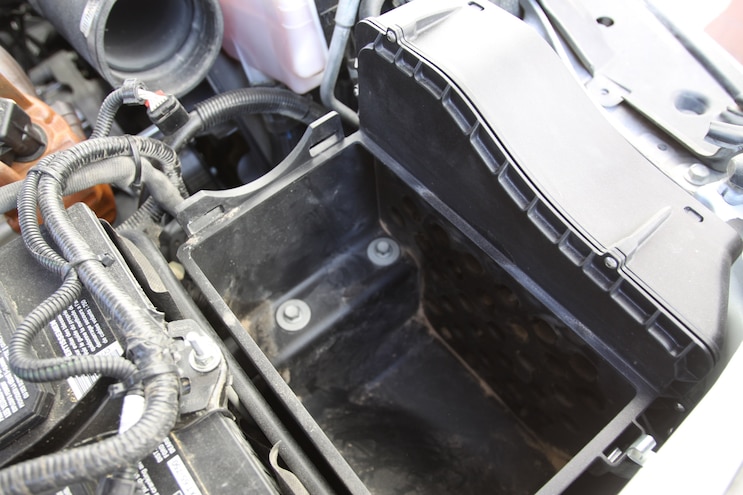 View Photo Gallery | 23 Photos
Photo 11/23   |   After the vortices separate the dust particles, the cleaned air flows into the filter housing. The air filter consumes almost the entire air box, providing as much surface area as possible. 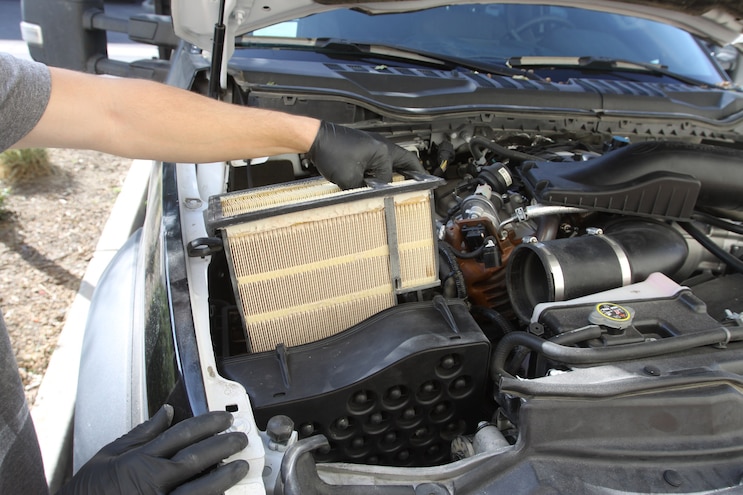 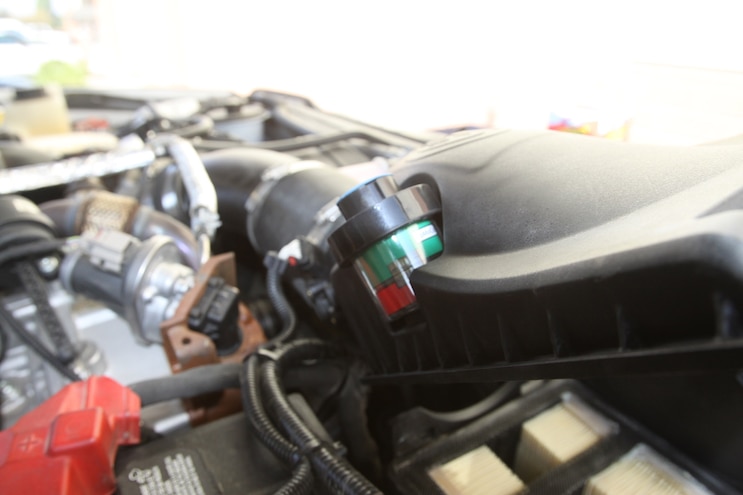 View Photo Gallery | 23 Photos
Photo 13/23   |   The stock air-filter restriction indicator is installed in the lid of the filter housing. 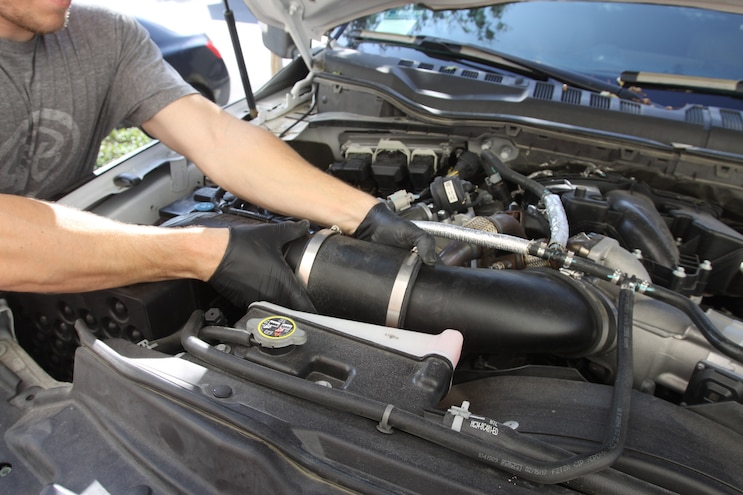 View Photo Gallery | 23 Photos
Photo 14/23   |   Kyle uses a rubber coupler and attaches the lid to the intake tube. In the production version of the Truck Particle Separator, the coupler will be a flexible, accordion-style design that allows the air filter to be easily changed without having to disconnect the lid from the intake tube. 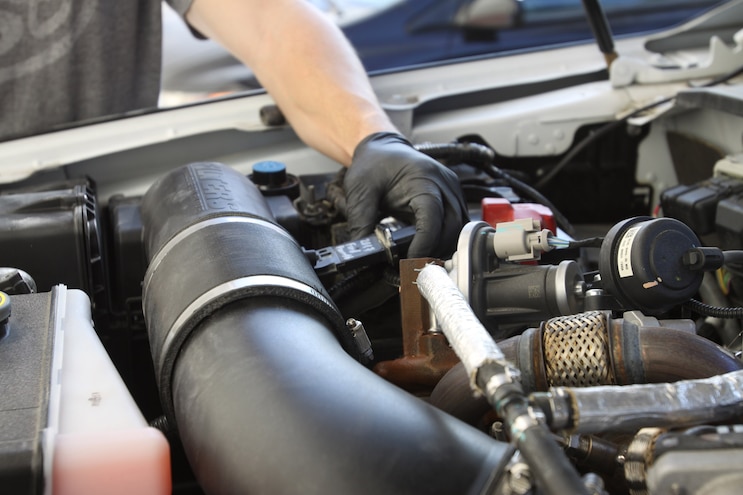 View Photo Gallery | 23 Photos
Photo 15/23   |   The last task is installing the mass-airflow sensor in the intake tube, attaching it with factory screws, and plugging it in. 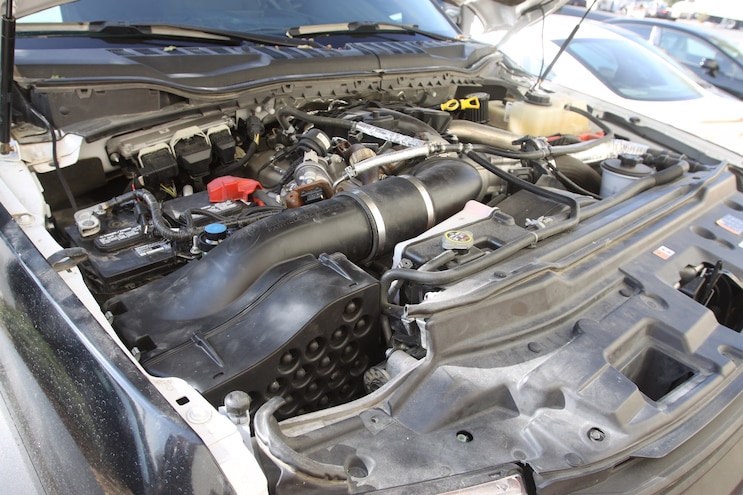 
S&B Filters has spent a lot of time developing and testing its Truck Particle Separator system. Verifying how well something works takes time and requires the proper equipment. At S&B’s Fontana, California–based facility, there’s a climate-controlled room in which a computerized airflow system is used to test filters to meet International Organization for Standardization (ISO) 5011 filtration requirements. An ISO 5011 standard requires the filter being tested to have the highest possible airflow, measured in cubic feet per minute. Using this standard establishes consistency in testing. The system works by drawing in air through an intake or filter, while measuring the amount of airflow that is being drawn through.

The Truck Particle Separator’s efficacy at diffusing dust is computer tested and compared with a stock cold-air setup. Each kit is evaluated using ISO 0-600 micron test dust. The test material is drawn into the intake in measured amounts until both filters’ restrictions hit a certain percentage. The result of the testing shows the stock intake is able to ingest 1,046 grams of dust before hitting capacity, while the Truck Particle Separator is capable of taking in 12,650 grams. That is 12 times more dust than the stock unit. 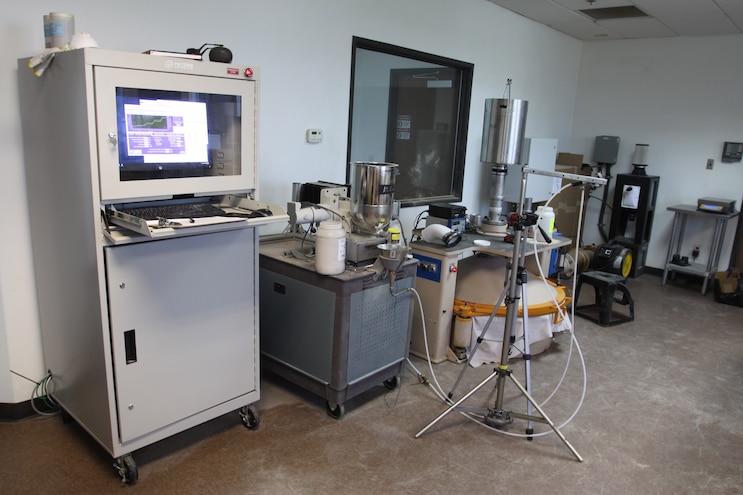 The trucks changed positions between lead and follow multiple times so each truck would get equivalent amounts of dirt saturation from the truck in front. The filters of both trucks were weighed before and after testing so the amount of dust the elements had ingested could be determined. The filter in the separator only collected 30 grams of dust. The stock filter did not fare as well; it was clogged with 694 grams. 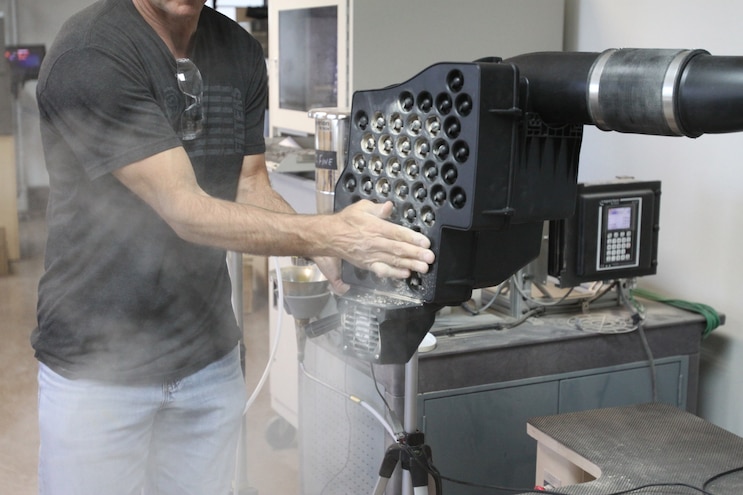 View Photo Gallery | 23 Photos
Photo 18/23   |   With the Truck Particle Separator hooked up to the test equipment and air being drawn through, Berry Carter (owner of S&B Filters) demonstrates how the vortices and scavenge fan work by tossing a handful of ISO 0-600 micron dust into the front of the intake. 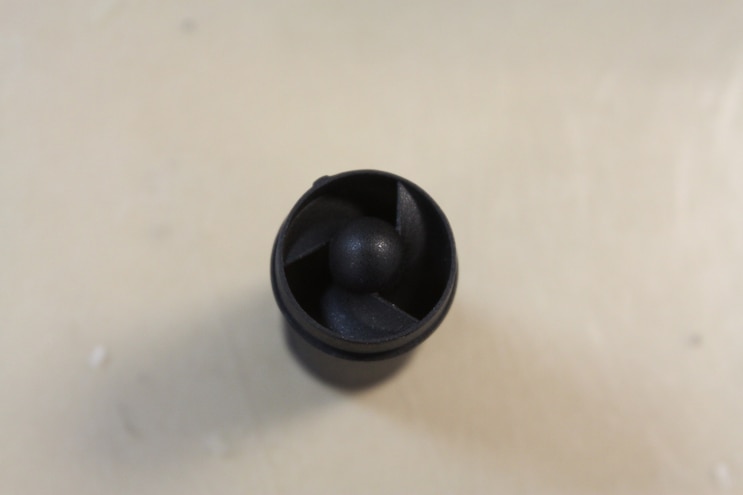 View Photo Gallery | 23 Photos
Photo 19/23   |   A look at one of the vortex units shows the blades that cause the air to spin, which creates the centrifugal force that separates the dust out of the air. 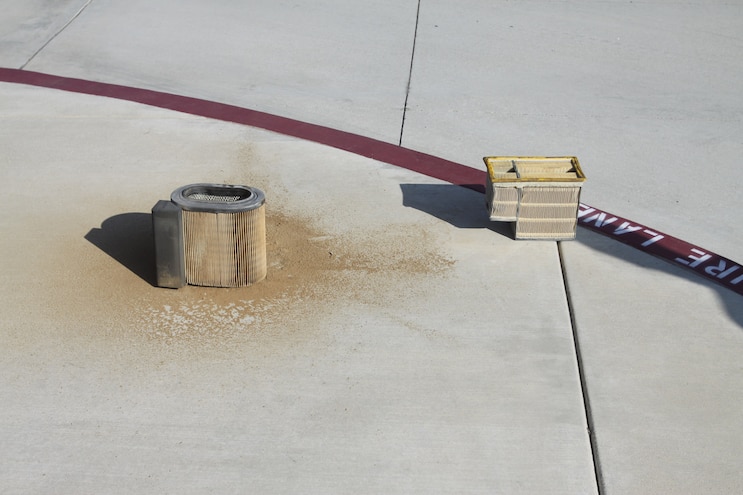 View Photo Gallery | 23 Photos
Photo 20/23   |   The air filters in the two test trucks that made the 91-mile romp across dusty roads were tapped on the ground to show the amount of dirt each had captured. The stock filter on the left collected 964 grams of dust, while the Truck Particle Separator filter on the right only had 30 grams of dust in its folds.
These three illustrations demonstrate how dirty air coming into the Truck Particle Separator housing has the dust separated by the 49 vortices, then ejected from the bottom of the housing by the scavenger fan.