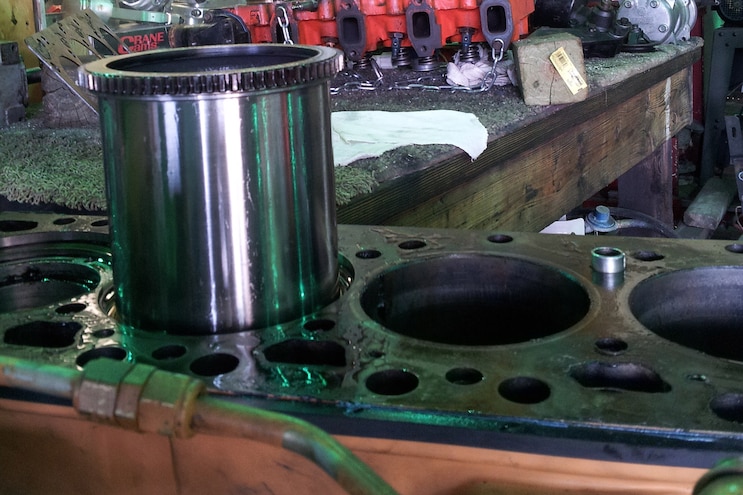 We’ve reported on a lot of innovative diesel parts, concepts, and theories that have been introduced in the last decade, with various engine blocks, cylinder heads, turbochargers, and injection systems undergoing changes in an effort to push the performance envelope further. Even some old ideas (supercharging diesels) are experiencing a rebirth. However, while the technological advancements are awesome—and essential to our hobby—for the most part, basic diesel-engine design and function remain consistent. Well, that’s what we thought, until we got a phone call from Dimitrios Dardalis at the University of Texas in Austin.
Even if we had a million years, we're not sure we would have ever thought of creating a diesel engine with rotating cylinder walls, but that’s exactly what Dimitrios did with the 3.9L Cummins engine featured in this report.
Installing steel sleeves in an engine block is a common restoration practice. The one very unique aspect of this 4BT that separates it from any other redone 3.9L Cummins out there is that its sleeves ride on bearings and rotate in a circle at up to 300 rpm. The function has many advantages, but even this “new” idea is rooted in the past. 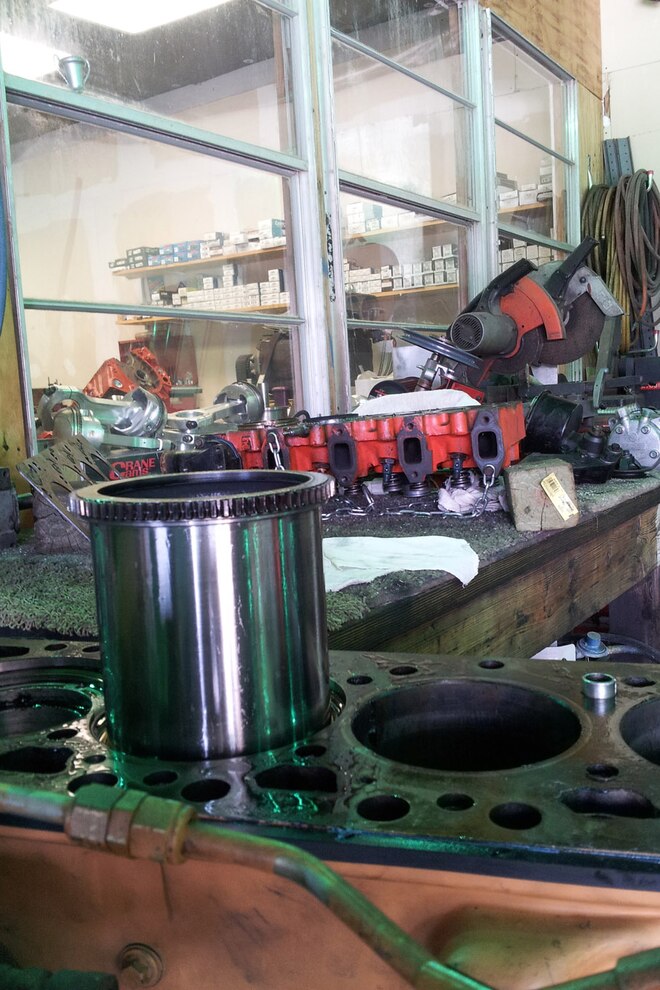 View Photo Gallery | 11 Photos
Photo 2/11   |   Rotating Cylinder Sleeves Overall
The fundamental basis of the concept is well proven by the historic “sleeve-valve engines,” in which the cylinder sleeve briefly but rapidly rotated as the engine approached top dead center. The purpose of the fast-moving cylinder was to replace the conventional valves, which had great perceived benefits for high-performance gasoline engines when high-octane fuel was not available. But the unexpected after effect was nearly 10 times less wear, plus better fuel economy. Unfortunately, modern-era pollution regulations prevent the sleeve-valve engine’s resurrection. Thankfully, one significant feature of it, the moving/rotating cylinder and its associated benefits in friction and wear, is about to make a big comeback.
When trying to mentally process an engine with rotating cylinder walls, it’s important to understand most of the friction in any engine is generated by the piston rings, which have the tough job of sealing oil and compression, without exerting so much pressure that they wipe out the cylinder walls.
With rotating walls, an ample amount of pressure is created for every stroke, as the piston rings dig into the side of the walls at close to top dead center. With the cylinder walls spinning, the rings slide against them in an upward and downward arc instead of straight up and down, producing a hydrodynamic film that protects the surfaces and reduces the friction coefficient by more than 100 times. 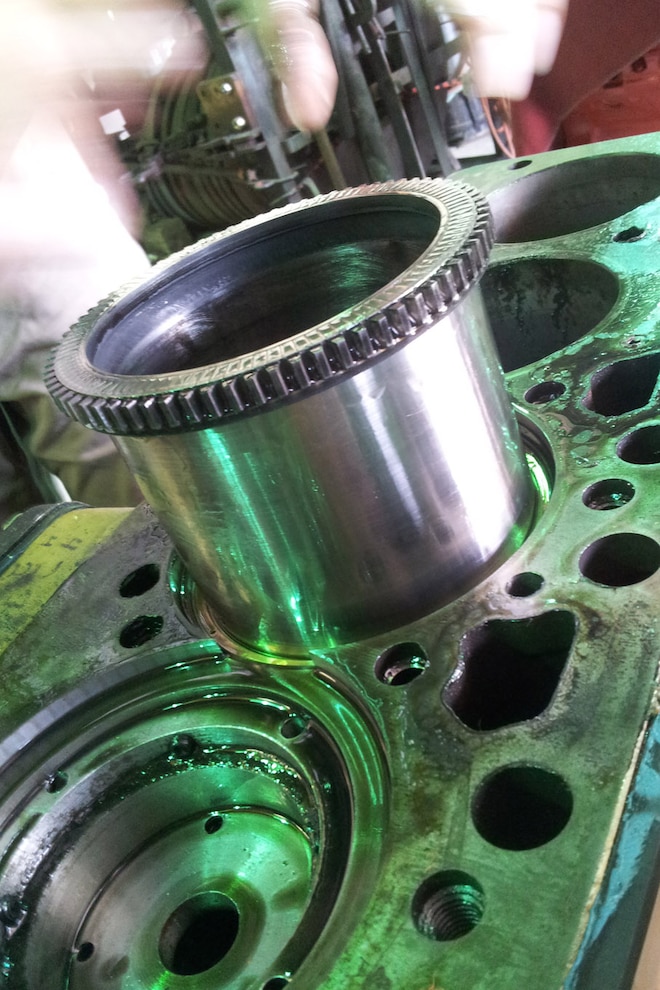 View Photo Gallery | 11 Photos
Photo 3/11   |   This unique cylinder sleeve is the primary component in Dimitrios Dardalis’ experimental rotating-sleeve engine.
So, you’re probably asking yourself, “How does it work?” Well, it’s actually pretty simple. A driveshaft affixed to one of the sleeves drives the cylinder that, through a geartrain, proceeds to turn the other sleeves. Dimitrios wanted the engine to be as simple as possible to increase reliability and decrease costs. The speed of the liners can, of course, be changed through gearing, and cylinder-pressure sensors are used to monitor the engine while it is running. During idling, there is a reduction in peak cylinder pressure compared to a baseline engine, as less force is needed to push the piston downward. This can lead to a more efficient engine that uses less fuel, especially at low load and low-rpm situations. One of the main advantages to this design is it can be incorporated into virtually any existing engine once the conversion kit is developed.
Thus far, a Cummins’ 3.9L I-4 diesel is the only test engine for this design. Still, results from initial tests are encouraging, showing a 25 percent increase in fuel economy at low stationary loads, and a 3 percent increase under peak loads. The average, Dimitrios figures, will be around 8 percent under normal usage in a Class 8 truck driving cycle, and higher for a light duty. “The trend of reducing oil viscosity from the standard 15W-40 grade that has been used for the past 20 years could lead to even more efficiency,” Dimitrios notes. The superior arc formation leads to a huge drop in cylinder wear, which can be a big deal for over-the-road trucks, which can go for millions of miles. 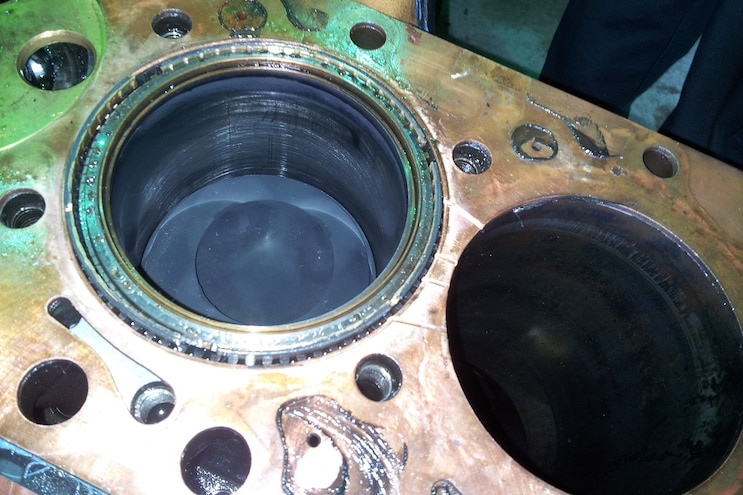 View Photo Gallery | 11 Photos
Photo 4/11   |   Although the 3.9L Cummins I-4’s basic design is retained, some machine work must be performed in order for the sleeves to fit. Dimitrios says JD Machine in Dripping Springs, Texas, was a big help in bringing the prototype to life.
One of the best parts of this innovative idea is its utility. For mechanics, there are many benefits. First, pistons, rings, and liners will have near infinite life. Even the longevity of the crank bearings benefits, because metal shavings do not mix in the oil. Mechanics will be able to perform more "in-frame" rebuilds without taking an engine completely out to replace a bad or cracked piston, or a scored cylinder wall. Just think about it: If everything else is in good shape, just take the head off, pop a sleeve out, press a new one in, and you're ready to go. There’s no disconnecting brakes, fuel lines, steering pumps, transmissions, or any of the other components that make rebuilds so expensive.
So, will this technology catch on? "We just wanted to prove that it would work with the pressure a modern-day diesel engine can produce," Dimitrios says. "You probably won't see this on your next pickup engine, nor the next Class 8 powerplant, given how reluctant manufacturers are to adopt new technologies, but you might see it in 2030. Interest from Asian companies has been expressed. A diesel generator, a boat engine, this would be a great technology for one of those." As development progresses, Dimitrios hopes to find partners from the aftermarket to promote the design in retrofitted Cummins 3.9L or 5.9L engines.
The initial design will be a workhorse-type engine, but as more experience is gained, applying the technology for improved reliability, reduced wear, and longer life under specific higher loads will be explored. Hamilton Cams has already expressed interest and offered to provide low-cost blocks with some of the modifications in the casting included. We're happy someone is actually doing this type of experimentation in an effort to take diesels into the next decade and beyond. 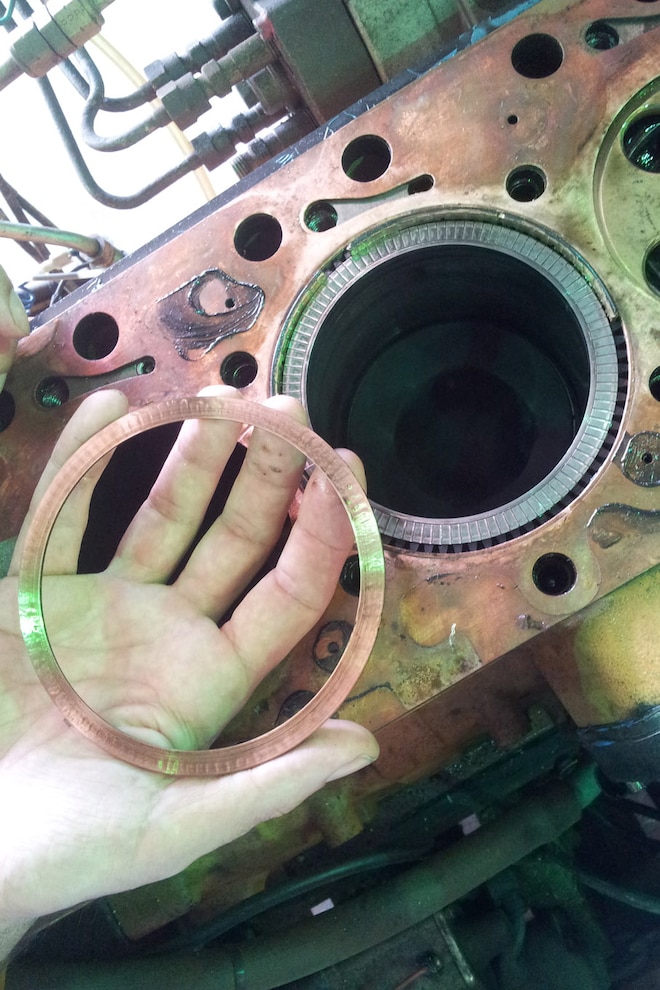 View Photo Gallery | 11 Photos
Photo 5/11   |   A bearing plate is used at the top of the cylinder sleeve to help keep it in place and provide a contact surface when the head is clamped on. 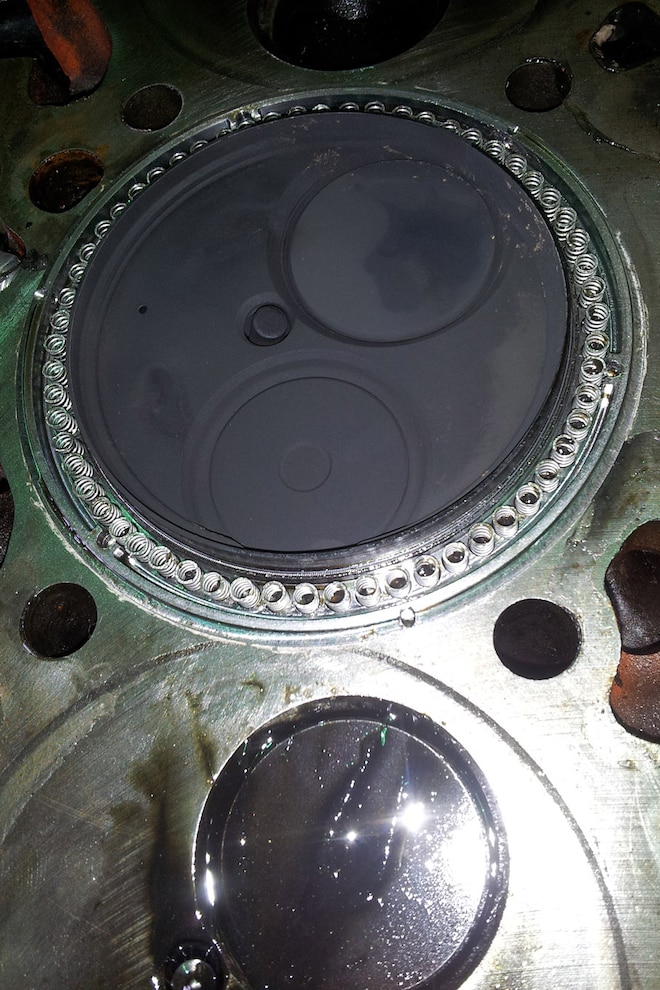 View Photo Gallery | 11 Photos
Photo 6/11   |   The cylinder head is also modified for rotating duty and mirrors the design of the top of the engine block. 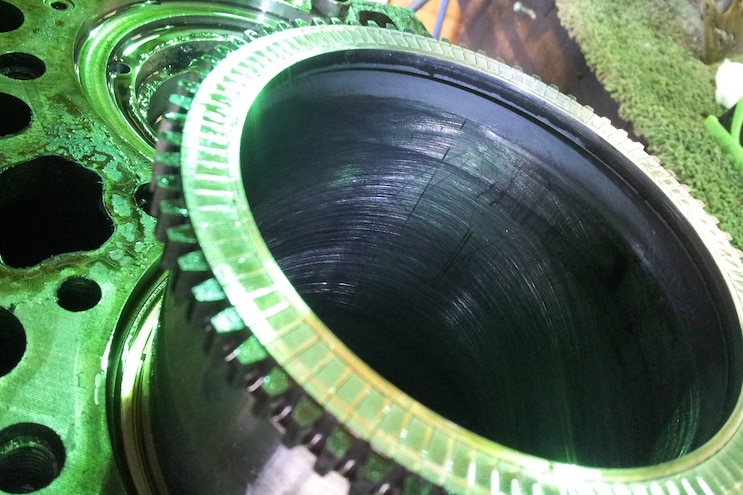 View Photo Gallery | 11 Photos
Photo 7/11   |   Here is the drive gear that rotates the sleeve. It is placed at the very top of the cylinder bore. 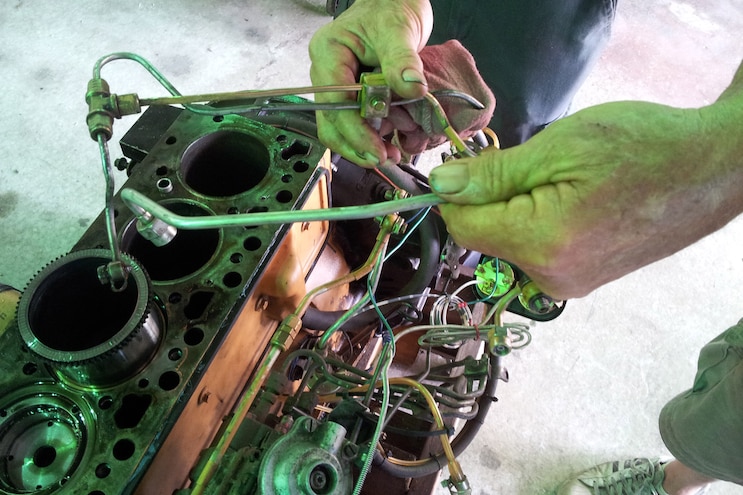 View Photo Gallery | 11 Photos
Photo 8/11   |   Thanks to its simplicity and light weight, a 3.9L Cummins engine is the perfect platform for Dimitrios’ engine experiments. 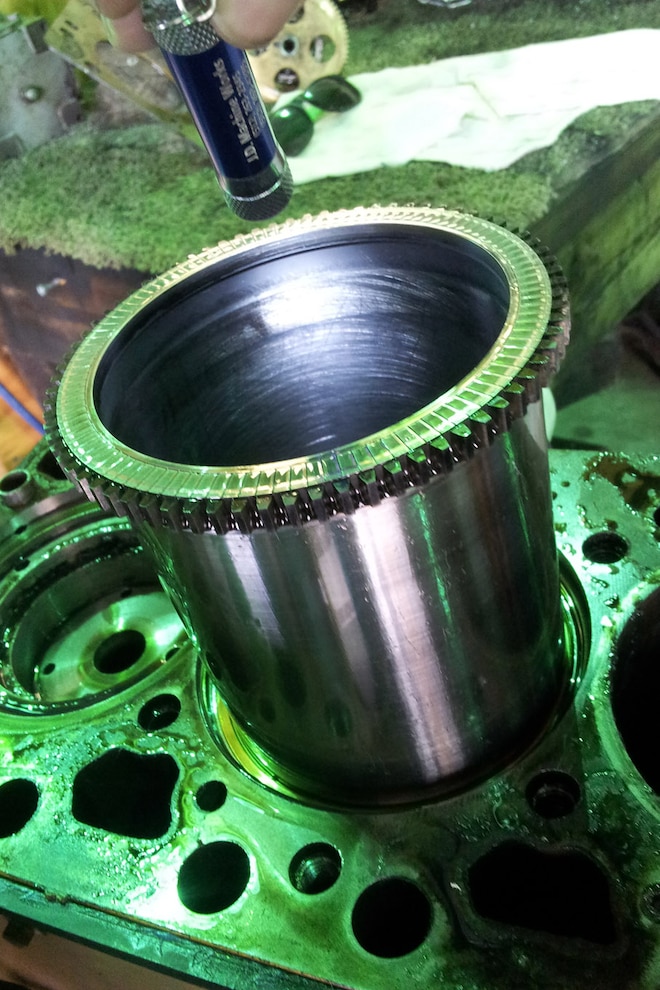 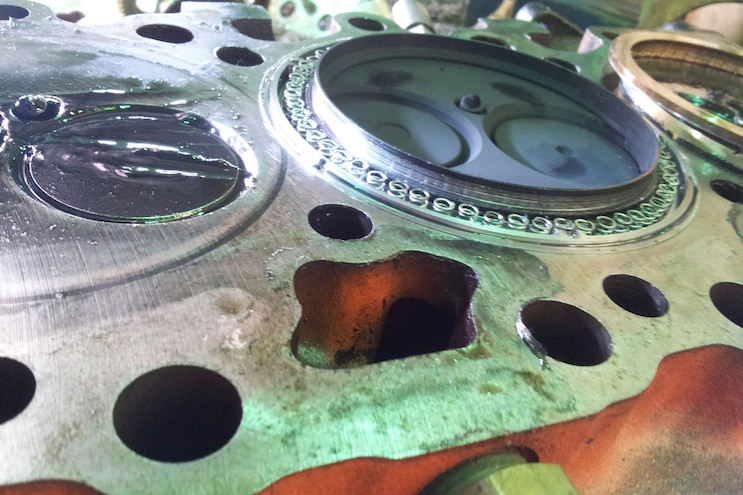 View Photo Gallery | 11 Photos
Photo 10/11   |   The engine was assembled and taken apart numerous times for inspection. As you can see by the film of oil on the head, this engine isn’t just a dream—it’s a runner! 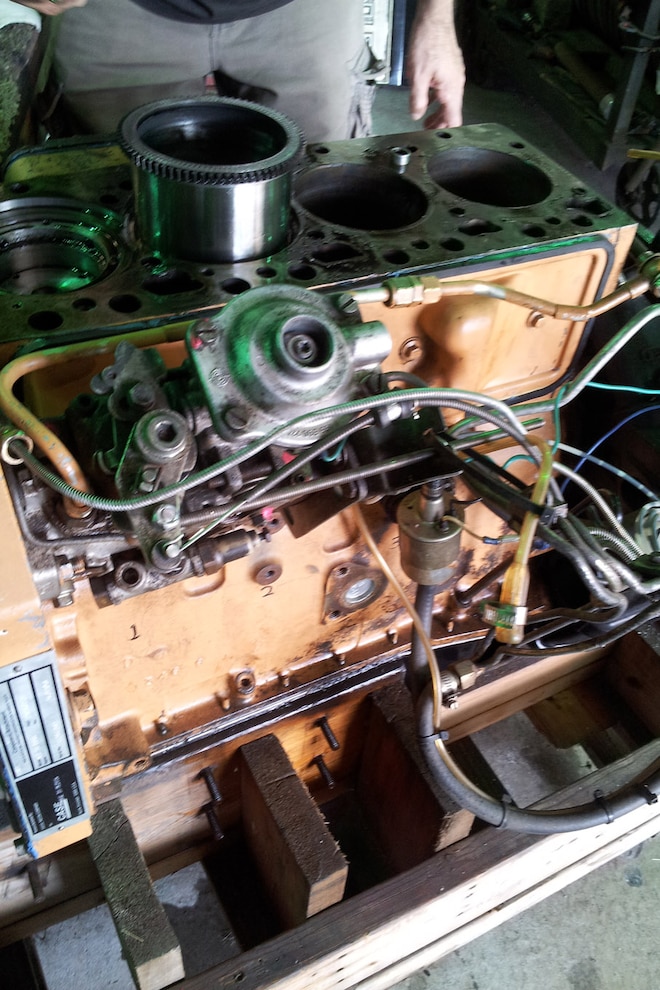 View Photo Gallery | 11 Photos
Photo 11/11   |   Dimitrios plans on refining and expanding his development on Cummins engines since there are hundreds of thousands (millions?) of them already out there.