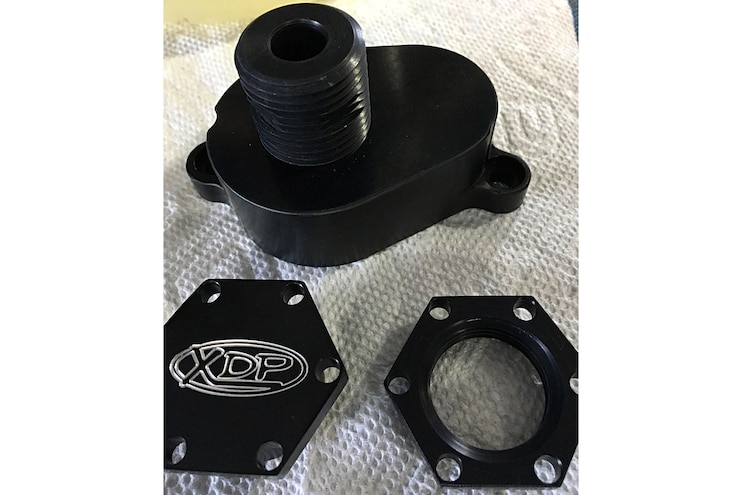 Anyone remotely familiar with diesel engines understands the importance of oil and coolant, as they are the lifeblood of the powerplant. Oil lubricates, water cools—and one without the other typically leads to catastrophic results within minutes of turning the key. Even with both present, if either one isn’t properly maintained, the longevity and proper operation of the engine’s components is compromised.
Ford’s 6.0L Power Stroke engine is a good example of this, as the engine’s oil not only lubricates the rotating parts, but it powers the fuel-injection system. If the oil isn’t properly cooled, eventually the high-pressure oil system and injectors fail. That’s why the engine-oil cooler, which uses coolant circulated through its radiator-like core, is a critical component related to the engine’s performance and durability.
It’s important to understand that coolant breaks down just like oil does, but at a much slower rate over a longer time. Age, heat cycles, contamination from using non-distilled water, incorrect dilution, not adhering to recommended coolant-change cycles, and/or mixing coolant of different chemical compositions can all create big problems with coolant. 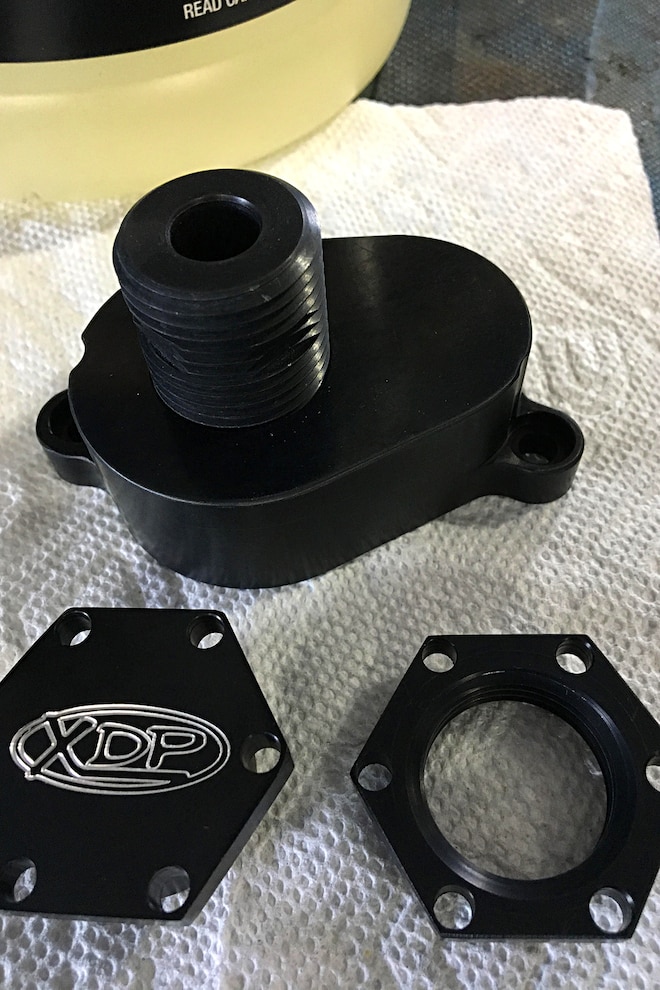 View Photo Gallery | 13 Photos
Photo 2/13   |   Xtreme Diesel Performance’s Oil Cooler Flush Kit for trucks driven by Ford’s 6.0L Power Stroke engine bolts to the oil cooler and allows users to quickly and easily “back-flush” it, dislodging the gunk and debris that reduce its effectiveness.
This degradation is the primary cause of the tiny passages inside the oil cooler becoming plugged with residual sand and grit from the original engine casting process.
Coolant experts, such as those at Castrol Labcheck (BP Lubricants USA), say mixing of coolant at too high of an antifreeze/ethylene glycol percentage can cause cavitation and pitting inside the water passages, reducing the coolant’s ability to transfer heat and introducing metal particles into the coolant. The wrong mixture can also lead to silicate and phosphate deposits to form, resulting in a heavy sludge accumulating throughout the entire cooling system over time.
As ethylene glycol in the coolant continues to break down, it can create several forms of acids that cause metal corrosion and scaling in water passages. Then there are the coolants that use silicon as a corrosion inhibitor (silicon can also be introduced through use of non-distilled water), which can turn to silica gelation—that thick, green, sticky sludge often seen in accumulated in 6.0L oil coolers.
All that goop and debris in the coolant flows through the radiator, water pump, heater core, and engine block, and it eventually ends up packed in the passageways and fins of the oil cooler because they are the smallest openings in the cooling system (other than a filter). View Photo Gallery | 13 Photos
Photo 3/13   |   Coolant must be drained before installing the flush kit. PSP Diesel technician Dante Garcia opens a petcock on the radiator and removes the two plugs on the bottom of the block to get the water out. The lower radiator hose remains attached to prevent the hose from being stretched.
When the coolant flow through the cooler is reduced or stopped altogether, the engine-oil temperature rises above safe levels, sending the super-heated oil on to the high-pressure oil pump and injectors, accelerating the wear and eventual failure of those components.
Low or stopped coolant in the oil cooler also directly affects the exhaust-gas recirculation cooler, which is the next destination for coolant in the 6.0L’s cooling scheme. When the EGR cooler doesn’t have the proper amount of coolant, those high-heat cycles eventually cause it to rupture, as it is literally baked from the inside out by the hot exhaust gases passing through it.
Since you can’t see inside the oil cooler, the only way to keep an eye on how efficiently it is working is by watching the oil and coolant temperatures. The difference between them is called the “delta (T).”
When all is good with the oil cooler, the delta (T) should be no more than 10 degrees F at highway speed, with the engine operating at around 190 degrees. (Oil temperature will usually be 5 to 10 degrees higher than water temp.) There’s a problem brewing inside the cooler if the delta (T) is greater than 15 degrees.
If the delta (T) is out of that safe range, it’s time to flush the entire coolant system—and possibly replace the oil cooler. There are many articles, blogs, and videos online that show how both are done. Both procedures, when done correctly, should result in bringing delta (T) back to an acceptable level. Flushing the cooling system and replacing the oil cooler are time consuming and costly aspects of owning a diesel (the cooling system should be thoroughly flushed at least every 50,000 miles according to Ford Power Stroke engineering insiders). 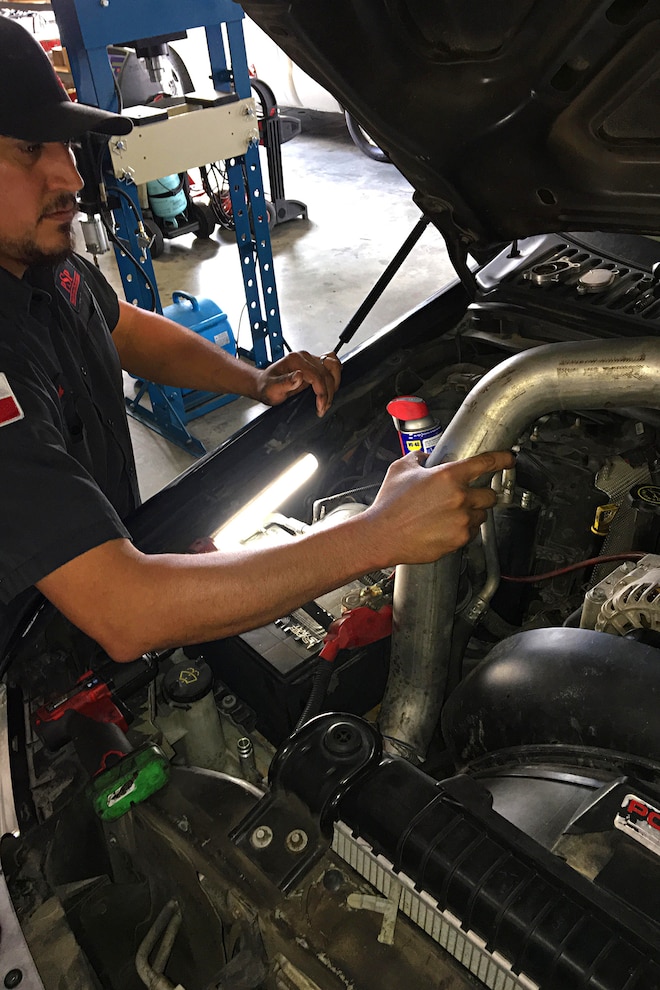 View Photo Gallery | 13 Photos
Photo 4/13   |   If the turbocharger isn’t being removed, the charge-air-cooler pipe must still be taken off (in this photo, PSP’s Richard Alvarado takes care of the task), in order to gain access to the top rear of the oil cooler. The best opportunities to install the flush kit are when the turbo is being pulled or the oil cooler is being replaced.
A cheaper and quicker alternative to flushing the entire cooling system or replacing the oil cooler is to “back flush” the unit, and Xtreme Diesel Performance offers a cool kit that’s designed expressly for that purpose.
“With our 6.0L Power Stroke Oil Cooler Flush Kit, the oil cooler can be back-flushed in less than an hour,” says XDP’s Joel Bliss. “By directing water flow in the opposite direction of normal travel, contaminants are dislodged and, in most cases, the cooler is returned to like-new effectiveness.”
XDP claims its flush system, which retails for around $175, has several advantages over the other alternatives:
- It doesn’t require removal of the stock cooling manifold or the quick-connect hose between the oil cooler and the EGR cooler.
- The flush system is compatible with street-legal and competition-only trucks.
- It reroutes and improves coolant flow for lower delta (T).
- A standard garden hose is used to supply the water source for flushing.
- XDP includes a valve that blocks water flow into the EGR cooler while the flush adapter is in use, ensuring all the water force is directed through the cooler for maximum cleaning effectiveness.
- It can be reused over and over again, and the engine isn’t altered in any way. There is no need for any part of the tool to remain on the vehicle.
It’s also quite simple to install, as PSP Diesel’s Dante Garcia demonstrates. 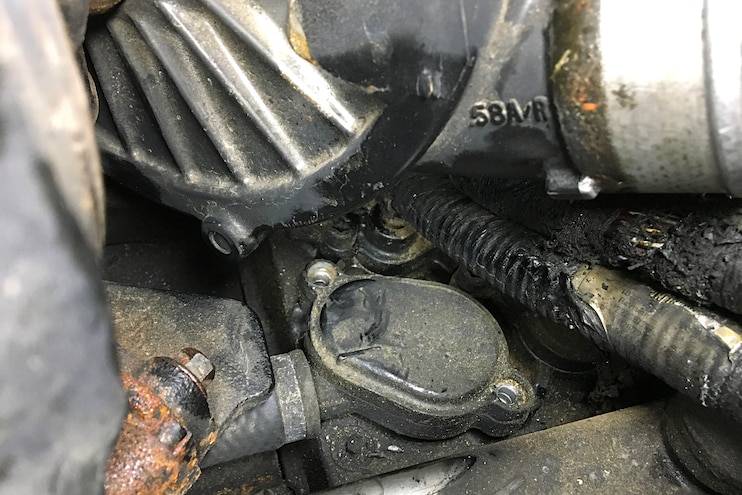 View Photo Gallery | 13 Photos
Photo 5/13   |   Dante uses a 5/32-inch Allen wrench (or T30 Torx bit) to remove the two bolts that hold the stock cap on the oil cooler. The XDP back-flush valve replaces this cap. Note the rust and deposits on the underside of the stock cap. 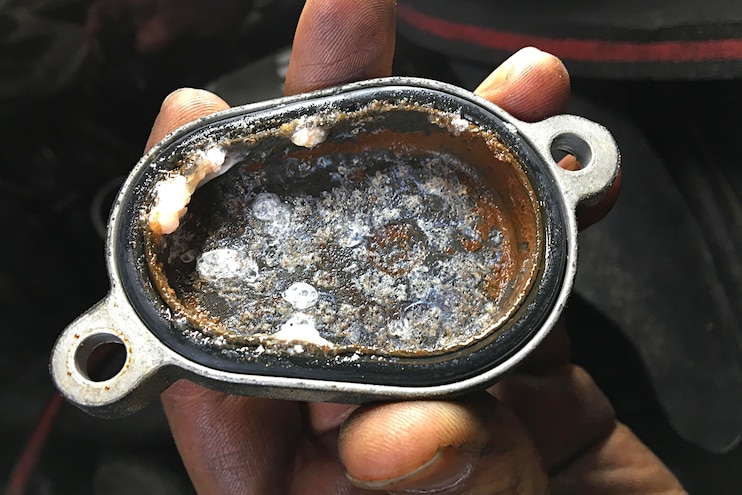 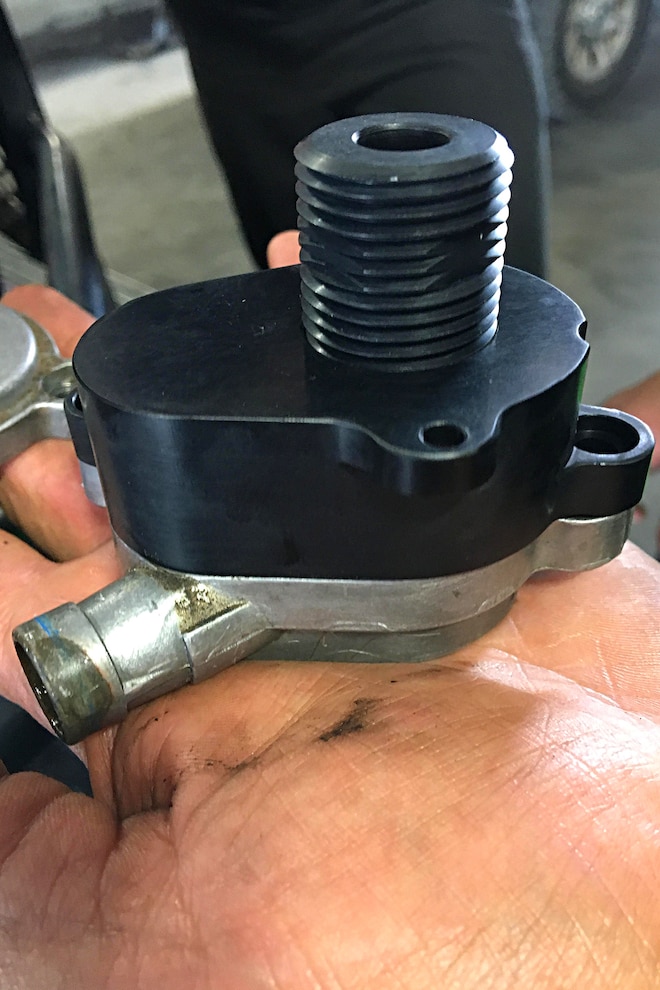 View Photo Gallery | 13 Photos
Photo 7/13   |   Working space is tight if the turbo is not taken out. Dante uses a short-handled 5/32-inch Allen wrench (or T30 Torx bit with a ¼-inch wrench)—the easiest way to bolt the XDP adapter back onto the oil cooler. 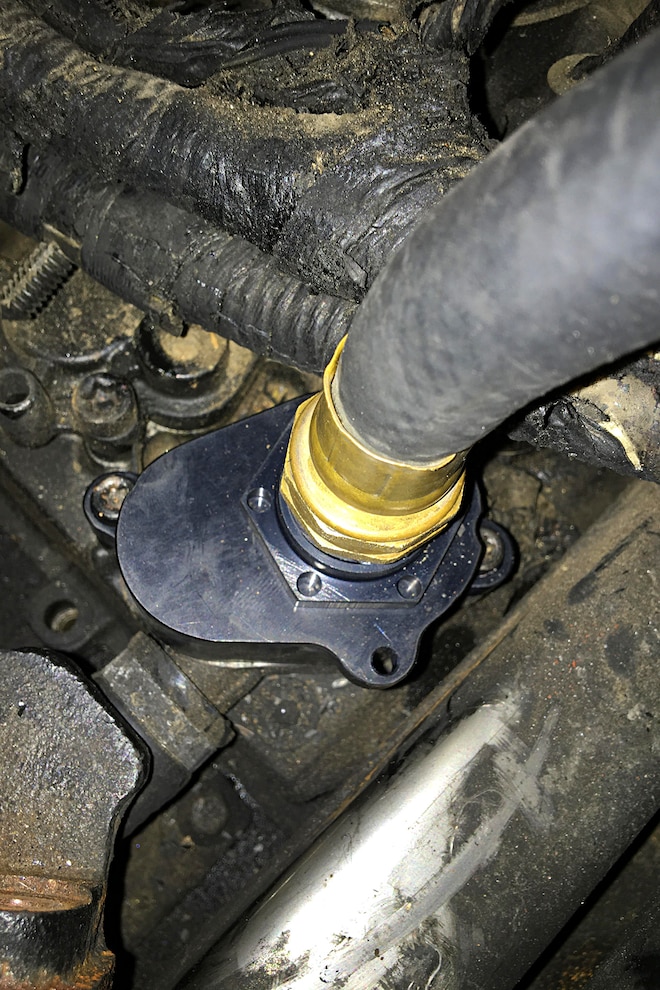 View Photo Gallery | 13 Photos
Photo 9/13   |   Dante connects a hose and flushes the oil cooler. The system is purged until a steady flow of clear liquid is discharged. Note how dirty the oil cooler on our test F-250 was. 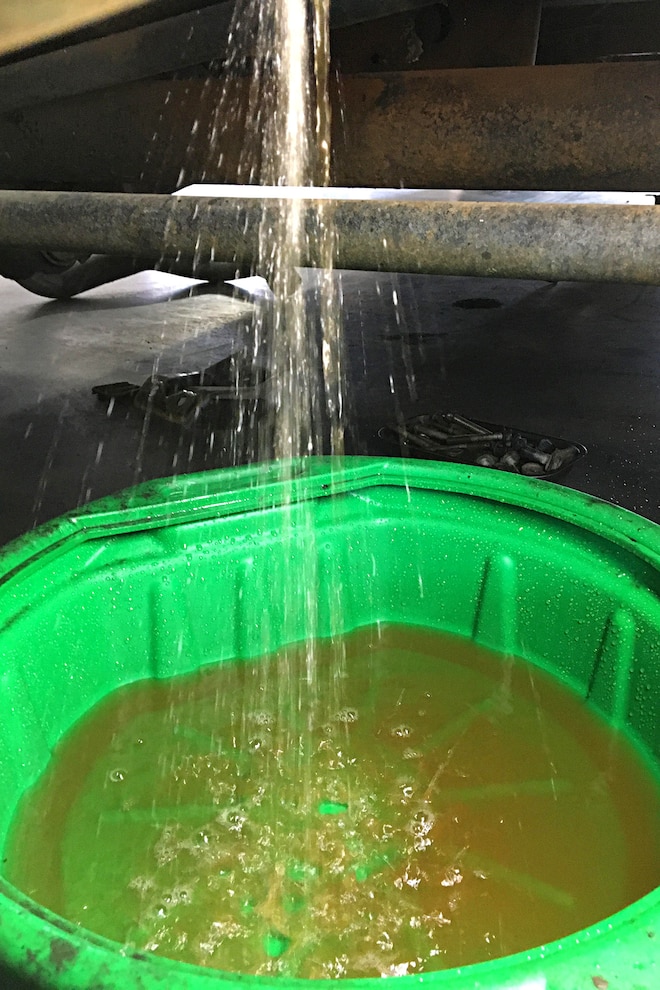 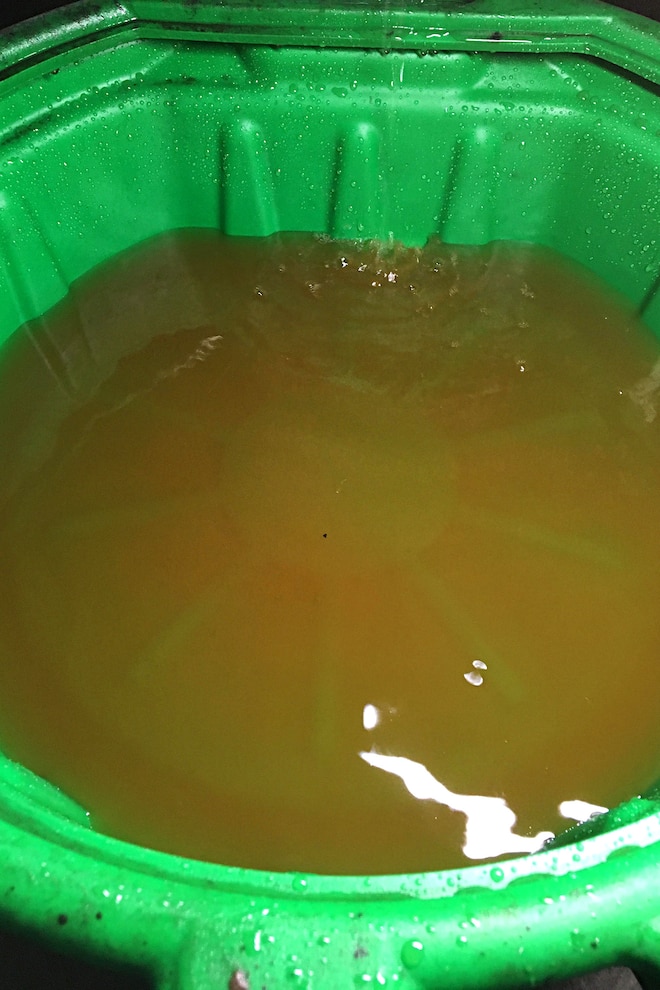 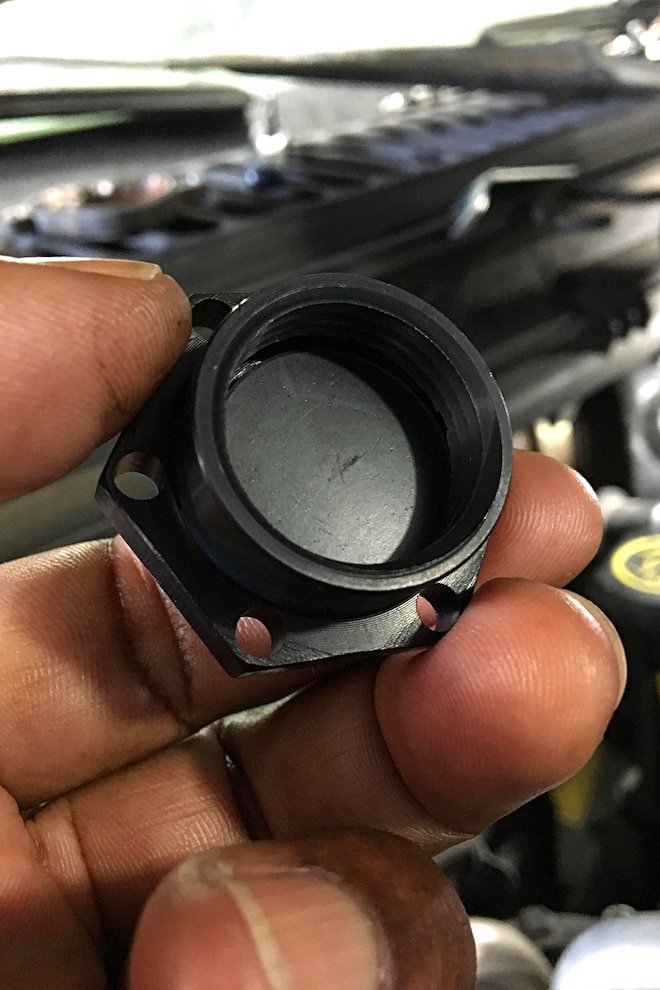 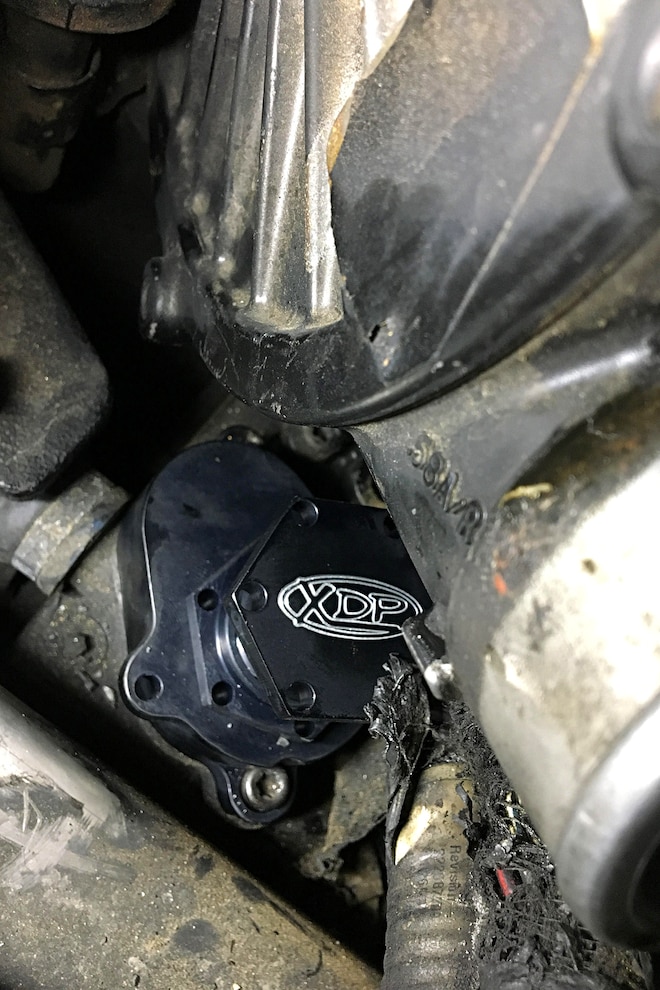 View Photo Gallery | 13 Photos
Photo 13/13   |   After the flush is completed, Dante screws on the aluminum XDP knob and lock washer and tightens it. He then reinstalls the charge-air cooler pipe, closes the coolant drains, and refills the system with new coolant. PSP Diesel prefers using either Ford VC-7-B Gold or Zerex G-05 antifreeze/coolant. The 6.0L engine holds 7 gallons in a 50/50 mix of concentrate and distilled water.