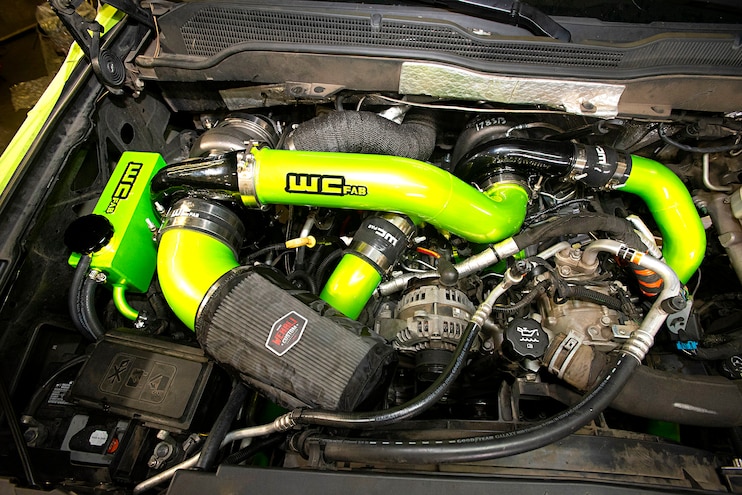 When we began this journey, we wanted to present to you a CP3 injection-pump conversion and a Wehrli Custom Fabrication compound-turbocharger kit installation on a ’15 Chevrolet Silverado 2500HD, powered by a 6.6L Duramax LML engine. The bolt-on effort is usually simple and straightforward, requiring only three or four days in the shop to accomplish. In and out. Right?
As we all know, sometimes things just don’t pan out as expected. As we covered in the first report of this two-part series (“Pumped Up,” May 2019), replacing the truck’s stock Bosch CP4.2 high-pressure injection pump with a Fleece Performance Engineering CP3 750 conversion kit was executed without issue. However, when technicians at Dunks Performance pulled the cylinder heads to upgrade the engine with ARP studs (as insurance against the higher cylinder pressures expected from the compound turbos), we discovered seven pistons were cracked at the edges of their fuel bowls. Had the new turbos been installed without this discovery, the engine’s life would have been short-lived under the heavy towing missions in store for the Silverado. 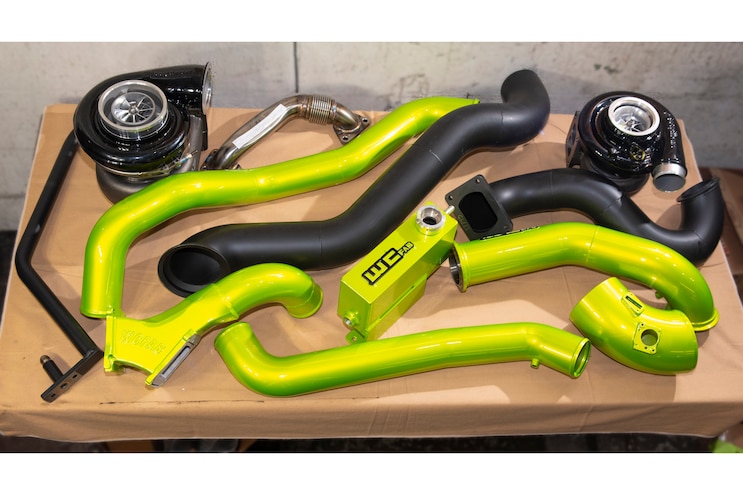 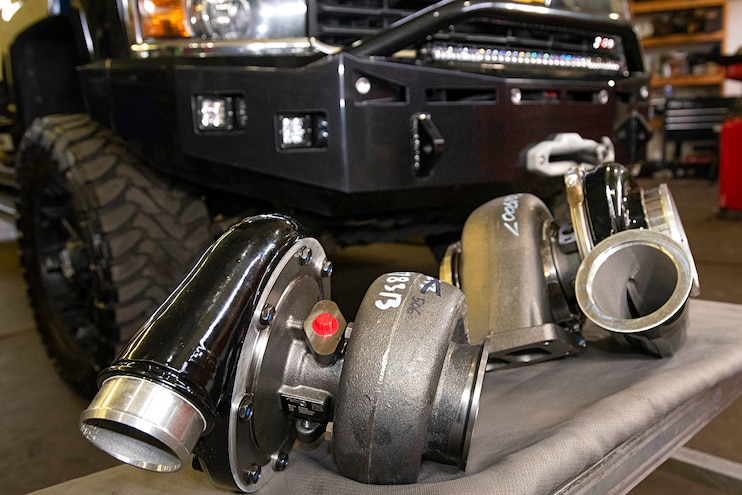 View Photo Gallery | 30 Photos
Photo 3/30   |   We selected a BorgWarner S475 fitted with a billet compressor wheel and T6 1.15 housing for the atmospheric turbo (foreground) to feed BorgWarner’s S364.5 SX-E with a billet wheel, 73mm turbine, and Holset HX40 outlet. WCFab powdercoats housings per customer choice.
The next big step was to pull the pin connectors at the engine-control module and rearrange the firing order to work with the engine’s new alternate-fire cam. A modified firing order helps relieve the harmonic stress placed on the front portion of the crankshaft. That stress typically results in the crank breaking anywhere from the snout to the third rod journal. Changing the firing order from 1-2-7-8-4-5-6-3 to 1-5-6-3-4-2-7-8 alleviates that issue.
The stock engine was replaced because its pistons cracked after enduring long periods of high EGT. The Mahle Motorsports pistons in the new DFC engine are far more robust.
“Our cast performance DMAX pistons offer several benefits over the OE piston in this application,” says Mahle’s Justin Dossett. “The crown of the piston is thicker to accommodate higher cylinder pressures, and the inertia load capacity was increased for higher rpm capability. They maintain a cooling galley to help keep piston temperatures in check and utilize a Ni-Resist top ring insert to aid in top ring groove strength. 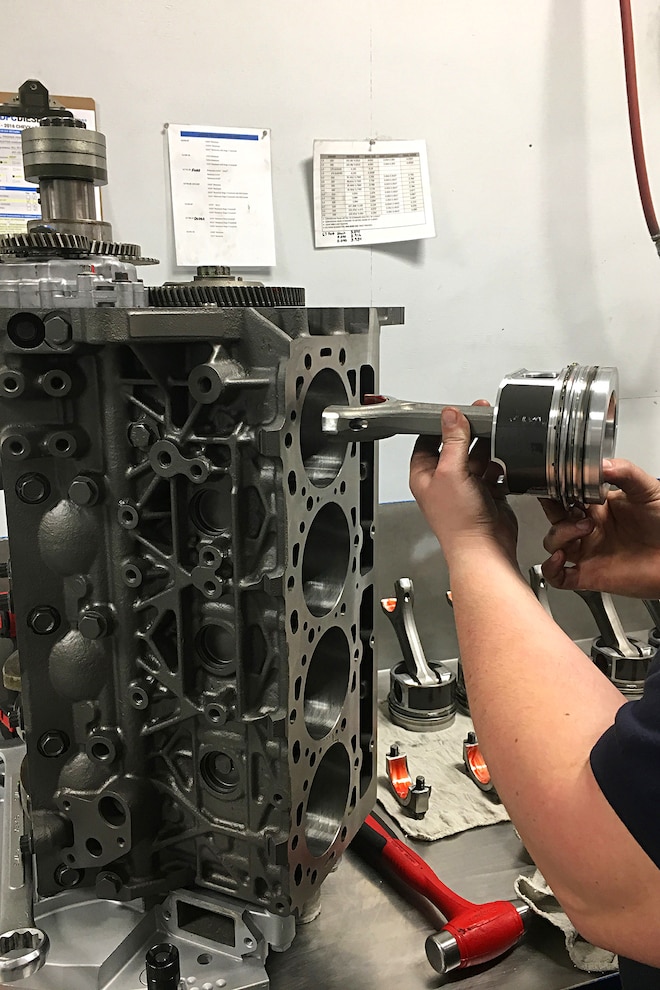 View Photo Gallery | 30 Photos
Photo 4/30   |   The ’15 Chevrolet Silverado 2500HD’s stock 6.6L Duramax LML block is toast, so the customer sourced a new “Race Series” long-block from DFC Diesel Rebuilders, which has a five-year, 100,000-mile warranty. It is balanced, blueprinted, meticulously machined, and fitted with some of the best diesel performance components available, including Wagler Competition Products’ alternate-fire camshaft.
“The compression height of these pistons has been reduced 0.010 inch to allow for decking/trueing of the block and setting the desired piston protrusion. In addition, the bowl design features a de-lipped and heavily radius’d version of the OE bowl and maintains the OE 16.8:1 compression ratio.”
Justin says the de-lipped bowl allows for more aggressive injection timing, while the heavy radius reduces stress risers and potential for cracking in the bowl rim.
Also, a Thermal Barrier coating is applied to the piston crowns, says Brandon Burleson, who oversees this special process at Mahle. “The coating is durable, resistant to thermic shock, and reduces heat transfer to increase performance. It’s a combination we expect will work very favorably in high-performance Duramax LML engines used for towing heavy loads.”
With the CP3 installed and injectors’ firing order changed, Eric finally worked on getting the Wehrli Custom Fabrication compound-turbo setup installed. The BorgWarner S400/S300–based kit is remarkably complete. However, despite its thoroughness, there are no instructions. That’s just something to keep in mind if you are a DIYer and taking on this project for the first time. Fortunately, the technicians at Dunks are plenty familiar with it, so for them the installation was not much different than doing a turbo swap on a typical 6.6L Duramax.
Why do compound turbos work well on a street/work truck? There are several reasons. One is that compounding over the high-pressure turbocharger flows a lot more air through the engine, resulting in lower exhaust gas temperature across the entire rpm band. The second reason for adding an “atmospheric” ’charger to feed the high-pressure unit is to reduce turbo lag for faster spooling.
The end result is quicker throttle response and boost, with better efficiency and lower EGT across a wider rpm range. It’s a good combination for those who use their trucks for towing. This is all predicated, of course, on choosing the right combination of turbochargers.
The compounds we’re installing center around a BorgWarner S475 atmospheric turbo with a 1.15 housing, feeding a high-pressure S364.5 SX-E with a 73mm turbine. Both are fitted with billet compressor wheels, and their housings are powdercoated gloss black. The compound system is a stark contrast to the custom, Shocker Yellow–powdercoated aluminum tubes of the Mishimoto air-to-air intercooler that was already in place.
Installing compound turbos requires moving the passenger-side battery forward, replacing the stock coolant bottle (with WCFab’s piece that installs where the battery used to reside), removing the EGR system, and installing a new exhaust because the WCFab downpipe is much bigger (diameter) than the original tubing. It also requires a custom tune, which we will eventually tap the expertise of EFILive to handle.
We still have a few more things to check off before this project is complete. The stock Allison 1000 six-speed automatic transmission needs to be rebuilt and beefed up so it can handle the expected boost in power.
Breaking in the new engine before putting it on a dyno is also important. Our plan is to put between 500 and 1,000 miles on the powerplant, while also changing the oil at least twice during that time.
In “stock” trim, with only a tune and 35-inch mud tires, the original engine made 511 hp and 1,038 lb-ft. of torque on the chassis dyno at FTW Tuning. We expect those numbers to be higher with the compound turbos and EFILive tuning. How much more is a little bit of a guessing game at this time.
We can’t wait to spend a little time on the road with this one, and then put it on the rollers again to see what a compound-turbocharged 6.6L Duramax LML is all about. 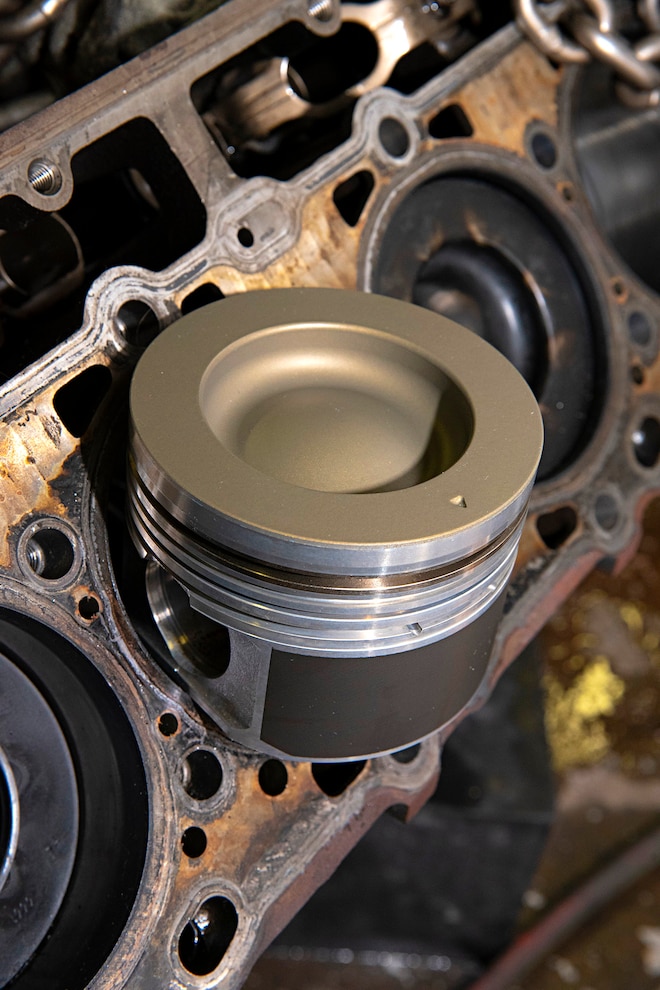 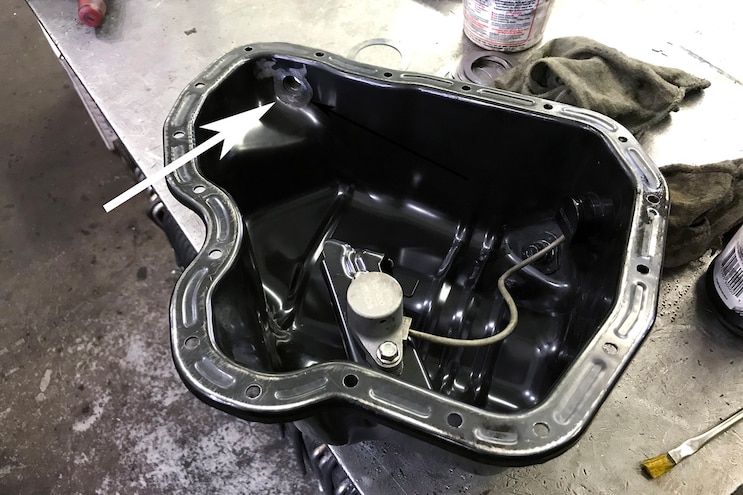 View Photo Gallery | 30 Photos
Photo 6/30   |   Before dropping the new engine into the Silverado, the stock oil pan is replaced with the WCFab pan, which has a special bung welded in the upper rear corner for the atmospheric turbo’s drain fitting. 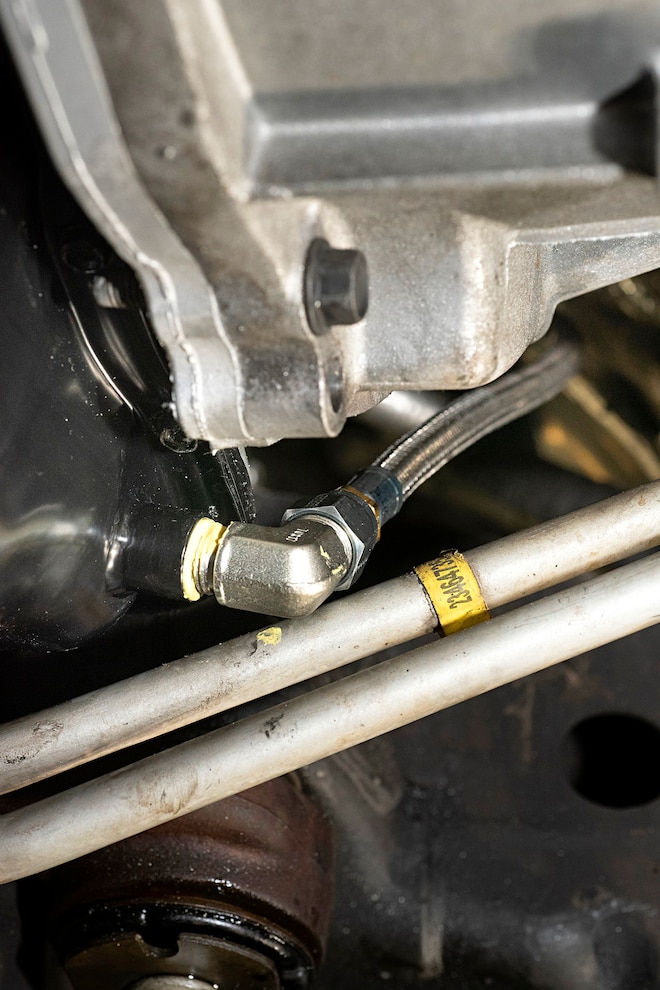 View Photo Gallery | 30 Photos
Photo 7/30   |   We install 90-degree 3/8-inch NPT x #4 JIC fitting in the WCFAB oil pan so the final position is about 2 o’clock. This sets it up to match the oil drain line from the S475 atmospheric turbo. If the oil pan is installed prior to threading the fitting in, the transmission lines will need to be disconnected and a small protruding flange on the Allison transmission trimmed off so the fitting can be installed. We also removed the factory downpipe and exhaust while under the truck. 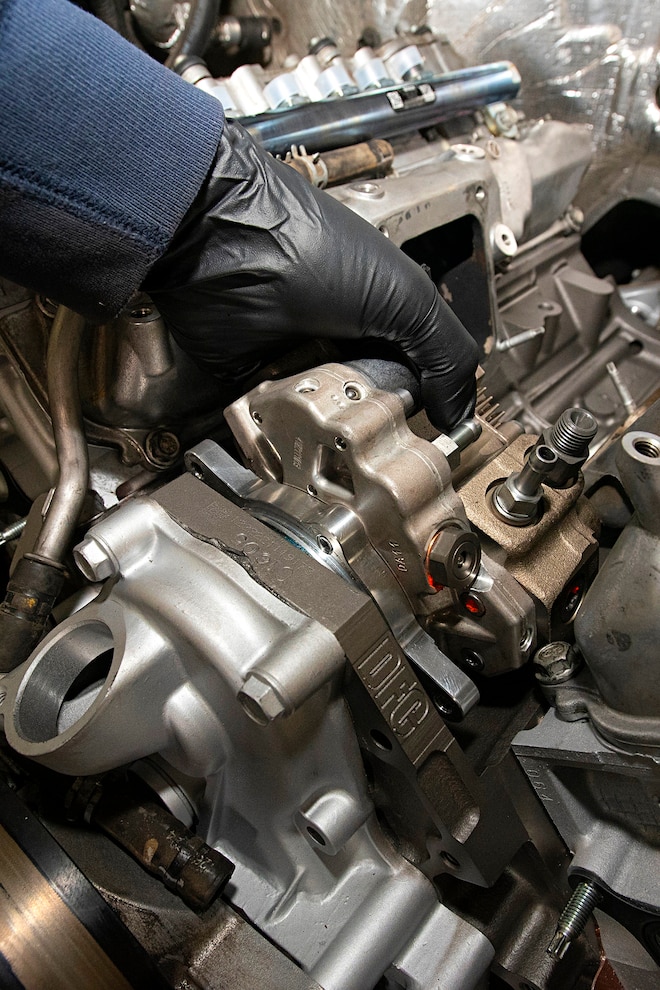 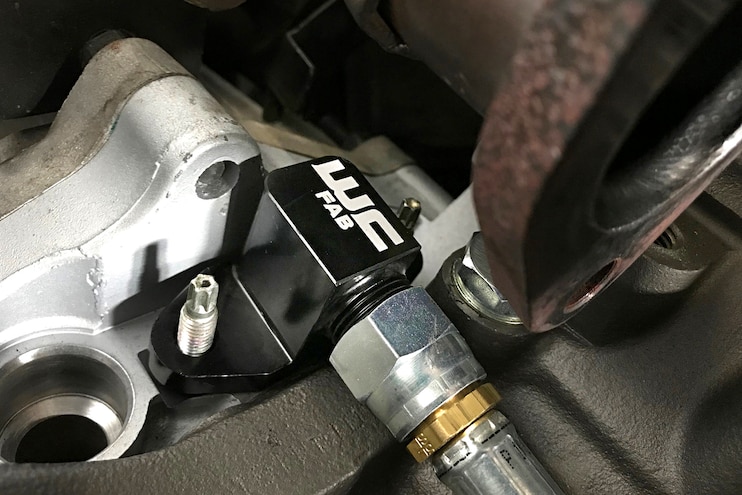 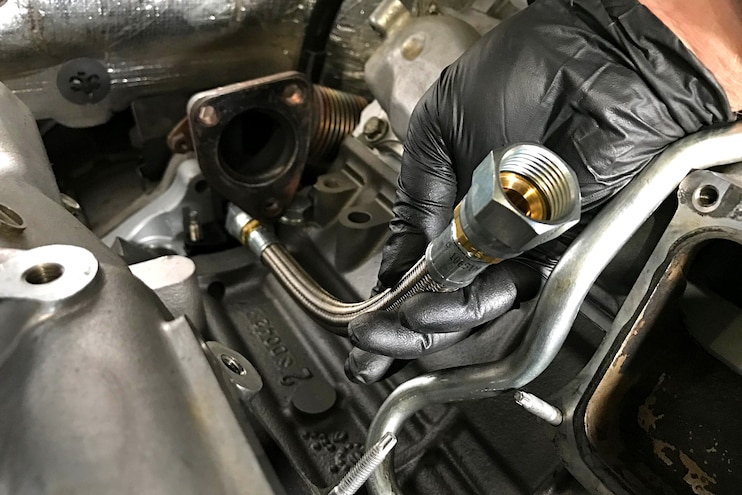 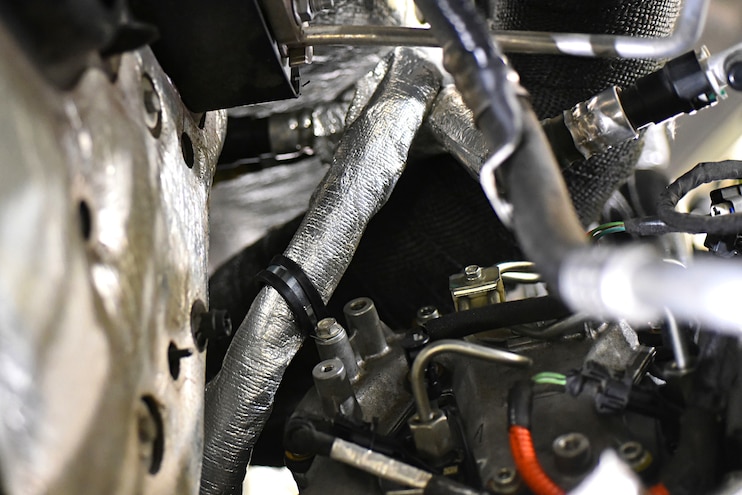 View Photo Gallery | 30 Photos
Photo 11/30   |   New heater hoses are re-routed around the primary turbo. Pro tip: Slide 1.25-inch heat shield over the hoses and attach them to tubes in the firewall before bolting in the turbo. 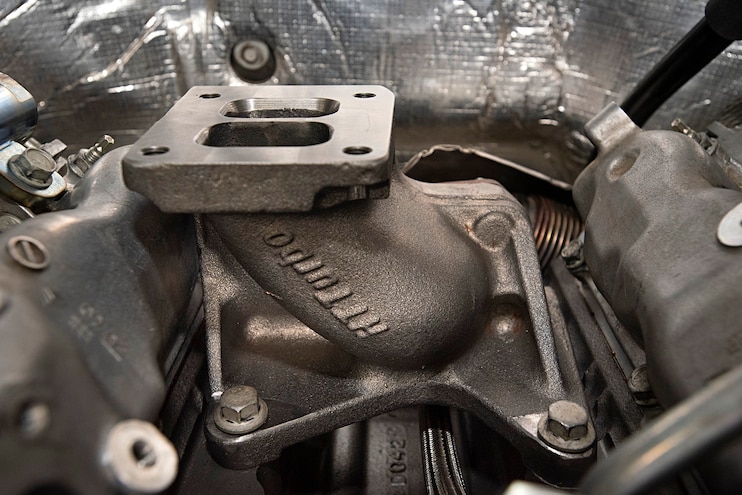 View Photo Gallery | 30 Photos
Photo 12/30   |   Eric places the injector feed lines in the valley before installing the WCFab turbo pedestal and up-pipes, which are connected to the stock exhaust manifolds. 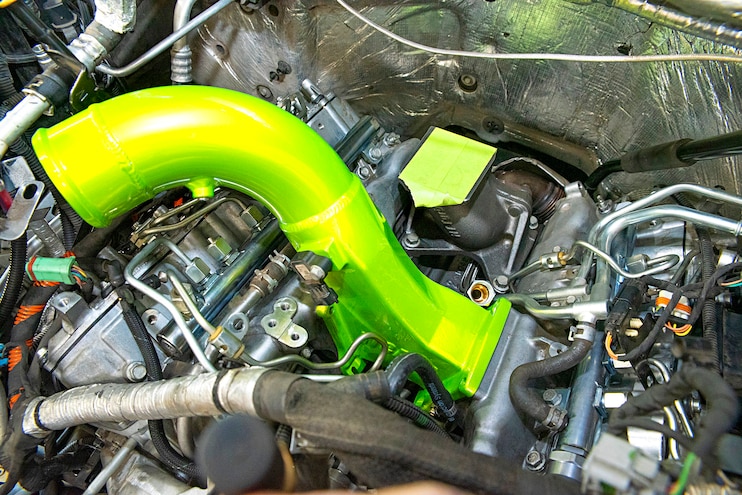 View Photo Gallery | 30 Photos
Photo 13/30   |   While the intake “Y” bridge bolts right in, the holes to mount it may require a little thread chasing (to remove powdercoat in the threads). 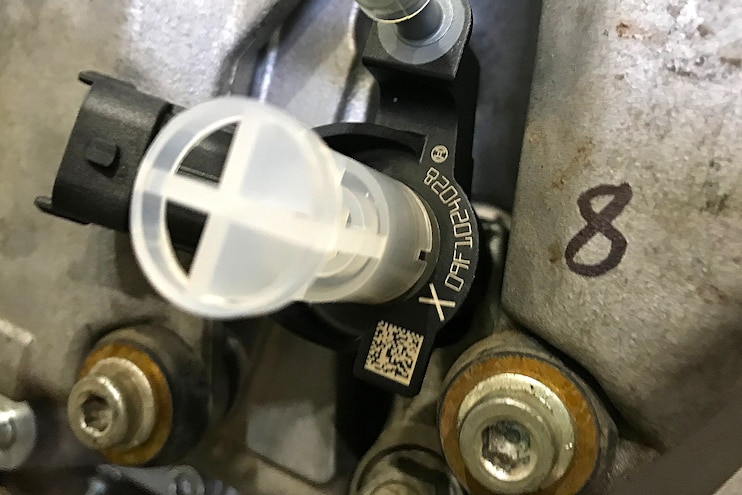 View Photo Gallery | 30 Photos
Photo 14/30   |   Another tip: Before going further, Eric notes the trim codes for the Dynomite Diesel Products 75hp, 30-percent-over injectors and uses a marker to number each cylinder. Taking photos with a cell phone makes recall easier when entering the trim codes into a scan tool. If the injectors’ trim codes are incorrect, the engine will idle rough. 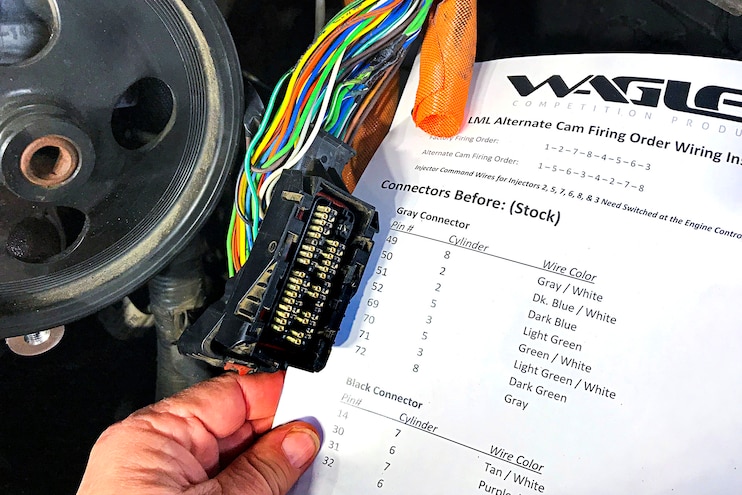 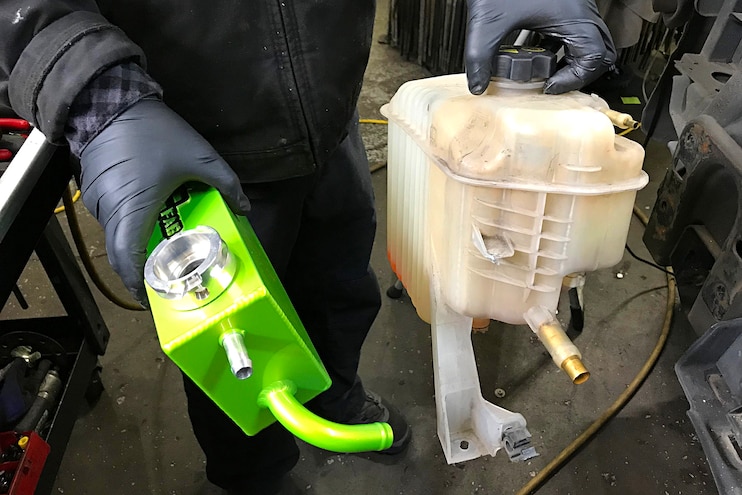 View Photo Gallery | 30 Photos
Photo 16/30   |   WCFab’s compound-turbo kit requires relocation of the passenger-side battery and battery tray, along with the removal of the stock overflow bottle and the inner firewall-support brace. Wehrli provides a new battery tray and aluminum coolant tank (with low-coolant sensor) that mounts where the battery was originally located. 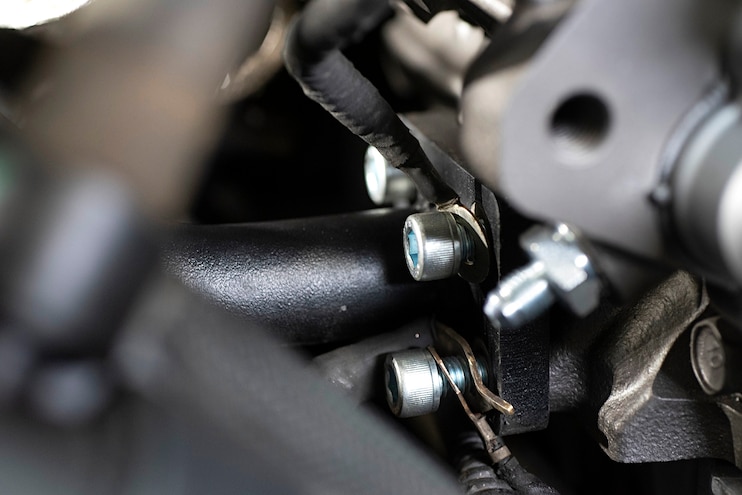 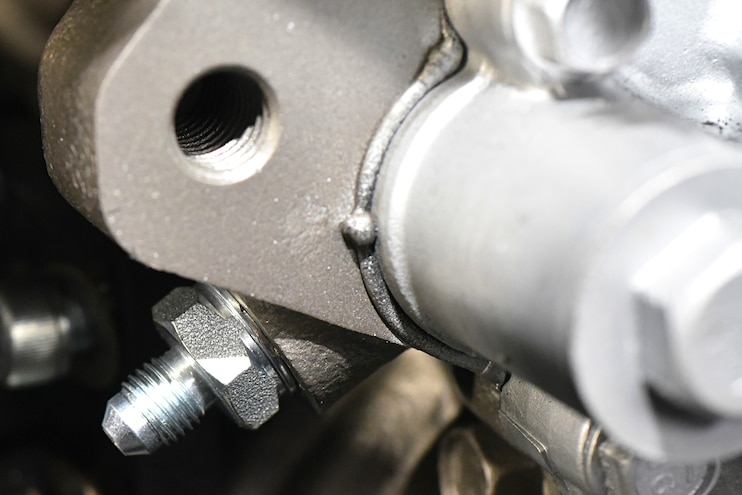 View Photo Gallery | 30 Photos
Photo 18/30   |   Eric removes the 19mm oil-galley plugs from both sides at the lower front of the engine block and replaces them with JIC oil-feed fittings and threads on the AN -4 braided stainless steel lines supplied with the kit. The shorter passenger-side hose feeds the BorgWarner S475 atmospheric turbo (routed up the outside of the pedestal) while the driver-side line routes to the high-pressure BorgWarner S364.5 SX-E ’charger. 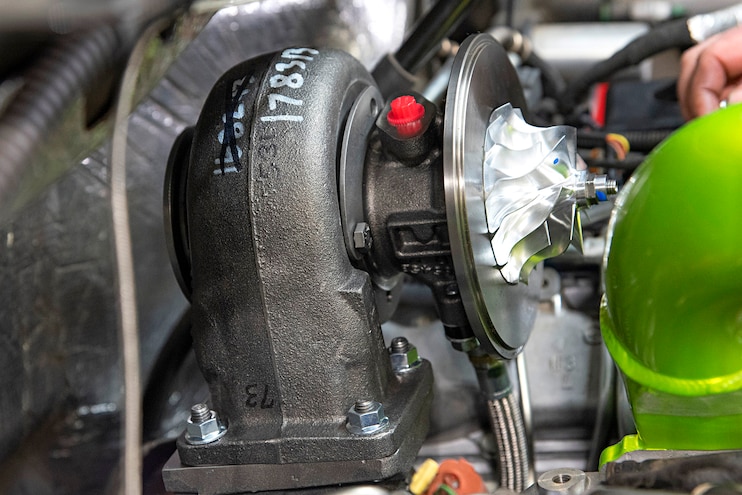 View Photo Gallery | 30 Photos
Photo 19/30   |   In order to access its mounting bolts, the S364.5 turbo must be disassembled before it is installed on the pedestal. The centersection, oil-drain hose, and the compressor cover are all bolted on. Note: The tasks require small hands and patience to get the lock plates and fasteners installed. 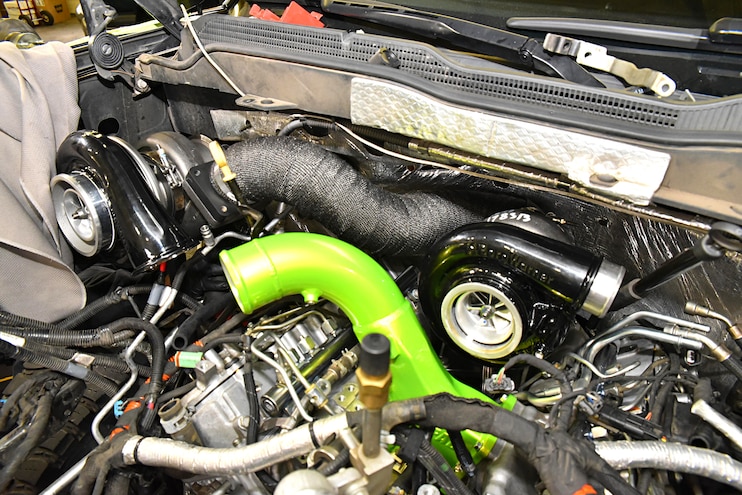 View Photo Gallery | 30 Photos
Photo 20/30   |   Eric wraps the 3.5-inch hot pipe with the supplied heat wrap and hose clamps and then loosely secures the atmospheric turbo to its stand. Leaving the S475 loose makes aligning the hot pipe to the T6 inlet easier. 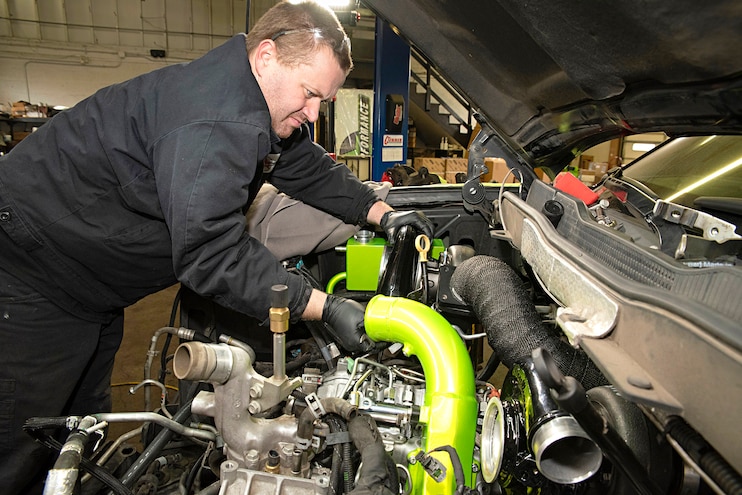 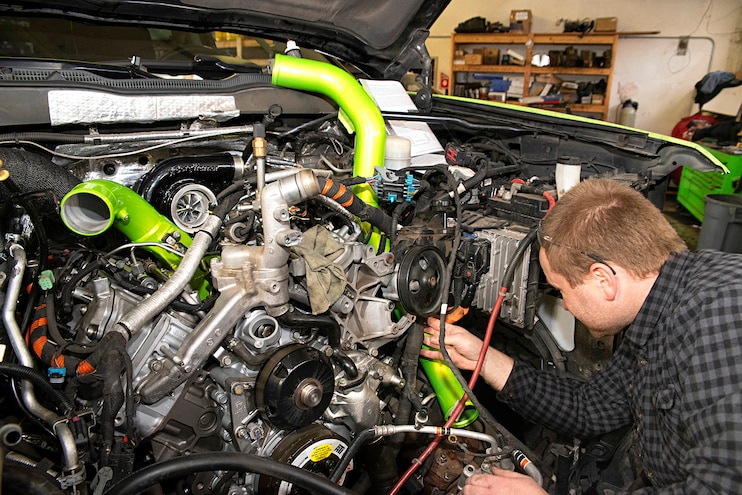 View Photo Gallery | 30 Photos
Photo 22/30   |   The power steering pump is lifted out of the way and the one-piece, TIG-welded cold-side intercooler pipe is fed from the top of the engine. 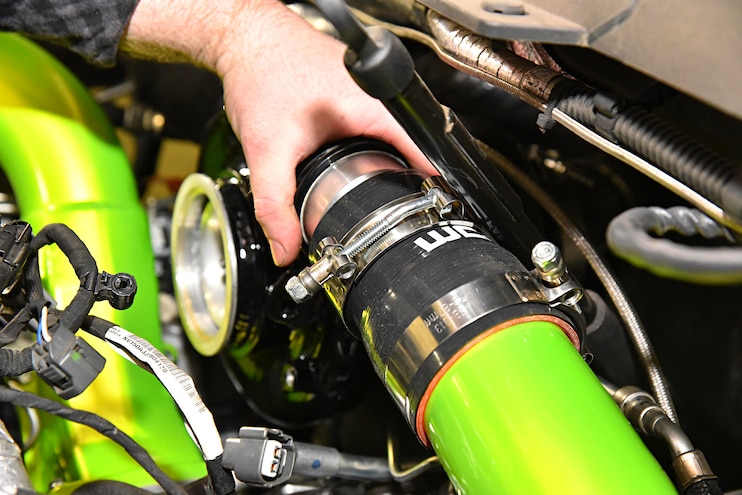 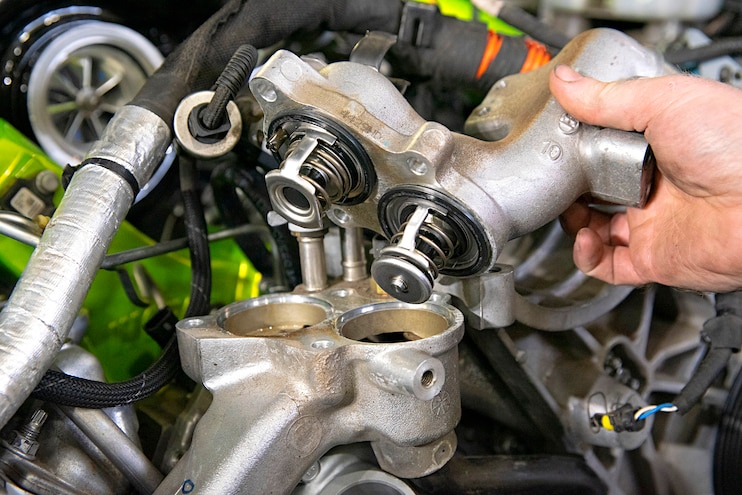 View Photo Gallery | 30 Photos
Photo 24/30   |   Pro Tip: Pull the old thermostats out and replace them with new ones while they are easily accessible. The stock rear thermostat is 180 degrees, the front 185. 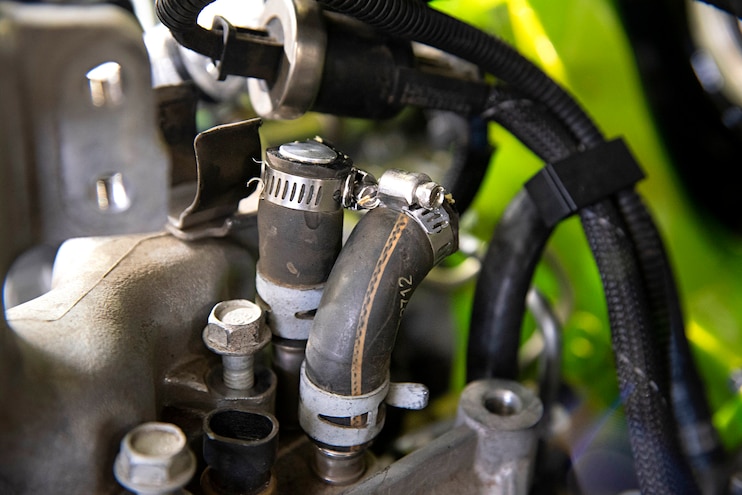 View Photo Gallery | 30 Photos
Photo 25/30   |   Several water hoses and lines are either rerouted or removed with the outlets plugged, because this “off-road/competition” compound-turbo conversion requires the removal of EGR-related components. 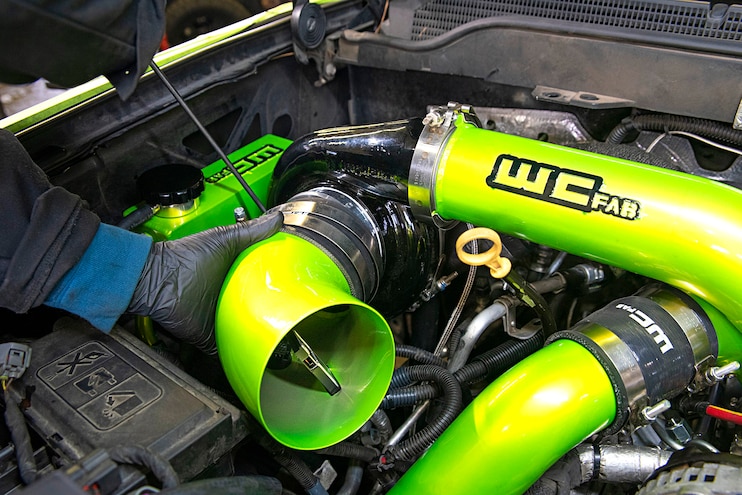 View Photo Gallery | 30 Photos
Photo 26/30   |   One of the last steps in this installation is removing the sensors from the stock air-filter intake horn and reinstalling them in the Wehrli piece. Make sure the sensors are placed in the same position as they were in the original intake. Note: Eric plugged the tapped hole in the Wehrli “Y” bridge because we are using the MAP sensor to monitor boost instead of installing a mechanical gauge. 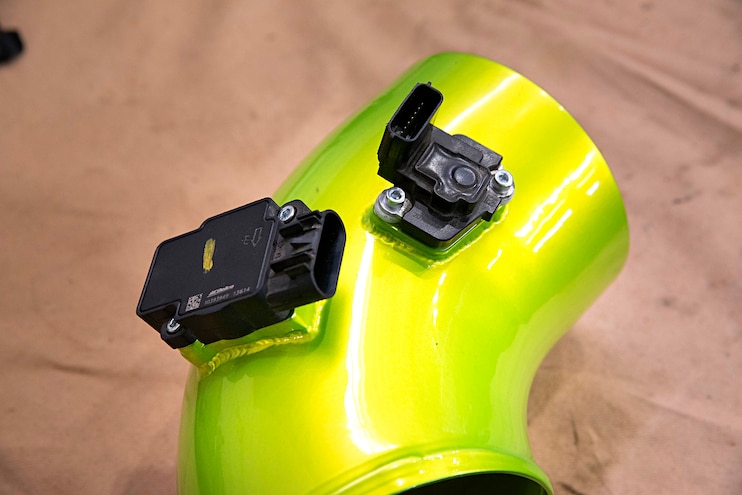 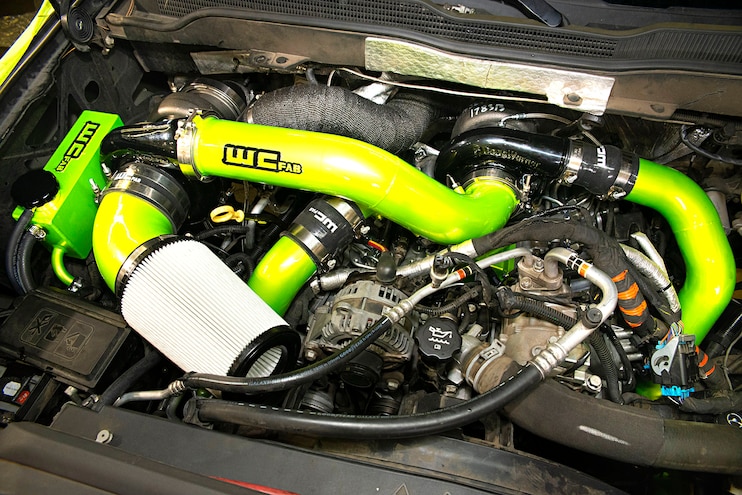 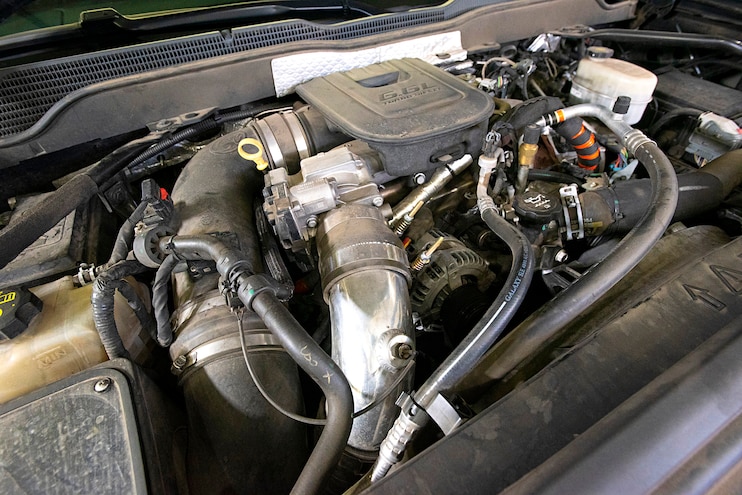 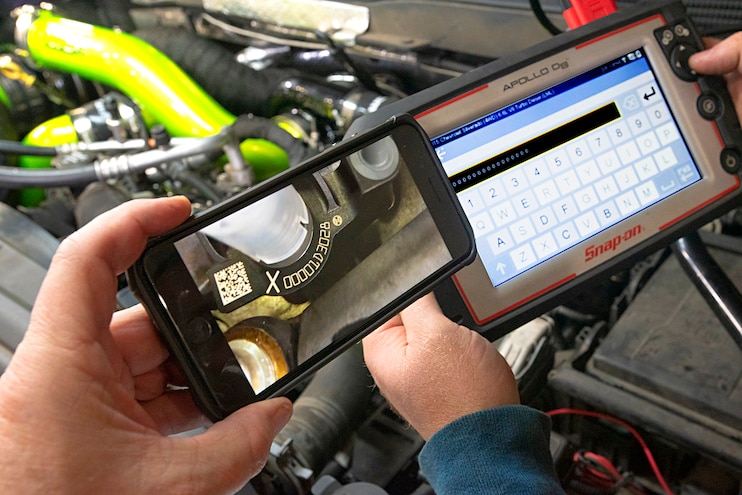