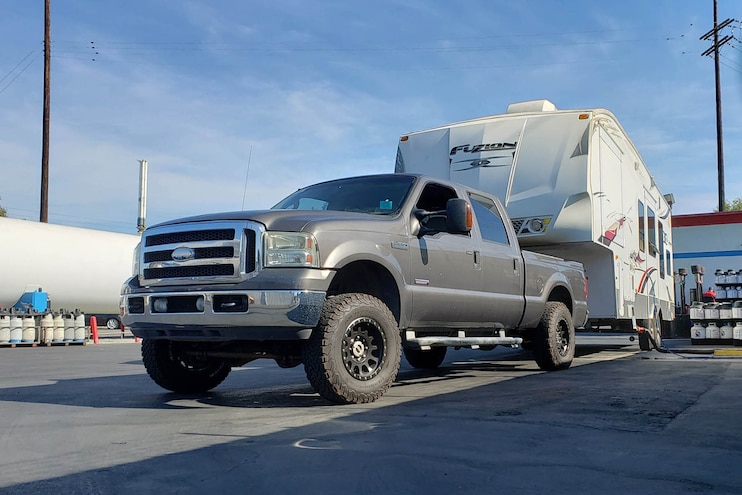 Diesel engines need two things to make power: air and fuel. We know that's grossly oversimplified, but it's true. If you increase the engine's ability to ingest air, you can add more fuel and thus make more power. On a diesel engine, that often means adding a different (or another) turbocharger. While there are lots of aftermarket turbos available for late-model diesels, there's something we find comforting about sticking with the original equipment manufacturer, and that's just what we did with our 2005 Ford F-350 Super Duty.

It may come as a surprise to some that Garrett (now going by the name Garrett: Advancing Motion) supplies Ford Motor Company and provided the original equipment turbocharger for the 7.3L, 6.0L, and 6.7L Power Stroke engines. What's more, the supplier also offers a performance drop-in replacement dubbed PowerMax. Currently, Garrett offers a PowerMax for the 7.3L and 6.0L Ford Power Stroke, along with the 2004 -to-2010 6.6L Duramax. For our application, we called up the folks at Summit Racing and ordered the GT3788VA PowerMax. Summit had the turbo in stock, and it was delivered to our door in two days for free, which is pretty tough to beat these days.

The GT3788VA retains the factory electronics and advanced variable nozzle turbine (AVNT) design, the mounting pedestal remains the same, and there are no intake or exhaust modifications necessary. The biggest improvement comes from compressor wheel inducer size, which increases from 58.0 mm to 63.5 mm. The turbine wheel also changes from a 13-blade design to just 10 blades, while remaining the same overall size. All this combines to create a turbocharger that looks no different from the outside but is capable of supporting up to 175 additional horsepower. In fact, in previous testing through our sister brand Diesel Power, we found the turbo alone provided an additional 50 hp to the wheels.

View Photo Gallery | 21 Photos
Photo 2/21   |   Photo Credit: Adam Leonhardt The recipient of our Garrett PowerMax from Summit Racing was this rather unassuming but hard-working 2005 Ford F-250 Super Duty. With nearly 200,000 miles on the factory boost maker, it was time to put the original unit out to pasture. And before you ask, as any good 6.0L Power Stroke does, this truck already sports ARP head studs, an upgraded oil cooler, and all the supporting modifications necessary to keep it running reliably.

Now, we know you're getting scared because this is a 6.0L we're working on. And yes, this truck already has ARP head studs installed along with an upgraded oil cooler. It also has larger exhaust up- and downpipes and larger charge-air pipes. The truck has also been custom-tuned to account for the turbocharger and other modifications. So yes, the PowerMax turbo will work on a fully stock 6.0L Power Stroke, however, we're all aware of the special treatment they require.

Our 2005 F-350 Super Duty was the perfect candidate for the PowerMax upgrade, as after nearly 200,000 miles of faithful service the factory turbo was starting to show its age, mostly in control of the variable-geometry vanes. Power improvement was immediately noticeable once the PowerMax was installed. The truck had a noticeable new pep in its step with brisk acceleration and almost no discernable lag. Towing a 14,000-pound trailer was made easier by the bigger boost maker, and exhaust gas temperature (EGT) has remained the same or lower than with the factory turbo. The only notable downside we noticed was an exponential increase in turbo whistle, though for 6.0L owners this is hardly a downside at all.

The install took us just three hours to complete, working in the driveway with basic handtools and a fair bit of knowledge and experience. If it's your first time, block out a day on the calendar to complete the task. Overall, we're extremely pleased with the new lease on life the PowerMax has given our truck and recommend it for all 6.0L owners. 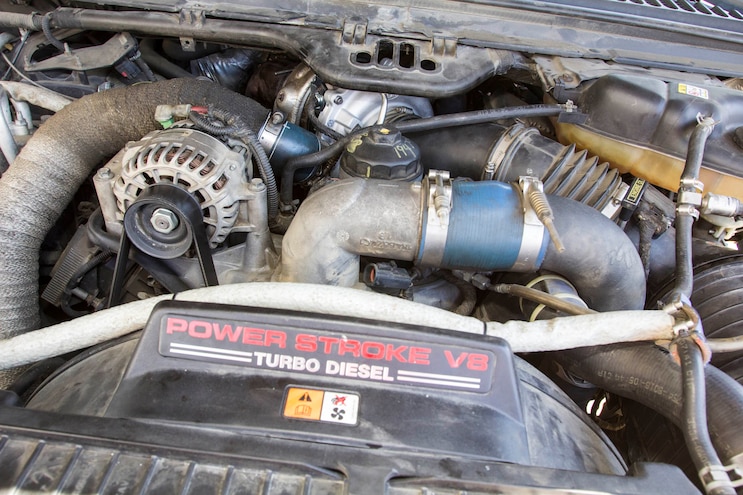 View Photo Gallery | 21 Photos
Photo 3/21   |   Swapping the turbocharger on a 6.0L Power Stroke is a relatively straightforward task. As with most V-shaped diesel engines, the turbo is located at the rear of the lifter valley. Thankfully, in this application, the turbo isn't deep enough under the cowl to cause any issues. 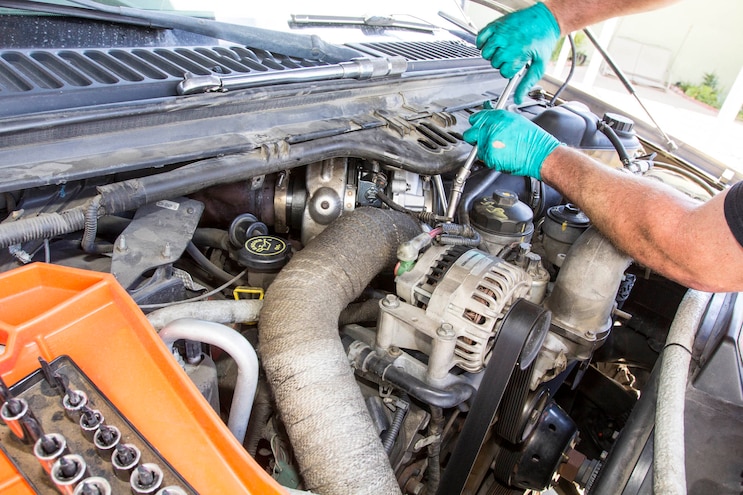 View Photo Gallery | 21 Photos
Photo 4/21   |   Getting to the turbo is kind of a choose-your-own adventure, in that there's no right or wrong order of part removal to get to it. We started the swap by removing the hot-side intercooler pipe from the turbo's compressor outlet. 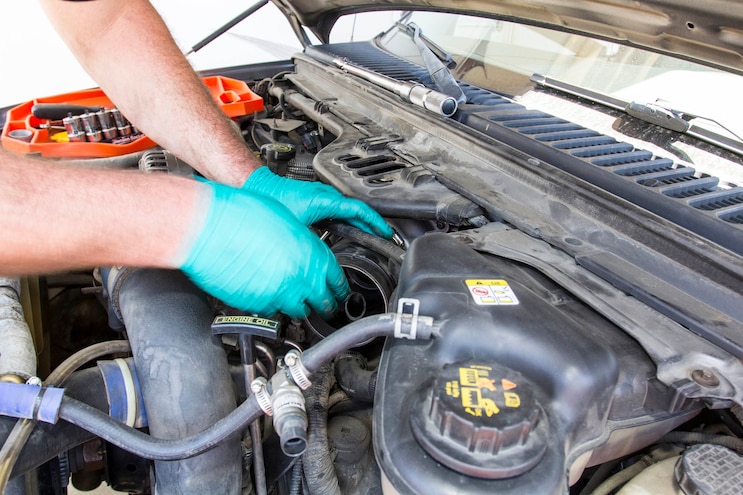 View Photo Gallery | 21 Photos
Photo 5/21   |   Next, we removed the factory airbox and intake piping from the inlet side of the turbo compressor housing. Yes, this truck still utilizes the factory airbox, as the stock Donaldson filter is one of the best on the market. The restricted airflow is worth the reliability to the truck's owner. 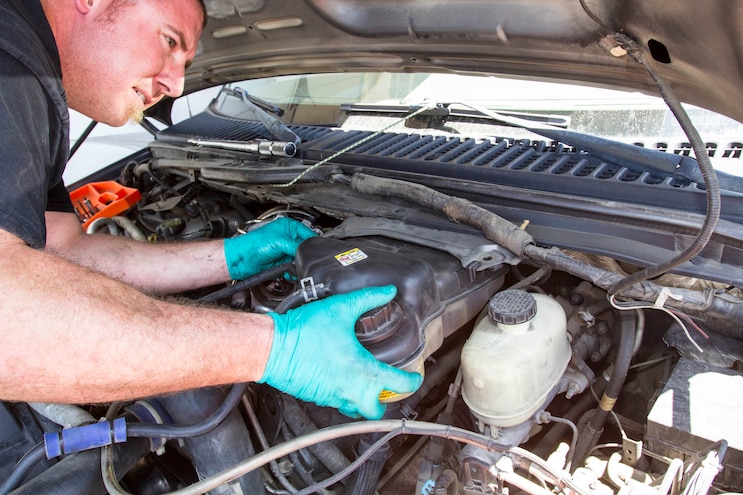 View Photo Gallery | 21 Photos
Photo 6/21   |   The final pieces blocking our view of the turbocharger are a wire chase and the coolant degas bottle, both of which are attached to the cowl. We carefully removed the plastic clips holding the wire chase in place and secured it out of the way with a bungee cord. After removing the two bolts holding the degas bottle in place, it's gently placed out of the way. There's no need to drain any coolant for this job. 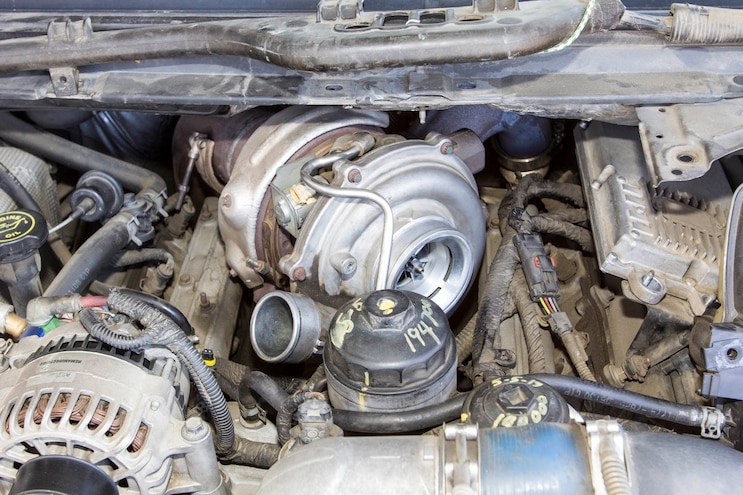 View Photo Gallery | 21 Photos
Photo 7/21   |   After the factory turbo is rendered accessible, there are a few more steps that need to be taken before it can be removed from the truck. There is an oil feed line that routes to the top of the turbocharger's centersection, along with a plug for the variable-geometry vane control. Around back, the V-band clamps for the exhaust up- and downpipes also need to be removed. Finally, there are three bolts that attach the turbo to the engine block. 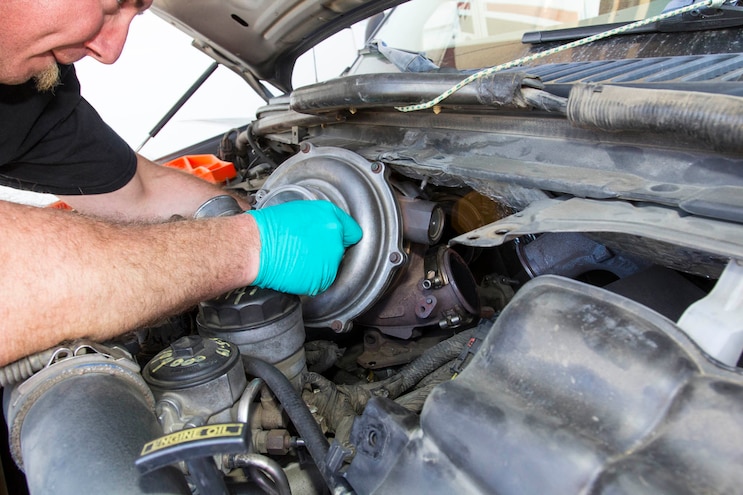 View Photo Gallery | 21 Photos
Photo 8/21   |   Once free, the turbo can be lifted up and out of its position in the valley. It's a tight fit, and we've learned it's easiest to come out toward the passenger side of the engine bay. If it seems difficult at first, give the charger a slight rotation and wiggle—and it'll come right out. 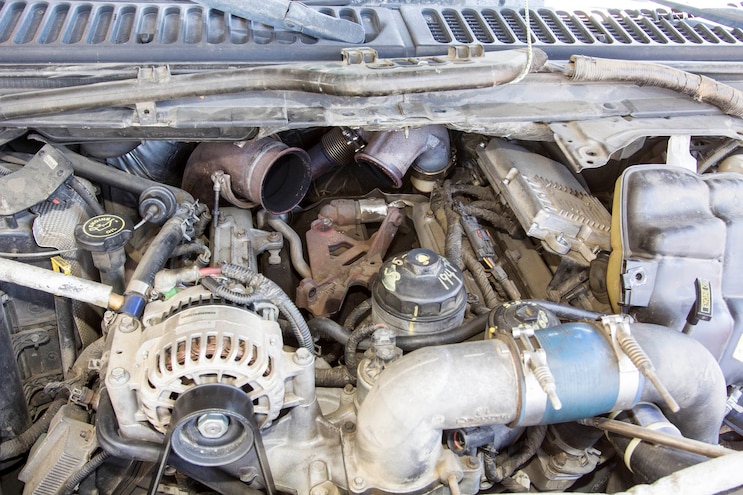 View Photo Gallery | 21 Photos
Photo 9/21   |   With the turbo removed, we get the clearest picture yet of how everything is arranged under the hood. Believe it or not, the 6.0L Power Stroke is one of the easier diesel engines to work on. If you don't believe us, go pop the hood on a newer 6.7L truck 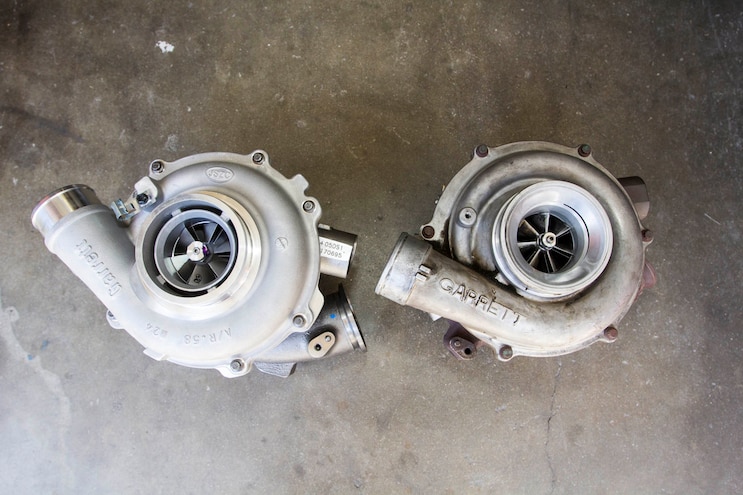 View Photo Gallery | 21 Photos
Photo 10/21   |   The PowerMax (left) is an improved version of the factory Garrett turbocharger used on the 6.0L Power Stroke. With drop-in turbo replacements becoming all the rage these days, it's easy to forget Garrett has been offering exactly that through its aftermarket division for more than a decade. One of the biggest differences, and driver of performance, is the increase in compressor wheel inducer size from 58.0 mm to 63.5 mm. 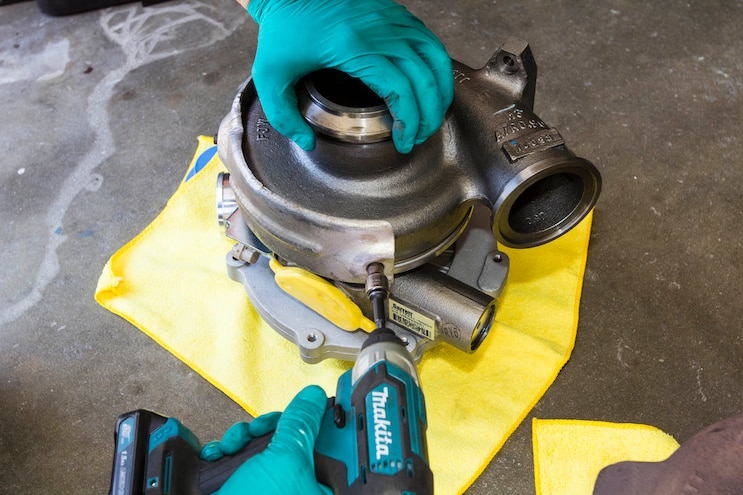 View Photo Gallery | 21 Photos
Photo 11/21   |   As it's a direct drop-in replacement, the only part from the old factory turbo that needed to be swapped over to the PowerMax was a heat shield. After snugging with an electric driver, the bolts were torqued to spec. 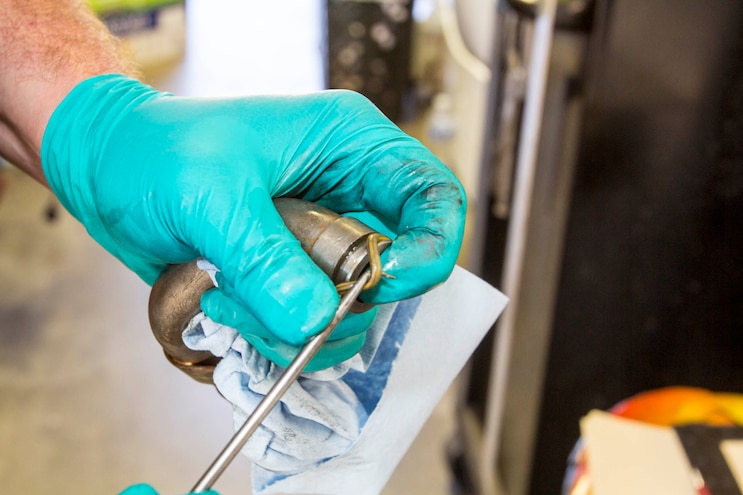 View Photo Gallery | 21 Photos
Photo 12/21   |   When replacing a 6.0L Power Stroke turbo, there are two things that should be replaced. One is the oil return O-ring, and the other is a gasket on the oil feed line. Both can be found online or at the local Ford dealer. They are important to replace, however, as the last thing you need is an oil leak. 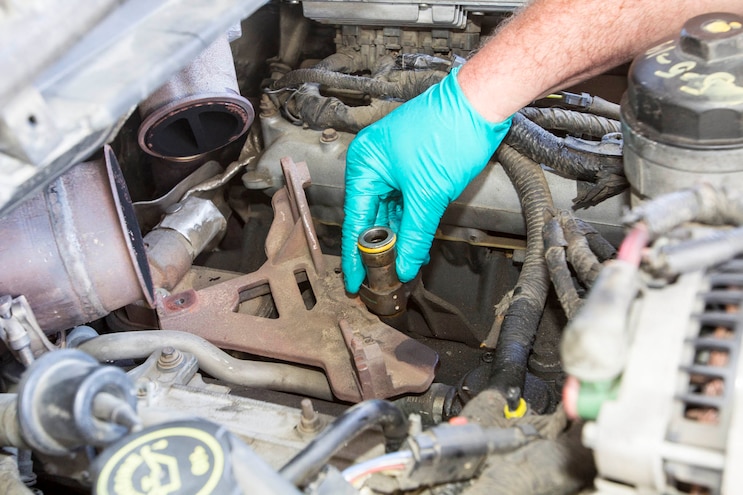 View Photo Gallery | 21 Photos
Photo 13/21   |   The oil return tube is press-fit and is held in place by the turbocharger. Before installing the new turbo, the drain tube was gently put back in place with the new O-rings. Care should be taken when installing the turbo to not damage the O-rings or displace the drain tube. 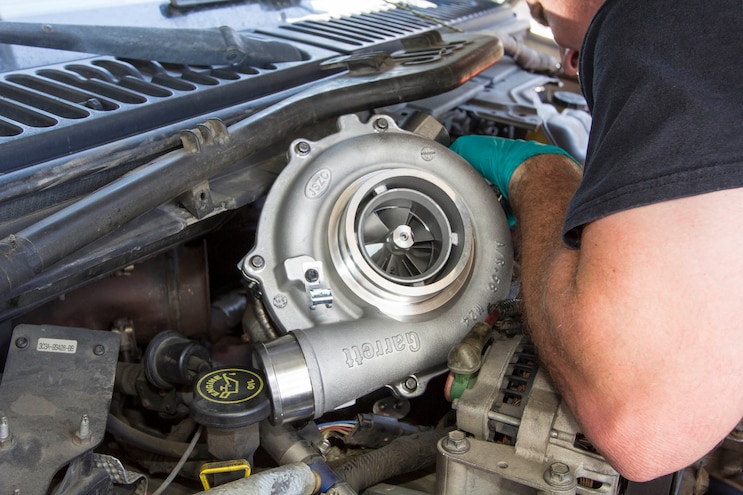 View Photo Gallery | 21 Photos
Photo 14/21   |   Working in reverse of disassembly, the new PowerMax turbo was lowered into place through the same opening. It's possible to come in from the driver side of the engine bay, but we still find the passenger side to be less cluttered. 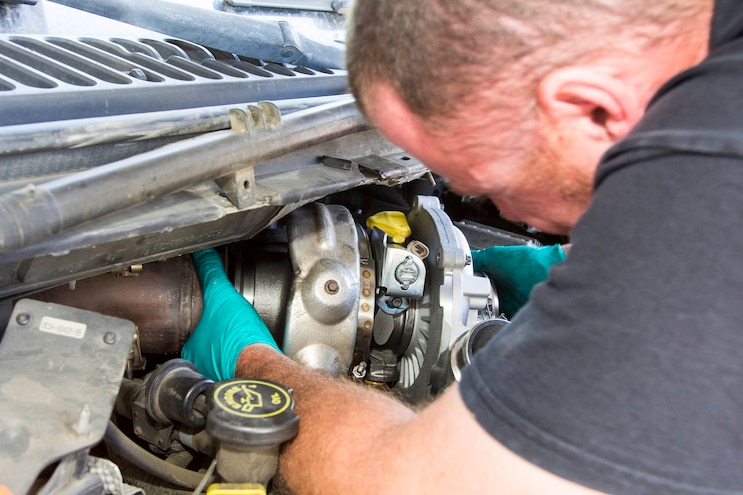 View Photo Gallery | 21 Photos
Photo 15/21   |   You'll know everything is seated properly when the exhaust up- and downpipes align. Since the PowerMax is a direct drop-in replacement, no exhaust or intake modifications are necessary. 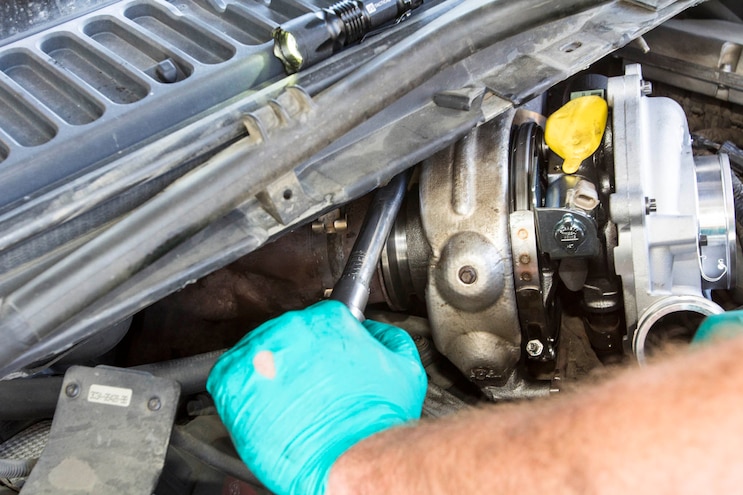 View Photo Gallery | 21 Photos
Photo 16/21   |   With everything lined up, we began the task of reinstalling the hardware removed from the factory turbo. Once snug, all bolts are torqued to spec, with a small 3/8-inch drive torque wrench coming in very handy. 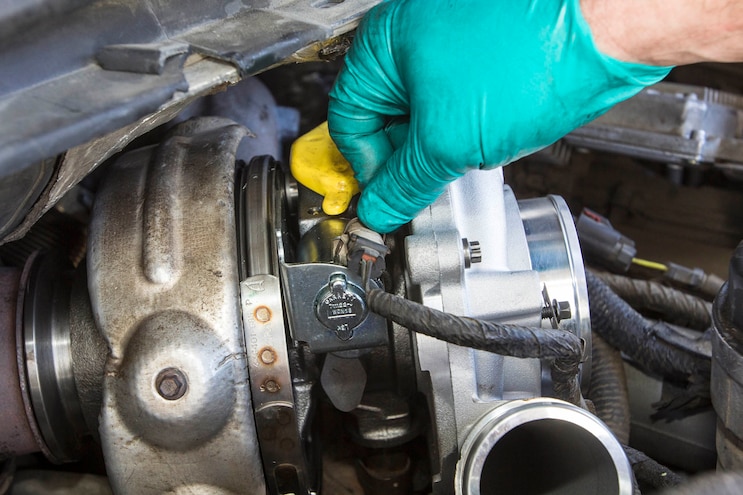 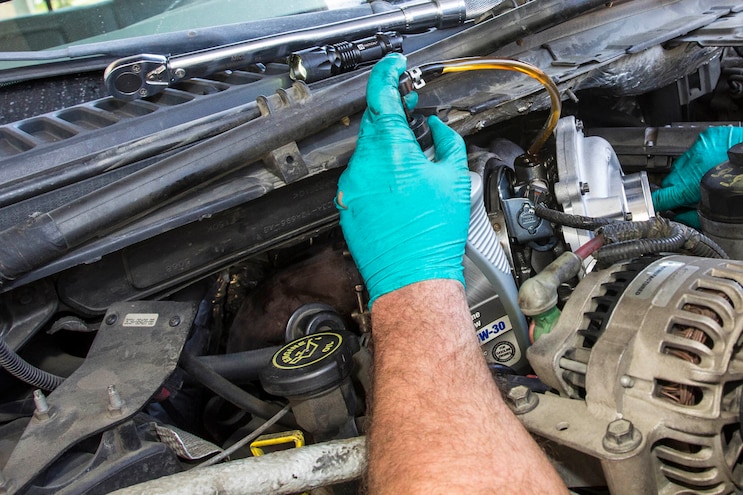 View Photo Gallery | 21 Photos
Photo 18/21   |   Because the turbo is new, it is important to lube the cartridge bearings prior to firing up the engine for the first time. Using a simple hand pump, we fed oil into the turbo through the oil inlet while rotating the compressor wheel. It doesn't take a lot but is important not to forget. 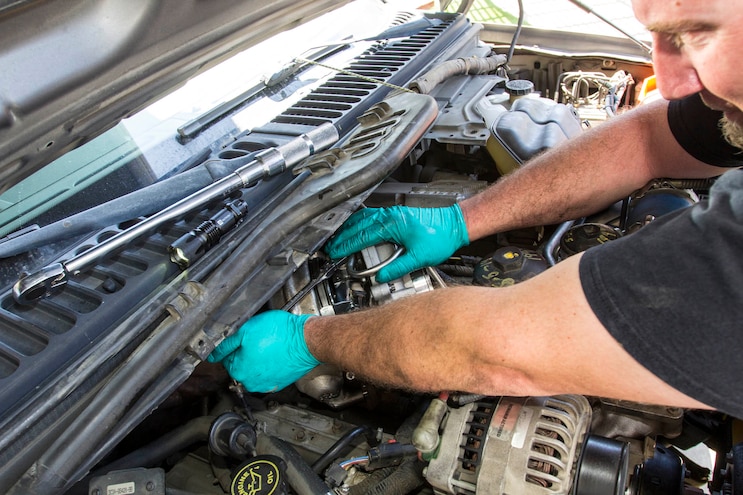 View Photo Gallery | 21 Photos
Photo 19/21   |   Also important not to forget is the oil feed line and the new gasket mentioned prior. Oil provides both lubrication and cooling for the Garrett turbo, so keeping a consistent flow through the center core and bearings is critical. 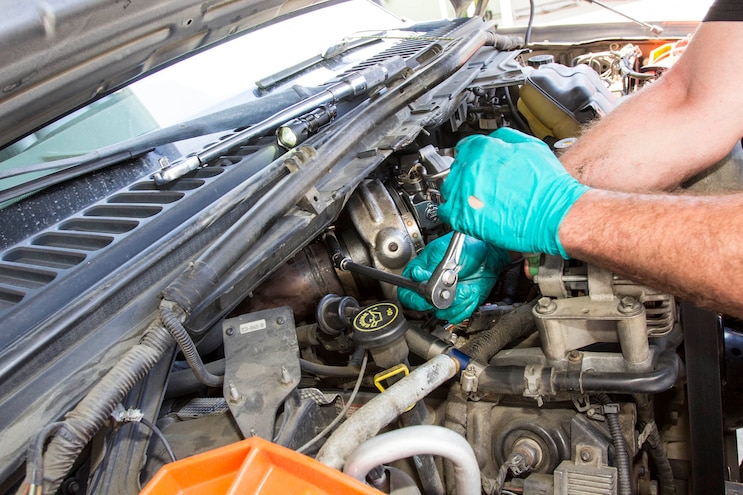 View Photo Gallery | 21 Photos
Photo 20/21   |   We wrapped up the job by tightening the exhaust V-band clamp followed by all the accessories removed previously in reverse order. The hot-side intercooler pipe, air intake, wire chase, and degas bottle were all bolted back into position.

Sticky Vanes
In case you're not familiar with how the Garrett variable-geometry turbocharger works on a 6.0L Power Stroke, here's a quick primer to get you up to speed. Inside the exhaust housing, there are nine movable, aerodynamically designed vanes. These vanes are linked with a steel plate and move in unison, controlled by an electro-hydraulic actuator (electric actuator and oil pressure). These vanes are used to alter the effective aspect ratio of the exhaust housing. Variable-geometry turbochargers produce very little lag off idle and are highly efficient at higher speeds. The downside is that over time the moving parts can wear out and exhaust soot can cause the vanes to stick in one position or not move smoothly, affecting performance of both the turbocharger and the engine. Ford 6.0L Power Stroke turbos are especially susceptible to this and should have the exhaust housings removed and cleaned whenever the turbo is removed from the engine. Despite several cleanings in its lifetime, our 200,000-mile turbo finally succumbed to its age, though not through total failure but rather a diminished ability to adjust the vanes properly. 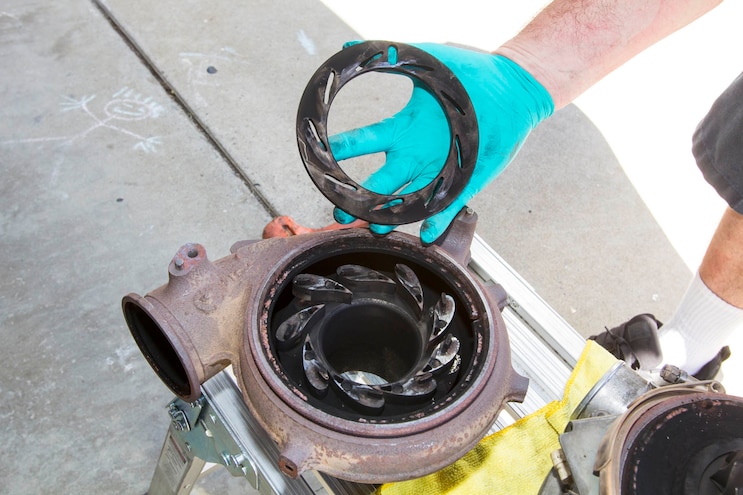