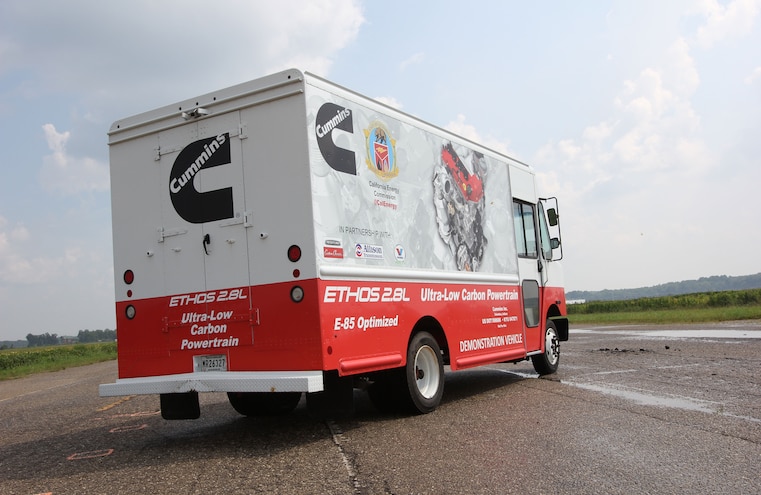 Since its inception, Cummins has been a leader in engine technology and innovation. The most talked-about program in recent years is the ATLAS (Advanced Technology Light Automotive Systems) project. ATLAS was a collaboration between Cummins and the U.S. Department of Energy that targeted a Tier 2 Bin 2 emissions-compliant diesel engine for use in a light-duty pickup. The engine chosen for this project was the ISF 2.8L inline four-cylinder. By the end of the project, the ATLAS engine had shed 118 pounds from the original ISF and had gained 50 hp. Through a partnership with Nissan, we all know the ATLAS engine as being the first Cummins prototype installed in a Titan pickup.
However, after the ATLAS program was well underway, another similar program was just getting started. Partnered with the California Energy Commission, Cummins set out to develop an engine that ran off clean-burning E85 (a blend of 85 percent ethanol and 15 percent gasoline) for medium-duty vehicles. The program was set in motion in 2011 and originally targeted a reduction in engine displacement from 6.7L to 4.5L, along with the addition of start/stop technology. In 2012, Cummins requested an extension from the CEC to accommodate their desire to reduce displacement even further to 2.8L, matching that of the ATLAS. 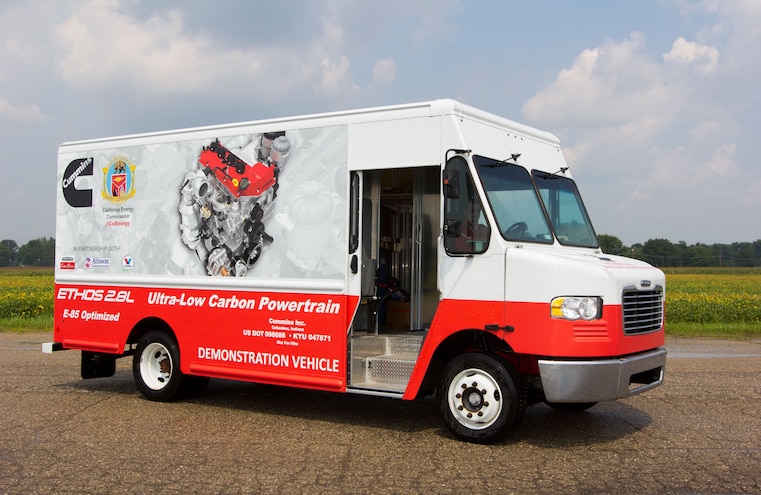 View Photo Gallery | 6 Photos
Photo 2/6   |   The ETHOS engine was installed a Freightliner Custom Chassis walk-in van. This demonstrator vehicle logged more than 1,000 miles loaded nearly to capacity.
The ETHOS 2.8L Engine
In order to take full advantage of the combustion attributes and potential of E85, Cummins designed the engine to run at diesel-like cylinder pressures, which is far greater than that of a normal gasoline or E85-capable engine. Advanced spark ignition and turbocharging technology enable the four-cylinder to churn out up to 250 hp and 450 lb-ft of torque, which is equivalent to that of gas and diesel engines with nearly twice the displacement. 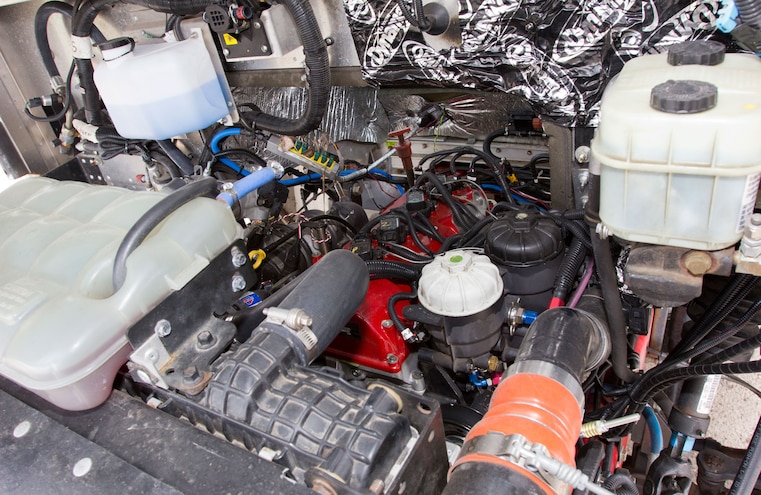 View Photo Gallery | 6 Photos
Photo 3/6   |   The 2.8L inline four-cylinder engine replaced a much larger ISB 6.7L inline six-cylinder Cummins diesel engine.
Based loosely off of the ATLAS diesel engine, the ETHOS is designed to run on only E85 and is not capable of burning gasoline. The 2.8L four-cylinder utilizes an aluminum block with strategic iron inserts to increase strength. Air is fed to the cylinders through a wastegated turbocharger and an aluminum cylinder head with four valves per cylinder and dual overhead camshafts. Dry weight clocks in at 490 pounds, which is a good bit heavier than its ATLAS counterpart.
To further reduce fuel consumption and emissions, the ETHOS engine incorporates an integrated stop/start system. Like other vehicles on the road with this technology, when the system is activated, the engine shuts down if the vehicle comes to a complete stop and the brake pedal remains depressed. As the driver’s foot is lifted from the brake, the system automatically restarts the engine, allowing seamless acceleration from a standstill. 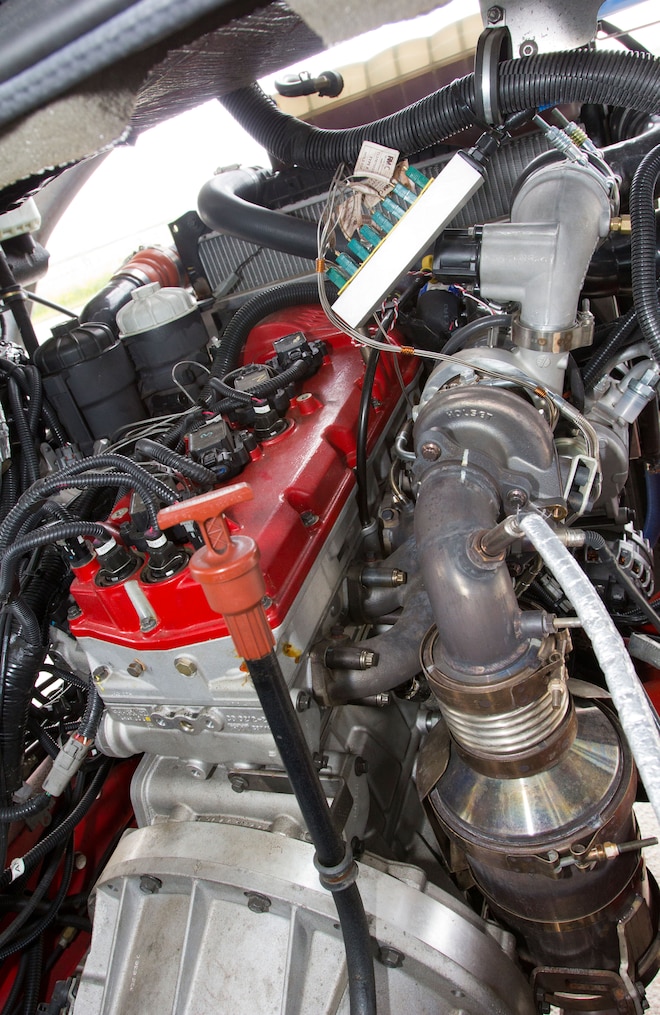 View Photo Gallery | 6 Photos
Photo 4/6   |   Pay no attention to the mess of test and data acquisition equipment; a production version would have a much more sterile engine bay.
Real World Testing
While the ETHOS project looked good on paper, the only way to truly prove the concept was to install the engine into a vehicle and run it. Cummins partnered with legendary truck builder Freightliner to retrofit a medium-duty box truck with the ETHOS engine. A specially tuned 2000 Series Allison automatic transmission was mated to the four-cylinder to ensure a smooth operation. To simulate accurate driving conditions, the Freightliner was loaded down to a total weight of 14,000 pounds, including vehicle and cargo. Over the course of 2 1/2 years, more than 1,000 miles and 1,500 hours of operation have been accumulated on the ETHOS 2.8L. The data acquired proved that the technology is capable of far exceeding the project’s initial goal of a 50 percent reduction in CO2 emissions. 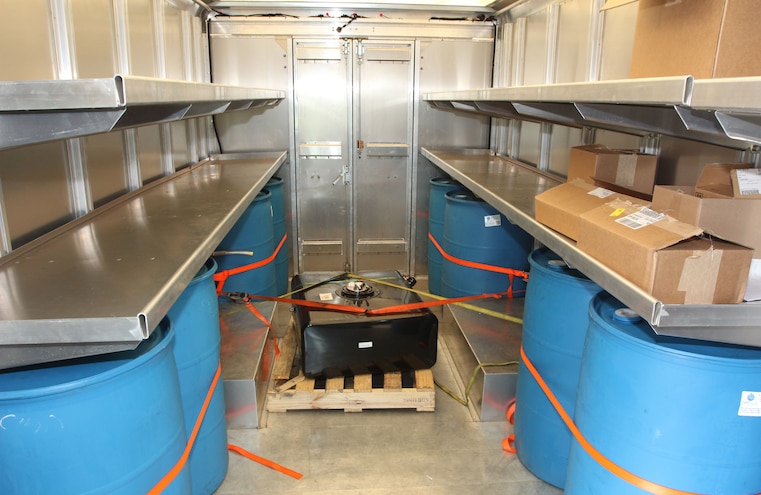 View Photo Gallery | 6 Photos
Photo 5/6   |   Drums were filled with water and strapped into the back of the vehicle to simulate a typical load that might be found in a parcel delivery truck.
Behind The Wheel
On a recent visit to Columbus, Indiana, we managed to talk our way into the driver seat of this one-off commercial vehicle. Under close supervision (and on a private test track), we were allowed to experience the ETHOS engine in action. Having driven many different medium-duty trucks in the past, we were truly amazed at the power and drivability that this tiny four-cylinder produced. Never once did it leave us yearning for more. The truck accelerated quickly off the line and cruised at highway speed with ease. If ethanol production ever becomes mainstream, we can see this technology becoming the way of the future. 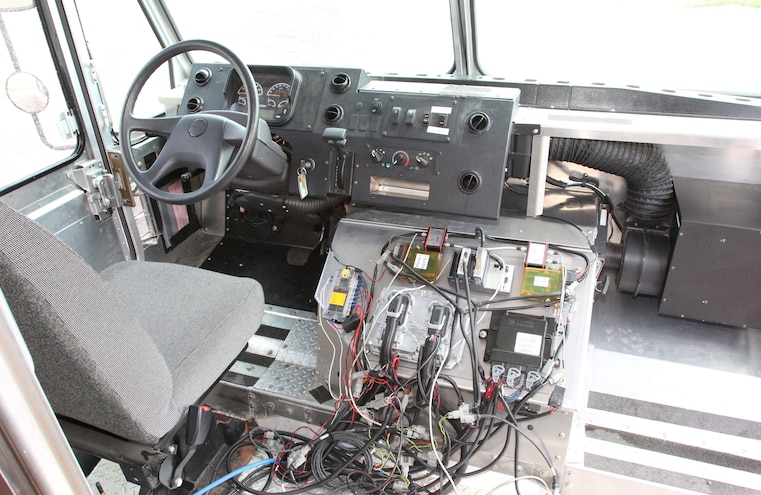