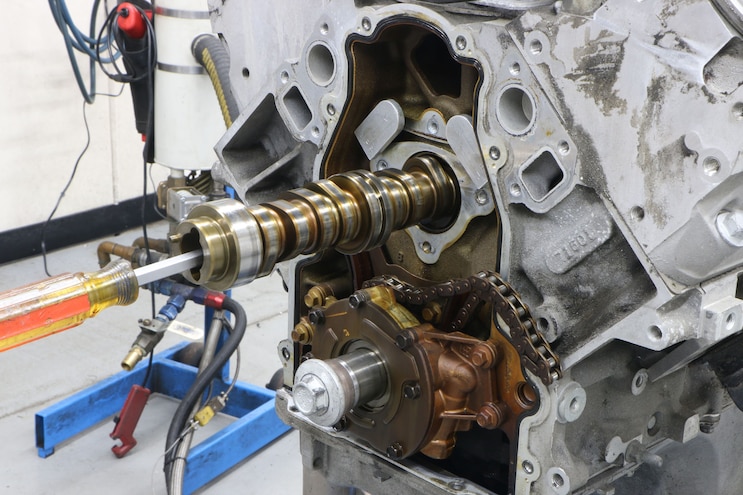 There it was, an honest-to-goodness, aluminum L92 engine. Don't get us wrong, we love every single junkyard 5.3L LM7, but they are usually ratty, greasy, and full of rodent droppings. Yes, you heard us right, mice and rats often leave behind evidence that the engine bay was indeed their playground, especially after an engine has been lingering in the yard for some time.

The iron-block LM7s have become the de facto LS swap engine, thanks mostly to their cost and availability. GM made thousands of these base engines, and wrecking yards are full of them. What wrecking yards are definitely not full of are alloy-block LS engines. Sure, we understand the lack of original 5.7L LS1s; it was short-lived and made in limited numbers.

For the uninitiated, the L92 features the very desirable aluminum block (at least for weight savings); high-flow, rectangular port heads; and a full 6.2 liters of displacement. Only the 7.0L LS7 offers more displacement, but good luck ever finding one of those at a wrecking yard. In addition to ample displacement, the alloy block, and high-flow head gear, the L92 also offered variable valve timing (VVT) and a fancy drive-by-wire throttle body. These last two are important to mention, as we ditched both to simplify our dyno testing. The stock exhaust manifolds were replaced by a set of long-tube headers, but the dyno exhaust system was run with both of our cam choices.

Thanks to the combination of displacement; 4.065-inch bore size; and high-flow, rectangular port heads, the L92 was in a position to respond even more to revised cam timing than your typical (and smaller) 4.8L or 5.3L. Heck, even the 6.0L LQ4 and LQ9 didn't offer the extra bore size and head flow of the L92, making the L92 primed and ready for a healthy cam profile. 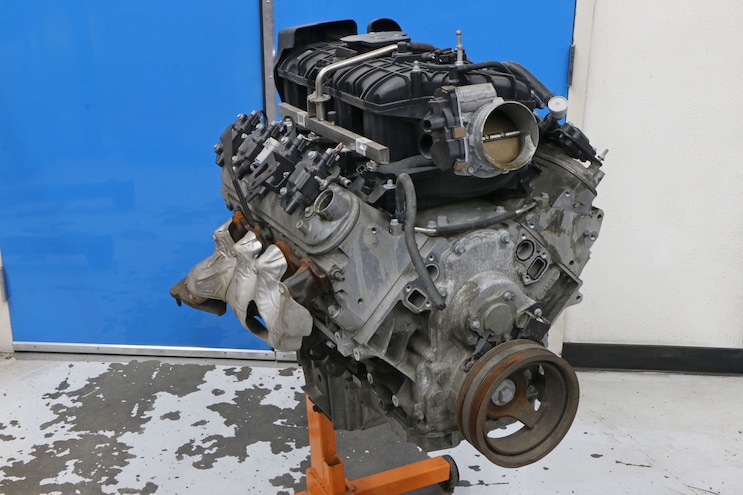 View Photo Gallery | 23 Photos
Photo 2/23   |   Pulled from a Cadillac, the 6.2L L92 featured an aluminum block, rectangular port heads, and a matching (meaning efficient) intake. Testing has shown the truck intake to be every bit as powerful as the low-profile LS3 intake.

Before we installed such a cam, we needed to establish a baseline. Because we were running an aftermarket Holley ECU, we could not control the VVT. Although we would certainly like to have the benefits offered by the VVT, most enthusiasts, especially those opting for a cam upgrade, simply ditch it in favor of a conventional cam. Knowing this, we elected to replace the VVT cam and mechanism with a simple (fixed) LQ4 cam. This wasn't an exact replacement power-wise for the VVT cam, but it would nonetheless give us a starting point to measure the gains offered by a cam upgrade. Equipped with the LQ4 cam and run with 1 7/8-inch headers, the L92 produced peak numbers of 445 hp at 5,600 rpm and 460 lb-ft of torque at 4,600 rpm.

Cam swaps on an LS engine have become a time-honored tradition, and for good reason. Because the LS family was blessed with basically everything else, meaning a good intake design and plenty of head flow, the only thing missing in the combination was cam timing. Add a cam to almost, any LS and you immediately look like a hero, especially when you get aggressive on the cam timing. The only limiting factor in terms of cam timing is the available piston-to-valve clearance. Unfortunately, the factory pistons featured no valve reliefs. 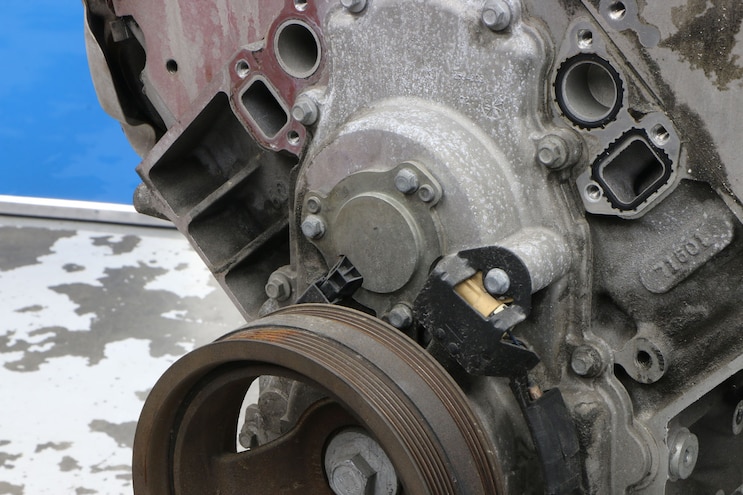 Of course, you must also consider the intended usage when choosing a cam profile, as wild cam timing affects things like idle quality and drivability, important factors for a daily driver. Rather than go hog-wild and max the cam timing out on our 6.2L L92, we decided to install one with a profile that walked the fine line between power and drivability. View Photo Gallery | 23 Photos
Photo 4/23   |   The first step in replacing the VVT cam and mechanism was to unbolt and remove the factory damper. 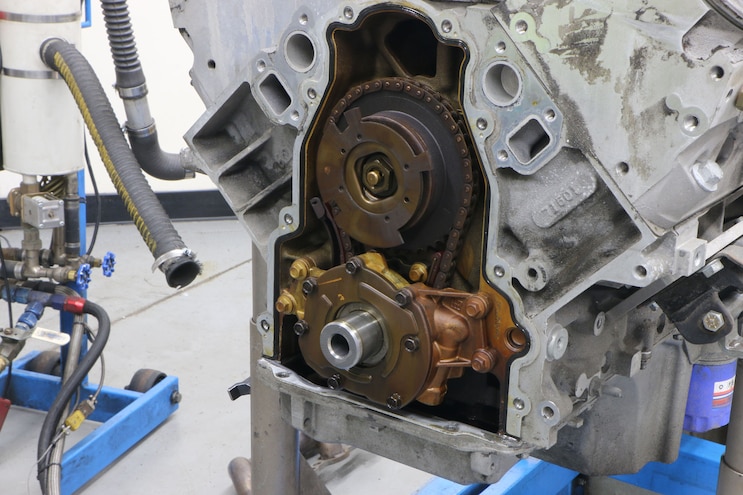 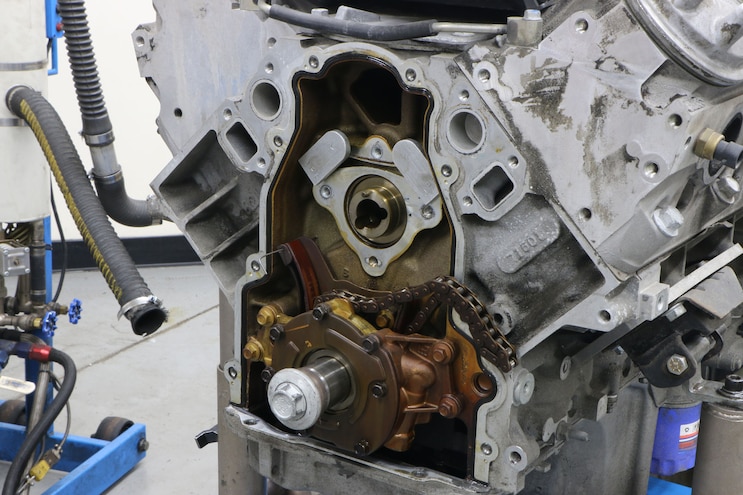 View Photo Gallery | 23 Photos
Photo 6/23   |   After positioning the engine at TDC and releasing the timing chain tensioner (note the Allen wrench), we removed the single bolt securing the cam sprocket. Removal of the cam retaining plate provided access to the single-bolt VVT cam. 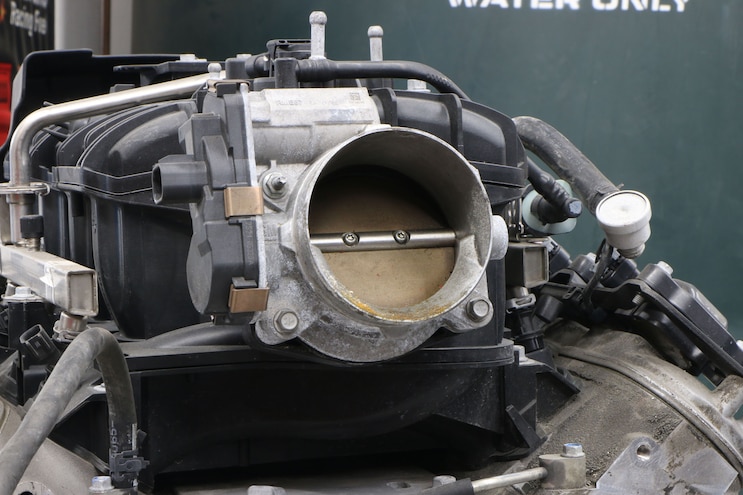 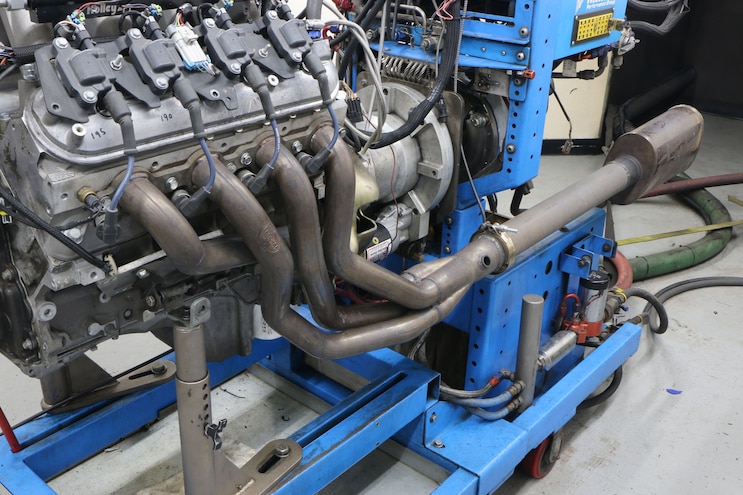 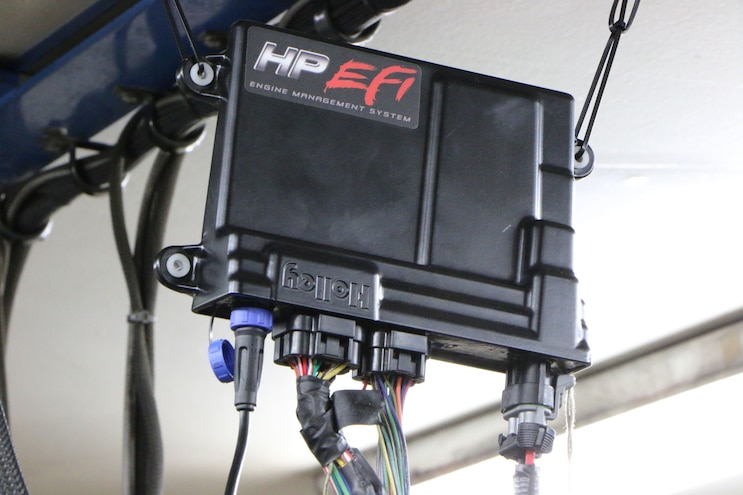 View Photo Gallery | 23 Photos
Photo 10/23   |   We dialed in the A/F ratio and timing of each cam with the Holley HP EFI management system. 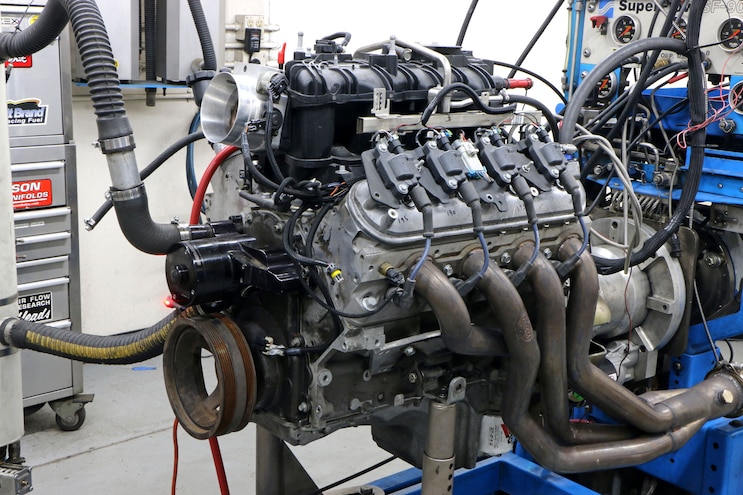 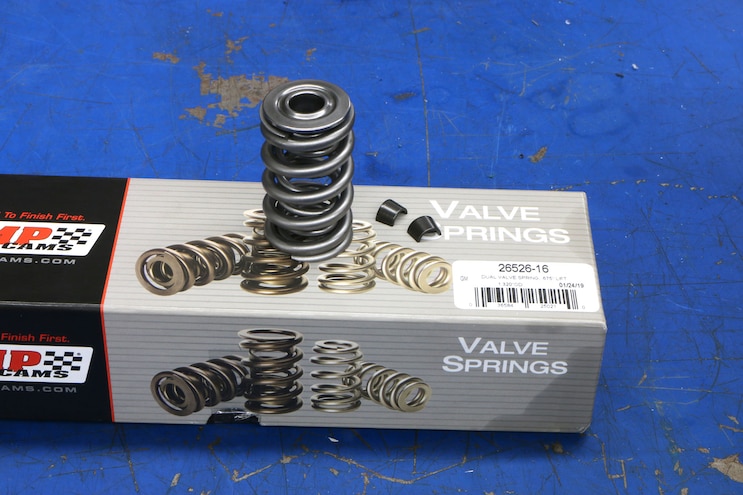 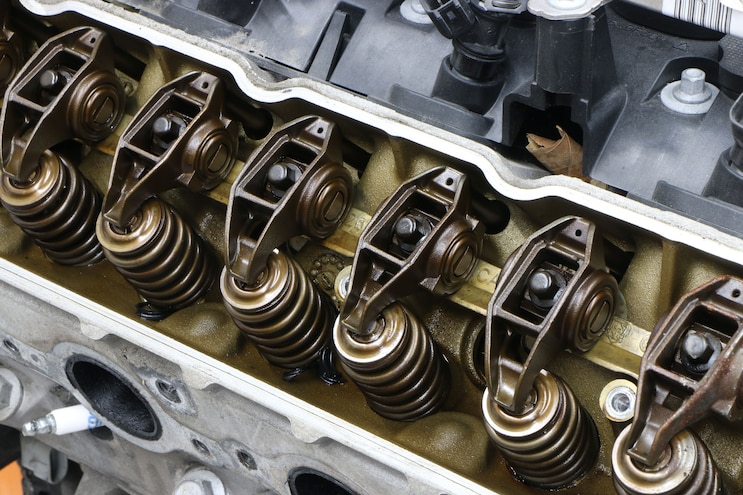 View Photo Gallery | 23 Photos
Photo 13/23   |   Replacing the springs required the removal of the L92 rockers. Note the use of offset intake rockers on the L92 rectangular port heads (like the LS3). 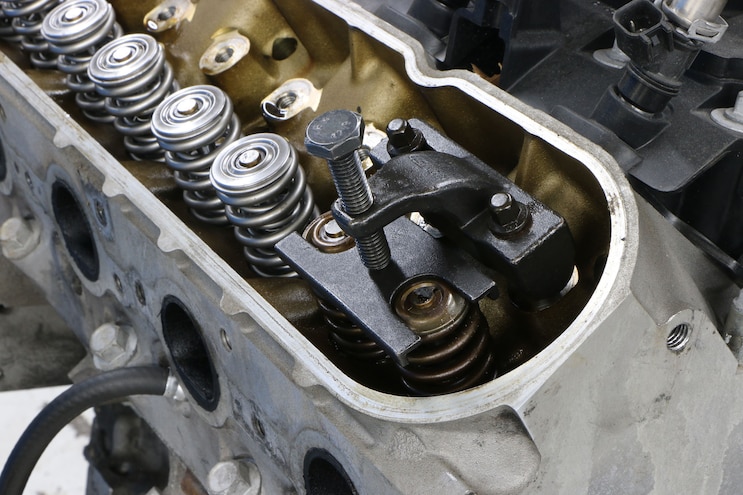 View Photo Gallery | 23 Photos
Photo 14/23   |   Using a spring compressor, we were able to replace both the intake and exhaust springs at the same time. 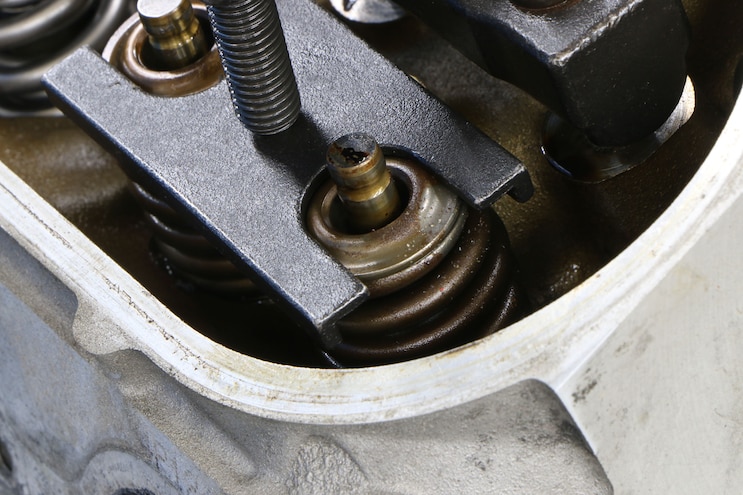 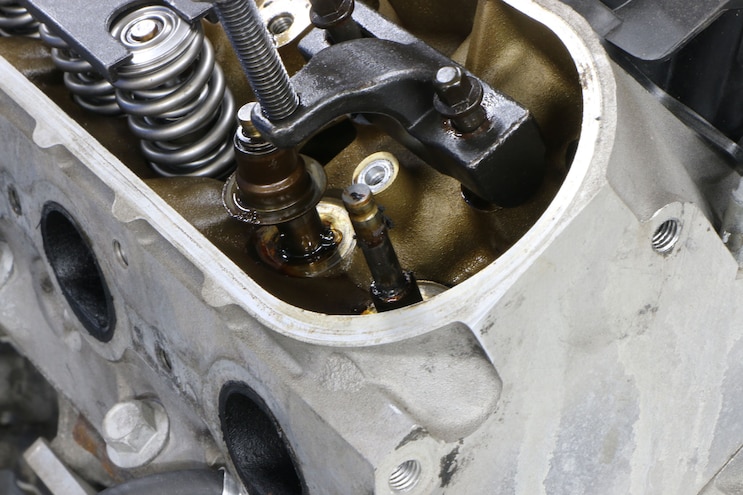 View Photo Gallery | 23 Photos
Photo 16/23   |   After removal of the springs, off came the factory valveguide seals. 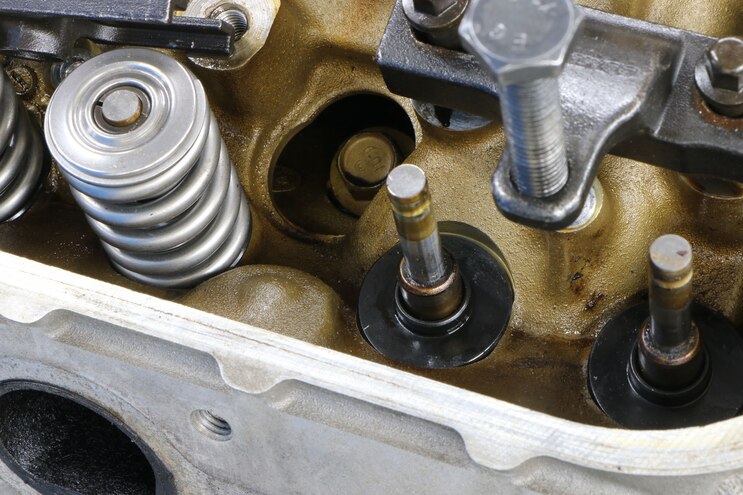 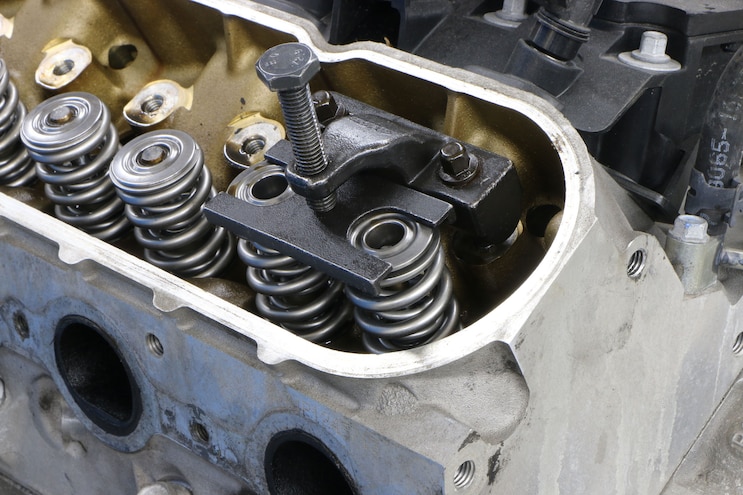 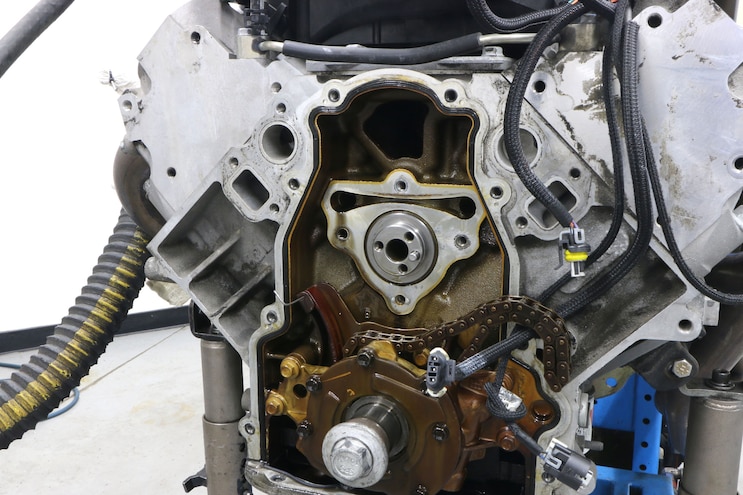 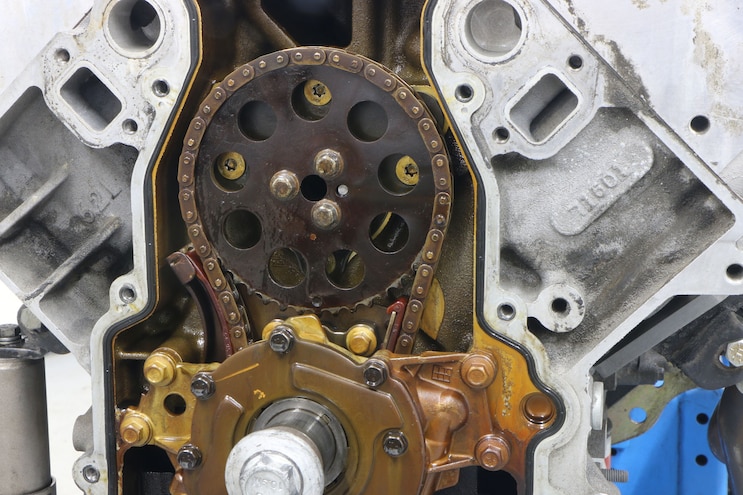 View Photo Gallery | 23 Photos
Photo 20/23   |   The Comp cam was installed using the three-bolt cam gear. Normally we would combine the 58x crank with a 4x cam gear on this application, but we did not have one handy. The Holley HP EFI management system allowed us to run the 58x engine without using the cam sensor. 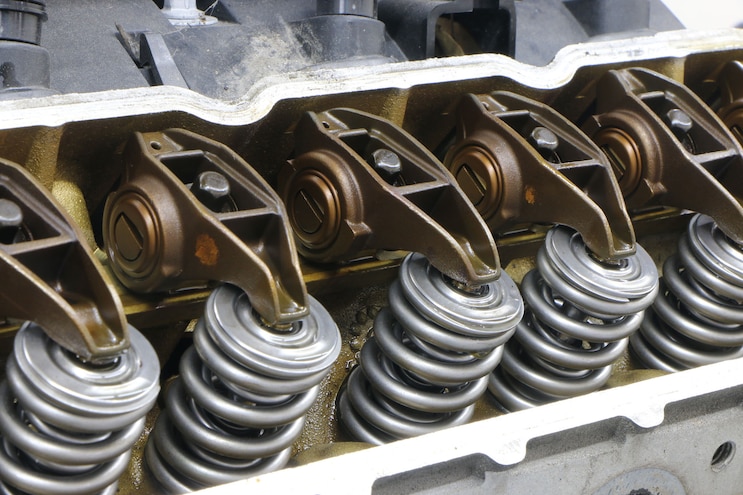 View Photo Gallery | 23 Photos
Photo 21/23   |   After the installation of the Comp cam, we reinstalled the hardened pushrods and stock rockers. 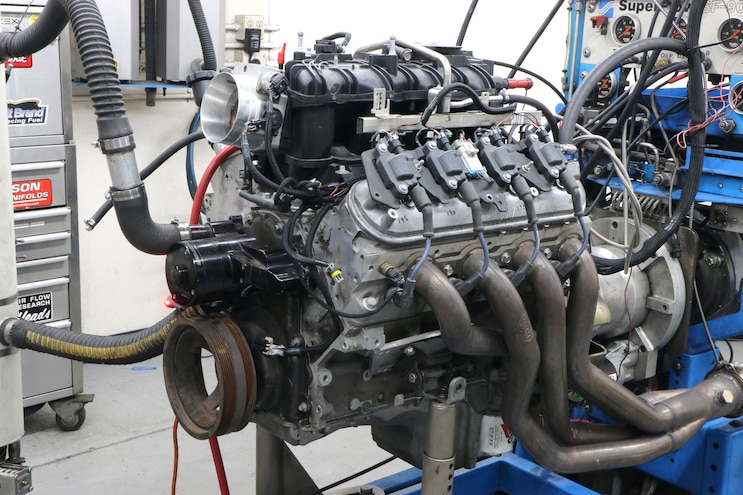 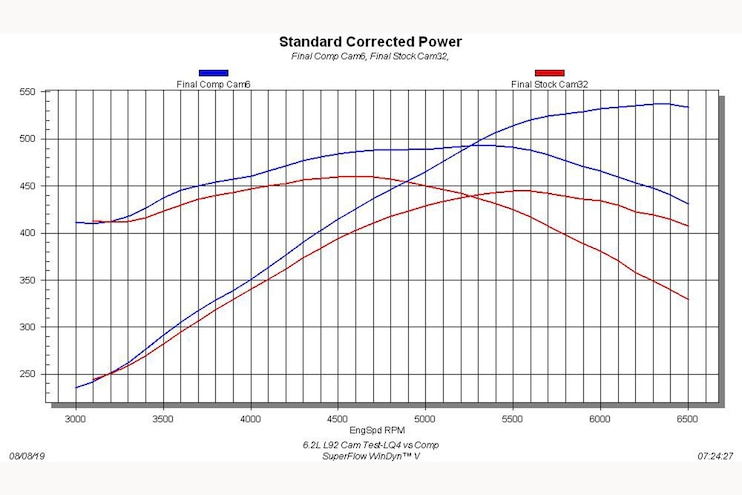 Gains like this are the reason we constantly harp on how great the LS engine family is. It's almost as if GM gave the aluminum 6.2L the L92 designation in anticipation of this cam test. In all fairness, we did replace the factory L92 VVT cam with a non-VVT LQ4 cam, but the gains are impressive nonetheless. Run with the LQ4 cam, the aluminum 6.2L L92 produced 445 hp at 5,600 rpm and 460 lb-ft of torque at 4,600 rpm. After the installation of the streetable Comp cam, the power output jumped to 537 hp at 6,300 rpm and 493 lb-ft of torque at 5,300 rpm. The Comp cam was far from wild, but it still managed to improve the peak power output by 92 hp, with gains exceeding 100 hp out near 6,500 rpm.

- OF
By Richard Holdener
15 Articles