Which Cummins Went In Which Dodge, And Why 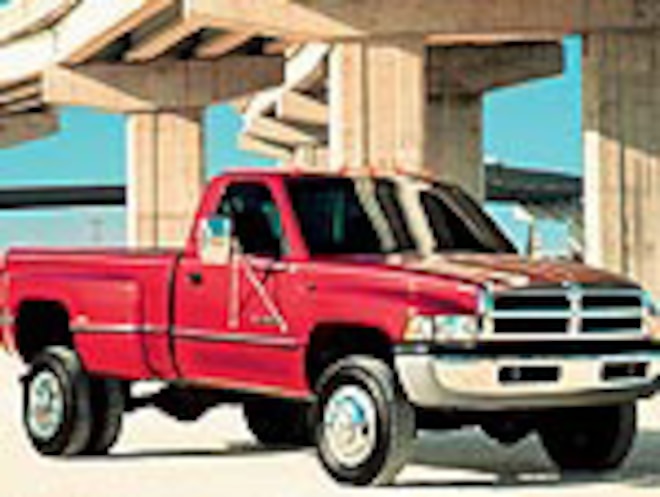 View Photo Gallery | 5 Photos
Photo 2/5   |   cummins Diesel Motor History first Generation
When Dodge dropped a Cummins B-Series 5.9L engine into the '89 Ram pickups, it marked the first time a genuine medium-duty diesel engine had been used in a light-duty truck. Sure, other pickups had diesels, but none of them had an engine with a gross vehicle weight (GVW) rating anywhere near the Cummins B-platform's 66,000-pound limit. But, how many versions of Cummins engines went into Dodge trucks, and what might be shared besides their SAE No. 2 bellhousing and bore and stroke dimensions?
Everything you need to know about the Cummins engine in your Dodge pickup can be found using the CPL (Control Parts List) on the engine data plate. The CPL identifies the performance of that engine and related parts, including rated power at rpm and fueling rate. It can be found on or near the driver side of the timing gear cover on every Cummins 5.9L shipped to Dodge, and when combined with the engine serial number, is all any Cummins center or technician needs to know to locate parts for your engine.
Typically, the engine history breaks down into four generations. Most changes correspond with truck restyles, marketing power wars, or a change described as "mid-year." (Editors Note: A mid-year engine change is generally applied to trucks built after January 1 of a given model year because of new emissions regulations required for the new calender year.)
However, the number of different CPL numbers used in Dodge trucks may surprise you. We asked Robert Patton, the Editor of Turbo Diesel Register and a former Cummins parts specialist, about that number and his reply was "four pages" of them-more than 70 versions through the current model. These account for various power ratings, emissions packages, and transmissions used behind the engine. To give you some context: There was just one CPL for the first two years of Cummins-powered Dodge trucks, and 12 for the '01 model year alone.
First Generation
The first two years Dodge diesels used a single CPL (804), the engines were not intercooled and the moderate-size turbo housing gave good response and peak boost pressure of 22-25 psi.
The injection pump was a Bosch VE rotary unit, and the lift pump was mechanical. A typical engine would start to fall off boost just past the 2,500-rpm peak power rating (earlier on modified trucks), and the rotary injection pump was often maxed out at 220-230 hp.
In contemporary testing, a regular cab four-wheel-drive pickup equipped with this engine and 3.54 axle gears would average nearly 20 mpg over the course of a year. Many owners could see better than 20 mpg unloaded on the highway and report 12-14 mpg towing as much as 10,000 pounds.
Unfortunately, some owners overloaded their trucks, and this led to many of the early manual gearbox failures. Others transmission failures were a result of drivers resting their arm on the shifter (the Getrag 360 shift forks are sensitive to that) and using gear lube instead of the specified 5W-30 motor oil that led to failure of the needle bearings: The later NV4500 became a common swap.
In mid-1991, an intercooler was added to lower NOx emissions and also brought running temperatures down. The aftermarket quickly developed intercoolers to retrofit into earlier models. Power ratings remained the same, but throttle response was softened a bit because of a larger turbine housing and peak boost in the 15-19 psi range. Virtually, any B-series 5.9L can be made to fit into this '72-'93 body style, but cooling ability is likely to limit modified outputs for anything more than drag racing. 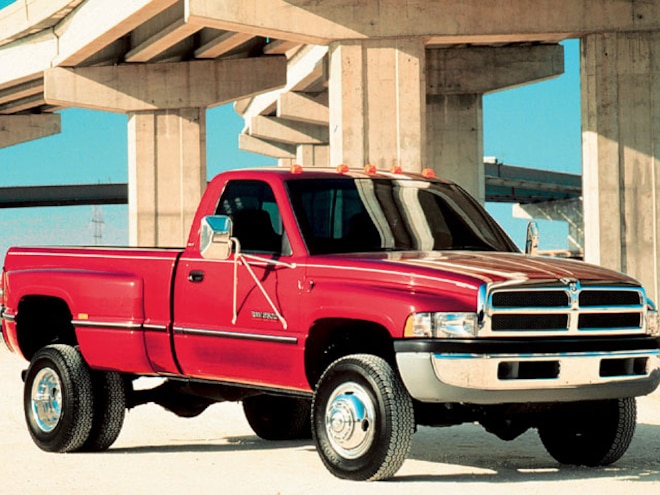 View Photo Gallery | 5 Photos
Photo 3/5   |   cummins Diesel Motor History cummins Dodge
The New Dodge
With the '94 Ram, Dodge made the biggest changes in the truck's history. Extra room in front meant a larger radiator and intercooler, and servicing the setback engine is easier than it appears.
A Bosch P7100 inline injection pump (that had been used on other Cummins B engines of 190 hp and up) marked the major change. It wasn't long before tuners had figured out how to double the engine's output, which in turn sent automatic transmission builders scurrying for upgrades. The manual transmission used was a New Venture NV4500. Some owners have experienced problems with these transmissions when the Fifth gear nut comes loose. A variety of fixes, both approved and otherwise, were developed to cope with the Cummins' power. Clutch size was also decreased, leading to more robust units from the aftermarket.
Rated engine outputs remained the same in these years for trucks with automatic transmissions, but manuals were bumped a bit. Mid 1994, a catalyst was added, and the status quo remained until 1996 when California trucks got an exhaust gas recirculation (EGR) valve. Ratings were again revised.
That was the last change Dodge made to the P7100-equipped engines. And many aftermarket companies figured out how to tune this engine (torque plates were popular) to run lots of fuel, boost (well past 40 psi), and push power outputs above 400 hp and 800 lb-ft.
The automatic transmission industry enjoyed every minute, and Ram diesels were running in speed contests at more than 140 mph.
Although the incidence rate is unknown, some B-series engines of this vintage suffered a loose upper dowel pin on the timing case cover. If the pin drops into the gears, very bad things happen, and later front cases had a contained dowel pin. A few relatively simple fixes are known, and if you take the front cover off you should always ensure the problem has been or is addressed.

View Photo Gallery | 5 Photos
Photo 4/5   |   cummins Diesel Motor History current Cummins
One Cam, 24 Valves
By 1998, Cummins had mastered pushrod-operated non-adjustable four-valve cylinders, and the layout was applied to the 5.9L and the engine was labeled ISB (Interact System B-series). The ISB engine also brought stiffer exhaust valvesprings (for use with exhaust brakes), a new two-piece exhaust manifold, a Holset HX35 turbo with wastegate, a larger oil pump, and a stiffer block. To quiet the new engine, noise-reduction techniques were applied to the valve cover, front covers, and oil pan.
The ISB was fueled by an electronically controlled VP44 rotary injection pump with central injectors. These engines are thought to be the noisiest Dodge Cummins yet, in part because minimum idle speed was computer regulated and not easily lowered as on earlier trucks. The VP44 rotary pump developed a reputation similar to that of the first Getrag gearboxes: more than adequate for stock use but not the best for tuning or running much power through.
DaimlerChrysler's warranty division has boxes of failed injection pumps that were paid for by the customer because the trucks had been chipped. The VP44 injection pumps often fail when the factory electric lift pump cannot supply adequate fuel to it. One of the first recommended accessories for these models is a fuel pressure gauge, because when the factory lift pump goes bad, it's usually not long before the much-more-expensive injection pump goes, too.
We should also note that '99-'00 trucks had the less desirable "code 53" blocks, which were prone to cracking on the rear passenger side. Investigate before investing in that engine.
For 2001, Dodge introduced a new manual gearbox, the NV5600, which was built like a tank and weighed even more than the optional automatics. This extra weight is the reason the towing capacity rating on some of the earlier higher-powered six-speed trucks was actually lower than on the earlier five-speed versions. An NV5600 could give you blisters shifting when it was new, but it had a short action and the stout construction to handle the new high-output HO Cummins engine that became optional.
With one engine power rating for automatic transmission and five-speed trucks, the HO engine added 10 hp and the biggest jump in torque yet (45 lb-ft) to 505 lb-ft. To handle the extra power, a host of changes (like piston cooling) were added to the engine to ensure durability.

View Photo Gallery | 5 Photos
Photo 5/5   |   cummins Diesel Motor History common Rail System
High Pressure Common Rail
Common-rail injection went on European Cummins engines in 2001 and the Dodge Cummins for model year '03, bringing much less noise, more power, and lower emissions. Despite the engine being more efficient, a heavier truck, bigger tires, and other factors conspired to drop real-world fuel economy slightly.
Most bottom-end hardware was the same as on the previous 24-valve engines, but the block was stiffened and given a bedplate. The redesigned head got hardened valve seats (intake and exhaust), a new front gear train, a modified HY35 turbo, a 3-1/2-inch exhaust, a crankcase vent system, a belt-driven power steering pump, and electronic control of the viscous fan clutch drive.
Torque peak dropped from 1,600 to 1,400 rpm for better off-idle grunt, while 50-state emissions trucks got another 15 hp and 200 rpm for 250 at 2,900. All the engines ran 22-24 psi boost, and the quiet and wider operating range were the primary advantages to the driver.
The HO model was upgraded with cracked-cap forged rods (still six-speed manual only), and bumped power output 60 hp and 50 lb-ft to 305 hp at 2,900 rpm and 555 lb-ft at 1,400 rpm, respectively. For the mid-'03 models, the HO became available with an automatic transmission, the 48RE, and the five-speed manual and 47RE four-speed automatic fell off the option list for 2004. You still couldn't get an HO Cummins in California.
That all changed on January 1, 2004, with the mid-'04 model "Cummins 600." Inconel valves and high-cobalt content Stellite exhaust valve seats complemented revised ports with less swirl, a bigger turbo compressor wheel, and electronic wastegate control for the HY35 turbo. To feed all that power, a new fuel lift pump and intake air heater that needed no ground strap found their way into the engine. This brought the top engine rating to 325 hp at 2,900 rpm with 600 lb-ft at 1,600 rpm, thanks to 30 pounds of boost-regardless of transmission or state the truck was sold in. For 2005, the torque rating was bumped to 610 to keep it ahead of GM's Duramax LLY engine that received 605 lb-ft rating.
The high-pressure common rail has proven reliable, although a few have found that even this injection system has limits when it comes to "black box" upgrades.

Dodge Cummins At A Glance

- OF
By Kris Wilkinsson
2 Articles