Inside Diesel Pumps And Injectors 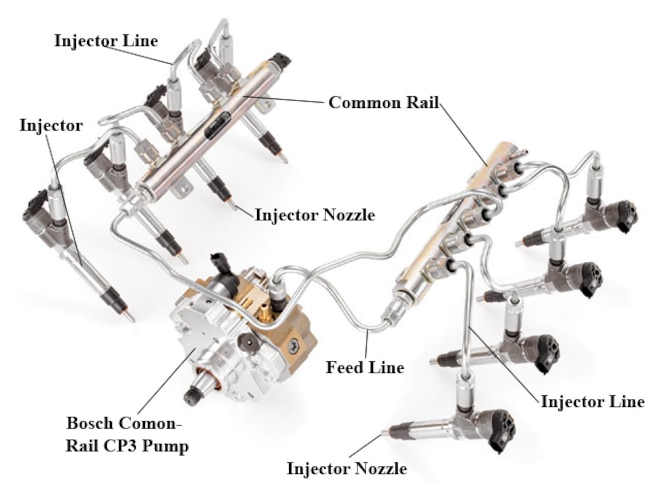 View Photo Gallery | 12 Photos
Photo 2/12   |   diesel Fuel Injection Tech breakdown
The key ingredient to maximizing the peak performance of a diesel engine is increasing the amount of diesel being burned. On old mechanical-injection engines, the only way to do this was to modify the injectors and/or the injection pump. The new electronic-injection systems have several ways to increase the fuel going into the cylinders, but ultimately, peak power production still comes down to the mechanical limitations of the injection components that build fuel pressure and inject the diesel into the combustion chambers.
The fuel system on most diesel engines is composed of three main parts: the injector, the injection pump, and in some cases, the engine control unit (ECU). In most diesel engines, fuel injectors are mounted in the engine's cylinder head(s), and the tip or nozzle of the injector sprays directly into the combustion chamber. In many cases, the injector is mounted just like a spark plug would be in a gas engine. But unlike fuel-injected gas engines that inject fuel at 10-60 psi, diesel fuel-injection systems run in the 10,000-30,000-psi range. 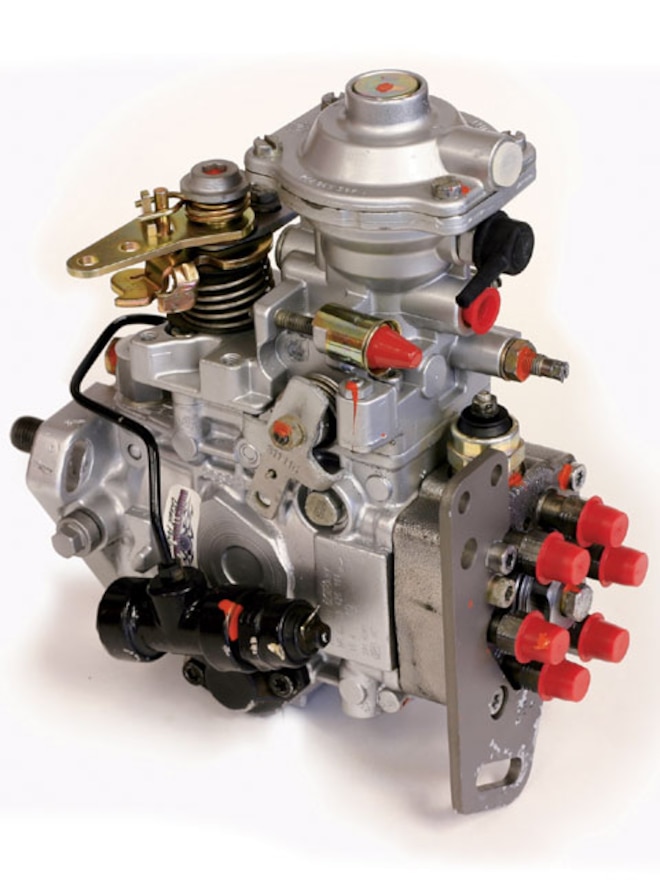 View Photo Gallery | 12 Photos
Photo 3/12   |   diesel Fuel Injection Tech injection Pump
The VE pump is a distributor-style, mechanically controlled, axial-piston pump. Its input shaft is driven by the engine, and fuel is pressurized by axial pistons. Fuel is fed to the injectors by a port-controlled distributor; this mechanical device controls the timing and quantity of fuel going to each injector. 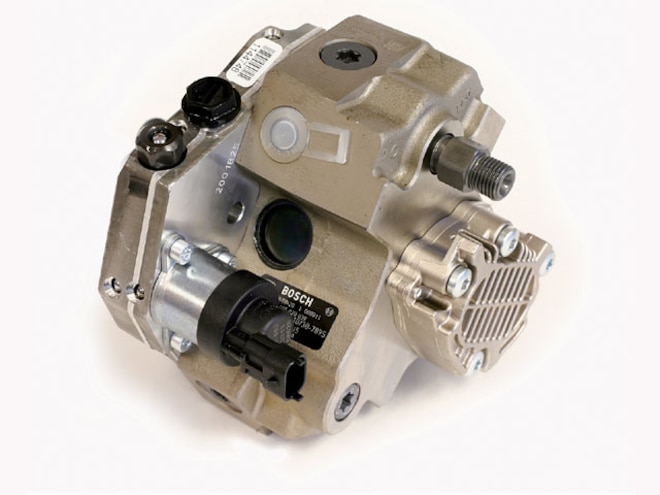 View Photo Gallery | 12 Photos
Photo 4/12   |   diesel Fuel Injection Tech bosch Cp3 Common Rail Pump
The CP3 is a radial-piston pump for high-pressure, common-rail injection systems. Manufacturers seem to be taking all diesels in the direction of the common-rail injection system. With Ford's new 6.4L Power Stroke switching to a Siemens common-rail system, all the domestic 3/4- and 1-ton diesel trucks will now be using common-rail technology. The common-rail system uses an accumulator rail(s) to maintain fuel at high pressure; this rail(s) feeds the fuel to the injectors. The CP3 pump functions similarly to the VP44, but the main difference is that the CP3 doesn't have a solenoid for fuel delivery to the injectors. The common-rail system uses either solenoid-valve or piezo-electric injectors to control fuel quantity and timing. The CP3s used on the Cummins and Duramax engines are very similar. The only difference is that the Duramax CP3 uses different fittings to feed two rails (one for each bank of cylinders), whereas the Cummins CP3 feeds only one rail for all six cylinders.
Modified CP3 pumps are available to increase fuel flow by 30 percent, and depending on other engine mods, this will add 60-100 hp. There are also kits to run dual CP3s on the Duramax or Cummins. A second CP3 is added with this kit, and it's driven by a belt pulley. With twice as much pumping capacity, good fuel pressure can be maintained when using aggressive injectors and electronics. 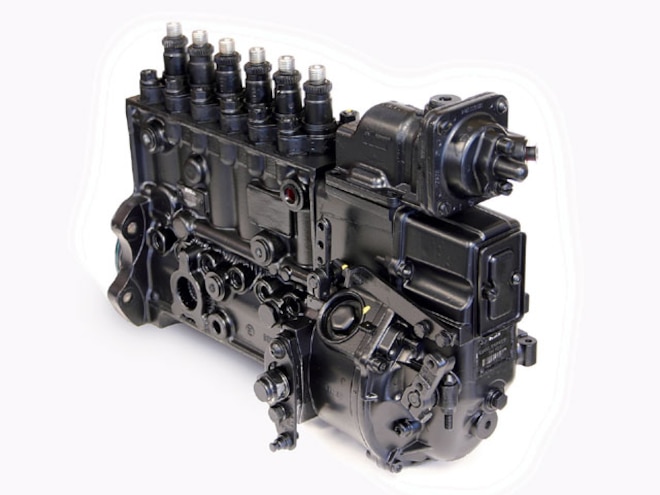 View Photo Gallery | 12 Photos
Photo 5/12   |   diesel Fuel Injection Tech bosch P7100
The P7100, or P-pump, is an inline-injection pump that uses a cam to actuate plungers to pressurize the fuel. According to some diesel fanatics, this is the mother of all injection pumps because of its extraordinary capabilities. Although it was replaced by the electronic VP44 pump on the 24-valve Cummins, some heavily modified trucks have taken a step back and switched the VP44 for a P-pump because of its ability to flow large amounts of fuel.
The aftermarket offers dozens of performance upgrades for the P-pump, making it the Holley 4-bbl of diesels. Industrial Injection alone has three levels of modified P7100s: The Dragon Fly has mild modifications and uses stock 12mm pumps capable of 550 cc of fuel delivery, the Dragon Flow uses 13mm pumps for 800 cc of fuel delivery, and the Super Dragon Flow uses 14mm pumps for 1,400 cc of fuel delivery. All these pumps can have the timing modified. 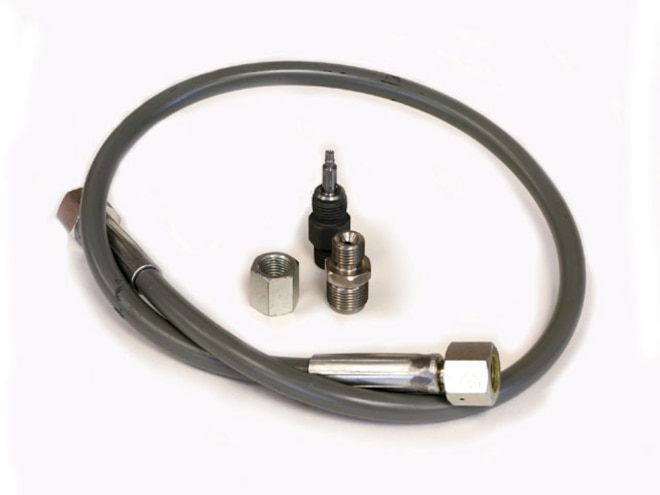 View Photo Gallery | 12 Photos
Photo 6/12   |   diesel Fuel Injection Tech cps Dual Feed Fuel Line
This part from Industrial Injection increases the fuel volume to the common-rail fuel system by adding an additional fuel-feed line between the pump and common rail. The downfall of the common-rail system is that after a full-throttle burst, the rail takes time to recover to maximum fuel pressure. Dual-feed lines are designed to cut rail recovery time in half. Less restrictive fittings are also used to increase fuel flow. Industrial Injection claims this simple modification can add up to 50-70 hp.

View Photo Gallery | 12 Photos
Photo 7/12   |   diesel Fuel Injection Tech 59l Cummins Injector
This Bosch injector was used on both the first- and second-generation 12-valve Cummins engines. The only difference is that the inlet size was slightly altered in the two Cummins models. These hydraulic injectors fire or pop off when they receive the correct quantity and pressure of fuel from the pump. The most common and simplest modification to any injector is to remove the nozzle and either increase the size of the holes, add more holes, or do both (in some cases). The aftermarket has a range of injectors available to suit customer needs. Typically, high-horsepower injectors are modified internally so the nozzle and pin are fed with a second fuel inlet. Modifications may also be made to most of the internal components of the injector.

View Photo Gallery | 12 Photos
Photo 8/12   |   diesel Fuel Injection Tech bosch Vp44 Injection Pump
The VP44 is a distributor-style, solenoid-valve-controlled, radial-piston pump that is electronically regulated. The Bosch VP44 is driven by the engine, and fuel is pressurized by several radial pistons. The internal radial piston pressurizes the fuel, and a high-pressure solenoid valve opens and closes the chamber outlet that distributes specific quantities of fuel to each of the six injectors. The VP44 has a built-in ECU that communicates via a CAN bus system with the main ECU and requires an electric lift pump to feed it diesel from the fuel tank.Hot-rodded VP44 pumps can add up to 100 hp thanks to different programming software on the pump ECU as well as internal mechanical modifications to adjust timing and capacity.

View Photo Gallery | 12 Photos
Photo 9/12   |   diesel Fuel Injection Tech 24 Valve Cummins Injector
The 24-valve injector is very similar to the injector used on the older 12-valve engines. It looks different because it uses a stepped nozzle holder, but internally, it functions in a similar manner. The injector nozzles are modified using either an electrical-discharge machine (EDM) or an extrude-hone process-and sometimes both. The EDM process uses an electrode and electrolyte solution, whereas the extrude-hone process uses an abrasive fluid to increase the orifice size.

View Photo Gallery | 12 Photos
Photo 10/12   |   diesel Fuel Injection Tech heui
The HEUI was developed by Caterpillar and is used in the 7.3L Power Stroke V-8. This injector is significantly different from the Bosch injectors because it uses an engine-driven oil pump to feed high-pressure oil into the injector to pressurize the fuel. Because oil pressure is used to pressurize the fuel inside the injector, a high-pressure fuel pump is not needed. Fuel is fed to the injector at a relatively low pressure (50-70 psi) and a solenoid controls the high-pressure oil going into the plunging mechanism to ramp injection pressure up to 21,000 psi. To increase the flow of the injector, the aftermarket either extrude-hones or EDMs the injector nozzles, depending on customer requirements. Modifications are also made to the internal pumping mechanism in the injector; larger plungers are used, and the internals are machined differently. When aggressively modified injectors are used, Industrial Injection recommends using dual high-pressure oil pumps so the injector is not starved for oil.
The Duramax and Cummins engines use the same Bosch CP3 pump, so it makes sense that the injectors are also very similar.
Although the external body of the injectors looks different, the internals and functionality of these injectors are very similar. A solenoid valve on the top of the injector controls the fuel coming into the injector from the common rail. Most of the chips and downloaders available modify the duration that this solenoid stays open to add fuel and, thus, horsepower. To increase the fuel being injected, the size and shape of the holes in the nozzles are modified.