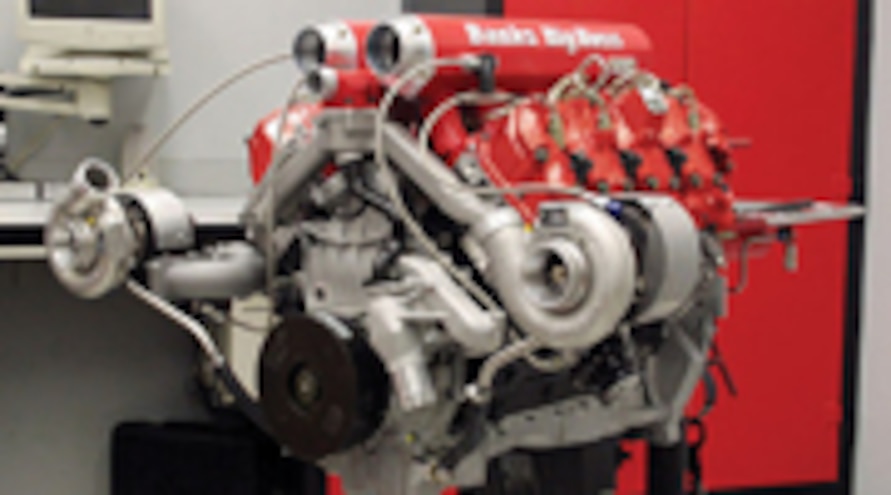 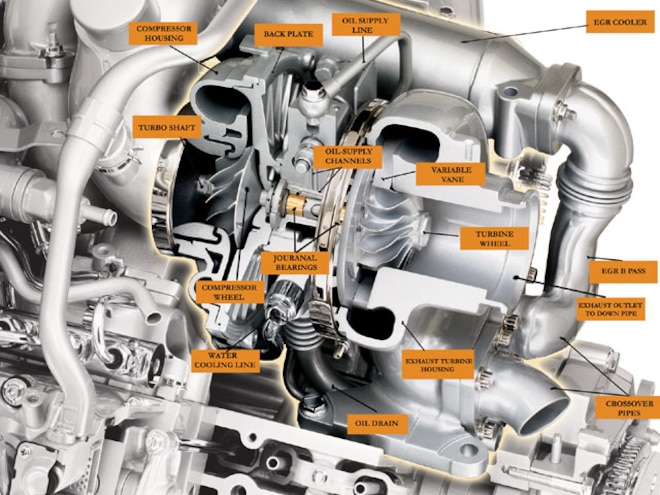 View Photo Gallery | 16 Photos
Photo 2/16   |   turbocharger Tech breakdown
Whether you drive a Chevy, Dodge, Ford, or GMC diesel, if it was built after 1995, it has a turbocharger under the hood-perhaps two if you've already picked up the '08 Super Duty. Ford has stepped up to the dual-turbo design by BorgWarner after using Garrett's variable-geometry turbo on the 6.0L Power Stroke and a fixed Garrett turbo on the 7.3L. Stock Dodge 5.9L trucks come with a fixed Cummins Holset turbo under the hood, a titanium-aluminum-alloy compressor wheel was added in the '97 model, and an electrically variable nozzle turbo is hooked to the 6.7L Cummins. Chevy and GMC trucks come with IHI (LB7) or Garrett turbos from the factory. The 6.5L from the '90s and the LB7 Duramax use fixed turbos, and the LLY-LMM engines use variable vanes in the turbine to keep boost on tap.
Each design uses the same basic principle: exhaust gases are routed into the turbine housing and spin the turbine wheel, which turns a shaft attached to the compressor wheel then sucks air from the intake and pressurizes it using the compressor housing, pushing more air into the cylinders than a nonturbo diesel. More air means more fuel can be used, which increases power output and efficiency. Using a bigger turbocharger or stacking multiple turbos is an easy way to get more power out of your stock diesel, but without proper planning, you could build an engine that will only achieve boost at high rpm-not much fun on the street. Before you upgrade your stocker, get familiar with the internal workings of these power-adders and some of the turbo terminology you may hear in the local performance shop.
Aftercharger: A radiator placed between the turbo-compressor outlet and the engine intake manifold used to cool the intake charge, which is heated by the pressurization of the turbo (also called an intercooler or charge air cooler).
Airflow (cfm): A measurement of how much air/exhaust is able to flow through the turbo. Airflow is measured in cubic feet per minute. 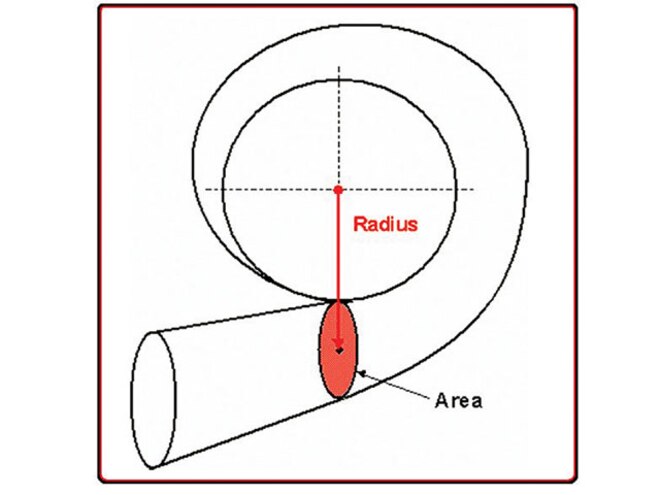 View Photo Gallery | 16 Photos
Photo 3/16   |   turbocharger Tech diagram
Area/radius (A/R): The ratio of the cross-sectional area of the exhaust-turbine inlet/compressor outlet divided by the radius from the center of the turbo wheel to the center of the cross-section (right). Differences in compressor A/R do not affect performance very much, but a large turbine A/R will allow big power gains at high engine rpm-this will cause turbo lag at low speeds. 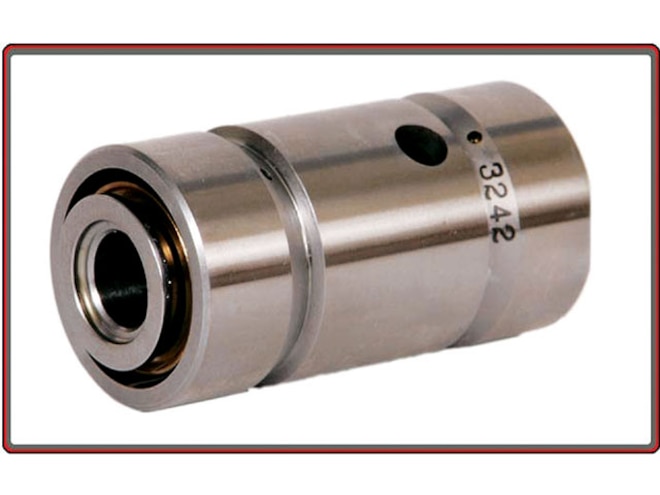 Blow-off valve: A valve between the turbo and the intake manifold that vents air to avoid turbo surge when a preset pressure limit (boost) is surpassed.
Boost: The intake pressure created by the spinning of the compressor wheel inside the housing. Measured in pounds per square inch over the normal atmospheric pressure (14.7:1).
Boost controller: A mechanical or electrical device that alters the boost-pressure signal sent to actuate the wastegate, allowing higher boost pressures than would normally be permitted.
Boost creep: When the boost rises past the set limit. This is often caused by a wastegate that cannot handle the exhaust flow.
Boost spike: A period of uncontrolled boost when the wastegate and/or blow-off valve cannot act fast enough because of sudden changes in the engine load.
Boost threshold: When engine conditions provide enough exhaust pressure to create boost in the intake manifold.
Boreless turbo: A turbo that uses a compressor wheel that doesn't have a hole drilled through it. This design increases the strength of the compressor wheel in its highest stress area.
Centersection: The housing between the exhaust and intake sides of the turbo that houses the turbo shaft and contains the bearings, oiling system, and water-cooling system.

View Photo Gallery | 16 Photos
Photo 5/16   |   turbocharger Tech diagram
Charge air cooler: A radiator placed between the turbo compressor outlet and the engine intake manifold used to cool the intake charge, which is heated by the compression of the turbo (also called an intercooler or aftercooler).
Choke line: The boundary on the righthand side of a compressor map that indicates the rpm where the turbo efficiency quickly drops. If this happens at low rpm, a larger turbo is needed.

View Photo Gallery | 16 Photos
Photo 6/16   |   turbocharger Tech compound Turbo
Compound turbos: Two or more turbos that feed into each other in series to build high boost pressures. The new 6.4L Power Stroke in the '08 Super Duty uses a small variable-geometry turbo that pumps into a larger turbo to create stock boost levels of 20 psi at low rpm and 40 psi when the engine is under a full load.
Compressor map: A graph that diagrams the performance of a turbo by showing turbo speed, efficiency, flow rate, and boost pressure. The left border represents the surge line, the right side shows the choke line, and the patterns in between are efficiency islands.
Compressor wheel: The fan blades that suck in the intake air and compress it against the compressor housing and backplate.
Cool down: Running the engine until the exhaust temperature is low (less than 300 degrees F) so oil in the centersection doesn't cook when the engine is shut down and the oil flow stops.
Crossover pipe: A tube leading from the exhaust manifold to the turbine inlet. V-6 and V-8 engines use a crossover pipe, but the inline-six Cummins exhaust manifold feeds directly into the turbo.
Divided turbine inlet: A split inside the exhaust manifold and turbine housing that separates exhaust output from cylinders to prevent turbulence based on the firing order.
Dr. Alfred Buchi: Inventor of the turbocharger in 1909. He proposed the first turbodiesel engine in 1915.
Downpipe: The exhaust pipe that leads from the turbine outlet to the exhaust system under the vehicle.
Efficiency islands: Areas on a compressor map that indicate the operating conditions under which peak efficiency occurs.
EGR: Exhaust-gas recirculation routes some exhaust gas back into the intake manifold after it passes through a water-cooled heat exchanger. EGR reduces emissions of nitrogen oxides.

View Photo Gallery | 16 Photos
Photo 9/16   |   turbocharger Tech heat
EGT: Exhaust-gas temperature that should be monitored to prevent the turbo from overheating, which can lead to failure (1,250 degrees F maximum for extended periods).
Exducer: Where flow exits the turbine or compressor wheel.
Exhaust manifold: A cast-iron collector on the engine head(s) that routes exhaust gases to the turbo, EGR system, and crossover pipes (V-6 and V-8).

View Photo Gallery | 16 Photos
Photo 10/16   |   turbocharger Tech external Wastgate
External wastgate: A wastegate that is not built in to the turbo.
Headers: Tubular steel sections used in place of exhaust manifolds for maximum flow efficiency. Rarely used in diesel applications.
Heat soak: When heat from the turbine housing is transferred to the compressor side of the turbo. Water-cooled turbos help prevent this, along with keeping the lubricating oil cooler.
Impeller: Another name for a compressor wheel.
Inducer: Where flow enters the turbine or compressor wheel.
Intake manifold: Routes airflow from the intercooler line into the intake ports in the head(s) of the engine.
Intercooler: Air-to-air or air-to-water radiators used between the turbo and the intake manifold to reduce intake temperature, which is heated by the pressurization inside the turbo (also called aftercharger or charge air cooler).

View Photo Gallery | 16 Photos
Photo 11/16   |   turbocharger Tech internal Wastegate
Internal wastegate: A built-in valve that diverts exhaust gases away from the turbine when a certain boost level is reached on the compressor side of the turbo. Can be mechanically or electrically controlled.

View Photo Gallery | 16 Photos
Photo 12/16   |   turbocharger Tech journal Bearings
Journal bearings: Hollow brass sleeves suspended in oil that allow the turbo shaft to spin freely inside the centersection.
Mass flow rate: A representation of how much air (based on density) is being output by the turbo for use by the engine.
Oil restrictor: A device that reduces the amount of oil delivered to a ball-bearing turbo because it requires less oil pressure than a stock journal-bearing unit.
Oil supply/return lines: Routes engine oil to and from the turbo to lubricate the bearings in the centersection.
Pressure ratio: The absolute compressor outlet divided by the absolute inlet pressure and represented on the left side of a compressor map.
Shaft: The piece that travels through the centersection and connects the turbine wheel to the compressor wheel.
Shaft play: Condition in a worn turbo where the shaft is allowed to move (other than spin). Signs of play indicate the turbo is ready to fail by allowing the fan blades to contact the housings or other problems. An abnormal whine or scraping sound can be a sign that a turbo is suffering from shaft play.
Spool: Another term for turbo boost. A turbo is spooled up when it is creating boost in the intake manifold.
Supercharger: Unlike a turbocharger, it is powered by a belt on the front of the engine that spins a compressor to create boost. It's less efficient than a turbocharger and is not used in light-duty diesel vehicles.
Surge: When boost pressure builds up to the point that it causes the compressor wheel to stall. This can be prevented with the use of bypass valves. Also known as bark.
Surge line: The left boundary of a compressor map that represents operating conditions where a surge is likely.
Trim: The ratio of the inducer area divided by the exducer area.
Turbine wheel: A wheel that is spun by exhaust gases that pass through the fins and into the housing before dumping into the exhaust pipe.
Turbo lag: The time it takes for a turbo to spool up after the throttle has been increased.
Turbo speed lines: Lines on a compressor map that represent the rotational speed of the compressor wheel.
Turbo timer: An electronic device that keeps an engine running before shutdown to ensure EGT is low enough to prevent oil from cooking in the centersection.

View Photo Gallery | 16 Photos
Photo 14/16   |   turbocharger Tech variable Nozzle
Variable nozzle: A sliding nozzle in the exhaust side of the turbo that can reduce the volume around the turbine fan blades to increase turbo rpm at low engine loads.

View Photo Gallery | 16 Photos
Photo 15/16   |   turbocharger Tech variable Vanes
Variable vanes: Adjustable blades that route exhaust gases directly into the turbine wheel at low engine rpm to increase spool on tap at low speeds.
Wastegate: Bypass that diverts excess exhaust gases away from the turbine once a preset boost level is reached in the compressor side of the turbo. It can be built in to the exhaust-turbine housing (internal) or can be separate from the turbo housing (external).