Diesel Injection Pumps - How It Works 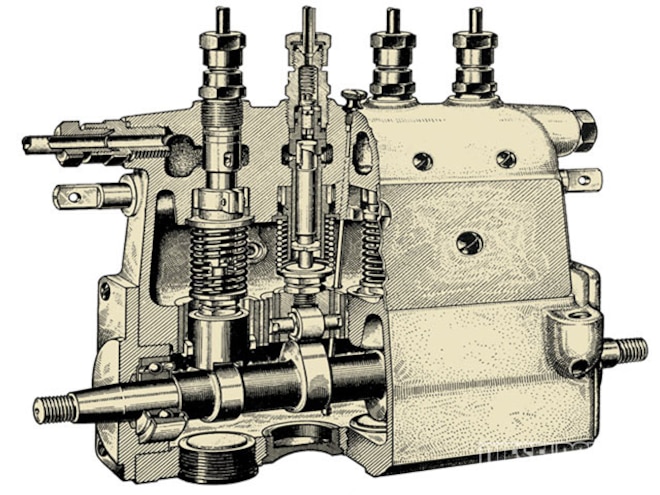 View Photo Gallery | 5 Photos
Photo 2/5   |   diesel Injection Pumps side Angle
The fuel injection pump is the heart of the diesel engine. Precisely delivered fuel maintains a rhythm or timing that keeps the engine running smooth. Simultaneously, the pump also controls the amount of fuel needed to gain the desired power. The injection pump does the job of both the throttle and the ignition system needed in gasoline engines. When troubleshooting a gasoline engine, you check compression, fuel, and spark. A diesel doesn't have an ignition system, so there is one less thing to go wrong with it. Major advances in the development of the diesel engine are a direct result of better fuel injection. Here is how the injection pump works.
Inline-injection (Jerk) Pumps
The first pumps to use plungers to force metered fuel to the combustion chamber were developed back in the 1890s. It took almost forty years, but in 1927 Bosch introduced the mass-produced helix-controlled inline pump. These first pumps look a lot like the Bosch P7100 (P-pump) on '94 to '98 Dodge Ram 5.9L Cummins engines. Sometimes called jerk pumps, they are constructed from separate pump and plunger units connected inline, one per cylinder. They are activated by a cam, which is mechanically connected to the engine. Still, the pump has the ability to vary timing, although not to the sophistication of an electronically controlled system. Inline injection pumps look like mini inline engines. The earliest inline injection pumps delivered 3,000-5,000 psi of injection pressure, while the newer Bosch P7100, found on '94 to '981/2 Cummins engines, delivers 18,000 psi of pressure.
Distributor (Rotary) Injection Pumps
These types of pumps have only one fuel-metering plunger. A spinning rotor makes a hydraulic connection with the different ports on the distributor head, somewhat similar to the way a distributor works on a gasoline engine. Benefits of a rotary-style pump with only one plunger are all the shots of fuel are exactly the same, and it makes for a smaller overall package. Also, distributor-style pumps have less moving parts compared to inline pumps. Two examples of mechanical rotary pumps are the Stanadyne DB2 and the Bosch VE. The Stanadyne DB2 produces 6,700 psi of pressure, while the Bosch VE produces 17,000 psi.
An example of an electronic rotary pump is the Bosch VP44, which is able to produce 23,000 psi of pressure. This is the smartest pump with the most responsibility-even compared to new common-rail CP3 pumps. This is the case because all a CP3 needs to do is create pressure. Besides creating pressure, the VP44 needs to electronically control the timing and quantity of fuel delivered to the engine.
Common-Rail Injection
With common-rail fuel injection, the pump itself lost much of its authority to decide when the fuel it pressurizes gets delivered and at what quantity. For example, the CP3 pump receives fuel from the fuel tank. It then uses a radial-piston design to increase pressure immensely. The highly pressurized fuel is sent to the common-rail which is basically an accumulator for the injectors. The injectors take over from there.
Unit Injectors
The lines connecting the injection pump to the fuel injector produced problems for early diesel engineers. So in 1905, Carl Weidman got rid of them by combing the injection pump and the injector. The unit injector is a compact fuel injection design in which the pump plunger creates high pressure by a mechanical force applied by the engine. The plunger and injector blend into one unit whose job is to deliver the fuel spray to the combustion chamber. The most common application for unit injectors are Volkswagens and large diesel engines. DP
Interesting Fuel Injection Facts
*The first diesel engines used compressed air to blast fuel into the combustion chamber. This was leftover technology from experiments with coal dust.
*The Atlas Imperial Diesel Company of Oakland, California, developed its first common-rail fuel system back in 1919.
*A major problem for fuel injection systems is not getting a dribble at the end of the injection. Even a small extra drip would throw off the combustion cycle.
*In today's diesel engines, fuel leaves the injector at 30,000 psi. For comparison, this number fits in the range of pressures in hich waterjets operate. Watejets use highly pressurized H20 to cut through many different types of materials, including plastic, wood, steel, and aluminum.
*Cummins and Scania teamed up to create the XPI High-Pressure Common-rail injection system, which is able to maintain high fuel pressure at any engine peed.
*The first injection pumps had oil dipsticks.