Turbochargers - How It Works 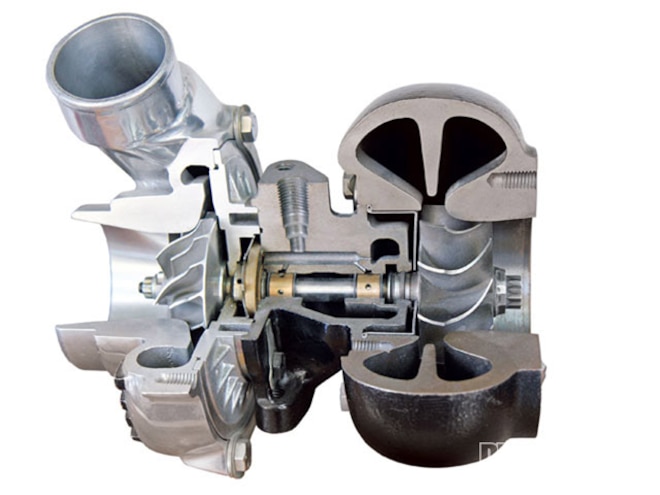 View Photo Gallery | 5 Photos
Photo 2/5   |   turbochargers turbocharger
Before turbocharged diesels hit the truck market, you had few choices. Either you bought a 6.9L IDI F-series Ford (rated at 170 hp or 180 hp) or the 130hp, 6.2L Chevrolet C/K-series. As of 2009, Chevy, Dodge, and Ford all offer packages with 350 hp or more, while meeting much stricter emissions standards. The aftermarket has embraced turbocharging as well, with 500-plus-horsepower becoming an everyday figure. Turbocharging is the biggest single reason why today's diesels can achieve these power levels, so with that history in mind, let's take a closer look at how the single most important part on your engine works.
The Basics
On an average day, air pressure at sea level is about 14.7 pounds per square inch (psi). When an engine is turbocharged, the turbocharger acts like a very high speed fan, which forces more air into the engine. The amount of pressure a turbo can generate is measured in pounds per square inch above atmospheric pressure. So a turbocharged engine with 15 pounds of boost would be moving roughly twice the air of a naturally aspirated engine, and all things being equal, would make roughly twice the power. With newer diesels, boost pressures can be as high as 40 psi, yet the engine will remain reliable, and make three to four times the power of a naturally aspirated diesel.
How A Turbo Works
A turbocharger in its most basic form consists of only a few parts: a frame, shaft, compressor, turbine, and compressor and exhaust housings. Exhaust gases from the engine are used to spin the turbine, which in turn drives the compressor through a shared shaft, which generates boost pressure to be sent to the engine. These types of turbos have been used successfully since the 1920s in racing and diesel engines. 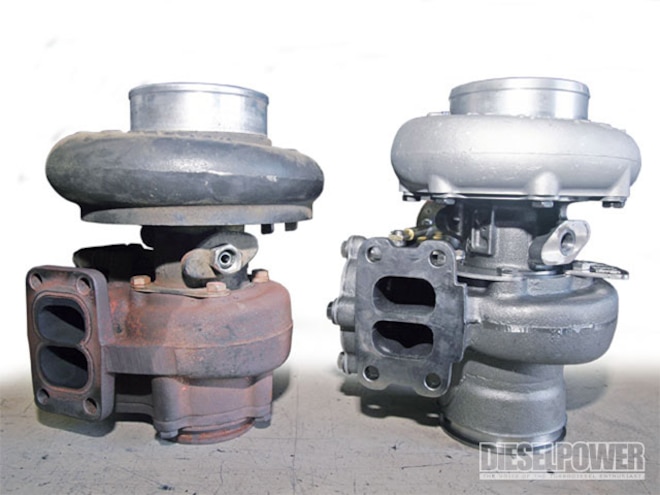 View Photo Gallery | 5 Photos
Photo 3/5   |   Here, a BD Super B turbo is seen next to a stock HX35 (found on '94-'981⁄2 Cummins engines). While they may look similarly sized, there are several subtle differences. The compressor housing is larger to achieve a higher maximum airflow, while the exhaust housing is smaller for better spool-up characteristics. Internal differences in oiling, bearings, and turbine and compressor wheels are present as well.
Boost And Drive Pressures
While we've already introduced boost pressure, another important aspect of turbocharging is drive pressure. Drive pressure is the amount of force (in pounds per square inch) that is being used to spin the turbocharger. A drive-to-boost pressure ratio of 1:1 is ideal, although in reality, drive pressure is usually a bit higher than boost pressure. If a situation occurs where drive pressure far exceeds boost pressure (say, 35 psi boost, 65 psi drive pressure) then you might be looking at trouble. To imitate a high drive pressure situation, try breathing in a normal breath, then cover your mouth with your hand and exhale. That is what you're doing to your engine. High drive pressures are hard on parts and make your turbocharger much less efficient.
Too much boost can also be a problem for turbochargers. To produce more boost, turbos will spin faster, and every turbocharger has a spot where it just can't spin any faster. If you have an HX35 (found on '94-'98 1/2 Dodges) for example, it can only produce about 40 psi before overspeeding becomes a threat. If you run 45 psi of boost or more on an HX35 for any extended period of time, your turbocharger is almost sure to fail.

View Photo Gallery | 5 Photos
Photo 4/5   |   Here is an example of an external wastegate (arrow). The wastegate takes excess exhaust pressure from the engine and diverts it out the downpipe. This way, a smaller exhaust side housing can be used on the turbocharger for better spooling characteristics.
Internal And External Wastegates, And Turbo Lag
In 1989, when Dodge introduced its diesel-powered Ram D250, it had a non-wastegated WHC-1 turbocharger installed on its Cummins engine. The idea was, since these trucks would mostly be used for hauling, great response was not needed. As trucks started becoming popular daily drivers, the need for better-responding turbochargers became a necessity. There is an amount of time that passes from when you floor your diesel engine to the point where it starts to build a fair amount of boost (say 10-15 psi). This time period is called turbo lag.
To reduce turbo lag, Dodge and other manufacturers started using much smaller exhaust housings and wastegating their turbochargers by diverting exhaust gases around the turbine wheel. The smaller exhaust housing would help the turbo spool up quicker, while the wastegate would allow excess drive pressure to be bled off once the turbo was up to speed. When diesel trucks are modified to produce more fuel or higher rpms, the amount of exhaust gases can exceed the capacity of the internal wastegate. If this is the case, a larger exhaust housing can be fitted, or an external wastegate, mounted in the exhaust manifold, can be added to the turbo system. It should be noted that not all turbochargers are wastegated. In competition applications such as sled pulling, the engine may only be operated in a very narrow operating range (say, 3,500-5,000 rpm). If drivability is not a concern, these racing engines can get away with non-wastegated housings and still have a favorable boost-to-drive pressure ratio.

View Photo Gallery | 5 Photos
Photo 5/5   |   This is a picture of what's left of a turbocharger that has had its compressor wheel explode. The turbocharger was destroyed as a result of overspeeding--too much nitrous was used (which significantly increased drive pressure) without proper wastegating.
How Does A Turbocharger Fail? When Do I Need A New One?
The most common problem that leads to turbo failure is when people try to push the stock turbocharger way past its limits, and either the shaft fails, or the compressor explodes. Both of these situations are usually a result of overspeeding the turbocharger due to excess drive pressure. Installing an external wastegate will relieve the drive pressure, but you still may have more fuel than air. In this case, it is time to step up to a larger-inducer-size turbocharger. Most stock turbochargers are good to about 400-500 horsepower. Beyond that, wastegating, and/or installing a 62mm-71mm inducer turbocharger (depending on your application) is a sure bet to make reliable power.
Variable Geometry Turbos, Water-Cooled Housings, And More
As technology marched on, new ways were found to improve the durability and efficiency of the modern turbocharger. Many turbochargers are now water-cooled for greater durability, and the need for an ever-quicker spooling turbo has introduced variable geometry turbochargers to the marketplace. Variable geometry turbos (also called variable vane turbos, or abbreviated as VGTs or VNTs) have small vanes mounted on the frame that will open and direct exhaust gases toward the turbine during low rpm operation, helping the turbocharger spool quicker. The exhaust gas also hits the vanes at nearly a right angle, which effectively leads to a reduced-area housing, which also helps spool up and often eliminates the need for a wastegate. The new 4.5L Duramax is a good example of an engine that uses a variable geometry turbocharger in place of a wastegate. DP