How To: Rebuild Your Own Turbo

We Replace The Bearings and Bolt On a New Compressor Wheel 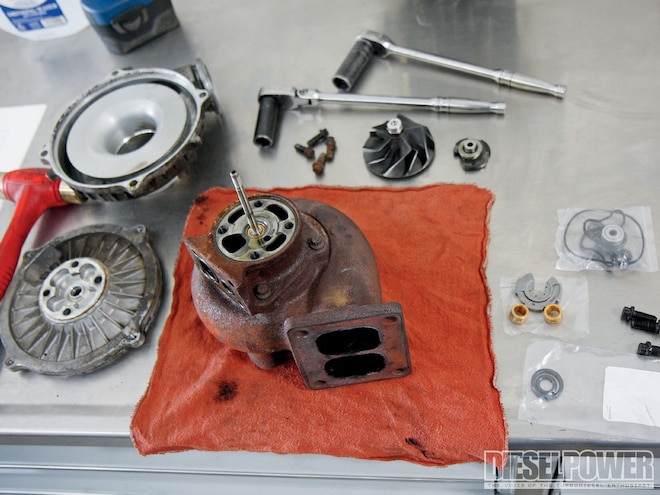 Turbochargers are expensive. There's no denying that. Even an OE replacement can cost you up to $1,000. But, if your diesel engine needed new piston rings and a simple rebuild, you wouldn't swap in a whole new motor, would you? Much like aging diesel engines, the turbochargers equipped on them don't have to be thrown away when they need a little freshening up, they can be rebuilt easily, and on the cheap.
View Photo Gallery | 16 Photos
Photo 2/16   |   On the lower right, you can see the Garrett turbo rebuild kit from BECS Pacific (GTP38 Kit), which included a new thrust bearing assembly, back plate seal, brass journal bearings, and piston ring seals. The compressor wheel was also replaced with a stock replacement (Schwitzer PN 170293, which is known to enthusiasts as a Wicked Wheel). Xtreme Diesel Performance also sells this compressor wheel for just $75.50.
Maximum Diesels in San Jacinto, California, was in the process of rebuilding a stock Garrett TP38 journal bearing turbo from a '97 7.3L Power Stroke and let us take a look to see for ourselves how easy it is to do. This is no massive undertaking, as the overhaul can be performed by anyone, takes less than an hour to complete, involves working with very simple mechanical components, and costs less than $200 in parts.
The only tools required are: a 5/8-inch socket, 12-point 8mm socket, 18mm socket, rubber mallet, torque wrench, silicone, snap-ring pliers, and a vise. Follow along, as we've outlined step-by-step instructions for any do it yourselfer willing to tackle this simple task.
View Photo Gallery | 16 Photos
Photo 3/16   |   The rebuild candidate hadn't failed, or even really been abused (judging by the wear on its components). The turbo's compressor housing was secured to the back plate by four bolts, which required a 12-point, 8mm socket to remove them (it's important to use the right tool here, because if you don't use a 12-point socket, you could round off the bolts).
EBV Delete:
While the turbo was off, the guys at Maximum Diesels also removed the exhaust backpressure valve (EBV). The EBV acts as a choke in cold weather and is actuated by oil pressure and according to oil temperature. On cold days, the butterfly will stay closed until operating temperature is reached.
View Photo Gallery | 16 Photos
Photo 4/16   |   diy Turbo Rebuild exhaust Backpressure Valve
To remove it, the two tabs that attach the butterfly valve to the shaft are simply cut off (yellow arrow). You remove the butterfly (red arrow), and then pull the shaft out (blue arrow). A 3/4-inch freeze plug (green arrow) can be pressed in on the other side and used to plug the shaft hole. The pedestal has to be modified as well but is also relatively simple. First, the snap ring is removed, the EBV actuator (rod and spring assembly) is pulled, and then the oil inlet for the EBV actuator can be tapped to accept a 1/4-inch pipe plug. This stops oil flow to the area.
By deleting the EBV you lose the factory cold warm-up option, but with custom tuning (which many 7.3L trucks have) a high-idle option is warm-up enough in cold weather. Plus, gutting the EBV is thought to lower EGT, improve exhaust flow, and provide one less failure point on '941/2 to '03 7.3L Power Stroke engines.