We Get Inside The First Potential 1/2 Ton Diesel Engine 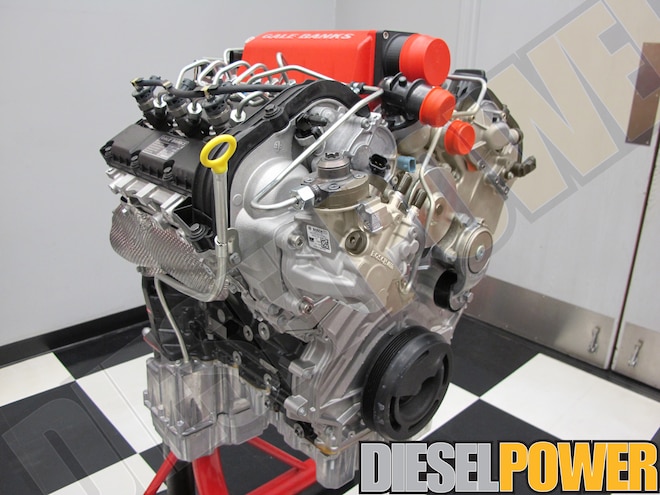 As of press time we have heard word, and seen, that there are spy photos of the 2014 Ram 1500 floating around the internet. Rumor has it that the 2014 Ram 1500 in those photos is equipped with this very VM Motori 3.0L diesel engine. Stay tuned...

"The 630T has the potential to make more than 600 hp in race trim. —Matt Trainham, Banks Powertrain Engineer"

In 2013, the diesels are coming! Our industry is poised to see more diesel-powered vehicles for sale in the United States than we’ve had since 1985. Of the dozen new diesels we expect to be able to purchase, the one powerplant we’re most excited to see is the 3.0L V-6 Jeep is going to offer in the ’13 Grand Cherokee. Why are we so excited about an engine made by the 65-year-old Italian company VM Motori? Well, there are rumors this diesel may also find its way into other Chrysler products, including the Ram 1500.
View Photo Gallery | 34 Photos
Photo 2/34   |   vm Motori Banks 630t Diesel V6 Engine complete Engine
That’s significant because the more vehicles this engine can be adapted to, the cheaper the per-engine cost becomes. Oh, and we should mention one other thing: Fiat (Chrysler’s parent company) owns a 50 percent stake in VM Motori. So Chrysler should be able to keep the costs of this high-tech engine down to a level we can all afford.
No doubt some of you are now asking, “Who owns the other 50 percent?” General Motors does. Could that mean this engine may end up in GM products like the Silverado ½-ton? We think it may. Now you see why we’re so excited.
View Photo Gallery | 34 Photos
Photo 3/34   |   Overall, the Banks 630T version of this engine is a very tightly packaged powerplant that is more power dense than any diesels we usually work with, and that means two things: It’ll make a great swap for vehicles that can’t fit a large truck engine, and whatever this engine goes in it’s sure to be a rocket ship.
Unfortunately, no one at Chrysler or GM can talk about future products on the record. So we’ve never been able to see or drive a vehicle with this 3.0L V-6. That is, until we got a call from Gale Banks Engineering’s Banks Powertrain division. Banks has been working directly with VM Motori to engineer its own version of the 3.0L, codenamed the Banks 630T, for use in military and other specialty-use applications. Needless to say, we grabbed our cameras and headed over to Banks’ Azusa, California, facility. Check out what we saw.
Inside The Banks 630T V-6 Diesel
DISPLACEMENT: 3.0L (182 ci)
CONFIGURATION: 60-degree, even-fire V-6
ENGINE WEIGHT: 498 pounds
BORE AND STROKE: 83 mm x 92 mm (3.26 in. x 3.62 in.)
COMPRESSION RATIO: 16.5:1
ENGINE BLOCK: Compacted-graphite iron (CGI) casting that weighs 159 pounds, featuring four 14mm head bolts per cylinder
BEDPLATE: A one-piece, 35-pound assembly retains the crankshaft and ties the bottom of the block together with six 12mm bolts per main bearing
CRANKSHAFT: Forged 4140 steel with 74mm (2.91 in.) main bearing journals and 67.5mm (2.66 in.) connecting rod journals, externally balanced
CYLINDER HEAD: Aluminum castings with four valves per cylinder
VALVETRAIN: Dual overhead camshafts (DOHC) with roller finger followers and hydraulic lash adjustment
VALVE SIZE: 28.5mm (1.12 in.) intake, 25.4mm (1.00 in.) exhaust
BASE POWER RATING: 221 to 268 hp at 4,000 rpm
BASE TORQUE OUTPUT: 369 to 421 lb-ft at 2,000 rpm
MAXIMUM ENGINE SPEED: 4,800 rpm
FUEL SYSTEM: Bosch common-rail injection with a CP4.2 pump and CRIN 3.4 solenoid injectors capable of running up to 29,000 psi (2,000 bar) and seven injection events
TURBOCHARGER: Electronically controlled variable geometry with water-cooled ball-bearing cartridge in high-power applications

View Photo Gallery | 34 Photos
Photo 4/34   |   As you read this, Banks is creating its own 268hp calibration for the 630T on an engine dyno. Once that’s complete, the engine will be subjected to a torturous 400-hour NATO durability test to prove this powertrain is ready for combat use. Stay tuned for more on this mighty V-6.
Banks & The 3.0L VM Motori V-6 engine
Since 1976 Gale Banks Engineering has been involved in building and supplying engines to the Military. During those 36 years every Gale Banks Military engine has had one dominant feature; they've all been turbocharged.
View Photo Gallery | 34 Photos
Photo 34/34   |   vm Motori Banks 630t Diesel V6 Engine gale Banks Looking At Sidewinder System On Gm Diesel
And because the Department of Defense is pushing our armed forces to use a single fuel (known as JP-8, which is very similar to diesel), Banks' current programs all revolve around diesel engines.
Banks' current military V-8 programs are based on the 6.6L Duramax long-block with with Banks external components and engine management. Higher power versions use Banks internal components as well. According to Banks, its defense customers use these engines in vehicles up to 30,000 pounds GCWR. Banks has also gotten back to its 6.2L/6.5L roots with a new power upgrade for 6.5L motivated AM General HMMWVs.
But for wheeled-vehicle applications used inrapid surgical strikes, a lightweight and high-speed diesel is required. That’s where the VM Motori engine from Italy comes in to play.
The guys at VM are located in the high-performance automotive equivalent of the Silicon Valley, with Lamborghini, Ferrari, and Ducati close by. The design of its V-6 is intended for firing pressures up to 2,940-psi, and the engine freely revs to 5,000 rpm. VM Motori has a passion for its engine designs, and according to Gale Banks it was, “the excellence of this engine [which]convinced me that it would be a rugged basis for what I have in mind for these new Special Operations vehicles.”
Banks went on to say, “We had first fire in our engine test cells on Friday May 4th, 2012 and my first impression was about the sound...this thing is sweet! The low-end response is excellent and it revs freely, which worries me. We've already designed a high-rpm capable aluminum intake manifold for it but, our Banks AutoMind diesel engine controller is only good to 7,800 rpm in its current form.”
A Banks version of the 3.0L VM Motori V-6 engine will be also be available to the general public as well, according to Banks. “Our initial build will be 240 hp and close to 500 lb ft with an engine weight under 500 pounds,” reports Banks.
When asked what other applications we might see this engine in, Banks told us, “We have a stepped power development plan in the works and racing versions will emerge as well. I can't wait to put one of these things in my '06 Jeep Wrangler!”