A Quick Guide To The Most Overlooked Necessity 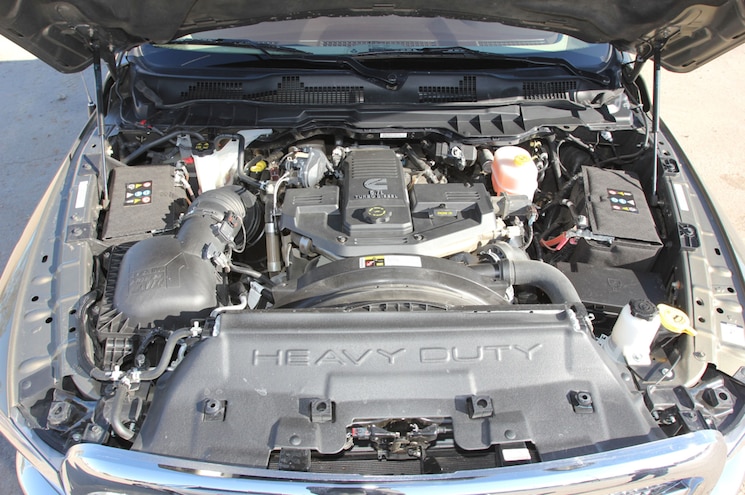 In 1859, a French physicist by the name of Gaston Planté invented the lead-acid battery we all know today. It wasn’t until the early 1900s that the battery was adapted for automotive use, and it was 1912 before the first electric-powered starter motor appeared on an automobile in the United States. While the electri- cal demands of cars and trucks have grown exponentially, the same technology used in the beginning is likely the same as what is under your hood right now.
-- It’s not uncommon for modern diesel pickup trucks to run two batteries, connected in parallel, to handle engine starting along with other auxiliary power needs. Small-displacement diesel and gasoline-powered vehicles will typically only run one battery. --
Batteries are often ignored until there is a problem. However, with a firm grasp of exactly what a battery is and how one works, you’re more likely to have fewer issues and will get greater performance, reliability, and longevity out of the ones you already own.
Battery Types Some of the greatest confusion about batteries surrounds battery type. There are two main types of lead-acid batteries (along with three subcategories): starting and deep cycle. Starting (also referred to as cranking) batteries are de- signed to deliver quick bursts of energy, such as starting an engine, and are designed with a higher plate count. A deep-cycle battery pro- vides less instant energy but can do it for extended periods of time. Deep-cycle batteries typically have thicker plates and can survive more discharge cycles than a starting battery. 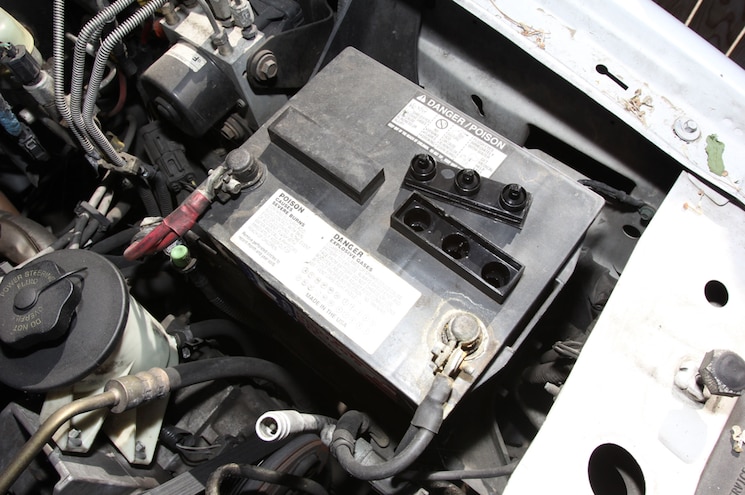 View Photo Gallery | 8 Photos
Photo 2/8   |   The most common battery in use right now is the wet-cell variety. You can easily identify a wet-cell battery by the breather caps located on the topside. In the past, this is where water could be added, however, most batteries sold now are sealed and maintenance-free.
Wet Cell Serviceable and maintenance-free wet cell, or flooded, charged lead-acid batteries are filled with a liquid solution called electrolyte that surrounds negative plates of elemental lead (Pb) and positive plates of lead oxide (PbO2). Electrolyte, which is a solution consist- ing of about 35 percent sulfuric acid (H2SO4) and 65 percent water, causes a chemical reaction that releases electrons that then flow through conductors to produce electricity. Since some wet cells have removable caps allowing access to the electrolyte, a hydrometer can measure the amount of sulfuric acid in the electrolyte. A low reading indicates the electron-making chemistry is lacking, and that the sul- fur is now resting on the battery plates, which in the discharged state are now both lead sulfate (PbSO4). Revival comes through recharg- ing, as the sulfur returns to the diluted electrolyte. The wet cell is inexpensive and long lasting but can leak or spill.
Gel cell This specialty battery is typically much more costly than a premium wet cell, but it stores very well, and the reduced risk of explosion or corrosion makes this battery safer than wet cells. As the name implies, a gelling agent -- actually an absorptive fine powder -- is added to the electrolyte inside the battery case to reduce movement of the sulfuric acid electrolyte. These batteries are sealed and not service-able. They may require a special charging rate to prevent excess gas from damaging the cells and are generally less tolerant of high heat. These are also the least common of the three battery types.
Absorbed Glass Mat (Agm) In this type of lead-acid battery, absorbent fine fiber Boron- Silicate glass-mat separators hold the electrolyte solution like a sponge to eliminate acid spilling while keeping it in constant con- tact with the plates’ active lead material. Some of the more com- mon names for these AGM batteries are: sealed regulated valve, dry cell, non-spillable, and valve-regulated lead-acid (VRLA). Like the gel cell, they are costly but store well, do not tend to sulfate or degrade as easily as wet cells since they are not vented to the atmosphere, and are safer. AGMs are replacing gel cell batteries, as they can take much more abuse. Optima batteries are the most common and well-recognized AGM battery brand.

"Think of a battery like your bank account: If you keep taking out and put nothing in, you’ll soon be left with nothing at all."

Battery Ratings There are a few key acronyms you need to know when talking about batteries. These are the standards by which most companies rate the output and capacity of a battery.
Cold Cranking Amps (CCA):Cold cranking amps is a measure- ment of the number of amps a battery can deliver at 0 degrees F, for 30 seconds, while not dropping below 7.2 volts. This is the most widely known battery rating and is oftentimes used when compari- son shopping. It is important to choose a battery with a high enough CCA rating for the engine you’re starting, and climate you live in.
Cranking Amps (CA): Cranking amps are measured in the same way as CCA, except it is done at 32 degrees F. 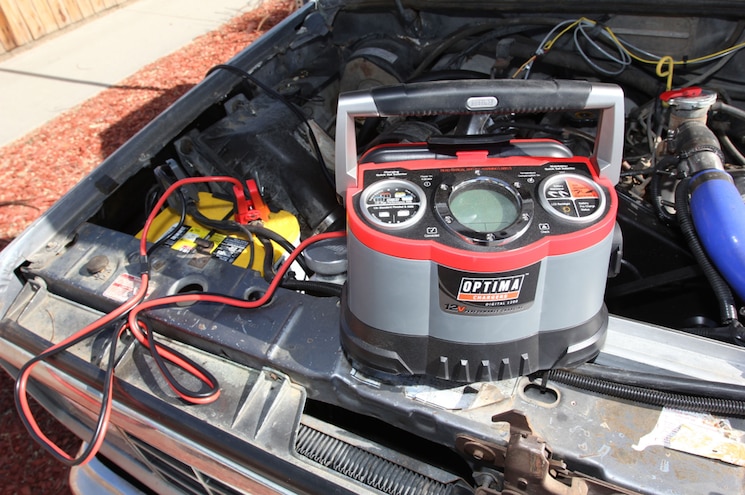 View Photo Gallery | 8 Photos
Photo 6/8   |   Optima has brought to market an excellent charger, the Digital 1200, which is designed not only for AGM batteries but wet and gel cell as well. Along with charging, it also has the ability to test and maintain batteries.
Reserve Capacity (RC): This is a very important rating, espe- cially when shopping for an auxiliary or deep-cycle battery. Reserve capacity refers to the number of minutes a fully charged battery can discharge 25 amps at 80 degrees F until it drops below 10.5 volts. AMP HOUR (AH): An amp hour rating is usually found on deep- cycle batteries and is a rating taken over a 20-hour time span. For example, a 100-amp-hour-rated battery will provide 5 amps per hour for 20 hours (100 amps / 20 hours = 5 amps per hour). However, it is worth noting that total time of discharge and load applied is not a linear relationship. As your load increases, realized capacity decreases. This means if you discharge that same 100 AH battery by a 100-amp load, it will not give one hour of runtime.
Series vs. Parallel More often than not, diesel pickup trucks are equipped with two batteries. This is done to provide the amps needed to turn over the high-compression, large-displacement engine. However, just be- cause there are two 12-volt batteries under the hood does not mean the truck runs off of 24 volts, as is sometimes thought. Diesel pickup trucks run with two batteries connected in paral- lel. Parallel connections will increase current rating, while voltage remains the same. For example, two 12-volt, 10-amp-hour, batter- ies connected in parallel will still provide the same 12 volts, but 20 amp-hours. To link batteries in parallel, connect the like terminals together, positive to positive, negative to negative. 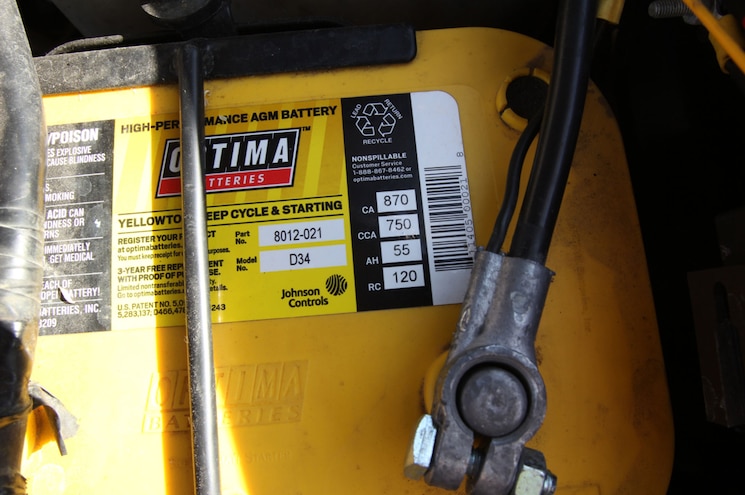 View Photo Gallery | 8 Photos
Photo 7/8   |   You can identify a battery’s cold cranking amps, crank- ing amps, amp hour, and group size by looking on the label affixed to the topside of the battery. This is also where you’ll find the group size and age.
By comparison, connecting batteries in series, positive to negative, will combine the voltage but keep the original amp capacity. If our example above were connected in series, the result would be a 24-volt, 10-amp-hour output. Unless your vehicle was designed to run on 24 volts, such as in the case of a retired military vehicle, connecting batter- ies in series will cause irreparable damage to the vehicle’s electronics.
Jumping And Charging Dead batteries are no fun, and odds are good that we’ve all been there before, be it from leaving the headlights on, listening to the radio too long, or through no fault of our own. Although it’s a grim term, a dead battery is oftentimes recoverable, and generally not at all dead. When battery voltage and amperage drops below the threshold required to start the vehicle, it is referred to as dead, and this typically occurs around 10.5 volts. 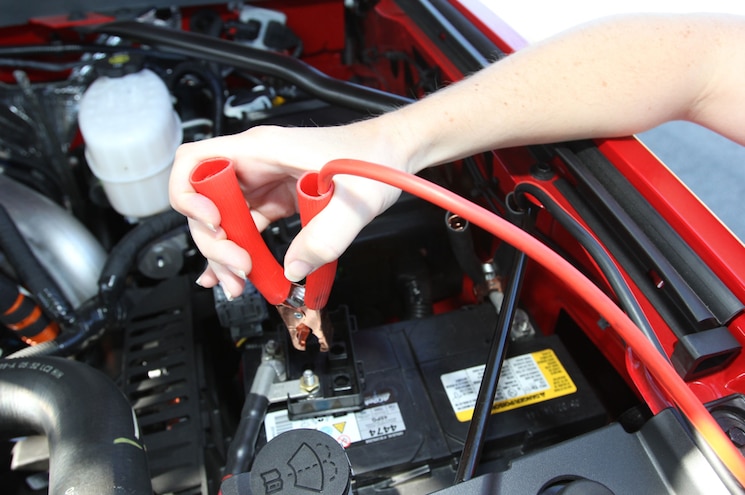 View Photo Gallery | 8 Photos
Photo 8/8   |   When jump-starting a truck, it is wise to follow the manufacturer’s recommendations for how to attach the cables, as some will have a specific location for the ground clamp that is not the battery terminal. If no alternate is provided, simply connect the positive cable to the positive terminal and negative to negative, in that order
When this happens, a simple jump-start from another vehicle is usually all it takes to get back on the road again. With a quality set of cables and another running vehicle, connect the positive leads from the cables to the positive terminal on the battery, followed by the negatives. Wait a moment for the voltages to equalize and then start the dead vehicle. Remove the cables in the opposite order, beginning with negative. Diesel trucks with dual batteries will often indicate which battery they prefer to jump from.
If you can’t get a dead truck started after a couple minutes of jump- ing, odds are the batteries have been drained to the point where they need charging. Charging wet or gel-cell batteries is as simple as plugging them into a standard 12-volt automotive battery charger. AGM batteries, however, may require a special charger if their volt- age drops below 10.5 volts. Low amperage and longer charge times are better for batteries, and a vehicle’s alternator should never be relied upon to charge a dead battery.