You've got questions? We've got answers! 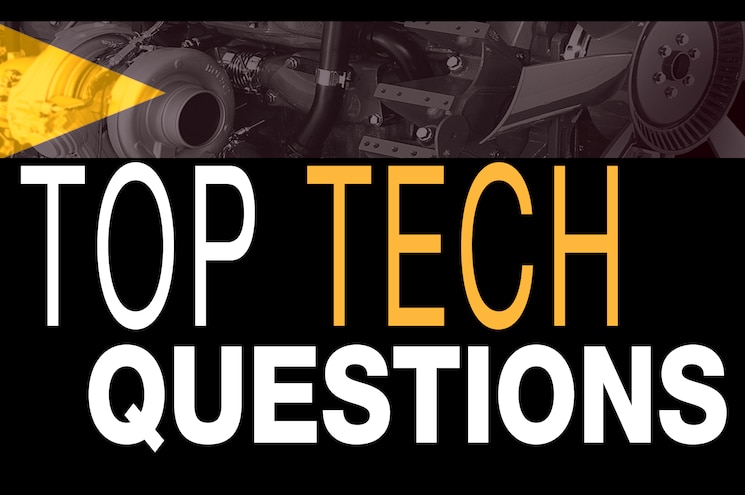 Welcome to Top Tech Questions: MPG Edition. One of our favorite forms of reader communication is tech questions. Our Top Tech section is a place where you ask what’s on your mind, and we answer. Send us an email at dieselpower@sorc.com. and ask away!
FORD VS. GM VS. RAM

Question: I want to know which manufacturer gets better mileage in general, with, say, a 3.73 axle ratio. I’m in the rocess of finding a newer model diesel I can use for pulling a slide-in pontoon boat with a 3,000-pound camper in the bed. Also, does adding horsepower and torque help or hurt mileage? If so, at what point does it hurt the mileage? I would like a 600 to 800hp truck, but not if it affects the mpg to the point that it’s not worth it. I currently own an 2006 Chevy 6.0L gas truck, and 6 mpg is not cutting it. 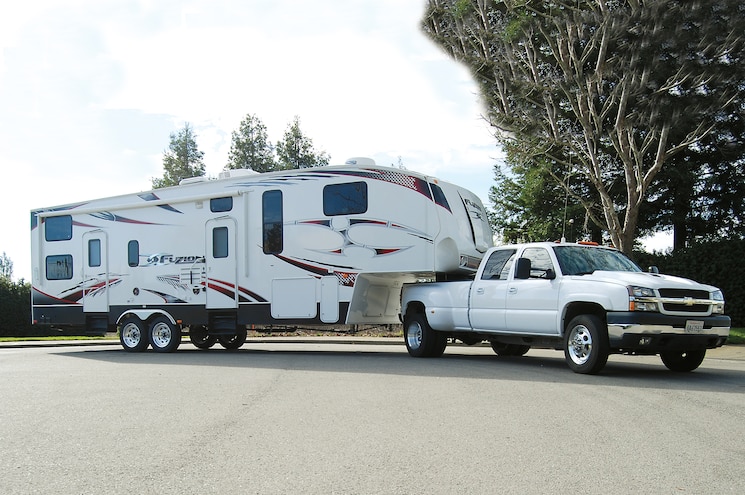 View Photo Gallery | 4 Photos
Photo 2/4   |   2006 Chevrolet 6 0L Gas Truck Front Three Quarter
Answer: We’ve performed a lot of Ford vs. GM vs. Ram truck tests over the years, and in almost all of them, the Chevy/GMC models have edged the other two makes out by 0.5 to 1 mpg during testing -- both empty, and loaded. One of the benefits of newer trucks is their multi-speed transmissions (often with more than one overdrive gear) allow for steep axle ratios (like 3.73s) without sacrificing freeway performance. Adding power and torque to a diesel that’s used for towing has one drawback: You’re going to use it. If you drove the truck the same as you normally would with 400-ish flywheel horsepower, then it would get the same mileage. But, the temptation to use that 600, 700, or even 800 hp to pass slow moving vehicles, tow fast up hills, or just for goofing off is the reason many modified diesel owners will see a mileage drop. It’s not necessarily the modifications themselves that are the difference; it’s the driving style.

Finally, if you were only getting 6 mpg with your gas rig, we would guess that whatever you’re towing isn’t very aerodynamic. Aerodynamic drag plays a huge role in fuel economy, and we wouldn’t expect to see super-high numbers -- even with a diesel. We would hazard a guess that you should see at least 10 mpg while towing the same boat asyour gas truck, and a 66 percent improvement is nothing to sniff at.

Question: I was looking over the results of some of the Diesel Power Challenges from the past years, and I noticed the 6.0L Ford trucks got a lot worse fuel economy on the ride and drive, even though all the other diesels were modified, too. I am in the market for a Ford, and I was curious as to why the 6.0L Power Strokes are so bad on fuel economy even though they have a smaller engine than the previous 7.3L generation. I don’t want to buy a 6.0L if it will only get 15 mpg on the highway. What can I do to make sure it gets closer to 20 mpg? 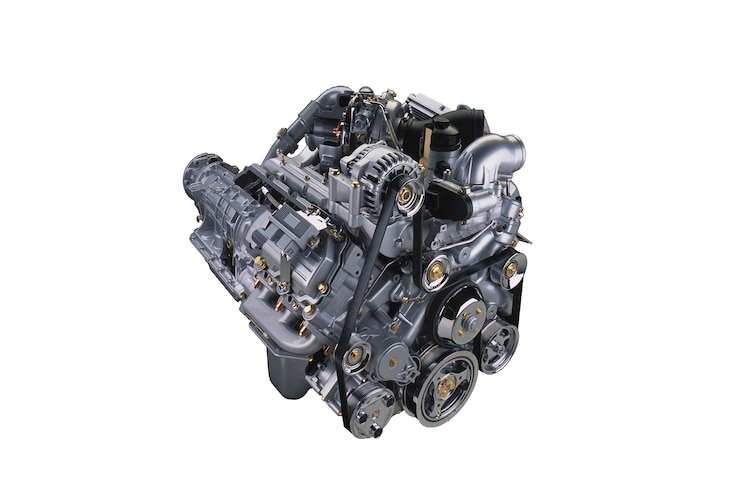 View Photo Gallery | 4 Photos
Photo 3/4   |   Ford Trucks Engine
Answer: That’s a good observation, and it’s something we’ve also noticed over the years. While we have no 100 percent clear answer for this poor mileage mystery, we can tell you what our theories are. We think it’s a combination of things. First, while the HEUI fuel system was efficient enough to meet emissions standards in its day, it isn’t as efficient as modern high-pressure common-rail systems from a fuel economy standpoint. Second, the 2005 (and newer) Super Duty trucks more than likely took a hit in the mileage department when Ford introduced the coil spring, radius-arm front suspension, and a thicker, stronger frame with a fully boxed front section, which entailed the thickest-gauge steel used on a pickup frame at the time. These things added considerable weight to a truck that was already pretty hefty to begin with. It’s typical for a crew cab, four-wheel-drive version to weigh 8,000 pounds or more. By contrast, the Dodge and GM trucks of the same era with the same configuration would weigh at least 400 to 500 pounds less.
Third, the difference between the 7.3L generation you mentioned and the 6.0L is that the 7.3L had more bottom-end grunt, thanks to its cubic-inch advantage. The 6.0L Power Stroke makes its power much higher in the powerband and, frankly, it’s happier at higher engine speeds. The drawback here is that higher rpm means more fuel consumed. Now, add in a larger (possibly even fixed geometry) turbocharger like you see in the Diesel Power Challenge, and the 6.0L loses even more torque and requires more rpm for it to come to life.
To be fair, we have seen some 6.0Ls achieving near 20-mpg numbers, but all of them had factory height, stock-size tire combinations working in their favor. They were all religiously maintained and 100 percent healthy, too. It’s more about what you shouldn’t do than what you should do to see 20 mpg. Don’t lift the truck or add larger wheels and tires. That’s the easiest way to eat into your fuel economy.
TURBO TIPS

Question: I have an 2004½ Dodge 3500 with the 5.9L Cummins engine, and I recently had the thrust bearing on the turbo fail. I replaced it with a Garrett PowerMax Stage 3, thinking it would help EGT under wide-open throttle conditions, and it definitely has. My concerns are about cruising EGT and fuel economy. Since installing the turbo, I have lost about 2 mpg, and my cruising EGT has gone up by nearly 200 degrees! I want to keep the power and wide-open EGT capabilities of this turbo, but I need my mileage back. Is there anything I can do? 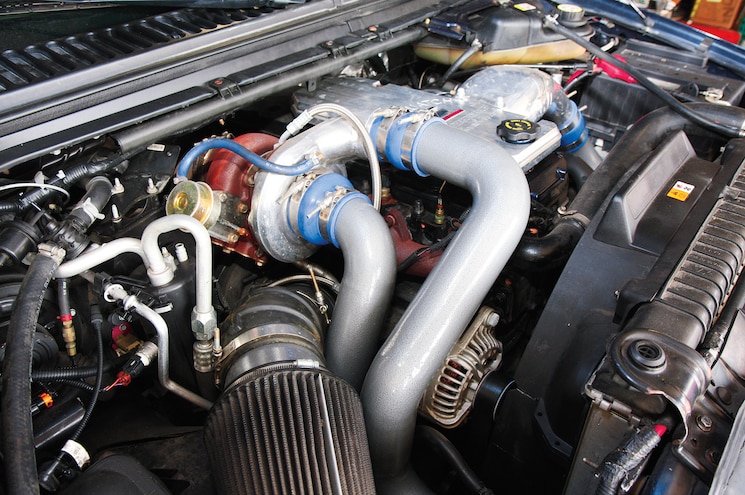 View Photo Gallery | 4 Photos
Photo 4/4   |   2004 Dodge Ram 3500 5 9L Cummins Engine
Answer: We initially thought you’d fallen into the “if it has more lag, it must be better” trap. With turbochargers, it’s all about engine efficiency, and a turbo that’s better suited for wide-open throttle use at high rpm might not be suited for low-rpm cruising, just as a smaller turbo that’s suited for low-rpm cruising might not work well for high-rpm power.
Like an engine, a turbo has an operating and efficiency range. With a larger turbocharger, that range is shifted higher up into the powerband. This means at the low-rpm cruising speeds that most are used to, a larger turbo just won’t be as efficient. People think turbochargers are geared toward peak power from the factory -- but they’renot. Mileage and throttle response are just as much of a concern as power and torque ratings.
Looking a little closer at your turbo specs, it seems as though you may still be in the ballpark. A Garrett GT3788R has a 63.5mm inducer, which isn’t all that large for the displacement you’re running. Certainly, it’s small enough that good fuel economy should still be a viable option. If we had to guess, we’d say you currently have an exhaust housing that’s too large for low-rpm efficiency. The Garretts come with either a 1.11, 0.99, or 0.89 A/R ratio, and it’s our guess that you have one of the larger housings on the turbocharger. With the 0.89 A/R ratio housing and ball-bearing design, the Garrett turbo should be able to perform very close to the stock turbo mileagewise -- but will have a lot more breathing room at the top of the rpm range.
DURA-MAXIMUM MPG

Question: I have an 2009 GMC Sierra 2500HD with a Duramax engine and Allison six-speed automatic. I have 50,000 miles on it now and am very pleased with the performance. I am not looking to hot-rod the truck. It pulls my 12,000-pound, 30-foot, fifthwheel pretty well. I do have a fuel mileage question, though. My fuel mileage empty, with straight and level freeway driving, is averaging 21.5 to 22.8 mpg. In town, I get 17 to 19 mpg. Pulling the trailer, it drops to about 8.5 or 9 mpg on the freeway. Any thoughts?

Answer: This one had us a little perplexed because of the drastic difference between towing and non-towing fuel economy. For freeway and around-town mileage, 17 to 23 mpg is excellent and is about what we have seen with our own Duramax projects. When moving on to towing, however, 8 to 9 mpg isn’t all that great -- especially if it is flat ground. Our experience with towing a trailer at ludicrous speeds (see “141.998 mph With a Trailer” Feb. 2013) has taught us just how important aerodynamics are. It’s our guess that the speed at which you are towing combined with a pretty un-aerodynamic trailer is what is leading to the poor fuel economy while towing. Remember those big wings you used to see on the top of a truck’s cab in the ’80s and ’90s? Well, it turns out those things actually worked, by directing air up and over the camper trailer at speeds. Unfortunately, there’s not much to do, aerodynamically speaking, if your fifth-wheel extends over the cab of your truck (like many current designs do). The only way you’ll drastically improve your fuel economy is by slowing down.

- OF
By Diesel Power Staff
126 Articles