Gauges, Monitors, and Data Loggers for Your Diesel - Basic Training 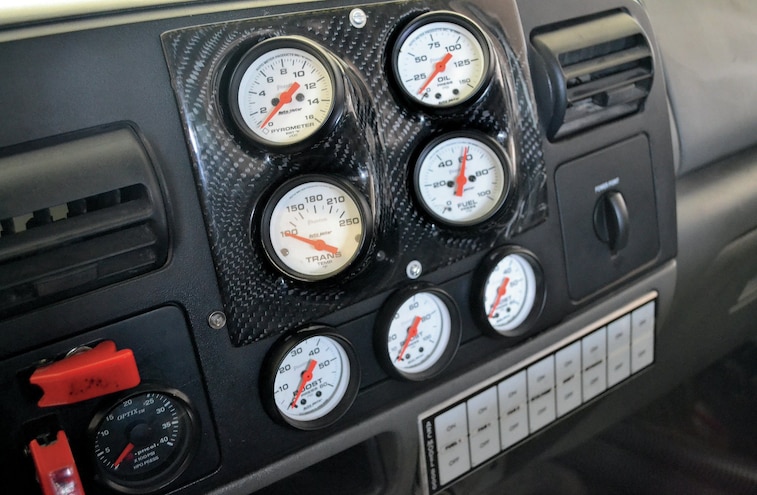 The operating status of most of today’s diesel engines is typically monitored by a truck or car’s factory computer. Boost, exhaust gas temperature, fuel-rail pressure, and myriad other engine parameters are constantly being captured. However, their values usually go unknown to drivers, thanks to the limited amount of data categories the OEM instruments can display. Some of this unseen information is critical, so having some method of keeping tabs on what’s happening inside a vehicle’s engine is really important.
Aftermarket gauges, programmers, and monitors are the keys to uncovering a diesel’s operational secrets. It doesn’t matter what the vehicle is, gauges are an integral part of diesel performance—especially when engines are modified far beyond the factory power levels. In many cases, adding fuel is the way most PCM tuners dial in additional power, and doing so makes EGT, boost pressure, and fuel-rail pressure important concerns. Being able to monitor all these values can ensure optimum performance without the risk of melted pistons, blown-up turbochargers, or excessive smoke. 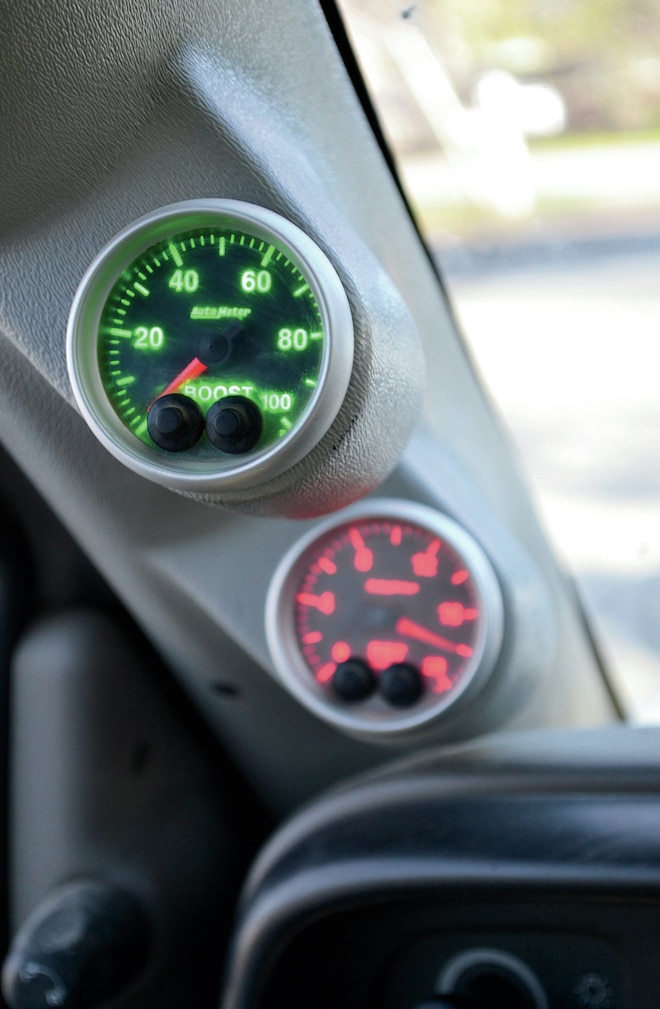 View Photo Gallery | 18 Photos
Photo 2/18   |   Whether you’re using an analog gauge set or a monitor, having a warning feature can be tremendously helpful in preventing engine damage. These cool Auto Meter gauges have a peak recall feature and can be set up to flash a bright warning light (in this case, red) if a user-defined limit is exceeded. They can also be used to trigger other systems such as nitrous or water-injection at predefined levels.
Analog Gauges
Perhaps the simplest and most time-honored way of monitoring an engine’s performance is via analog gauges. These gauges present hard data taken directly from the engine. In other words, boost readings must be taken from a spot in the intake tract, exhaust gas temperatures require a probe installed in the exhaust manifold, and so on. Since the A-pillar is already a blind spot on trucks, it serves as a convenient place to mount these types of gauges, as they are readily viewed, yet not in the way.
When it comes to selecting gauges for trucks, there’s a wide variety available. In addition to the aforementioned instruments, there are also gauges that monitor fuel pressure, oil pressure, transmission temperature, and virtually every other basic engine-related parameter imaginable. If you’re worried about keeping track of the major pressures and such that can lead to engine damage, reliable analog gauges are where it’s at.
Monitors
Monitor style–gauges are arguably the most popular data-presentation devices currently being used by diesel enthusiasts. The instruments feature a small screen to display information that’s drawn from a vehicle’s OBD-II port. One of the main reasons why this type of display is popular is because it’s easy to use. Virtually all monitors are plug-and-play (plug it in, mount it, and you’re on your way). 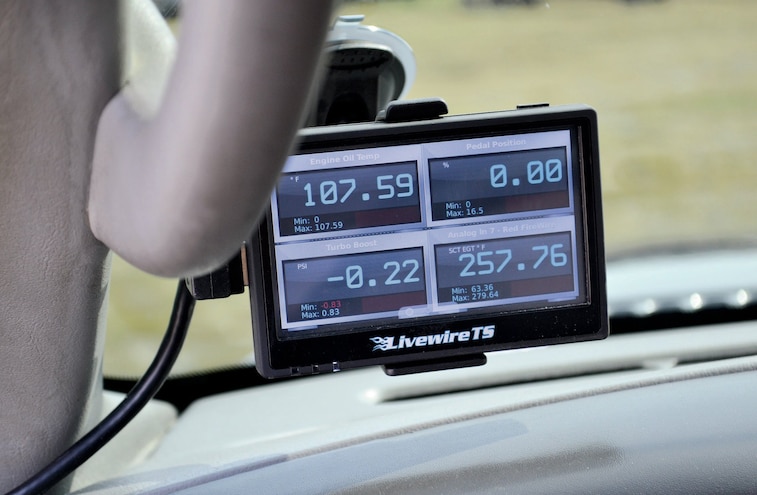 View Photo Gallery | 18 Photos
Photo 6/18   |   Programmer/monitor combinations are good solutions for those who have electronically programmed diesels and want a little more power as well as extra monitoring capabilities. Notice that this SCT Livewire TS (above) monitors engine oil temperature and throttle position, which shows how flexible these type of monitors really are.
Monitors receive data from the same sensors that provide signals to a diesel-powered car or truck’s PCM and can present a multitude of readings. Since dozens of options are available, the gauges allow for a rotating display. Worried about coolant temperature? Put it front and center on the monitor. For racing, you can prioritize boost pressure and EGT. Have a speeding problem? Make mph the main display.
In addition to engine and transmission information, most monitors have a variety of other functions, including backup cameras, diagnostic trouble code clearing, and 0-to-60-mph times—and some can even play videos and MP3s. These super-gauges are available from a variety of suppliers, such as Edge, Banks Power, and SCT.
Programmer/Gauge Combos
Since monitors plug into a truck’s computer through the OBD-II port, there’s also an opportunity to change the PCM programming itself using electronic gauges that have tuning functionality. 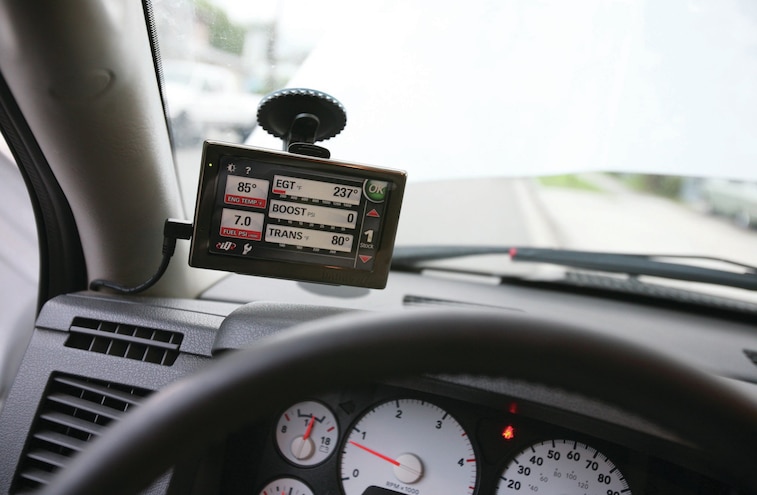 View Photo Gallery | 18 Photos
Photo 10/18   |   The Banks Power iQ is another example of a monitor that’s much more than just a simple OBD-II reader. The iQ allows users to read and clear trouble codes, measure performance, and even play videos, right on the monitor.
For example, many tuner/gauge combos offer features that will pull back fueling at a prescribed EGT in order to protect the engine. If you’re the type who likes towing with your foot to the floor, these gauges/programmers might be for you.
Another advantage of tuners/monitors is that they offer very easy adjustments for activities that might require different power levels such as towing or sled pulling. A simple touch of the screen is usually all that’s required to change tunes, and it’s a lot easier than driving with a bulky programmer in the glovebox or center console all the time.
Alarm and Recall Gauges
For those in competition, recall and alarm gauges can be just the ticket for keeping an engine or drivetrain alive. Monitors and analog gauges are both available with recall and/or alarm features. While some use an audible buzzer to warn the driver that a preset limit is being surpassed, others will change color or flash warning lights. With sled pulls or drag races lasting just a few seconds, having a warning light that activates rather than trying to keep an eye on a sweeping dial lets the driver pay much more attention to driving. 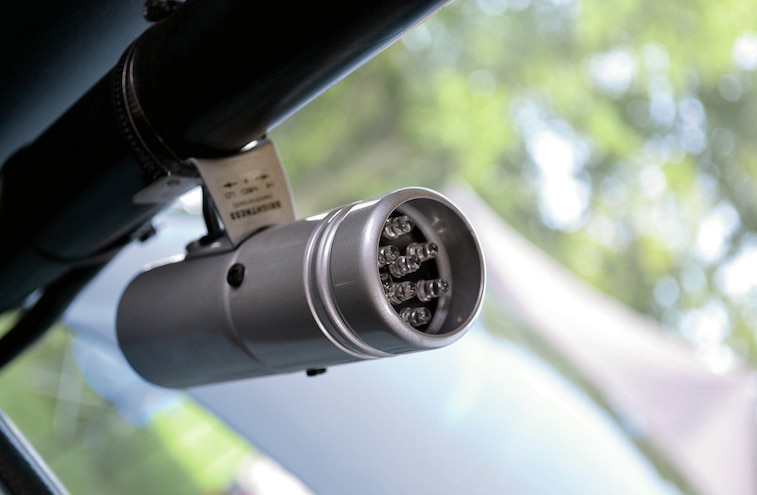 View Photo Gallery | 18 Photos
Photo 14/18   |   A lot of gas vehicles use shift lights, but we’ve seen them used for diesels, too. With a little ingenuity, nearly anything that’s designed for a gas rig can be adapted to diesel vehicles.
Data Loggers
Even the hottest street trucks usually don’t use data loggers, as their price usually puts them out of the range of even the most hard-core enthusiasts. With competition vehicles such as sled pullers, though, data loggers made by Corsa, Racepak, or TS Performance are in widespread use. A data logger allows the end user to monitor virtually anything (with the correct sensors), including turbocharger speed, driveshaft rpm, individual cylinder EGT, and more. Many race data loggers also include a G-meter, which can be used to measure how changes directly affect a vehicle’s acceleration. 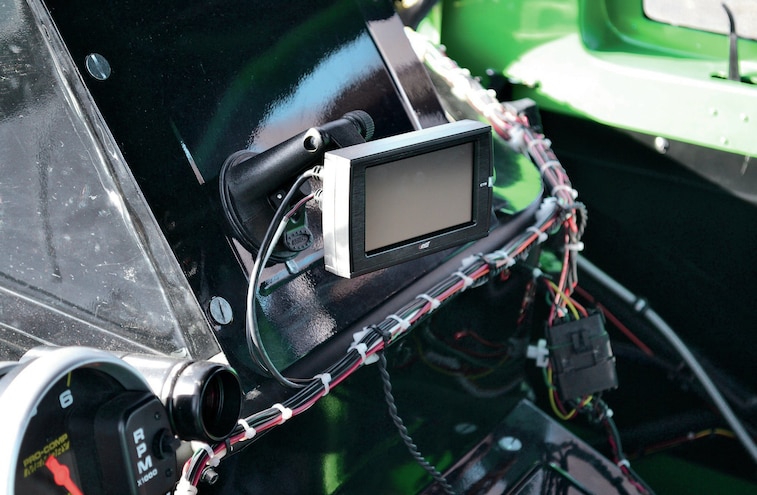 View Photo Gallery | 18 Photos
Photo 15/18   |   Perhaps the most popular aftermarket solution for engine monitoring is a device like the Edge CTS, which can be used for data logging or as a backup camera, in addition to recording engine functions. Although monitors are more popular on newer rides, they can also be used on older mechanical models.
So, What Should You Buy?
Determining what kind of data-display system you need for your car or truck is largely dependent on how you use the vehicle. If you do a lot of towing, a single EGT gauge might be all you need to ensure the safety of your truck’s engine. If you spend a good amount of time at the track using your truck either for sled pulling or drag racing, then a monitor system that captures boost, EGT, and transmission temperature (for automatics) values is a good start. If you’re a competition guy at any level, we’d go for a data logger or monitor that has data-logging capabilities.