You’ve got Questions? We’ve got Answers! 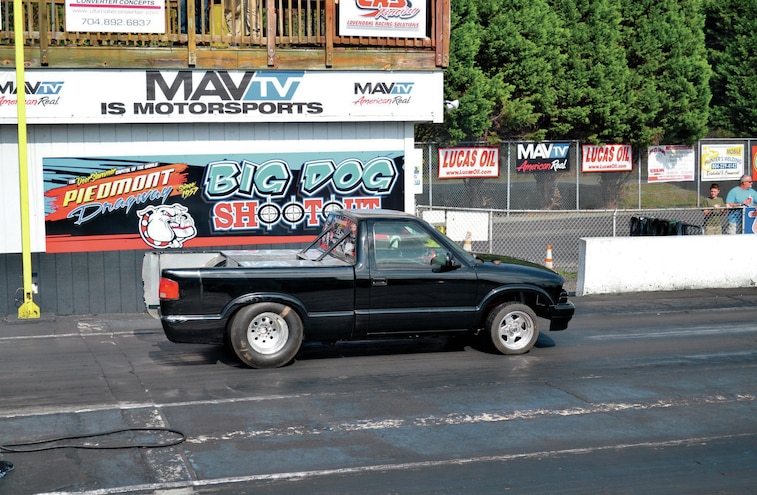 Welcome to Top Tech Questions. One of our favorite forms of reader communication is tech questions. Our Top Tech section is a place where you ask what’s on your mind, and we answer. Send us an email at dieselpowertech@enthusiastnetwork.com and ask away!
Turbocharger Matching Questions
Question: I need some advice about turbocharger selection for my truck. It’s a ’98½ Dodge Ram 2500 with a 5.9L Cummins 24-valve and manual transmission. The truck is already equipped with a BorgWarner S300G turbo (57mm/64mm/0.80 A/R), 4-inch Magnaflow exhaust, ATS Diesel Performance exhaust manifold, aftermarket air filter, 150hp Mach IV injectors, and a M.A.D.S. Smarty JR tune. I added a FASS Titanium 150-gph lift pump, a Banks Power Monster intake, and a Fluidampr balancer.
Now the turbo shaft has some play, so I’m wondering which new turbo I should buy. It seems to me the S300G does not produce enough air for the 150hp injectors because there is a lot of black smoke when accelerating from less than 1,800 rpm with the higher Smarty programs. I want to take the next step up on the power ladder but don’t want to deal with slow spooling. I also don’t want to run more than 40 psi of boost, because I still run the original head studs. So, I’m looking at a variety of turbos: a 62/65/0.80, a 62/65/0.70, and the 63/65/0.80 Killer B from BD Diesel Performance. I was wondering, is there any big difference in power, torque, or spooling between these turbos, or are they basically the same?
Friedrich Wagner
Rosenheim, Germany 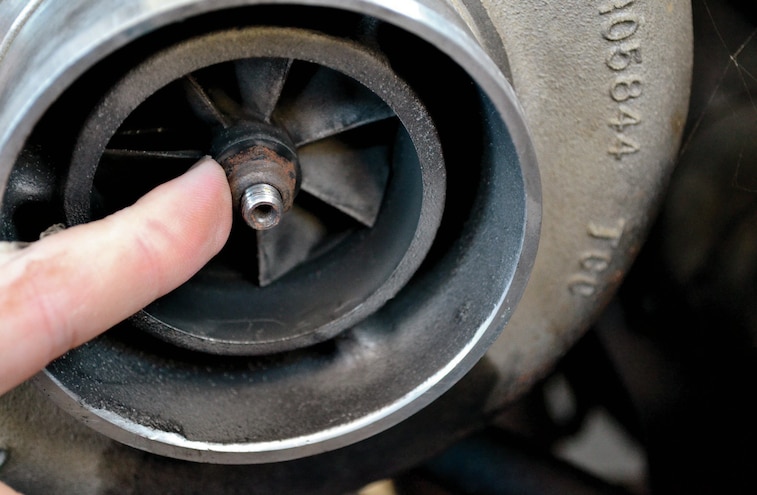 View Photo Gallery | 4 Photos
Photo 2/4   |   Before you run out and buy a new turbocharger, understand that quite a bit of side-to-side play is acceptable. Usually, when a bearing goes south, the turbo will have a lot of wiggle room back toward the downpipe, and forward toward the intake.
Answer: It sounds to us like you have a common desire among diesel enthusiasts: less low-end smoke, better response, and more overall power. We’ll start with the smoke, since VP44 trucks like yours have a rotary pump that’s famous for fueling hard down low in the rpm range. First off, most of your low-end smoke issue is coming from the fact that you’re using tuning that adds a lot of fuel at low rpm to help spool the turbocharger (at higher levels), along with larger injectors, which also add fuel across the entire rpm range. The combination of the tuning and injectors results in a lot more fuel than is necessary at the first hit of the throttle, resulting in quite a bit of smoke. This is a common issue among diesel enthusiasts with tuned trucks, no matter what year, make, and model they are.
Fortunately, there is a pretty simple fix to cut down on low-end smoke: simply rev the engine higher. Your VP44-equipped Cummins should be able to still make power up to 3,500 rpm without any issue, which will drastically reduce smoke after gear changes, since the engine will always be beyond 2,000 rpm when accelerating. Even with a small 57mm turbocharger, the amount of boost it will be able to make in the 1,600- to 1,800-rpm range is limited, and you won’t really see full boost at full throttle until about 2,200 rpm. While most drivers have a tendency to lug diesel engines because that’s when they “feel the best,” exceeding 3,000 rpm before shifts is more than acceptable when trying to keep power up and smoke down.
Next is your turbo-selection question, which falls under the “more-response-and-power” category. Before you make a choice, however, keep in mind that a 57mm turbocharger with a smaller turbine and exhaust housing (like the ATS Aurora 3000) will still be able to produce 450 hp and have very good response down low. With that being said, there is a greater power potential in the 62 to 63mm range, which can produce 500 to 550 hp on a hot VP44 engine. Keep in mind, however, that the larger turbo will spool slower and actually make your low-end smoke problem worse, which is why we mentioned the driving style changes first.
When it comes to turbo selection, size is important, but so is wheel design. There is a crop of new turbochargers specifically designed for the high pressure ratios of diesels, all of which have advanced and higher-flowing wheels. Deciding between a billet or forged-milled-wheel turbo with a wastegate, and an older, non-wastegated cast-wheel turbo really is a matter of desired performance and personal budget. The advanced turbo will flow more and have better control of boost via the wastegate, but it will also be more expensive.
With your current modifications, however, you definitely have enough fuel for a 63/65/0.80, so based upon a revised shifting strategy, that’s what we’d recommend. A turbo like the BD Killer B is also wastegated, which can give you that 40-psi limit you’re looking for. Finally, we’ve actually talked to a few owners who have run the 63/65 setup on 12-valve and 24-valve Cummins engines, and we’ve heard no complaints.
Runaway Fears
Question: I’ve installed new heads, head studs, an oil cooler, and new injector seals on my ’04 Ford F-250’s 6.0L Power Stroke engine. In the process of all the repairs and watching how-to videos, I stumbled across a video of a 6.0L “running away.” It freaked me out watching and hearing the rpm shoot to the moon and eventually lock up the engine. My question is: What causes this, and what should I do to make sure this doesn’t happen to me?
Cory Dente
-Via email 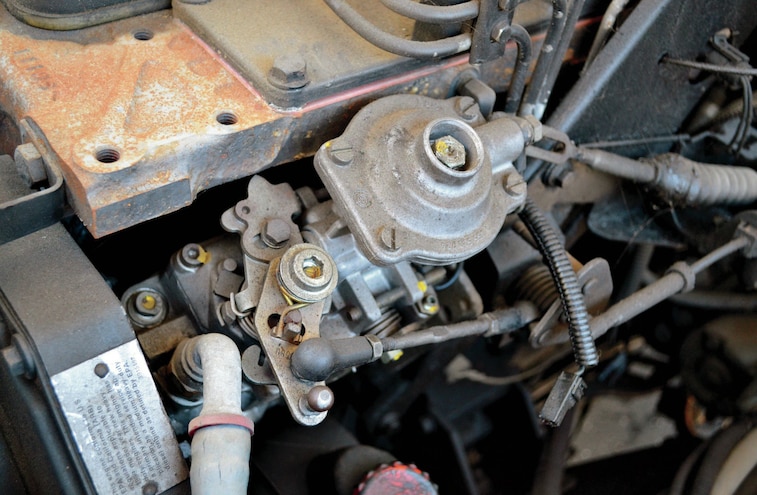 View Photo Gallery | 4 Photos
Photo 3/4   |   Runaways are very uncommon for modern diesel engines, although if they do occur, it’s usually on ’89-to-’93 VE-pumped Cummins powerplants that have had their fuel screws turned in a bit too far. If this happens, the pump will run up against the governor and hang open, when the engine is revved up to about 3,000 rpm. And if the fuel screw is turned in any further, the engine will eventually take off in a runaway.
Answer: Thanks to the popularity of YouTube and the Internet, runaway diesel engines have become a somewhat popular and scary subject. Fortunately (for all of us), the occurrences are very, very, rare, and happen just about as often as seeing a gasoline-powered car catch fire and explode (which is probably also available on YouTube).
Unlike a gasoline engine, a diesel engine uses fuel rather than air to control rpm, so if an unlimited amount of fuel is available, then the engine will try to spin an unlimited amount of rpm, which is bad. Given the large amount of air diesel engines are able to take in, most can rev to limits that range between 5,000 and 8,000 rpm, which is still plenty hard on parts and will eventually cause the engine to self-destruct. But what causes a runaway?
Well, there are a couple different ways a runaway situation can occur. The two most common are a diesel-fueled runaway and an oil-fueled runaway. In a diesel- fueled runaway, things like a stuck rack can cause the engine to scream to the moon, but fortunately, diesel runaways mostly occur on older mechanical engines, which has little to do with a modern powerplant like your 6.0L.
The most common type of runaway on a modern diesel involves turbocharger issues. A diesel can actually run on multiple types of fuels, like grease, oil, or transmission fluid, so if a turbocharger fails and oil gets into its compressor side, the engine will run on the oil entering the compressor—and continue to do so until the engine is completely out of oil. At that point it will stop, but the damage from the engine rpm (and now, lack of oil) will already be done. Fortunately, these types of turbo failures are very rare and, in most cases, a bad turbo seal or bearing will just send oil out of the exhaust.
If you’re still worried about a runaway, shutting off the air to the turbo is basically the only way to stop it. You can incorporate an air shutoff valve or guillotine into the intake system, which preferably can be closed from inside the cab. Being around a screaming diesel is very dangerous, and while we’ve heard of people stopping runaways with boards, blocks, or by throwing jackets into the intake, we’d never recommend that (especially the jacket part).
Keep in mind that although a diesel engine can continue running by sucking oil and air past the rings, it will just be barely running. Also keep in mind that in all our collective years around diesels, we’ve only seen one true runaway situation, so the chances of it happening to you are very slim.
Super-Diesel
Question: When are we going to see a diesel supercar? Yes, 400 hp and 800 lb-ft is all good in an 8,000-pound truck, but I’d rather have one of those engines in a 2,800-pound car! And think of the fuel mileage! If a huge truck can get 20 mpg, then a small aerodynamic car should get 40 mpg it seems. I’ve heard about one being in development over in Europe (with a Duramax engine) for years, but nothing seems to come of it.
Ryan Marksman
Burbank, California

View Photo Gallery | 4 Photos
Photo 4/4   |   Although we haven’t seen a true diesel supercar out there yet, we’ve seen plenty of folks who have taken the initiative to build their own lightweight cars and trucks (like this 5.9L Cummins-powered Chevrolet S-10) that are capable of awesome performance, thanks to having about 3,000 fewer pounds than any current large-displacement diesel engine you can buy.
Answer: We understand exactly where you’re coming from. While there are a variety of supercars out there with engines in the 500 to 700hp range (which a diesel can easily do), their mileage usually hovers around the 9- to 13-mpg mark, which isn’t so exciting. Sure, some can break 20 mpg in double Overdrive on the highway, but remember that a bone-stock diesel truck can do that, too—with 4,000 more pounds and twice the aerodynamic losses. So why don’t we see a diesel supercar? Well, there are a few roadblocks.
First and foremost, most of the diesel engines that can make good power are absurdly heavy compared to their gas counterparts. A fully dressed Duramax engine weighs more than 800 pounds, depending on its turbocharger arrangements, versus 444 pounds for a gas-powered 5.0L V-8 Coyote engine with similar power. The 366 pounds is a huge difference, especially when it’s over the nose of the car—exactly where you don’t want it for braking, handling, or acceleration. To make matters worse, diesels also require heavy exhaust systems with multiple emissions devices, again, exactly what you don’t want when building a supercar.
Finally, the diesel engine’s torque is exactly what’s needed to get big trucks and trailers moving, but it also requires very strong (and again, heavy) driveline parts. Breakage isn’t something you want on a bazillion-dollar supercar, and building a transmission that will withstand better than 1,000 lb-ft of torque is unfortunately hard to do while keeping things light.
Add up the extra exhaust weight, engine weight, and driveline weight, and you’re looking at hundreds upon hundreds of extra pounds, which means more power will be needed, which then means extra weight—and the vicious cycle continues. Bottom line: Diesels just don’t seem like a match for supercars, although we wouldn’t count them out if someone builds a lightweight and ultra-strong diesel engine in the future.