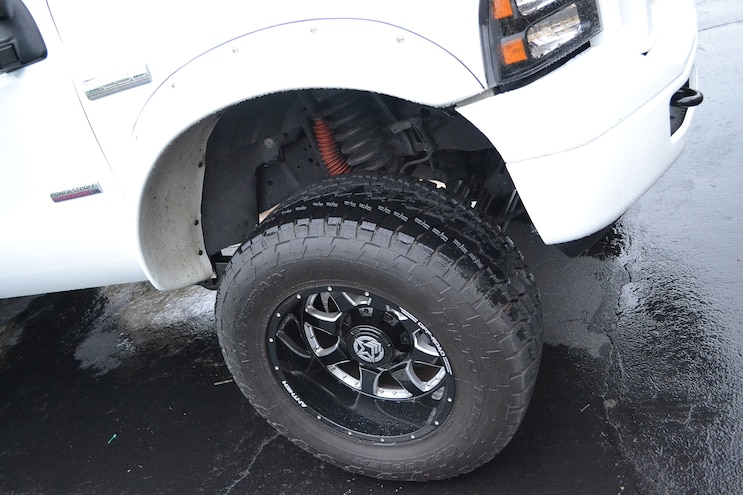 View Photo Gallery | 4 Photos
Photo 2/4   |   001 Top Tech Fender Flares
Whether you have a two-wheel-drive or four-wheel-drive truck, fender flares and body trimming are excellent ways to clear bigger tires while still being able to turn lock to lock.
Lifted Two-Wheel Drive
I'm restoring a ’90 Ford F-350 two-wheel drive, and I'm looking to install a lift kit that will allow the truck to clear 35-inch tires. The rear axle is easy to do, but the front is the hard part because it’s a twin I-beam IFS with coil springs. I have found some 2-inch-taller springs that are rated at 5,000 pounds, and I’m wondering: Will that be tall enough? Is there a company out there that makes lift kits for my truck? So far, I've come up with nothing.
Jacob F.
-via email
Installing larger wheels and tires is still a popular upgrade for the two-wheel-drive crowd, especially for those who are hoping to update an older truck’s appearance. While there are lift systems available for the Super Dutys, folks with older diesel Fords may be left out. For details on this, we contacted Autofab in Santee, California. The company is known for lifting a few early two-wheel-drive diesel rigs that were used as chase trucks for desert racers, and technicians tell us that most of those kits used custom springs, and a 4-inch lift was usually needed to clear 33-inch tires.
With that in mind, there are a number of modifications that can help you achieve the type of stance you're looking for. The spring swap sounds like a good idea, and a couple of inches really won’t alter the suspension’s geometry that much. We would add to that a small body lift, cut the fenders, and add flares in order to properly clear the 35-inch tires you want to use.
With this combination of suspension and body lifts and slight body modifications, the F-350 should still ride and handle well, while still being able to support the larger-diameter tires.

View Photo Gallery | 4 Photos
Photo 3/4   |   002 Top Tech Rat Rod 62 Turbo
It doesn’t matter if your project vehicle has a bunch of underhood space (or no hood at all, like this dual-turbocharged rat rod with a 6.2L GM diesel engine), building your own turbo system is a great way to bring uniqueness to your rig.
Just Say NO to Gas Engines!
I might be getting a Chevrolet K10 Blazer with a non-turbocharged diesel engine in it, and I was wondering whether a turbo can be installed on this engine. The powerplant is in good shape, but it's very weak. I was thinking about replacing it with a 350ci gas engine if the turbo won't help. Any insight you might have would definitely help.
Tony Ward
-via email
We certainly won’t tell you to put a gas engine in that Blazer, but there are a few options and other diesels you can consider.
The first option is turbocharging the 6.2L diesel. However, keep in mind that naturally aspirated powerplants have much higher compression than turbodiesels. You will only be able to force a small amount of boost into the engine before experiencing head gasket trouble, or worse.
Banks Power is one of the few companies offering a bolt-on turbo kit that increases a 6.2L’s horsepower from 150 hp to 220 hp, adds 115 lb-ft, and increases fuel economy by 10 percent, according to testing.
Another option is to find a 3.9L Cummins 4BT and swap that into the Blazer. Since the bellhousings for GM transmissions are available for the small diesels and their dimensions are about the same as a small-block Chevy, you should be able to drop one right in, provided you're willing to hack up the firewall a little bit for clearance.
We've seen 4BTs make as much as 200 to 250 hp with upgraded injectors and tuning only, and it’s easy to obtain the parts required to make 500 to 700 hp (if you want to push it).
While turbocharging the existing engine is probably the easiest choice, a 4BT swap would be pretty cool, too. 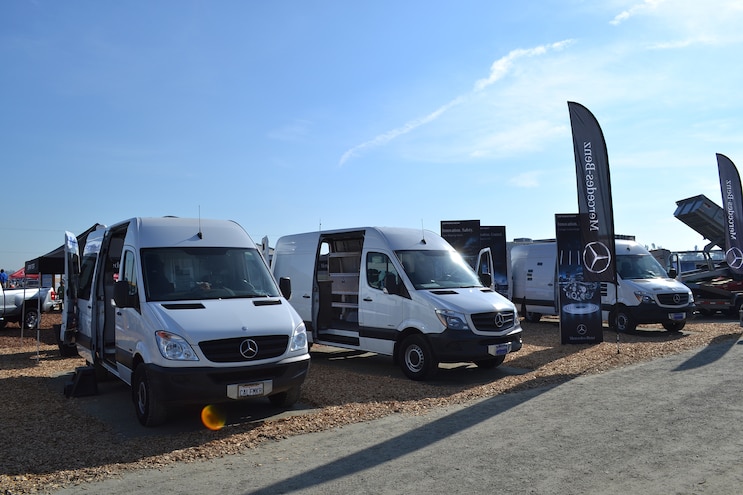 View Photo Gallery | 4 Photos
Photo 4/4   |   003 Top Tech Sprinter Van
We're not sure about the pricing in West Africa, but here in the U.S., 10-year-old Mercedes-Benz/Ram Sprinter vans can be found in decent shape for about $10,000 to $15,000. Or, you can always buy new and finance.
Wanted: Diesel Minivan
I currently own an ’03 Dodge Grand Caravan with the 3.3L V-6 gasoline engine. I am a bit attached to the minivan body style but want to go the diesel route now. Would a modern Ram EcoDiesel swap be possible?
Oscar Mensah
Ghana, West Africa
There are several hurdles that stand in the way of successfully swapping a 3.0L EcoDiesel V-6 engine into a Dodge Caravan. First, you'll be converting front-wheel drive to rear-wheel, which requires fabricating a rear axle and rear suspension. Even if you have the all-wheel-drive model Caravan, it would still be tough, and costs could be in the tens of thousands of dollars.
Another simpler, cheaper option would be to swap an entire engine cradle, along with the transaxle, into your minivan. The drivetrain of a ’90s Volkswagen Jetta diesel would be a great choice for this type of swap. The engine requires minimal wiring, and there’s a host of aftermarket parts available that can pump up the little I-4 engine’s power output to match your Caravan's existing 180hp engine.
Perhaps the easiest solution is to just locate and buy a diesel van to start with, rather than try and convert your own. The Sprinter van, which is marketed under both Mercedes-Benz and Ram, can be purchased in a low-roof passenger version, which is about as close to a diesel minivan as you're going to get. The Ford Transit is another option, although there are fewer used models out there.
Regardless of which option you choose, diesel minivans are definitely a good idea. An ’03 Caravan gets about 15 to 17 mpg, whereas a vehicle like a Sprinter can top 30 mpg, with the same amount of power and more torque!